The Winchester Model 88, introduced in 1955, is (like the Winchester Model 1873) a timeless design that has yet to lose its appeal for hunters and sportsmen. But unlike with the Model ’73, there are no modern-day copies of the Model 88. Last manufactured in 1973, they have become collectibles—and in their rare caliber and pre-64 versions very valuable—yet the hunters who own Winchester Model 88s swear by them still and, more importantly, use them. 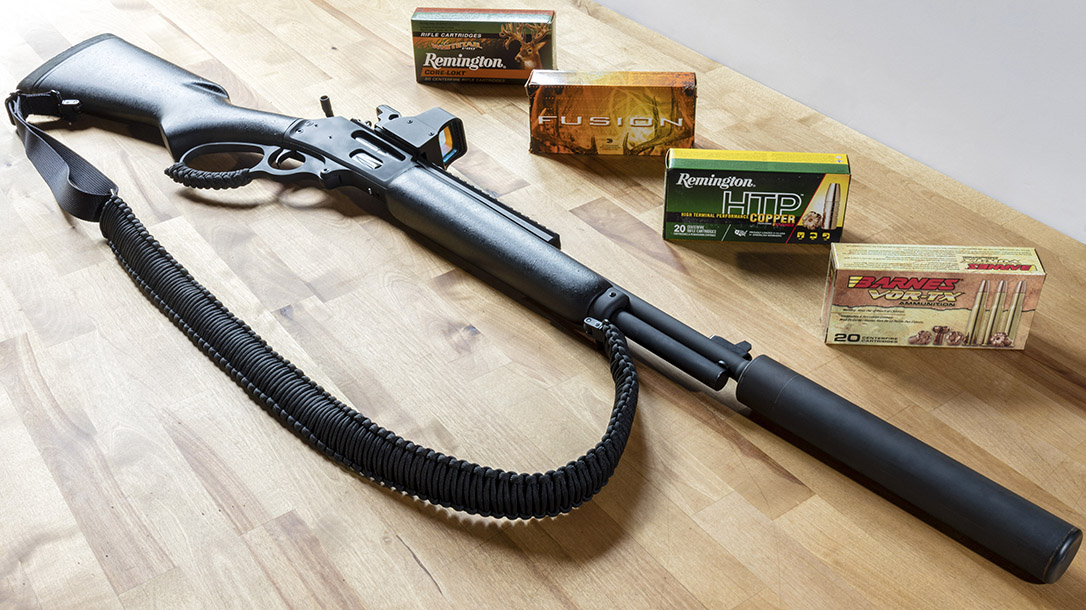 Winchester Model 88: Where It Began

In the early 1940s Winchester figured that, given America’s love affair with the lever-action, and the growing popularity of more accurate bolt-action models, the time had come to modernize its venerable 19th century models. At the time, the John Browning-designed Model 1895 stood as the only Winchester chambering a high-velocity, flat-shooting cartridge. This strong, box-magazine fed rifle fired the wonderful, pointed .30-06 Springfield round. Badly outdated by the early ’40s, Winchester discontinued the model in 1931. The legendary Winchester lever-actions remained widely known for their speed of firing. But they unfortunately lacked the strength and accuracy of modern bolt-action rifles. What Winchester needed was a modern lever-action combining the best attributes of both. If only it were so simple.

Winchester’s design team reasoned that the strength of a bolt-action mechanism in a lever-action rifle would require a rotating front-locking bolt to withstand the higher pressures of newer cartridges, and this design would also call for a solid breech similar to that used on the Savage Model 99, which would eliminate the possibility of gas blowback into the shooters eyes should a cartridge case fail. Additionally, intended as a sporting gun, Winchester considered adding a scope mounting option. This dictated a receiver with side ejection, with the ejection port sealed off with the action shut to keep dirt and foreign objects from entering the mechanism. Further compounding the issue, the rifle’s traditional lever-action tubular magazine forbid the use of newer cartridges with pointed bullets. This necessitated the design of a cartridge box or clip-type magazine (the Model 1895 became the first Winchester lever-action to feature a box magazine).

To achieve a higher level of accuracy, Winchester discarded its traditional two-piece stock in favor of a more rigid, one-piece design. Factory engineers also wanted this new repeater to operate much faster, so they developed a short throw lever. Lastly, they decided to top things off by combining the lever and trigger assembly. These two changes enabled the action to cycle much faster, with the shooter’s finger never coming off the trigger.

All that remained was to design a rifle that could do all of those things! It’s a tall order, even by today’s standards, and all of this was happening in the 1940s. The Model 88, lacking a working mechanism, remained just a concept until the early ’50s, when a young man named W. D. Butler, Winchester’s assistant manager of Arms and Ammunition R&D, was assigned the job as designer. The development program was given top priority, receiving attention 16 hours per day, seven days a week.

Butler and his team achieved their goal. The Model 88’s entire trigger assembly cycled with the lever as one unit. A reversible cross-bolt safety was located in the front of the triggerguard. The action was equipped with several safety features to avoid premature or accidental discharge with the mechanism open. The bolt had a separate rotating head with three lugs that locked into the front of the receiver. The closed breech of the receiver, which gently curved to flow with the stock, guarded against escaping gasses in the event of a case failure or ruptured primer. The receiver featured side ejection, and the solid top was drilled and tapped for scope mounts. The left rear side of the receiver was even drilled and tapped for a Lyman 66W-88 peep sight.

For loading, Winchester devised an easily detachable clip-style magazine that held four cartridges. A fifth round loaded into the chamber. The clip release mechanism resided at the front of the magazine well. It activated with even a gloved hand. The smooth, tapered Winchester proof steel barrel measured 22 inches in length. It came fitted with a Winchester No. 103C beaded, ramped front sight with a removable hood and a Lyman No. 16A adjustable folding-leaf rear sight. The rifle measured 42 inches overall and weighed an incredibly light 6.5 pounds.

Another novelty was the rifle’s caliber: The Model 88 was chambered in company’s latest cartridge, the .308 Winchester. This was the Winchester-Olin commercial version of the brand-new 7.62mm NATO military cartridge, better known in the 1950s as the T65 Army.

The .308 Win was an ideal caliber for deer and other large game. Its ballistics were almost equal to those of the .30-06 Springfield, but its case length was a full half-inch shorter, making it perfect for a short-throw, lever-action rifle.

Among the early reviewers of the Model 88 was the legendary author and firearms specialist Elmer Keith, who called the rifle “just right for snap or running shooting.”

“The rifle handles as fast as a shotgun,” Keith wrote. “We take our hats off to the Winchester engineers for giving us a super-accurate front-locking lever-action.”

By the 1957-58 production run, Winchester made most of the engineering changes and improvements found on the later-issue Model 88. The most noticeable was the redesigned recoil lug at the rear of the receiver. The original “three-bumped” shape changed to a rounded contour, eliminating a tendency for cracking around the narrow finger of the original lug. Though not as aesthetically pleasing, it solved one of the Model 88’s few significant problems.

Winchester dropped the .358 Winchester from the lineup in 1962. Recurrent chambering problems reportedly the reason, but lackluster sales might have contributed. In 1963, Winchester introduced a completely new cartridge specifically designed for the Model 88—the .284 Winchester. The company wanted a more powerful round, packed into a short action, with ballistics comparable to the .270 Winchester. The .284 incorporated a rebated rim. Possessing the same .473-inch rim diameter as the .308 Winchester and .30-06 Springfield, the .284’s case diameter at the base, expanded to .5 inch, increased powder capacity. It became the most powerful cartridge available in the Model 88. The .284 Winchester proved to be an extremely accurate and flat-shooting round—in essence, the first non-belted, short magnum cartridge.

The longer, fatter case of the .284 prompted several design changes in the Model 88. First, Winchester lengthened the receiver’s ejection port approximately .25-inch at the front. This exposed a small portion of the rotating bolt head not visible on earlier versions. Also, by the early ’60s, the clip magazine changed, redesigned with caliber numbers now stamped on the front end. The earlier flat-bottom version with a de-bossed arrow gone, dismissed in favor of a fancier, stepped design with embossed arrow. The capacity of the .284 clip was three, making with one in the chamber a total capacity of four—one round less than that of the .243 and .308. Of the various Model 88s produced, the “pre-’64” cut-checkering version .284 is today the most rare, with only 2,925 made in 1963.

Not specifically limited to the Model 88, the pre-’64 designation popularized by gun collectors is used in reference to other Winchester models built prior to 1964. Most notably, the look of the Model 88 changed after 1963. The traditional cut checkering disappeared in favor of a new style called impress checkering, done to speed up manufacturing and cut production costs. It appeared on all Winchester rifles, and all but the most expensive shotguns, with patterns varying from somewhat plain to very elaborate.

The design on the Model 88 is known as the “basket weave with oak leaf” motif, which appears on the pistol grip and forearm as well as on the underside of the forearm. It was and still is very pleasing to the eye and provides a very comfortable grip. This design of checkering remained unchanged to the end of Model 88 production. The nylon diamond checkered butt plates remained the same throughout the model’s entire production run, although some have been seen with the Winchester name embossed in the middle. The steel grip cap was changed slightly in 1964. It was still done in the same raised style, but was altered to incorporate an insert with the red Winchester “W”logo.

As with many successful Winchester lever guns, it was inevitable that the 88 would eventually appear in the more compact carbine configuration. In 1968, some 13 years after the Model 88’s introduction, a carbine version finally arrived on the scene. Not simply shorter, the 19-inch barreled version carbine came with a uniquely designed, plain, un-checkered walnut stock. Exhibiting a smoother, heftier feel than the rifle, the carbine further differentiated by way of a wide semi-beavertail forend. The 88 carbines used the same sights as the lever-action. However, they came with a barrel band–straight from Winchester lever-action lore–with an attached front sling swivel.

The quick-handling Model 88 carbine next came in the three remaining calibers: .243, .308 and .284 Winchester. However, in 1970, after only three years of production and 7,000 88s made, Winchester dropped the .284 chambering. Two years later Winchester discontinued the 88 carbine altogether after five years in production. Winchester produced more than 28,000 in total from 1968 to 1972. Of all the Model 88 Winchesters, the .284 carbine comprises the second-most rare variation produced.

The End Of The Road

In the waning months of 1972, Winchester eliminated yet another caliber had from the Model 88 line, the .284. Production continued in the remaining .243 and .308 Winchester calibers for only one more year. At the end of 1973, after 19 years in production, Winchester discontinued the Model 88.

Throughout the entire production run, from 1955 to 1973, Winchester manufactured approximately 284,000 Model 88s. Many traditionalists don’t care for the look of the Model 88, but fans love it for its unique form and incredible out-of-the-box accuracy. All said and done, the special combination of high-quality craftsmanship and limited quantity help make a firearm unique and collectable. The Model 88 certainly qualifies.

In 1963, the last year for the handcrafted Pre-64 Model 88 rifles, the .284 Winchester, a new cartridge specifically designed for the Model 88 debuted. A more powerful round with ballistics comparable to the .270 Winchester but packed into a short action, the .284 incorporated a rebated-rim. It featured the same rim diameter as the .308 Winchester and the .30-06 Springfield, measuring .473 inch. The case body diameter at the based expanded to a full half-inch, thus increasing power capacity.

This became the most powerful cartridge available for the Model 88. The .284 Winchester proved to be an extremely accurate and flat shooting round, in essence, the first non-belted, short magnum cartridge. The capacity of the .284 clip was three, with one in the chamber, one less than that of the .243 and .308. For collectors on the lookout for the best Model 88, especially for rarity, the Pre ’64 cut-checkering version .284 remains the rarest. Winchester produced just 2,925 in 1963.

Find out more about collecting Winchester rifles at winchestercollector.org. This article first ran in the Winter 2022 issue of American Frontiersman. Get your copy today at OutdoorGroupStore.com.