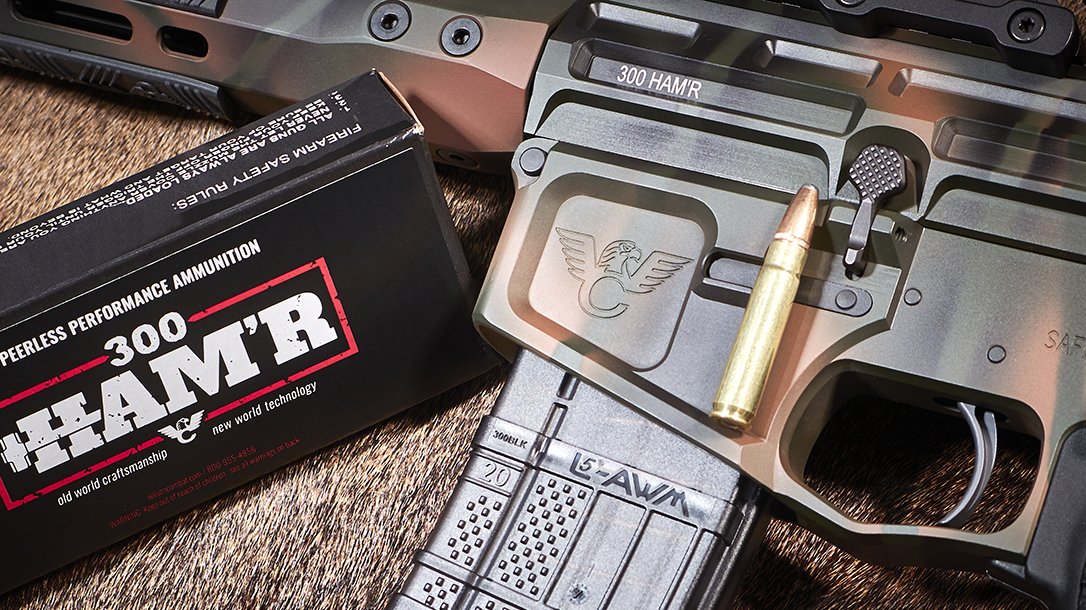 1 of 3
Photo by Terrill Hoffman
Wilson Combat 300 HAM’R
“In my humble opinion, the development of the 300 HAM’R has finally allowed the AR-15 to reach its maximum potential.” 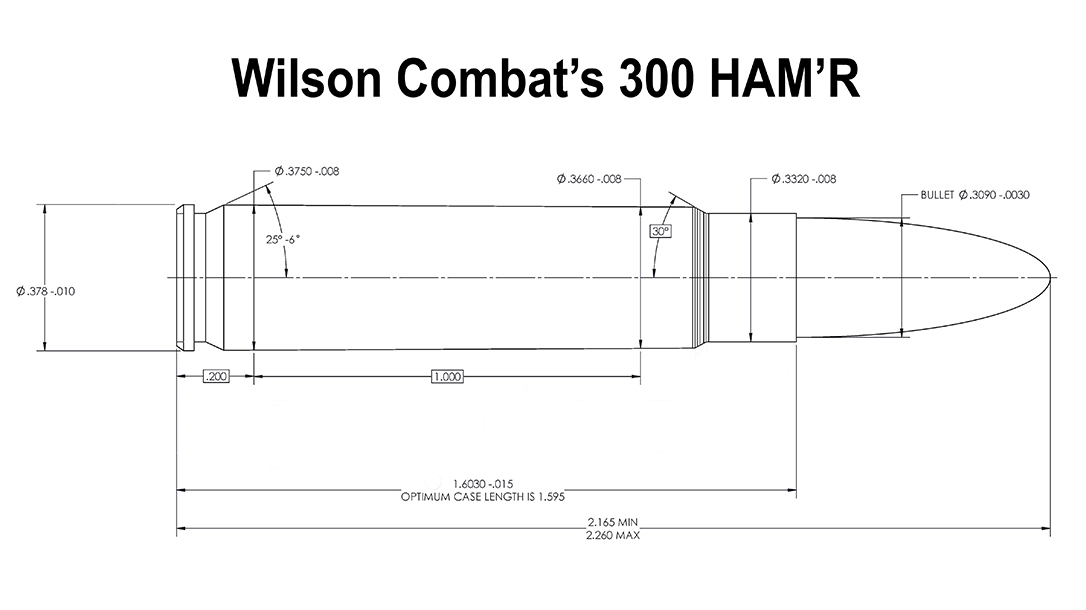 2 of 3
Photo by Terrill Hoffman
Wilson Combat 300 HAM’R
The overall length of the cartridge is 2.260 inches, which was dictated by the bullet selection and the AR-15 magazine. The case has a maximum length of 1.603 inches. 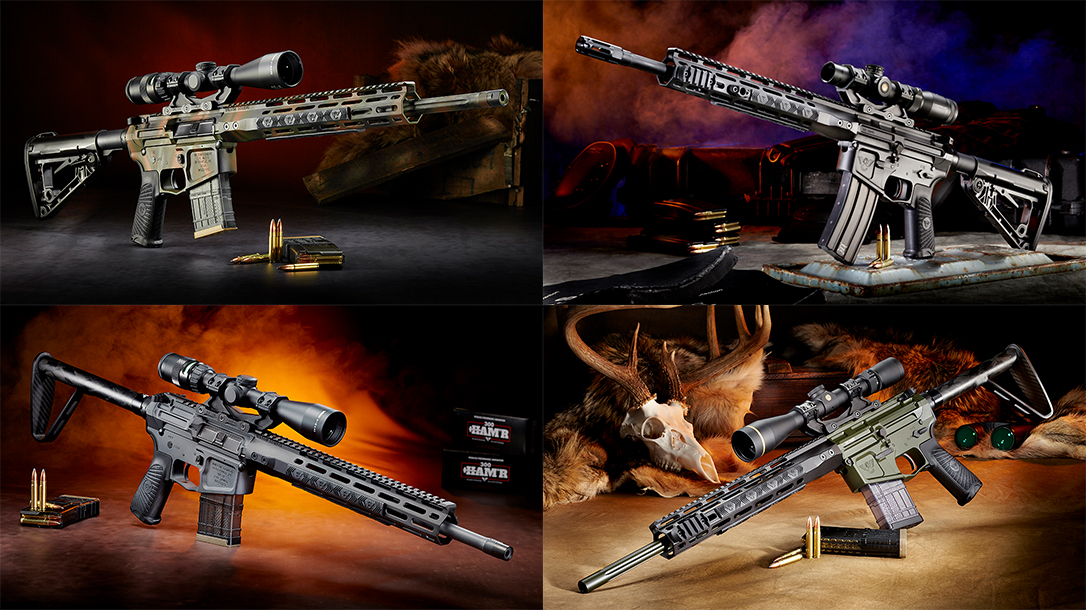 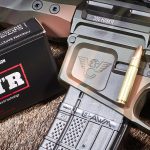 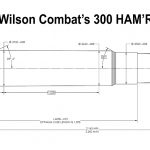 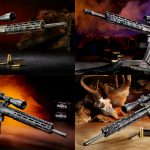 The following piece on the Wilson Combat 300 HAM’R cartridge is from an article in the upcoming winter 2019 issue of Ballistic Magazine. Read the entire story when the winter 2019 hits newsstands Oct. 9. Grab your copy or subscribe at OutdoorGroupStore.com.

There are times when we do something just because we can.

The majority of those acts could be considered frivolous and are normally preceded by the statement, “Hold my beer and watch this!” But every now and then, there is a true purpose behind an action and the results can be very notable. 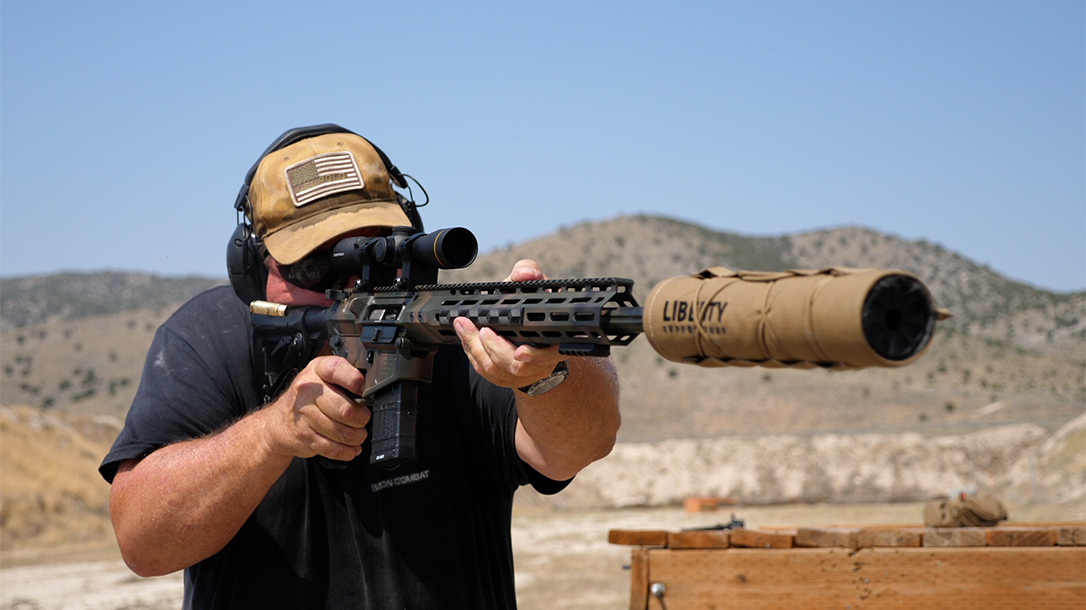 Ballistic Magazine is honored to give you an inside look at the “Who, What, and Why” aspects of the new Wilson Combat 300 HAM’R cartridge.

First, if there is any company qualified to bring out a new AR base cartridge, it’s Wilson Combat.

Wilson is a leading authority on the AR platform. It currently produces AR-15, AR-10 and AR-12 (Wilson’s own mid-sized pattern) rifles, as well as its AR-9 carbine. The quality of its products is legendary. If you want a top-end AR, Wilson is the first place to look.

Wilson Combat can also supply a rifle in any production chambering you can imagine. Check out the Wilson website and you’ll notice they have recently included the .224 Valkyrie and the .458 HAM’R to its product line, for a total of 21 chamberings for the AR platform. I guess with the advent of the 300 HAM’R, it is time for a website update.

Before we can fully understand the “What?” aspect of the 300 HAM’R, we need to study a little history and comprehend the “Why?”.

If we went back in time 124 years, this article would be singing the praises of the new Winchester Model 1894. Just one year later, the .30 WCF cartridge — later known as the .30-30 Winchester — hit the market. This rifle/cartridge combination propelled the “94” lever-action to the position of the ultimate utility rifle.

Yet, when you look at the sales figures over the past decade, it would seem as if the AR-15 has made its move to dethrone the “94.”

There is only one problem with that concept: Most ARs are chambered for the 5.56/.223 cartridge. The numbers don’t lie, and the .223 Remington just isn’t up to the task of going head-to-head with the .30-30 Winchester.

There are some chamberings for an AR that surpass the power level of the .30-30. However, most of them are in the heavier AR-10 models. Those in the AR-15 platform are limited in capacity. There just isn’t an AR-15 that can be deemed the “perfect” all-around utility weapon.

If these statements lead you to believe that I’m not a fan of the AR-15, let me correct that thought. I have several. And it is an AR-15 that I keep nearby “just in case,” as my lever-actions are nicely tucked away in a gun safe.

I’ll even go as far as saying the .223 Remington cartridge may have some merits, it’s just not my choice for a go-to cartridge.

For the past seven years my “grab-it-now” AR has been chambered in 7.62x40mm WT. Why? So I can take advantage of the energy increase while still maintaining reliability, capacity, and accuracy. Those are the same reasons why a new AR is now sitting next to my desk, and this is where Bill Wilson’s concept of “because we can” comes into the picture.

As an extension of the HAM’R series of rifles, the 300 HAM’R is designed to maximize the capabilities of the AR-15 for hunting, self-defense, and target practice; in other words, terminal performance, capacity, and accuracy.

Even though the Wilson Combat 300 HAM’R is a new cartridge, it is the result of a 13-year quest by Bill to find the perfect all-around hunting rifle for medium-sized game, while at the same time optimizing the AR-15 as a defensive weapon.

The search saw Bill testing everything from the .300 Whisper to his own 7.62x40WT.

At best, the Whisper was a compromise from the start. You have a choice of velocity or mass, but you can’t have both. Nor will the twist rate for the sub-sonic heavy weight bullets compliment the use of lighter bullets needed for supersonic velocities. If you’re looking for a suppressed sub-sonic rifle, the Whisper may be for you, but it is a far cry from being an all-around utility rifle.

Before you even mention the 300 Blackout, just re-read the preceding paragraph.

Next on the table was the 6.8 SPC, which performed very well. However, Bill really wanted the added diameter and variety of projectiles offered in .30 caliber.  Remington brought out the .30 Rem. AR, but it had its own problems. Even Remington has given it up. Besides, even if you don’t mind the proprietary parts, the lack of capacity knocks it out of the running for a defensive weapon.

There have been other cartridges included in the testing, but none of them were equal to the task.

About seven years ago, Wilson Combat worked with Kurt Buchert to bring the 7.62x40WT to the marketplace. We finally had a cartridge that was approaching the performance of the 30-30.

I will admit that I have been the 7.62x40WT’s biggest fan, but Bill thought there was room for improvement. He prepared to take on the task, because he could.

For the sake of full disclosure, Bill designed the 300 HAM’R, but he allowed me to “ride along” during the process. He knew I had been an ardent advocate of the 7.62x40WT. Not to mention, I have a trait of giving my opinion even at times when it isn’t wanted. As he would tweak this or that aspect of the design, I was able to follow each move and test the results.

In my humble opinion, the development of the 300 HAM’R has finally allowed the AR-15 to reach its maximum potential.

Before we look at the details of the Wilson Combat 300 HAM’R, there is a major detail that must be mentioned: The 7.62x40WT was the starting point for the 300 HAM’R, but the new cartridge was designed as a total package. The brass, powder, powder charge, primer and bullets were all chosen to optimize performance. No one aspect was set in stone at the onset and each element was reviewed for its contribution to the total project.

The parent case is the .223 Remington necked up to accept .30 caliber bullets in the 110 to 150 grain range. When compared to the 7.62x40WT, the new cartridge is longer and the neck angle slightly altered.

The overall length of the cartridge is 2.260 inches, which was dictated by the bullet selection and the AR-15 magazine. The case has a maximum length of 1.603 inches.

Wilson selected a 30-degree neck angle. Wilson slightly decreased the case taper from the .223 to maximize case capacity. Although cases can be formed from .223 Remington brass, 300 HAM’R head-stamped brass is available from Starline Mfg. I must compliment Starline for its contribution to the project and its willingness to strive for the best results.

There are currently 16 different bullets deemed suitable for the 300 HAM’R from five different manufacturers. The weights vary from 110 grains to 150 grains. They were all chosen for their accuracy and terminal performance, as well as having a profile that would work with the extended case length.

The most suitable powders tested for the 300 HAM’R were Accurate 1680, Shooters World Blackout and CFE-BLK by Hodgdon. All three gave good accuracy and increased velocity, but it was CFE-BLK that developed the best combination of velocity and accuracy at a much lower pressure rating.

It should be noted that Wilson Combat and HSM are offering loaded ammunition. Black Hills Ammunition is planning to add the cartridge in late 2018.

Wilson Combat is carrying Lee and RCBS loading dies for the hand-loaders, as well as headspace and bullet seating depth gauges. Wilson is also providing complete loading data for the new cartridge on its website. 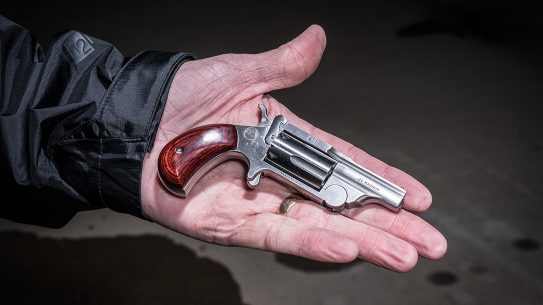 With its top-break design, the North American Arms Ranger II Mini-Revolver comes through as...

Operation Eagle Claw: The Failed Attempt To End the Iran...