I’ve been accused of being many things, but I will readily admit to three: I’m a hunter, a wine nerd and a fair-to-middlin’ cook. Regarding the wine nerd, “oenophile” sounds so much better, but more than once I’ve had friends chide, “A wino by any other name is still a wino.” I’ll gladly answer to all three. And wine pairings are somewhat of a specialty of mine. 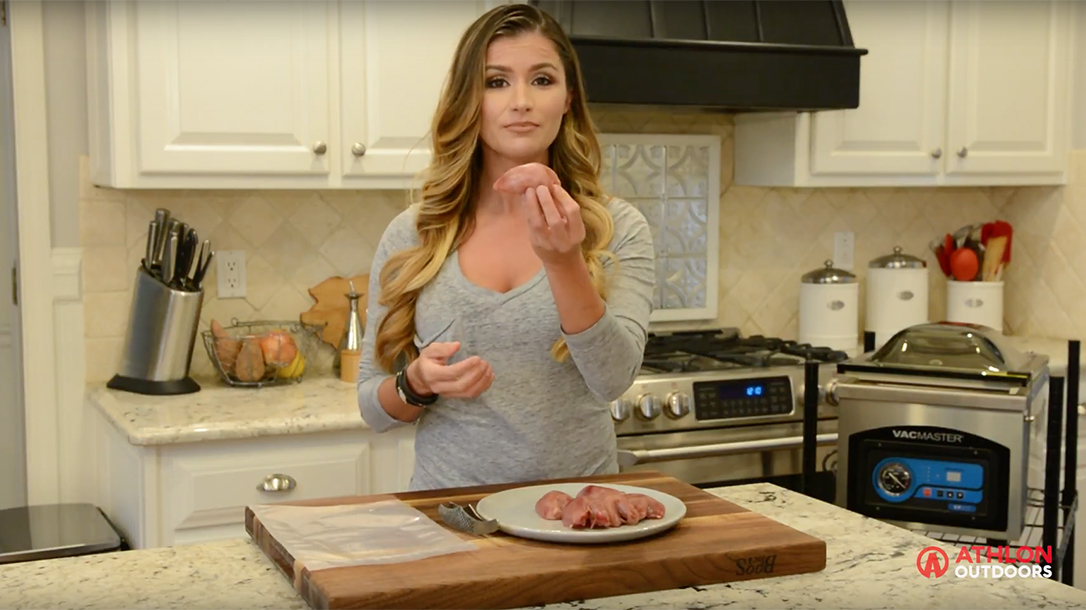 Anyway, during my 50 years as a gun writer, I’ve been privileged to have hunted throughout the world, and in so doing I have eaten every kind of game meat, from moose nose to buffalo tongue, ostrich to crocodile. You name it, I’ve eaten it—or at least given it a try.

But that was weird stuff. Most hunting camp fare is what you’d expect: Roasts, steaks and chops from deer, moose, caribou, mountain sheep and others, and it’s all pretty damn good. And it can be even better later, at home, where you can lavish more attention to its preparation and presentation. But just to let you know where I’m coming from, I’ve yet to experience any game meat that to my taste rivals a well-marbled angus ribeye.

So, with that caveat, coupled with whatever wine knowledge and cooking skill I’ve developed during a half-century, let me suggest five of what I’ve found to be great, if not classic, game and wine pairings. 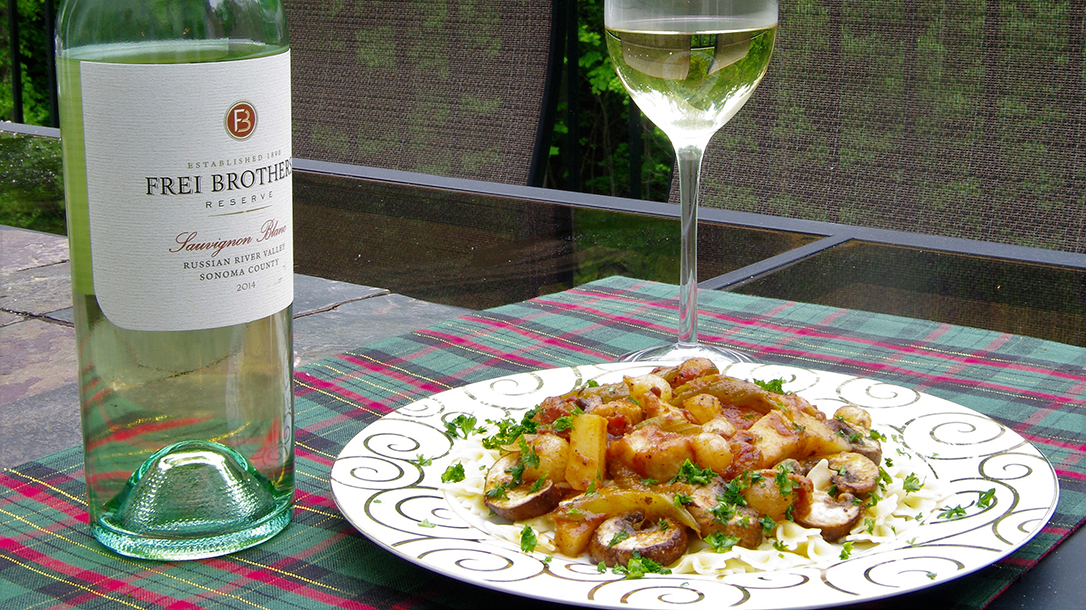 Because all game meat doesn’t come from animals with four feet, I thought the avian world should be represented. Coq au vin is a classic French dish normally made with chicken (a coq is a rooster) and red wine, usually a Burgundy or pinot noir. Substituting pheasant thighs and breast meat is hardly a compromise, as I think it imparts a more assertive flavor to the dish.

As for substituting a white for a red, I suppose some would consider that heresy, but I just didn’t like the reddish hue that red wine imparts to white meat. It was strictly a visual thing with me, so I started making coq au vin with chardonnay. It was good, but then I tried it with sauvignon blanc, and it was better because of its higher acid level.

Like all classic recipes, you can be creative with ingredients, but only to a point. The must-have ingredients are carrots, mushrooms, thyme, chicken stock, tomato paste, cipollini or pearl onions, brandy or cognac, bacon or pancetta and, of course, the braising wine, which should be the same as what you’ll be drinking with the meal. Some recipes call for celery, fingerling potatoes or tomato paste. You’re the cook.

For presentation, I like to serve pheasant au vin on a bed of orzo, but egg noodles or farfalle are also good choices if you would prefer those.

As for the wine pairing, if you prefer a less assertive one—that is, less herbal—go with a sauvignon blanc from California. One of my favorites is the affordable Kendall-Jackson. That’s one of the beauties of sauvignon blanc—there are many excellent ones that can be had for less than $20. Another of my highly affordable favorites is Frei Brothers. For those who prefer a more assertive, herbaceous wine, go with a sauvignon blanc from New Zealand. Two of my favorites are Kim Crawford and Cloudy Bay, both of which are priced at about $20. 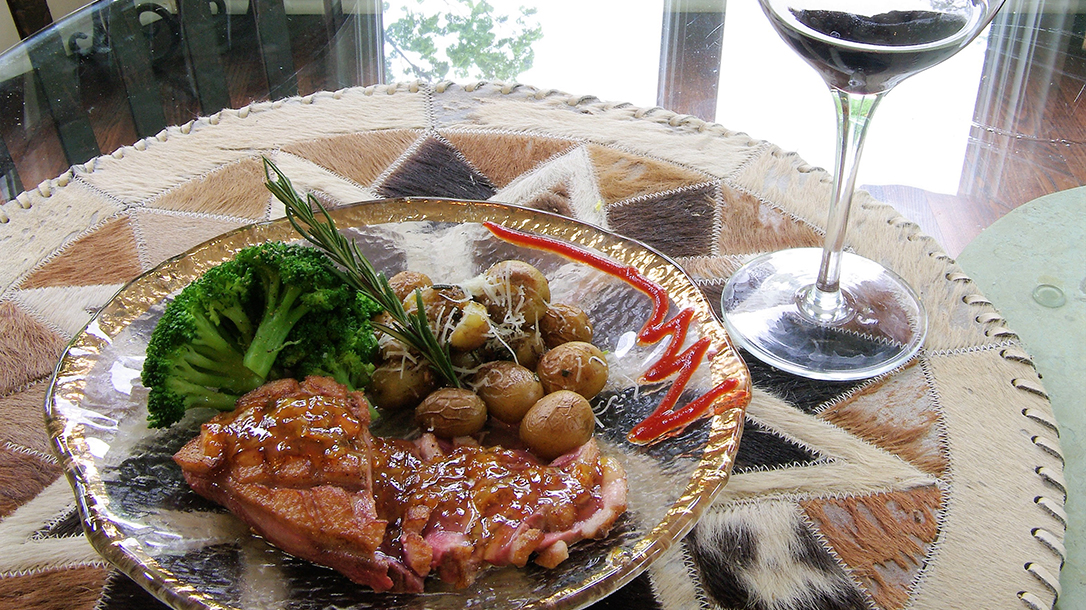 Any excuse for drinking Amarona della Valpolicella works for me, as it is one of my favorite wines in the world. Amarone is made from the same three grapes that comprise what I consider to be the Italian version of beaujolais: Valpolicella, which comes from the Veneto region of northeastern Italy. It is a complex wine that is the result of the time-consuming and labor-intensive practice of drying the grapes on straw mats for several months to concentrate their sugar level before fermentation. The result is a high-alcohol yet low-tannin red wine with a bouquet of flowers and roses.

To me, Amarone and duck breast, particularly when accompanied with an orange sauce, is a marriage made in heaven. It goes without saying that domestic duck can be used in place of a mallard, black, pintail or whatever wild puddler you’re lucky enough to bag. Prepping consists of simply scoring the skin side of the breasts in a crosshatch pattern and browning them in extra-virgin olive oil skin side down in a skillet, preferably a cast-iron one. This renders the fat and crisps the skin.

With the breasts set aside, a reduction sauce of orange juice and zest, combined with a tawny port or Marsala, completes the picture. Orange marmalade also works. The breasts are then returned to the pan and brought up to temperature before serving. In all, it’s an elegant dish that is still quite simple to make. For a sweeter sauce, use ruby port or cream sherry.

I like to serve this dish with fingerling potatoes tossed in extra-virgin olive oil and baked with rosemary and garlic. And for a veggie, you can never go wrong with broccoli.

Unfortunately, Amarones are relatively expensive in that they start at about $40 and go up—way up. But don’t buy the least expensive you can find if you want to really know what makes this wine so great. Two of my favorites are Tommaso and Allegrini, both of which average about $65. A more economical alternative would be a Valpolicella Ripasso, which is often referred to as a baby Amarone. It’s made from the same grapes and sells for $15 to $20. 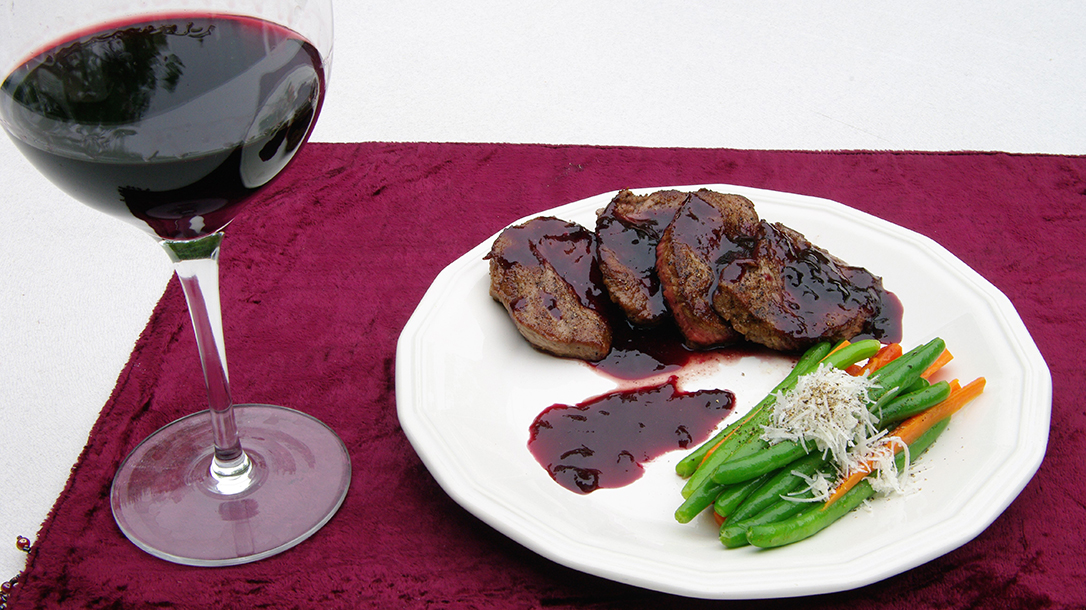 There are many red wines out there that go well with venison (or elk and moose), and depending on how it’s prepared, perfect pairings can range from pinot noir to zinfandel.

Of the various cuts, my favorite parts of a deer are the tenderloin and backstrap. They’re the least gamey and the most tender. Like my other choices here, this recipe is simple and easy to prepare. The meat is seasoned and then placed in a red wine/dijon mustard marinade for at least five hours. Patted dry, it’s then pan-seared in half butter, half extra-virgin olive oil until nicely browned on all sides but still medium rare. With the meat aside covered in foil, the pan is deglazed in chicken stock and reduced. Then, blackberry jam and Marsala are added and reduced again to where it thickens to a proper demi-glace. This simple preparation can be accompanied by any vegetable, but I like to combine haricot verts with julienne carrots. Not only is it a good combination, but it also adds much needed color to the presentation.

As for the wine, I prefer a California cabernet, preferably from Napa, but a blend rather than a 100-percent cab. Unless well aged, which adds cost, I often find pure cabs, especially young ones, to be too tannic. I prefer various combinations in which merlot, cabernet franc, malbec and petit verdot, to name the more common wines used for blending with cabernet sauvignon, are used to soften the wine and bring it to drink-ready status much sooner. One exception, however, is Justin’s Paso Robles Cabernet, which is 100-percent cabernet sauvignon. It’s one of my favorites, yet at about $25, it’s affordable. Others I would highly recommend in the $25 to $40 price range include St. Supery and DAOU Vinyards. 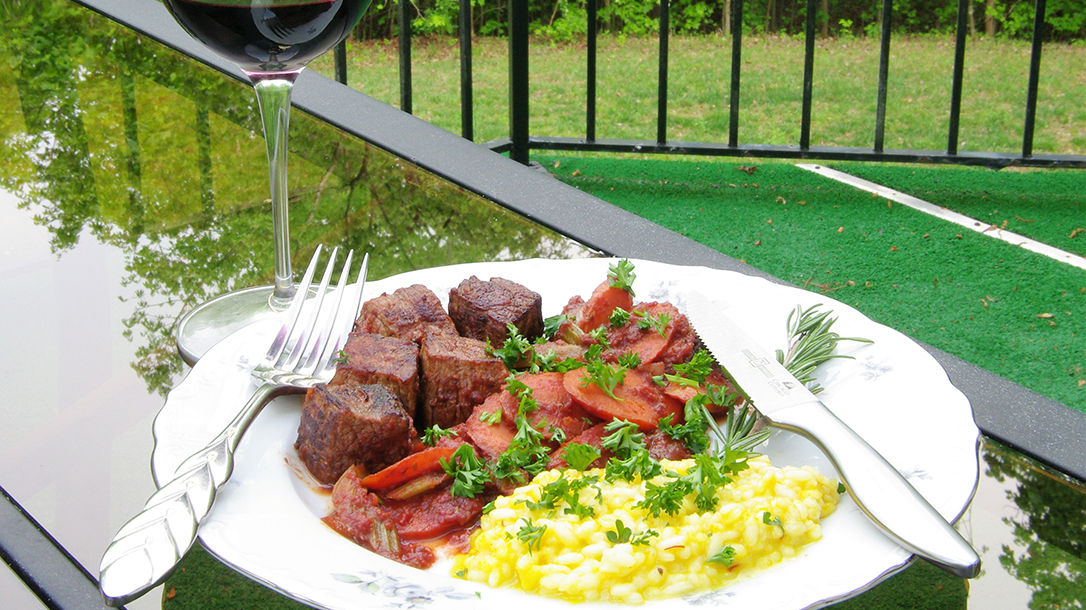 One of my favorite dishes is the Italian classic osso buco, which is veal shanks braised in a 50/50 liquid comprised of white wine (I use pinot grigio) and chicken stock. Slow simmering for three hours makes what would otherwise be an almost inedible piece of meat into one that falls off the bone it’s so tender. I substitute chunks of moose, elk or deer hind-quarter meat, which is the cut normally use for roasts. The only compromise is that the succulent bone marrow, considered the heart of osso buco, is missing with this dish. What isn’t missing, though, is tender meat that has little gamey flavor and a very flavorful sauce.

Osso buco recipes can be relatively complicated, but like all classic dishes, it has several must-have ingredients, including celery, carrots, onion and tomatoes—preferably San Marzano. There are many recipes out there, so pick the one you like best. The one I’ve developed calls for anchovies and a little splash of sherry.

I start with 1.5-inch cubes, which I season and flour (the flour helps thicken the final sauce). Then, I thoroughly brown them in extra-virgin olive oil to get that precious crud that forms on the bottom of pan which, when deglazed with the wine and stock, lends so much flavor to the sauce. At this point, simply follow the recipe you’ve chosen. All will typically specify simmering for at least two and a half hours.

A classic accompaniment to osso buco is risotto Milanese, and that’s what I usually serve with it. Plain rice, mashed potatoes or noodles also work well as side dishes.

To stand up to this hearty dish, you need a wine with a spine. A California zin fills the bill nicely. Zinfandel is another wines you don’t have to spend a lot of money on to get a good one. A couple of real bargains are Ravens Wood and Cline, both of which sell for less than $20. If you want to spend a little more, I highly recommend the Fugitive and Prisoner. Both are excellent examples of how good zin can be. In fact, unless you have a very educated palate, many zins can pass for cabernet sauvignon and vice versa. 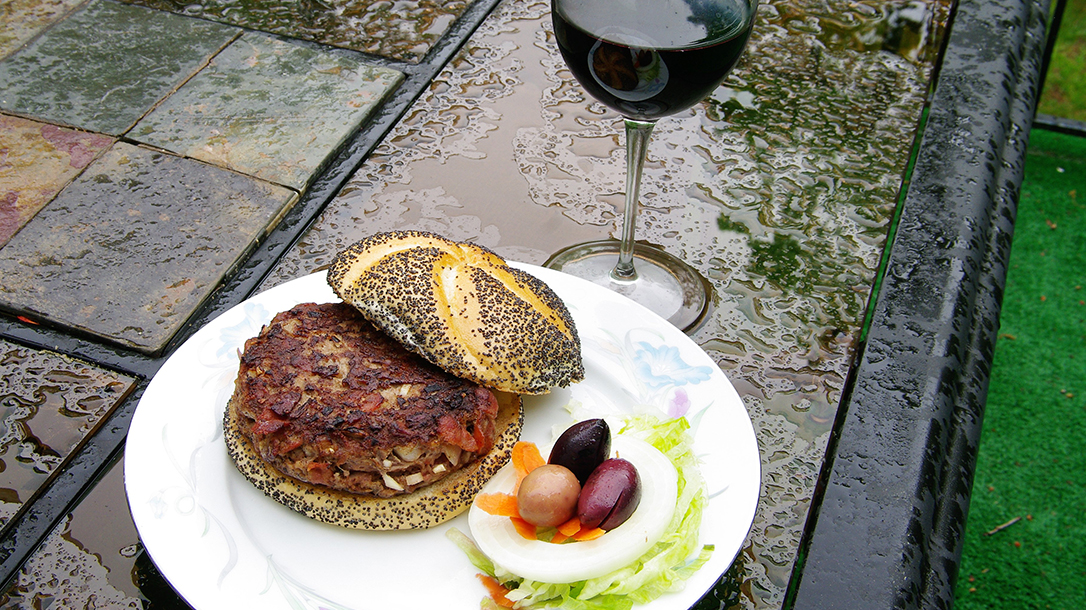 These tasty burgers definitely qualify as comfort food. They are so easy to make that I’ll include the entire recipe here. And moose, elk, caribou and even antelope are usable instead, though I find the latter to be too sagey for my taste.

To 1 pound of ground venison, add:

Mix all of the ingredients, season with salt and pepper, and form into burgers. I prefer to grill with charcoal for the unique flavor it imparts. However, a gas grill is acceptable, as is a cast-iron skillet. And if you add a slab of cheese, no one will call the burger police.

I find that pinot noir makes a perfect match. However, it’s by no means the only wine to accompany these succulent burgers. I prefer the more assertive pinot noirs from the Willamette Valley of Oregon. I find them to be more characteristic of French Burgundy than those of California. Three of my favorites are Four Graces, Elk Cove and J. Christopher.