A little more than a year ago I had the opportunity to be one of the first to shoot the Walther Q5 Match pistol during the product launch event at the U.S. Shooting Academy in Tulsa, Okla. It was mid December. The cold, damp air had many huddling in tents and around the base of the tall propane heaters like fungal growths. The weather suited me just fine, as it meant the line to shoot the course was always short, and I couldn’t get enough of the new pistol. 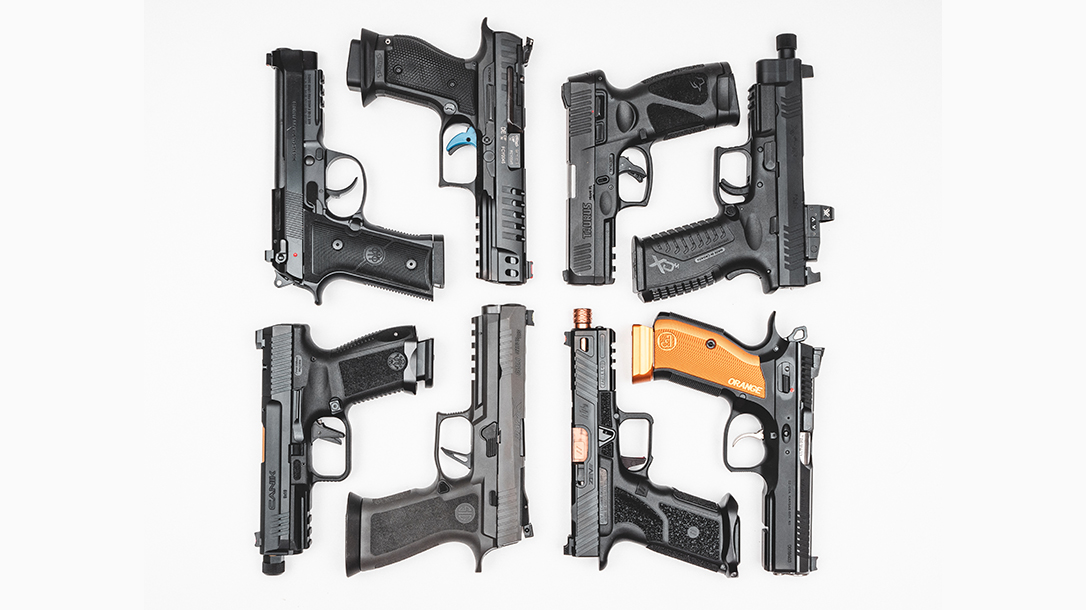 I was impressed enough with the pistol to find a home for one in my safe shortly after. Shooting the Q5 Match was unlike any pistol I had previous experience with. Until a few days ago, that is, when I shot it’s little brother: the Walther Q4 Steel Frame.

Well, no. It has more to do with weight. And not just weight, but, more importantly, the balance of that weight.

The Q5 Match Steel Frame weighs 41 ounces. Meanwhile, the new Q4 Steel Frame weighs 40 ounces. Keep in mind it has one inch less of barrel, slide, and frame, not to mention the smaller Duty Optimized Beavertail. A shorter overall length with basically the same weight might make one think that the balance would be thrown off, but I didn’t notice that at all on the range.

When I asked Vince Mann from Walther about the balance, he made a point to tell me that the Q4 Steel Frame “is not just a cut down version of the Q5. It’s been re-engineered for balance and weight distribution.” Then he dropped the mic and walked away.

If you want further explanation, you will have to ask one of Walther’s engineers, but for me the proof is in the pudding. The Q4 Steel Frame feels perfectly balanced, shoots soft, and gets back on target fast. It lets the shooter take advantage of the crisp break and short reset of the Quick Defense Trigger that Walther is famous for.

Since the release of the PPQ, the Quick Defense Trigger has been said to be “known as the best striker-fired trigger by nearly every critic,” according to Walther. Since I am not in a position to state the opinion of nearly every critic, I am going to take Walther’s word on that. But I do know this: It is the best out-of-the-box striker-fired trigger I have experience with. It is a two-stage trigger with a smooth first stage, followed by a distinct wall, then a clean break with a very short, snappy reset. According to the literature, the length of the reset is only 0.10 inches.

This made me curious, so I took some time to measure the trigger on my Q5 (same trigger). I found that, at the lowest point on the trigger, I could consistently get it to break at just more than an eighth of an inch. Because of how the levers work, and the fact that nobody presses a trigger from this point, this would put that 0.10-inch break distance right about in the upper-middle of the trigger face. Score one for Walther. What does all this mean? It means faster, more accurate and consistent shots on target. But trigger pull is only one of the aspects of how a pistol handles.

Grip geometry is just as important as trigger performance and proper balance when calculating shootability. Great ergonomics and grip design let Q4 Steel Frame shooters got on target naturally and quickly; it’s a comfort level that has to be felt to be understood. If you were to stand around Walther’s range table at SHOT Show, you wouldn’t have to wait long to hear someone say something along the lines of “this feels really good” after picking one up.

The deep undercut and rounded grip inherent in Walther pistols just fall right into place as soon as you put it in hand. The Duty Optimized Beavertail, as mentioned before, supports a good, high grip placement. However, Walther shortened it with the Q4 Steel Frame to allow for use in duty retention holsters. Walther also removed material around the edges to promote more comfort and less printing when carrying appendix IWB.

The Performance Duty Texture, with its tetrahedron design, maintains your grip in the most extreme of conditions without being too aggressive on skin or clothing while appendix carrying. These features, combined with the oversized, reversible magazine release button and recessed ambidextrous slide release, make shooting and manipulating the Q4 Steel Frame a true pleasure.

The Q5 Match Steel Frame is an incredible gun. Its shorter brother, the Q4 Steel Frame, is just as incredible. It’s a well-balanced, accurate, fast, smooth-shooting pistol. It has all the modern features that consumers come to expect from a high-end carry pistol: Great trigger, great ergonomics, optics options, all in a great looking package. Yes, it is heavy … but some guys are into that.

Walther set out to, in the words of Vince Mann, “bring a gun to the market that combined duty and performance.” I think they hit it out of the park on this one. For more information, please visit WaltherArms.com.