I am a fairly savvy amateur student of international affairs. I spent eight years as an Army officer and left the military with a low-grade addiction to geopolitics. Had you asked me a month ago to describe the President of the Ukraine I would have simply said he was a TV comedian whose name I couldn’t hope to spell. My, what a difference a month makes. 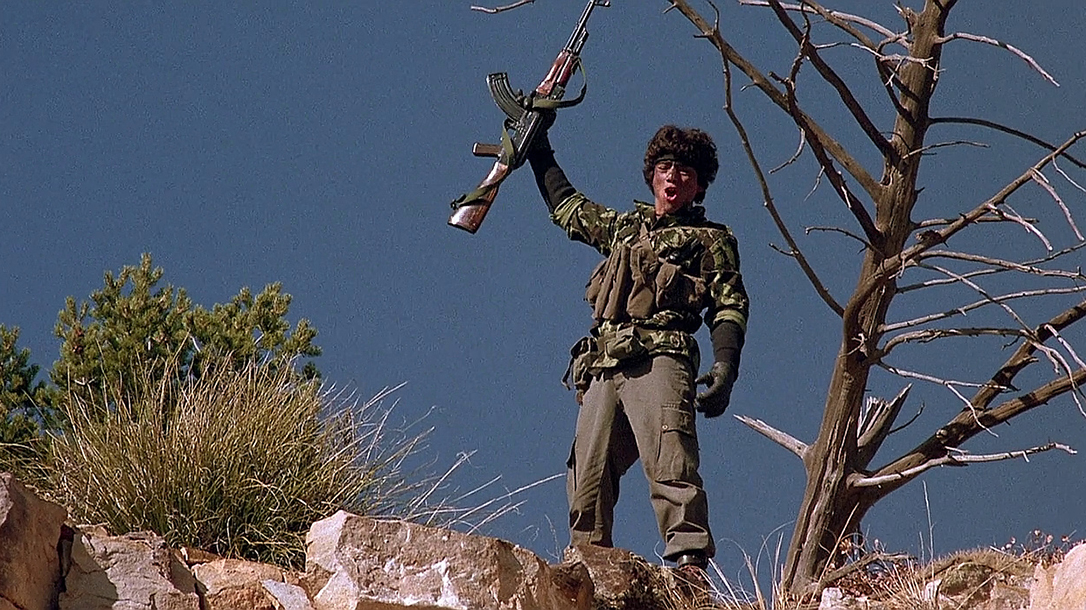 Volodymyr Oleksandrovych Zelenskyy was born on January 25, 1978. His father heads the Department of Cybernetics and Computing Hardware at the Kryvyi Rih State University of Economics and Technology. Meanwhile, his mother is an engineer. His grandfather was an infantryman in the Red Army during World War II, rising to the rank of Colonel. Young Volodymyr was raised speaking Russian in his home.

Volodymyr Zelenskyy is Jewish. Zelenskyy’s great grandfather along with three of his brothers perished in the Holocaust. Vladimir Putin’s allegations that he invaded Ukraine to purge it of neo-Nazis is, like much of that unbalanced man’s worldview, fairly delusional.

Zelenskyy was given a grant to study in Israel, but his father forbade him from going. He ultimately earned a degree in Law from the Kryvyi Rih Institute of Economics but never practiced. From an early age, Volodymyr Zelenskyy felt drawn to show business.

The young man found that he had some proper comedic chops, and he began participating in comedy competitions at age 17. At age 19 he had created the Kvartal 95 comedy team. This company went on to produce a wide variety of television programs, cartoons, and commercials. Along the way he performed extensively around Russia. Zelenskyy also provided the voiceover as Paddington Bear for the Ukrainian versions of the original movie as well as its sequel.

In 2015 Kvartal 95 launched its most popular program to date. Servant of the People starred Zelenskyy in the lead and had a compelling premise. In Servant of the People, Zelenskyy plays a divorced High School History teacher who lives with his parents and niece. His character is likable and committed yet predictably put-upon. He cares deeply for his students and is a popular educator.

Like all former Soviet states, Ukraine has a deep-seated problem with institutional corruption. This is one of several reasons Ukraine is not already a member of NATO. One of the backstory themes in Servant of the People is a cabal of shady oligarchs who hand-pick the president and subsequently maintain a stranglehold on political power.

On the program Zelenskyy’s character engages in a profane rant one day in his classroom with a fellow teacher wherein he rails against the corruption and inefficiency of the Ukrainian government. Without his knowledge one of his students records the diatribe on his cell phone and posts it on social media. The young teacher’s raw, unfiltered enthusiasm resonates with his students and their parents, so they launch a crowd-funding campaign to get him elected president. Zelenskyy’s character unexpectedly wins the election on the strength of that single video alone.

The rest of the first episode is a humorous fish-out-of-water trope that follows the shocked young History teacher as he assumes the trappings of his nation’s highest office. The show is available on Netflix with English subtitles. Once you get past the language issues it is quite well-executed. However, here’s where our story gets really weird.

Servant of the People was wildly popular in the Ukraine. In the Spring of 2018 his production company Kvartal 95 officially registered the name Servant of the People as a new political party. Six months prior to the election, Volodymyr Zelenskyy was leading in presidential opinion polls despite not having declared his candidacy.

Less than four months before election day Zelenskyy announced that he was indeed running for president. However, his was a profoundly disruptive candidacy. He eschewed the traditional rallies and talk shows in favor of YouTube clips and social media. He ran on an anti-establishment platform that promised to root out corruption. His stated goals were, “to bring professional, decent people to power” and “to change the mood and timbre of the political establishment.” He won in a landslide with 73 percent of the popular vote.

Zelenskyy was inaugurated on May 20, 2019. He inherited a nation embroiled in war with Russian separatists in the East and with the covid pandemic looming on the horizon. His administration subsequently precipitated the expected controversy and scandal, but he yet remained popular with the people. Two months after his inauguration the fledgling Servant of the People party won the first single-party majority in the Ukrainian parliament since the fall of the Iron Curtain, ultimately holding 254 of the 424 parliamentary seats.

With the advent of 2022 came increased friction with Vladimir Putin and Russia. Putin viewed NATO as an encroaching threat and saw Zelenskyy with his overtly Western ideals as his nemesis. As absolutely everybody on the planet knows by now, on February 24th Russia rolled into Ukraine with 190,000 combat troops.

The entire world expected Ukraine to fall in days. Ukrainian forces reeled in the face of the overwhelming combat power of the massed Russian legions. When things looked darkest Joe Biden did what Joe Biden does, which is to offer Volodymyr Zelenskyy a helicopter ride out of the country to freedom and exile. In response Zelenskyy famously responded, “I need ammunition, not a ride.”

In the hard days that followed Volodymyr Zelenskyy became the very image of the selfless combat leader. He defiantly announced his physical location in public. He donned body armor and a helmet to mingle with his troops in the ramparts defending the capitol Kyiv. In so doing through raw force of personality he galvanized the Ukrainian people into an unbreakable whole.

Then in an act literally without precedent, Zelenskyy addressed the various congressional and parliamentary bodies of most of the free world’s nations to wild adulation. In an absolutely epic example of manliness, he conducted these presentations in a green t-shirt and he didn’t bother to shave. The tacit message was that Volodymyr Zelenskyy is leading his nation in an existential war for survival. He doesn’t have time for a suit and tie. What a stud.

Volodymyr Zelenskyy is only 44 years old. He married Olena Kiyashko in 2003. They have two children aged seventeen and nine. At 5′-7″ Zelenskyy is fairly short. By contrast, Vladimir Putin is 5′-5″ and purportedly wears lifts in his shoes to make himself appear taller.

You have to go back to Theodore Roosevelt to find an American President who was in the same league as Volodymyr Zelenskyy. Our current crop of leaders isn’t worthy to polish the man’s combat boots. Zelenskyy recently drew comparisons to Winston Churchill, but even that pales to a degree. Churchill was an undeniably brave man, but he did not embrace physical peril for the sake of his country as does Zelenskyy.

As I type these words this ghastly war is still in its infancy. People on both sides are dying by the thousands at the whim of the mad dictator in the Kremlin. In the person of Volodymyr Zelenskyy, however, we see the very personification of selfless patriotism. The Internet is dirty with memes claiming that Zelenskyy’s testicles are detectable on radar from enormous distances. It turns out that the stand-up comedian who played the Ukrainian President in a comedy television program is arguably the most inspirational head of state the world has seen in centuries. Whoever might have thought?