The Umarex Hammer is an American-built .50 caliber air rifle with innovative design that should appeal to hunters and shooting enthusiasts alike. The .50 caliber Hammer doesn’t alter the laws of physics, but instead takes advantage of them. The Hammer’s primary objective is to launch a big slug from its .510 caliber barrel for big game hunting. 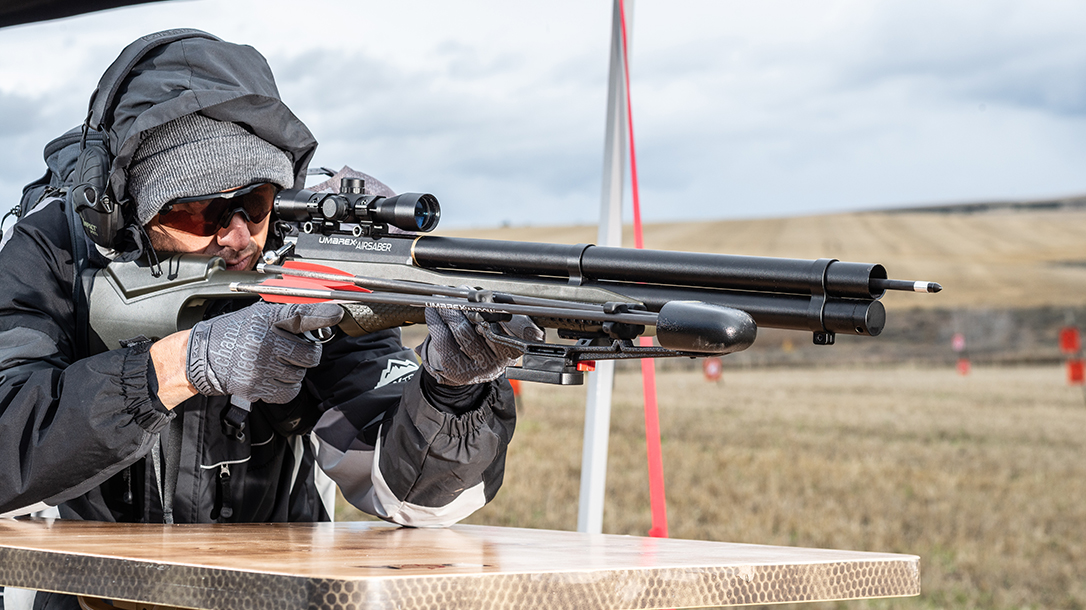 How the Umarex Hammer Works

So how does Umarex achieve the sheer energy and three full-power shots delivered by the .50 caliber Hammer? Well, it uses its proprietary, patent-pending Lightspeed valve. The innovative engineering used to design this internal mechanism coupled with a .510 caliber, 550-grain lead slug is the recipe for delivering more than 700 foot-pounds of energy at the muzzle. Almost as impressive, it only takes about two pounds of effort to operate its straight-pull bolt.

The Hammer’s Lightspeed valve, coupled with a precision regulator, instantly pulses a charge of compressed air to 3,000 psi behind the projectile. This innovative patent-pending system has the capability to efficiently propel a .510 caliber 550-grain lead slug at a muzzle velocity of 790 feet per second and a 250-grain slug at more than 1,000 feet per second.

The bolt-action rifle allows for a quick follow-up shot from the two-shot linear magazine in seconds. Not that you’ll need it, but the Hammer can launch three full-power shots down range before the velocity begins to drop. Firing a fourth shot before recharging produces nearly 90 percent of full power; that will yield another shot with the remaining air if the Hammer is filled to its 4,500 psi capacity.

Unlike a traditional firearm, the Hammer doesn’t generate a comparable report or recoil signature. The recoil of this big bore air rifle can best be described as a firm push, rather than a sharp punch like other large-bore rifles. Also, you don’t need hearing protection.

Umarex collaborated with PolyOne Corporation, a premier provider of specialized polymer materials, services and solutions, in the design, engineering and material selection for the stock of the Hammer air rifle. As a result, the stock, forearm and other key polymer components are produced from Nymax; it’s a polymer that withstands normal bumps and dings that occur while hunting.

The rifle’s forearm accepts M-LOK accessories. It also incorporates a sling stud in the lower half of the rear stock. Advanced polymer materials and an innovative design produce smooth edges and tight-fitting joints providing a functional stock for the Hammer rifle. The stock houses a 24-cubic-inch carbon fiber tank. It holds 4,500 psi of compressed air, which is regulated to 3,000 psi per shot. It measures 43.75-inch overall length, and an 8.5-pound overall weight unloaded without scope.

The Hammer has proven itself on many hunts during its long development cycle with a wide variety of big game. I spoke with Justin Biddle, Umarex’s Marketing Director, at the 2020 Athlon Outdoors Rendezvous in Idaho. He told me that he bagged a black bear last spring in Canada using the Hammer. Other hunters have also used the Hammer to tag big game from whitetails to Cape buffalo on the Dark Continent. Presently, 21 states allow large-bore air guns for hunting whitetails.

Having shot it at the Athlon Outdoors Rendezvous, the innovation certainly lives up to the hype. Last on the agenda is MSRP. The Hammer retails for $850. For more information, please visit UmarexUSA.com.