What’s better than launching an arrow with a burst of air? Launching TWO arrows in rapid succession. Last year when Umarex introduced the AirSaber, it quickly gained the attention of crossbow hunters who fielded the classic complaint of not being able to reload fast enough in a pinch, or in some cases not at all. Those that have already made the switch to the AirSaber have been yearning for more, wanting something that could get another dart in the air PDQ. The Umarex AirSaber Elite X2 addresses these issues by mating today’s modern PCP arrow gun with the classic side-by-side styling of the double-barrel shotguns of yesteryear. 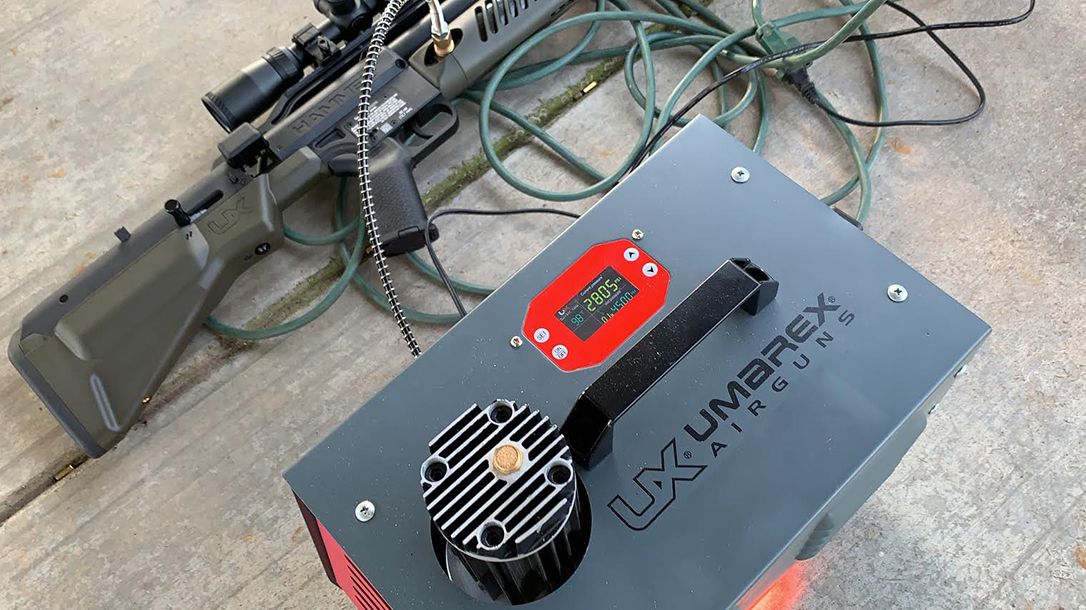 Where else would I encounter this device other than the 2021 Athlon Outdoors Rendezvous, months before it would be released at the SHOT Show. If you are familiar with the single-barrel design, then you’ll find the stock familiar and equally comfortable as its predecessor. The X2 also retains its forward Picatinny rail sections for accessories such as bipods, lights, and/or lasers and of course a rail section to mount an optic. Included with the gun is a fixed 4X scope that has BDC hash marks to help you compensate for the traditional ballistics of conventional arrows.

When you roll the X2 over you will find its charging port, which can accept a charge via a compressor, SCUBA tank, or even a hand pump if you don’t mind the workout. This brings us to the second-most notable upgrade, an extra 400 PSI of capacity. On a full charge, the included arrows will carry 169 ft./lbs. of energy, which is more than twice what it takes to kill a freaking grizzly bear! Speaking of hunting, seven states currently allow it for whitetail deer pursuit, and more doors are opening to this platform every day. At the event, we were lucky enough to have a SCUBA tank available and it only took a few seconds to get the X2 ready to fire.

Once filled, an arrow slips over each tube, followed by working a short-throw bolt action to cock the action. After firing your first shot you flip the valve selector to the other side, run the bolt, and fire again. It is literally that simple. At the event we had a three-dimensional deer target standing at 25 yards and each writer put both of their shots into the vitals with very little fuss. The 376-grain arrows were estimated to be traveling at 450 Feet Per Second and impacts were less than two inches apart from each other. During the cease-fire we were invited to go pull the arrows out, which was a true revelation of the power that the X2 commands.

The Umarex Air Saber X2 Elite is one hell of a gun that takes a design that was on par with the modern crossbow and brings it to the point where it outperforms one twice over (hence the name X2?). If you enjoy the challenge and the silence of hunting with a crossbow, the X2 is your ticket to clean kills, effortless practice, and an extra shot should you realize you need more range time when that trophy buck presents himself. It’s also nice to have a second shot ready should the opportunity present itself to fill two tags in a single encounter. For more information visit umarexusa.com.

Win Your Own AirSaber Elite X2!!!

Right on time, Athlon Outdoors’ Free Gun Friday drops, and this week we feature the Umarex AirSaber Elite X2. From big-game hunting to serious fun on the range, you’re gonna want the new double-barreled AirSaber in your gun locker. Enter the Sweepstakes HERE for your chance to win!

Get Ready for Full-Auto Fun With the Umarex M3 Grease Gun!