by Mike Detty
in Guns, Handguns
0

Tyler Gun Works is auctioning an engraved Colt Single Action Army, 45 Colt, on Gunbroker.com and the proceeds will go to the Firearm Engravers Guild of America (FEGA). The Tyler Gun Works auction ends May 24, 2021, at 12:43 p.m. EST. Overall, it’s one heck of a build with an even better story. 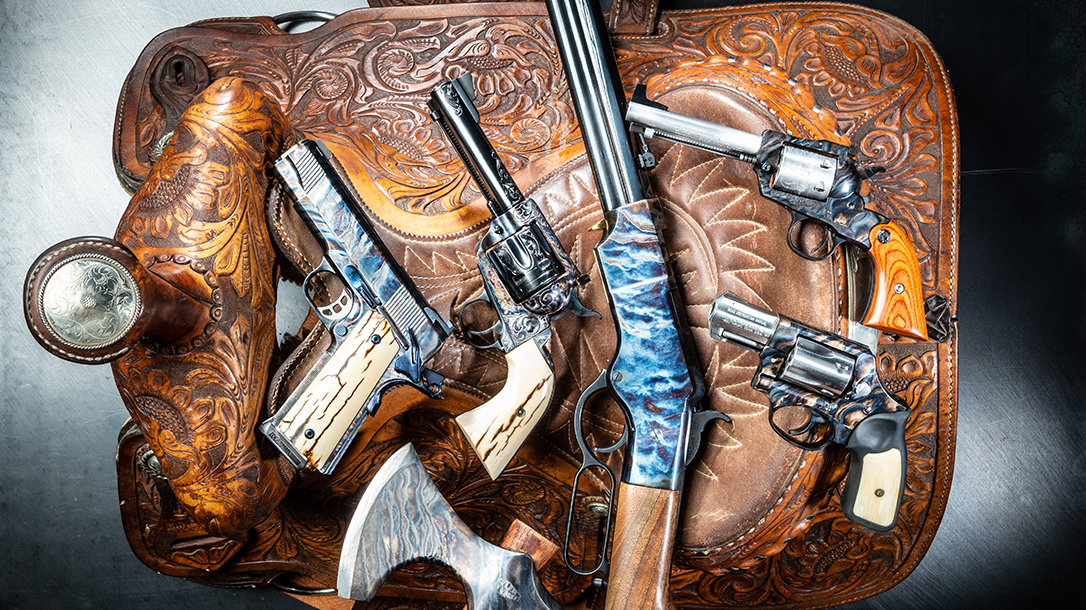 The Story Behind the Tyler Gun Works Auction Gun

Part of the Tyler Gun Works Engraving Extravaganza, the gun up for grabs is a Colt Single Action Army. In an effort to broaden the pool of skilled engravers, Bobby Tyler of Tyler Gun Works held a competition with more than 60 entrants.

Each participant was given a 3-by-5-inch carbon steel plate to engrave. Once Tyler narrowed the field to 10 finalists, each were issued a new Colt Single Action Army, in the white, along with the instructions to engrave them to the best of their abilities. The Colts became blank canvases for these artists to display their skill, techniques, and talent. Tyler Gun Works put up a cash prize of $10,000 cash.

Ten-months later, all 10 guns were collected and the craftsmen at Tyler Gun Works color-cased the frame, blued the cylinder and barrel, and nitre blued the screws. Guns were then fitted with Red Stag grips and a felt lined display case. For even more info on the Tyler Engraving Extravaganza, held Feb. 6, 2021, read Mike Detty’s article in the upcoming June/July 2021 issue of Ballistic Magazine. We’ll also have complete video here on BallisticMag.com on June 8 (or close to that time).

The Gun Up for Grabs

Joshua Feichtinger, of MN Hand Engraving in Burnsville, Minn., engraved this particular Colt. Besides engraving, Feichtinger is also an accomplished goldsmith and stone setter. He textured the Colt with stunning gold inlay and beautifully executed scroll engraving. This handsome, one-of-a-kind, engraved Peacemaker would make an awesome addition to any collection!