I first laid eyes on the Traditions Crackshot XBR in Vegas. At the 2020 SHOT Show, an interesting development occurred with the introduction of multiple arrow-firing rifles to the marketplace. Some launched full-sized arrows, while others utilized familiar crossbow-sized bolts. 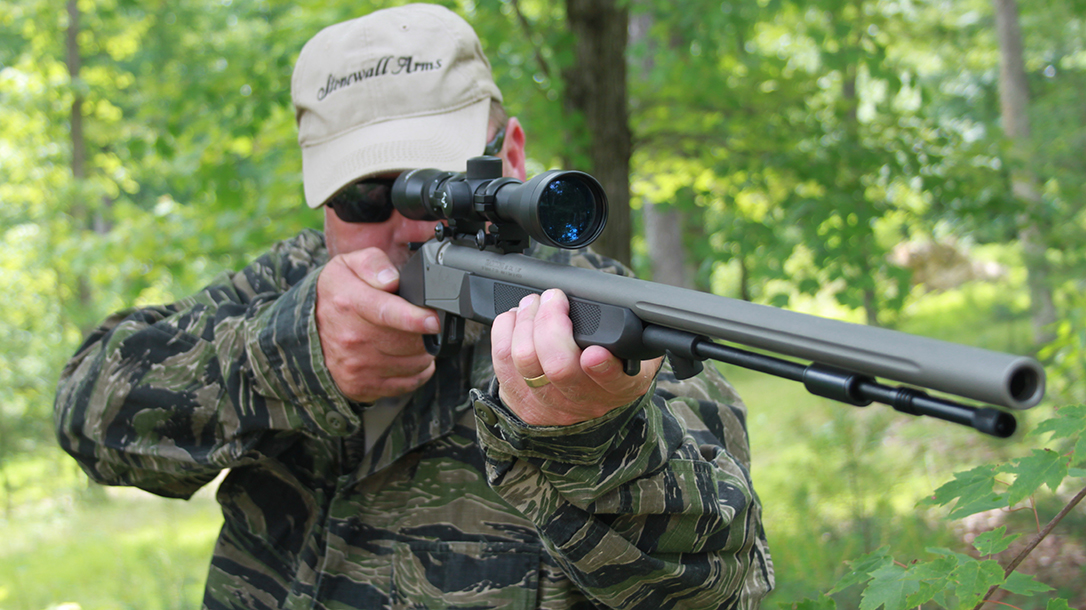 The majority were pre-charged pneumatic airguns using high-pressure air (HPA) to send their payload. They all worked by directing their thrust immediately behind the arrowhead as opposed to pushing the arrow from the back end. This method helps to eliminate something called the “archer’s paradox,” where a traditionally launched arrow pushed from the rear causes the shaft to bend and flex as the mass of the arrow resists that push. With the launching forces concentrated behind the tip of the arrow or bolt, it’s effectively pulled off the launch tube/inner barrel and stabilizes immediately.

One model stood out because it was from Traditions Performance Firearms, the folks out of Old Saybrook, Conn. Traditions imports/produces all those great blackpowder guns and replica Old West centerfire arms. Traditions’ patented version of an arrow-firing rifle took on the guise of the company’s single-shot, break-barrel .22 Crackshot rifle with an interchangeable barrel/upper to fire bolts. Thus was born the Crackshot XBR.

The .22 firing module is made in Spain by Ardesa and has a stout 16.5-inch barrel. When combined with the polymer stock section, the unit only weighs slightly more than 4 pounds and is 32 inches long. Removing the sling stud under the forearm allows the forearm to come off and the .22 barrel to be separated from the stock/receiver. Replace it using the U.S.-made, 20-inch XBR upper with its longer forearm and hex-head screw. Now you have a powerful, compact hunting arm in a package weighing under 6 pounds and just over 3 feet long.

How the Crackshot XBR Works

True to its heritage, Traditions chose to utilize the power of a powder-actuated cartridge to launch the payload. Using a proprietary .27-Caliber Long blank that is placed into the chamber, a crossbow-sized bolt specially made for use with the XBR, called the “Firebolt,” is slid over the inner barrel with the vanes being surrounded by an outer aluminum shroud.

The Firebolt is a 16-inch 2216 aluminum arrow weighing 238 grains. For my testing, I installed 100-grain target tips, which shooters can quickly swap for 100-grain broadheads for hunting applications. Traditions cautions against trying to fire other arrows/bolts from the Crackshot XBR as the pressures involved could cause a catastrophic failure and result in injury to the shooter or bystanders.

Once the bolt completely seats over the inner barrel, shooters can break open the Crackshot XBR action by pulling on the barrel catch release at the front of the triggerguard. Then insert an XBR Powerload. Use care to completely seat the Powerload up against the extractor and close the action without crushing the rim, which could detonate it.

Next, take the trigger-blocking crossbolt safety off as the hammer cannot be cocked with the safety engaged. Due to the length of the pre-mounted scope, Traditions attached a hammer spur to the hammer for ease of cocking. Once cocked, shooters can reengage the safety if not ready to fire.

There are two other safety features built into the Crackshot XBR system: A transfer bar to prevent the hammer from contacting the firing pin if the trigger is not pulled, and the action is blocked from opening if the hammer is cocked back. It can easily be de-cocked and unloaded without firing, making it especially safe for tree stand use.

On the Firing Line

I chose to concentrate on the arrow-firing capabilities of the XBR and forego plinking with the .22 barrel. I have no doubts it would provide excellent performance at typical .22 hunting ranges as it is a substantial single-shot barrel with a rifling twist rate of 1-in-16-inches, able to handle shorts, longs and long rifle ammo. When broken down from the 13.75-inch length-of-pull stock, it would make a great backpacking gun. It could also be an excellent training rifle for youngsters.

Traditions rates the XBR as capable of launching the bolts up to 385 fps. My work with it at over a mile above sea level yielded an average of 352 fps. Even though slightly slower than advertised, the effective kinetic energy at 30 yards was still over 93 foot-pounds.

The supplied Traditions 4×32 scope came already attached to the integral Weaver-style scope rail and sighted for 30 yards. Its duplex reticle compares to BDC types that may be found on modern crossbows having three stadia lines below the crosshairs allowing the shooter to determine holdover at various distances. The scope provided a clear sight picture and is a perfectly adequate setup for the XBR. It definitely aided in producing tight groups at distances out to 50 yards. You’ll find a set of scope lens covers as well.

Pull weight on the single-stage, non-adjustable trigger averaged 7 pounds 8.5 ounces on my test gun. While heavy, that might lighten up a bit with more break-in. It also wasn’t detrimental to accuracy when launching the Firebolts. It might require a bit of practice to obtain the best accuracy when shooting the .22 barrel.

Fired at 25, 30 and 50 yards, the accuracy was impressive. I did not experience any “Robin Hood” shots—a good thing as the bolts run about $8 each—but I came very close. Know that when the inner barrel gets dirty it causes the bolts to drop several inches below point of aim. As rimfire cartridges are generally known to be notoriously dirty, it’s necessary to unscrew the outer barrel/shroud and give it a couple of quick swipes with a bore cleaner and another with gun oil so the bolts don’t experience extra drag. On one occasion, this condition caused me to send a couple of bolts through the 2×2-inch wooden target frame. Still, the penetration was impressive at 50 yards!

Neither Fish Nor Fowl

While arrow-firing guns might not turn the crank of hardcore bowhunters, this innovation might have a place among gun hunters that prefer a backpack size solution and for those who might not want to invest in crossbows or the learning curve and practice associated with traditional archery. It is a great option for those with physical challenges.

If planning to take the Crackshot XBR hunting, keep in mind that Traditions rates its effective hunting range at approximately 70 yards. As far as its legality for hunting in the United States, Traditions is working with state governments on that. As governments are wont to do, none have confirmed nor restricted the XBR specifically at this time.

Technically a rifle utilizing a metallic cartridge (blank) to shoot bolts blurs the lines. Each state might offer a different determination if/when it is allowed and whether it will be treated as a rifle, crossbow or usable during archery season. Special seasons for youth and disabled persons could have an impact on the decision as well. It will be the hunter’s responsibility to confirm with his or her respective state wildlife agency. Have their answer in writing with you when hunting with the XBR. The possible exceptions would be states that allow taking predators or invasive species by any means.

The Crackshot XBR came well packaged with a comprehensive owner’s manual. It has sections on the Crackshot and the Crackshot XBR. The manual covered all aspects of safe use and swapping of uppers and cleaning/storage. Traditions also packed it with both black & white and color photos. The pamphlet included for the scope left could’ve use a little more info, though.

Traditions included three proprietary Firebolts. Also included are the Allen wrenches for attaching the forearm of the XBR upper and adjusting the Traditions 4×32 scope. An additional accessory available from Traditions is a quick-detach, side-mount quiver that holds six Firebolts. The proprietary Traditions XBR Powerloads come in packs of 100 for $25.95. Only available from Traditions or its retailers, you won’t necessarily be putting as many bolts downrange as you would .22s, so a box or two of the loads will probably last the shooter a good while.

The Crackshot XBR package in the all-black, synthetic-stocked version retails for $513. It’s also available in two camo versions as well: Kryptek Highlander Reduced or Realtree Edge, at an MSRP of $589. A limited lifetime warranty comes with all of its products. For even more info, please visit traditionsfirearms.com.