by Garrett Lucas
in Gear, Knives
0

"Though they are designed for similar tasks, both have their own strengths and stand out individually for the type of work that they do best. I had a chance to pit the TOPS VI Ax and the Half Life Knives Tactical Hawk against each other, and the results were interesting to behold."

A favorite tool of blade aficionados is the tomahawk. It can be used in a variety of ways, including plain old chopping, breaching, self-defense and a plethora of other uses. Nowadays, there is a large audience for tactical “hawks”—an update on the frontier classic. Tactical hawks typically feature all-steel construction rather than having a wooden shaft and a steel head. They are also usually overbuilt to some degree to handle more abuse than what a traditional tomahawk might encounter in the field. 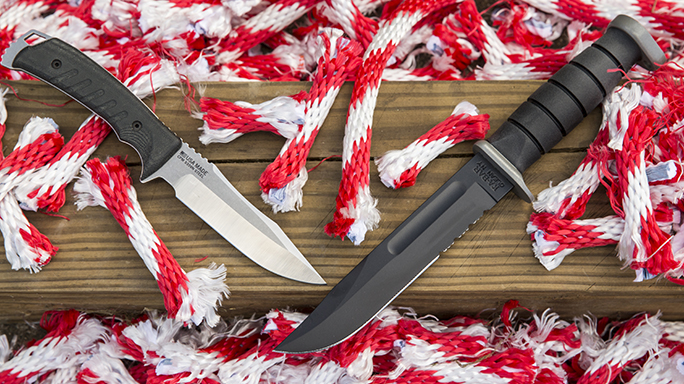 Recently, I had a chance to work with a couple of hawks that are new to the market. Though they are designed for similar tasks, both have their own strengths and stand out individually for the type of work that they do best. I had a chance to pit the TOPS VI Ax and the Half Life Knives Tactical Hawk against each other. The results were interesting to behold.

Inspired by Viking axes of old, the TOPS VI Ax has its own special characteristics that make it a tool unique unto itself. While TOPS is very partial to 1095 steel for most of its blades, the company went with 1075 on this model to offer up more impact resistance.

From the beard, or hook on the blade, the handle is 12 inches long with the linen Micarta grip slabs occupying 5.25 inches. The head is 8.5 inches across with a 5.25-inch blade. A nicely executed touch on the VI Ax is the double-edged spike at the rear of the head. It has a 2.18-inch cutting edge on top and one on the bottom that measures 1.88 inches.

Because of the massive head relative to the handle, the VI Ax allows good momentum to be built up during the swing. To enhance that movement, TOPS designers built a crook into the handle so that the blade face is always tilting slightly forward. This is similar in some ways to the forward-biased balance of a kukri.

Weighing 39 ounces while being 0.31 inches thick, the VI Ax definitely impresses as a hefty and robust hawk that can stand up to a good bit of work. To assist the owner in getting the VI Ax to that work, TOPS has provided a quality leather sheath with two retention straps. The loops are large enough to lash the sheath to a pack or other piece of gear, but for safety reasons the loops are not sized for carry on a belt.

In some ways, the Half Life offering is similar to the TOPS model. The A2 steel used in its construction comes in at 0.3 inches. Again, that is a little thicker than one might see in standard hawks. The A2 steel used here has an extremely high toughness rating, making it a particularly good choice for a hawk. Toughness has to do with resistance to cracking or fracturing during impact; A2 is a steel that is used to punch and form other steel tools.

The dimensions of the Tactical Hawk are fairly similar as well. It has an overall length of 16 inches with a blade measuring 4.25 inches long. In contrast, the Tactical Hawk has longer Micarta grip slabs measuring right at 10 inches. This offers the user more gripping points, making it easier to choke up on the handle to do more precise and finer work. 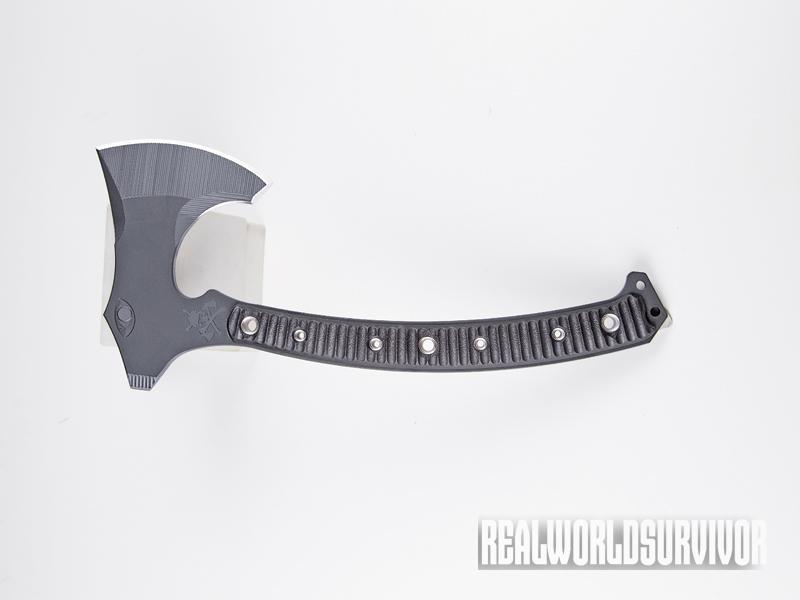 Despite the similar thickness, the Tactical Hawk weighs 32.12 ounces but does not quite have the heft of the VI Ax. There are several lightening holes drilled into the steel to help reduce weight to make it more nimble and quick in the hand.

The Tactical Hawk also comes with a quality Kydex sheath that has a Tek-Lok fastener large enough to be worn on a belt. Though the Kydex offers good protection from the sharpened faces, however, there is no retaining strap to keep the hawk inside the sheath. Since the hawk does not snap/lock into place in the sheath, it could slip out if worn on the belt. But, Half Life Knives does offer leather sheaths that do not suffer this shortcoming.

Though the designs are quite similar, even subtle differences can make tools perform much differently in hand. There was nothing to do other than try them out in the field and see which worked best—at least for myself.

The first exercise was to try out each hawk’s spike on a 55-gallon steel drum. The spikes on most tactical hawks are used for the more destructive tasks like breaching, since most of the force needs to be concentrated into one point. While trying to puncture the top of a steel drum isn’t recommended if you want your hawk to have a long life, it is a good approximation of some of the more extreme uses that tactical hawks often see.

The double-edged design of the VI Ax’s spike made it easier to puncture the steel drum than using the spike on the Half Life Tactical Hawk. The VI Ax’s spike is thicker in that area, and the two edges work in tandem to open the steel during each strike.

The Tactical Hawk punctured the drum as well, but because of the spike’s bird’s beak at the end, I had to hit at just the right angle to make it through the steel. With the VI Ax’s spike pointing more or less straight back, the angle of attack did not really need to be contemplated.

When it came to chopping down a tree with a 5-inch-diameter axe face, it was my personal view that the Half Life model had the upper hand, though it wasn’t obvious at first. The reason it wasn’t immediately clear is because the TOPS VI Ax was getting deeper bites into the wood due to the forward bias and the extra heft of the head. However, I felt the crook in the VI Ax’s handle, while helping the edge bite deeper, also made the axe harder to control. Coupled with the short Micarta grip slabs, this design made the VI Ax feel like it was going to roll right out of my hand. The Tactical Hawk, on the other hand, had a more neutral balance and felt much more controllable.

And when it comes to defensive work, that more neutral balance of the Half Life model would better serve the user. It’s easier to shift gears and go a different direction with the more-nimble Tactical Hawk than it is with the VI Ax. The forward bias makes VI Ax’s response sluggish and a bit unwieldy. 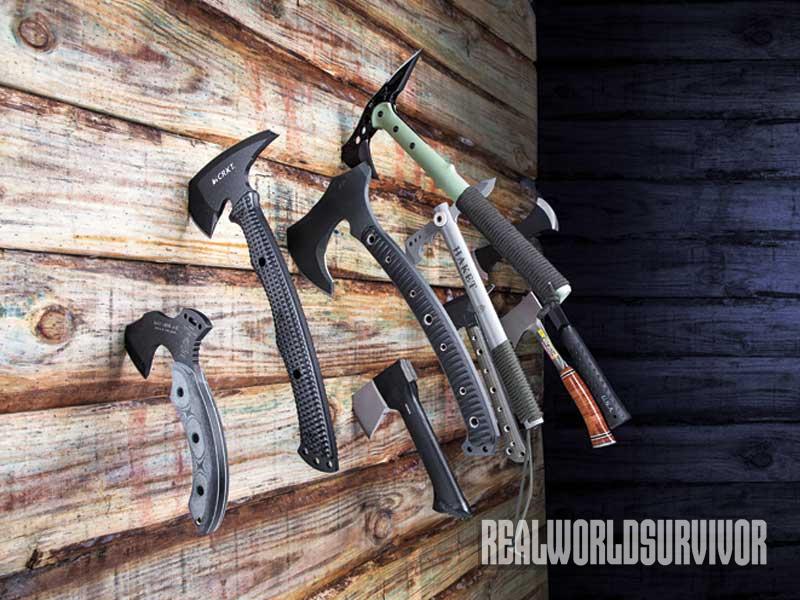 Though one thing the TOPS VI Ax did have going for it in this regard was a good-sized lanyard hole drilled into the handle, whereas the Tactical Hawk had none. If you’re doing some heavy work that requires a bit of energy and force, having a lanyard in place definitely improves your safety and control.

After the good-sized tree was down, it was processed by the two axes. Here again I felt the Tactical Hawk had the advantage for the most part. It had a better edge profile for limbing the tree, and the longer grip slabs made it easier to choke up and get in closer for detail work. But when it came to sectioning up the tree into individual pieces, the VI Ax took over again by offering deeper bites with its weight and balance.

As noted, each hawk had its own particular strengths. As far as design elements go, from the spikes to steel composition to the grip slabs, it was a tit-for-tat interplay between the two. So the question comes down to which of the two would be a better choice. Well, that just depends.

For raw power and a better breaching design, the TOPS VI Ax has the edge, particularly with the double-edged spike. But when it comes to control, edge profile, steel composition and a better balance, I’m of the opinion that the Half Life Tactical Hawk wins the round. It all just comes down to what the user really needs.

Besides your intended usage, price should be considered as well. The TOPS VI Ax retails for $350 while the Half Life offering runs for a stiff $825. This price differential alone could make the choice for you. However, most folks are going to base their decisions on what their needs are. And a lot of people appreciate the value of a handmade custom piece as part of their loadout.

Both hawks are excellent in their own right. Whether it’s chopping, prying or breaching, they’ve got you covered. It comes down to user tastes and preferences, and the type of work you’ll be presented with most often. The only real thing you have to worry about is picking the right tool for the job.