I have been married for 30 years to a beautiful woman and have been blessed with three fantastic kids. I’m confident in myself and comfortable with my life choices. However, I have to admit that I still think Tom Selleck is one exceptionally good-looking guy.

If Tom Selleck’s mustache got into a fight with Chuck Norris’ beard, the resulting explosion would make the Big Bang seem like a fart in a bathtub. Magnum P.I. ran for eight years from 1980 until 1988. This uber-cool TV show introduced the world to Thomas Sullivan Magnum IV, a private investigator who is also the professional houseguest of a ludicrously rich adventure novelist named Robin Masters. Thomas Magnum was like Kato Kaelin only with initiative, responsibility, taste and testosterone.

A Quick Refresher on Thomas Magnum

According to the backstory, Magnum is an ex-Navy SEAL who also served as a Naval Intelligence officer during Vietnam. The show was lauded at the time for depicting Vietnam veterans as sensible, productive citizens rather than scary burned-out failures. Magnum lives in the guesthouse on Masters’ sprawling estate, taking criminal investigation cases whenever he wants. His relationship with Masters gives Magnum access to amenities, opulence and some epically fine cars. Masters was intentionally enigmatic. Never shown on camera, Masters was voiced by none other than Orson Welles.

Magnum’s nemesis is Jonathan Quayle Higgins III, a former British Army sergeant major played brilliantly by American actor John Hillerman. Higgins is the caretaker of the Masters estate. The tension between Magnum and Higgins over the use of the fancy cars and estate assets makes for great comic relief. Their “Odd Couple” chemistry evolved with the show and clearly resonated with fans.

Magnum also has a couple of great buddies. Theodore Calvin (known as T.C.) owns Island Hoppers, the local helicopter service. T.C. served with Magnum in Vietnam as a Marine pilot. Then you have Orville Wilbur Richard “Rick” Wright, another Marine who owns a local watering hole called the King Kamehameha Club. In the pilot episode, this was called “Rick’s Place” in homage to the Humphrey Bogart classic Casablanca.

With this as a foundation, Magnum meets and woos beautiful women, many of whom come to him for help solving their cases. He also drives around the paradise that is Hawaii in Robin Masters’ awesome cars while generally saving the world. Despite his undeniably rugged aesthetic and hardcore backstory, Magnum has a golden heart and always seems to do the right thing. And he ended up becoming the paragon of American manliness.

But this is a gun website, so let’s talk about the guns.

Magnum’s primary handgun is a Colt Series 70 1911. He eschews a holster, preferring to just shove the gun in his belt whenever he needs it. Mel Gibson’s character Martin Riggs did the same thing in Lethal Weapon. Apparently when you are that cool, you just don’t need a holster for your handgun. 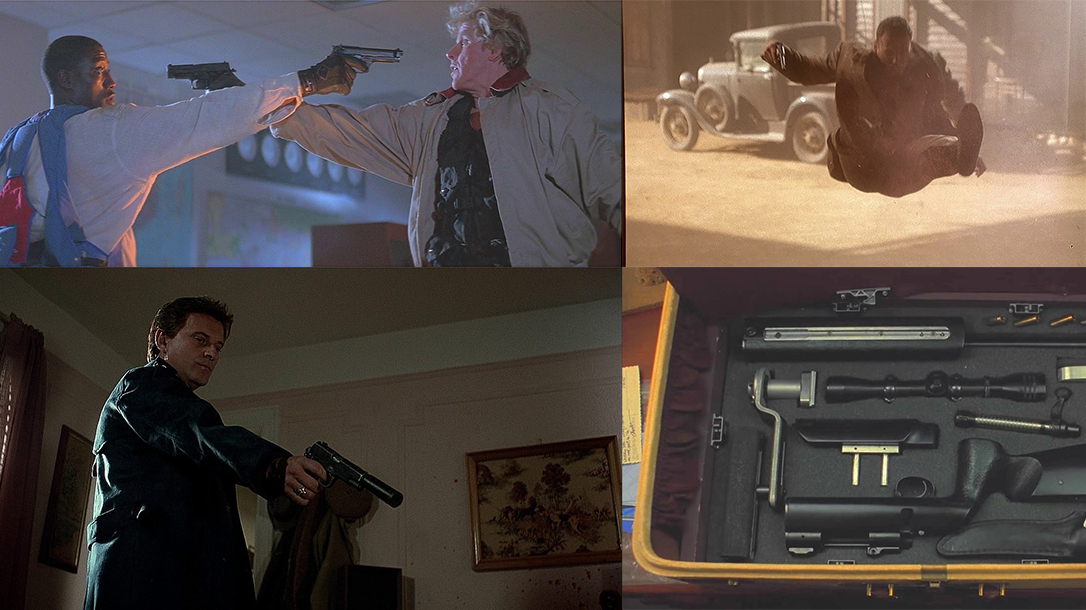 Reportedly, .45 ACP blanks were tough to come by in Hawaii, so Magnum ended up using a 9mm 1911. Al Gore had not yet invented the Internet and the show was set on an island, so the show’s armorer had to make some concessions. You can tell the difference during magazine changes, as the 9mm version sports a prominent longitudinal ridge down the magazine body. (According to my wife, the fact that I notice such stuff is the reason I have so few normal friends.) Given Magnum’s history as a Navy SEAL in Vietnam, his use of a 1911 as a familiar handgun is certainly reasonable.

In the pilot episode, Rick produces a 9mm MAC-10 to neutralize a hitman. In 1980, the MAC-10 was the apex predator among submachine guns. Compact, powerful and surprisingly heavy, the MAC-10 was actually a special-purpose weapon. The only reason it found the commercial legs it did was that it was cheap, cool and available. The MAC-10 saw limited use by Special Forces personnel in the latter stages of the Vietnam War and cycled at a blistering 1,200 rpm.

The show makes use of flashbacks to Magnum’s service in Vietnam to fill in portions of the story pertinent to the narrative. Magnum and his SEAL buddies sport cool tiger-stripe fatigues and wield legit full-auto M16A1 rifles. This was a bit unusual for the day, as many of the full-auto M16 clones used in TV and movies were actually converted SP1 AR-15s. In the days before 1986, it was still legal to convert semi-auto guns to full-auto, so converted AR-15s were both plentiful and cheap.

Despite some ignominious early combat performance in Vietnam, the M16 has gone on to become the longest-serving combat rifle in U.S. military history. Magnum and his SEAL buddies just hose down the countryside on full-auto, one magazine at a time. However, Magnum is actually shown reloading at one point during a firefight, a nice departure from Hollywood dogma.

The show features the obligatory array of wheelguns in the hands of sundry bad guys as well as some curious automatic weapons. Uzis were brand new in the United States at the time, so some of the early Uzis in the show were actually MAC-10s dressed up in a little Uzi-like furniture. These same guns can be seen in Stripes and The Dogs of War.

Vietnamese communist troops and their Russian advisors make for Magnum’s alpha villains, and they all wield Finnish Valmet rifles. In 1980, genuine Kalashnikov guns were rarer than unicorn horns in the U.S. It is tough to imagine today, but veteran bringbacks really were the only source of AK rifles during this time. Egyptian Maadi AKs eventually hit the market, but they were expensive. Converted Maadis first saw widespread use in the 1984 John Milius classic Red Dawn. Stripes features these same Valmet rifles in lieu of Czechoslovakian hardware as well.

Magnum’s primary ride in the first season is a gorgeous cherry red 1979 Ferrari 308 GTS. For seasons two through six, that became a 1981 308 GTSi. For the last two seasons, the car was a 1984 Ferrari 308 GTSi quattrovalvole. Most of these rides sported the custom license plate “Robin 1.”

I was 14 in 1980 when the show premiered, and I wanted one of those red Ferraris in a manner that approached unseemly. For an American teenager in 1980, that Italian sports car was a little unobtainable piece of portable rolling heaven—the ultimate chick magnet. Zipping through the local Sonic in one of those puppies would have made Pee-wee Herman look like the Marlboro Man.

I still recall the first time I saw one for real. It was parked outside the Dallas airport, and I just wandered around admiring the sleek lines, prancing horse logos and low-slung architecture. My heart raced just standing next to the thing. I also recall it being surprisingly small.

I actually priced them at the time and was astounded to find that a new Ferrari 308 would set me back around $50,000. How could I get one? I made $3 mowing the yard across the street, so I would only have to do that another 17,000 times to make that sweet ride mine. A quick glance at eBay motors this afternoon shows a 1978 version in need of a little love listing for $39,000. Get thee behind me, Satan.

I did actually end up with the next best thing, a red 1984 Pontiac Fiero. “Fiero” even sounded a little bit like Ferrari if you said it fast while mumbling. The car was a graduation present from high school. I had the coolest grandparents in the entire world.

Robin 2 was alternately an Audi 5000 or a Jaguar XJ Series II. Robin 3 was either a GMC Jimmy or a Jeep Wagoneer. Seen only once in the 13th episode of the sixth season was Robin 23, a Ferrari GTSi rendered in green. This was enough to make me wonder what Robins 4 through 22 might have been like.

Magnum’s personal ride is actually a 1966 Volkswagen Beetle convertible with some generous rust deposits on the driver’s side door. Magnum himself does not seem to accumulate a great many worldly possessions. The implication throughout the show is that Robin Masters’ exceptional generosity likely stems from some remarkable favor Magnum has performed for him in the past, perhaps as part of some personal investigation.

Though I’ve never met him, Tom Selleck sounds like a genuinely nice guy. A self-described libertarian and firearms enthusiast, Selleck was born in Detroit, Mich., and served in the 160th Infantry Regiment of the California National Guard from 1967 until 1973. He has been married for 28 years and has one daughter. He lives with his family on a 60-acre avocado farm in California. Selleck purportedly does not personally care for avocados. He also flatly refuses to text or email on general principle.

Those with whom he has worked say Selleck is an exceptionally personable gentleman with a powerful work ethic. He is a member of the board of directors of the NRA and has served as a public spokesman for the group on numerous occasions. In 2002, he donated the custom 13-pound 1874 Sharps rifle he used in Quigley Down Under to the National Firearms Museum. If you haven’t yet seen the film, put this magazine down, hit up Amazon and watch it now. I don’t care if you are at work, flying a plane, delivering a baby or driving. I’ll hold onto your man card until you’ve made it through the end credits. Quigley Down Under is the best Western film ever made, and that is saying a lot.

Tom Selleck’s Thomas Magnum defined a 1980s paradigm. The garish Hawaiian shirt, Detroit Tigers baseball cap, bushy mustache, laid-back persona and exceptional personal magnetism all synergistically combined to make something greater than the individual parts. Forget that Magnum is actually kind of a silly name, and that nobody who writes for a living makes as much money as Robin Masters. (I technically write for a living, and I drive my wife’s hand-me-down 2005 Toyota.) As a 14-year-old boy, I wanted to be Thomas Magnum.

I was rolling in a red 1984 Fiero at the height of the Magnum era and thought myself almost awesome as a result. Of course, I couldn’t grow a proper mustache then, but a pair of aviator shades combined with a Hawaiian shirt and a little imagination was enough to get me close, at least in my mind. I did ultimately land a hot girl of my own.

Now that I’m 52, I really should be past all that. I’m a grownup with a job, a mortgage, a family and real-world responsibilities. However, as soon as I get done typing this, I am going to surf back over to eBay and see what that old beater Ferrari looks like again. It’s only got 26,000 miles on the odometer, and spare parts aren’t really all that expensive, are they? Thomas Magnum would approve.