by Wayne Williams
in Lifestyle, People
0

Horace Kephart is one of the first outdoors writers and lived what he wrote.

Horace Kephart (1862-1931), famous as the “Dean of American Camping,” began his professional life focused on scholarly pursuits. At a time when only about 6 percent of Americans graduated from high school, he attended college and was a librarian at Cornell and Yale Universities. Cornell’s first librarian, Daniel Willard Fiske, later employed him in Italy to catalog his collection of rare books. This experience led Kephart to the position of head librarian at the St. Louis Mercantile Library in 1890. While in that position, Kephart published “Paste for Labels, With a Word About Writing Inks,” “Bindings in Libraries,”” and Classification”in Library Journal. 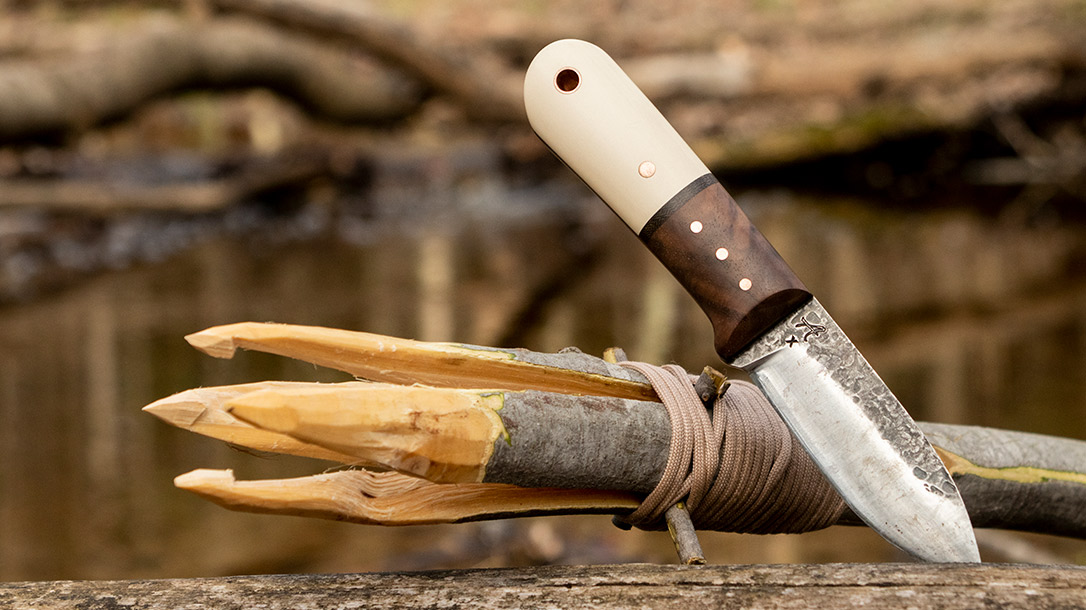 During the latter years of the 19th and first part of the 20th centuries, he was a librarian. He then became a prolific contributor to the premier outdoor magazines of the time. He has a reputation today as the author of The Book of Camping and Woodcraft, first published in 1906. It includes a chapter on the use of firearms afield and directions for dressing and cooking wild game.

So, how did he make this dramatic shift from librarian to backwoods outdoor writer? The pivotal point might have been in 1888 when, at the age of 26, he bought a rifle. He practiced with it until he became a marksman.

He wrote to a friend, “The ability to plunk an 8-inch bull’s eye at 200 yards, off-hand, gives me what my master’s degree does not: the consciousness that I would be good for something in a crisis.”

As a boy, Kephart’s parents encouraged his love of nature. While working in St. Louis, he took that interest afield on extended camping trips into the nearby Ozarks. It was here he could hone his hunting, fishing and camping skills.

Blending scholarship with his interest in the outdoors, he began to publish articles including “The Rifle in Colonial Times” in an 1890 issue of The Magazine of American History, “Scientific Sharpshooting” in Cassier’s Magazine and “Rifles for Big Game,” which was the first of many articles he wrote for Outing magazine. Articles in Forest and Stream, published in newspaper format,soon followed.

Kephart’s son, Leonard, later described his father’s den during this period. He described it as housing a collection of axes, knives, camping gear and pelts. Rifles were also racked on the wall beside several revolvers. “Kep,” as his friends called him, mastered the art and science of loading cartridges in this room. Over the course of his writing career, he would write dozens of articles on firearms, ammunition and their uses.

In 1904, Kephart was hospitalized with what was then known as a nervous breakdown. This led to his resignation from the St. Louis Mercantile Library. His wife, Laura, moved with their six children to Ithaca, New York. This began a lifelong but amicable separation from his family with periodic visits.

He wrote in his autobiography, Horace Kephart by Himself, “In the summer of 1904, finding that I must abandon professional work and city life, I came to western North Carolina, looking for a big primitive forest where I could build up strength anew and indulge my lifelong fondness for hunting, fishing and exploring new ground.”

It was than that he settled in Bryson City, North Carolina, where he kept an office for writing. He often explored the surrounding forests with local mountaineers he befriended.

He used his reputation as an outdoor writer to contribute the chapter “The Hunting Rifle,” to Guns, Ammunition and Tackle. It was part of the Macmillan Company’s American Sportsman’s Library. In 1912, he published Sporting Firearms, a study of the science of ballistics, covering everything from muzzleloaders to smokeless powder.

In writing this book, he applied the attention to detail of a cataloging librarian to the subject of guns. It includes trajectory tables for various cartridges and sections on muzzle velocity, jacketed versus soft-point ammunition, stopping power, trigger pull, sights, scopes and actions. It also explains shotgun gauges, chokes and shot sizes in full. He compared lever, bolt and pump actions (he referred to them as “trombone” actions) for rifles and shotguns and was in favor of the “simple, strong and durable” bolt action.

The book also discussed cleaning a bolt action from the breach: “The only proper way to clean a rifle.”
He felt that autoloading firearms were “ahead of the times” and needed design refinements. But he appreciated the silence of their rechambering action over the loud clicks of a bolt-, pump- or lever-action firearm.

He expanded his magazine career and by 1915 was an editor with Outing Publishing Company. This is where one of his assignments was writing the introductions for adventure books. Three years later, he became a staff member at All Outdoors magazine. He contributed articles on a breadth of outdoor topics and writing a series on firearms history.

He liked to attend shooting matches wherein some of the participants competed with locally made cap-and-ball rifles. Interacting with blackpowder shooters and gunsmiths gave him a working knowledge of muzzle-loading firearms. This knowledge was rapidly becoming lost to history in most of the country.

Kephart’s writings are full of practical shooting advice. He was an advocate properly sighting-in a rifle with a bench rest, then shooting off-hand at various ranges. As practice for hunting, Kephart recommended time afield with a .22 rifle. He recommended firing at targets near and far and from numerous shooting positions and angles.

He wrote in Camping and Woodcraft, “If frontiersmen generally are good shots, it is simply because they have had plenty of practice from their youth up…It is like writing, for instance…no genius who ever lived has turned out first-class work at the first trial: he had to practice, practice, practice!”

This quote suggests that Kep approached marksmanship with the same attention to detail that he applied to writing. He saw time on the range repeatedly shooting at fixed distances as similar to extensive rewrites of a manuscript.

Kephart’s advice to aspiring hunters in Camping and Woodcraft was to “Serve your apprenticeship under a guide. He can teach you more in a week than you could learn by yourself in a year.”

He also wrote, “Don’t rely on ‘raining lead.’ The man who does his ‘darndest’ with the first shot is the one who gets most venison in the long run.”

In his classic book about Appalachian mountaineers, Our Southern Highlanders, he recounted the adventure of bear hunting with hounds. The book included anecdotes told in mountain dialect. One hunter is quoted as saying, “That bear outsharped us and went around all o’ you-uns.”

The book gave most Americans their first glimpse of backwoods life in the Southern Appalachians and was a national sensation.

Kephart’s career was during the early years of the conservation movement. At this time market hunting was giving way to sport hunting. Eventually, the lobbying efforts of organizations like the Boone and Crockett Club resulted in federal regulations. These regulations placed seasons and limits on hunting migratory waterfowl. Also, the states gradually began to manage wild game through seasons, bag limits and licenses.

George Bird Grinnell, famed naturalist and anthropologist, was the editor of Forest and Stream while Kephart wrote for the magazine. Forest and Stream promoted conservation and published articles by contributors such as Theodore Roosevelt. They also helped create the Audubon Society, so Kephart was no stranger to the conservation movement.

One of the wildlife management controversies of the early 20th century was the use of pump and autoloading shotguns. In his 1913 book, Our Vanishing Wildlife, William T. Hornaday devoted an entire chapter, “Unfair Firearms and Shooting Ethics,” to the impact of six-round repeating shotguns on duck and goose populations.

Kephart weighed in on the subject in Sporting Firearms, writing, “It is not the gun, but the gunner, who is to blame. Our passenger pigeons were not exterminated with breech-loaders, nor our buffalo with self-loading rifles.”

He did, however, advocate “uniform game laws, decently paid wardens, national breeding grounds and prohibition of the sale or import of dead game.”

A federal law came about requiring waterfowl hunters to plug the magazines of their shotguns, reducing their shots to three.

Kephart was a firm believer in the Second Amendment right to keep and bear arms. In 1921 and 1922, he published articles entitled, “When You’re Killed, Call A Policeman,” “Arms for Defense of Honest Citizens” and “The Right to Bear Arms” in Outing magazine. His viewpoint was probably shaped by the violent nature of traditional feuding in the Appalachians.

In the latter article, he wrote, “Within the past twelve years, about forty of my personal acquaintances have killed someone, or have been killed, in gunfights…I knew them individually…None of these homicides was committed by a professional criminal.”

He explained that the mountain code of honor insisted on armed retribution when personal honor was at stake. He pointed out that the results would have been the same with or without handguns. In comparing the Appalachians to more settled parts of the country, he wrote, “Crooks do not thrive, they do not even linger, where everybody carries a gun and knows very well how to use it.”

In the 1920s, Kephart devoted his energies to establishing the Great Smokies as a national park. He wrote and spoke on the subject, leading Congress, in 1926, to authorize the creation of the Great Smoky Mountains National Park. When he died in 1931, a 6,217-foot mountain within the new park was renamed in his honor. This was a fitting tribute to this great outdoorsman and pioneering outdoor writer.

In writing this article the author relied on The Writings of Horace Kephart. This is a master’s thesis by John Christopher Bowles in 1996 for Western Carolina University. It was also an excellent introduction to the 2011 edition of Camping and Woodcraft by George Ellison and Janet McCue.

From The Book of Camping and Woodcraft, 1906, The Macmillan Company.