by William Bell
in Guns, Rifles
0

With firearms, I like to “Keep it simple, Stupid.” I prefer revolvers, double guns and lever-action rifles because of their ease of use. With the latter, there are no magazines to lose or damage, and they’re usually ready to go right out of the box. On top of that, while there are big bores in powerhouse cartridges like the .45-70 Government, many lever actions are available in common handgun calibers, so you use the same ammo across platforms like cowboys back in the old days. This brings me to the 1892 Alaskan Takedown from Taylor’s & Company Firearms. 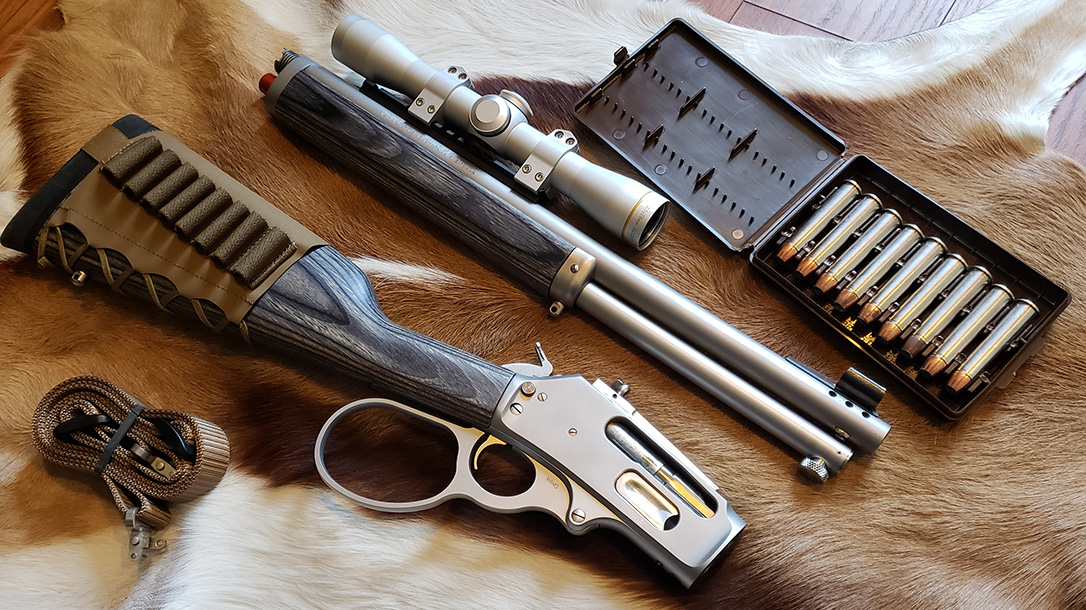 What first drew me to this gun was its combination of traditional looks, functionality and modern technology. This carbine is based on the time-proven Winchester Model 1892 invented by none other than John Moses Browning. But like many late 19th century/early 20th century long guns, it has a takedown feature that allows you to break the 34-inch-long gun down into two halves for easy storage and transport.

Taylor’s & Company Firearms offers the Chiappa-made 1892 Alaskan Takedown in two calibers: .357 Magnum and .44 Magnum. Every model also has black hardwood furniture with soft-touch rubber overmolding. You can also choose between hard chrome or black for the receiver and barrel. The red fiber-optic front sight is dovetailed into the barrel so it’s easy to adjust, and Taylor’s includes an optics rail with an adjustable peep sight at the rear.

For this article, I got my hands on a .44 Magnum model. It has a 7+1 capacity and a 16-inch octagonal barrel. The D-shaped lever is large without being as big as the loops John Wayne preferred. My test gun also looked all business with its matte black finish. The only highly polished parts were the bolt and the two locking lugs, the tops of which are exposed at the rear of the action. A once-over indicated a good deal of attention paid to the fit and finish, and the overall manufacturing quality appeared top tier. I didn’t notice a lot of stamping or laser etching on the gun, and the action worked smoothly. According to my Lyman digital trigger pull gauge, the average trigger pull weight was 4.7 pounds with no creep or overtravel.

This is a compact carbine that weighs in at just 5.9 pounds unloaded. The heavy octagonal barrel gives it a muzzle-heavy balance, which makes it swing and point more naturally. The rifle comes up to your shoulder quickly, and my eye was quickly drawn through the peep sight to the glowing red fiber-optic front sight.

To take the Alaskan down into two sections, the first step is to make sure the gun is cleared and completely unloaded. Next, use the lever under the magazine tube to rotate the magazine counterclockwise to unscrew it. The tube will slip forward out of the receiver and magazine ring. Now open the action lever and leave it open. Rotate the barrel 90 degrees to the left and you’ll feel the two halves give. Then just pull them apart. It doesn’t get much simpler, and reversing the process reassembles the rifle. Also note that there is no manual safety on this gun, but the hammer can be thumbed back to the first “click,” which will lock the trigger.

Like other .44 Magnum weapons, the Alaskan Takedown also chambers .44 Special cartridges. So, for my range excursion, I chose two .44 Special defensive loads from Black Hills and Hornady. For .44 Magnum rounds, I chose loads from Black Hills, Federal Premium, Remington and Sig Sauer. My first task at the range was obtaining some velocity figures for this ammo selection using an Oehler Model 35P chronograph. The carbine’s 16-inch barrel provides a lot more speed for these handgun cartridges. The muzzle velocities ranged from mild to wild, and you can see the results in the performance table.

Federal’s 180-grain JHPs were the fastest at 2,102 fps, producing 1,775 foot-pounds of energy (fpe) at the muzzle. The recoil with the lighter bullets, especially the .44 Special loads, wasn’t bad, and none of the ammo was punishing. I also didn’t notice any excessive muzzle flash or blast while shooting outdoors during daylight. And with the Black Hills .44 Special ammo, the Alaskan Takedown honestly felt like a pellet rifle.

Because of the rifle’s iron sights, I decided to test its accuracy at 25 yards, shooting all of my five-shot groups from the bench using a sandbag rest. Right out of the box, the gun shot low with most of the ammo. The ammo that came the closest in matching my point of aim was the Federal 180-grain JHP load. But the most accurate rounds were Remington’s 275-grain Core-Lokt JHPs, which had a best group measuring 1.21 inches wide and an average of 1.67 inches. Second place went to the light Black Hills .44 Specials with a best group of 1.27 inches and an average of 1.75 inches. These should make great small-game or plinking cartridges.

Next, I moved my target stand back to 50 yards to see how the Alaskan Takedown would fare using the same oblong B-27 target center that I used at 25 yards. Again, every load shot a tad low, but I compensated with some “Kentucky elevation,” so to speak. All of the hits stayed on the paper, and the best three-shot group came in at 2.27 inches with the Black Hills .44 Special ammo. Most of the rest had three-shot groups in the 3.5- to 5-inch range. At 50 yards, the fiber-optic front sight covered about a third of the target.

To see how the Alaskan Takedown might fare on medium-sized game, especially for a survival scenario, I set up an anatomically correct deer target at 50 yards. From a standing position using a post as a makeshift support, I shot three groups with .44 Magnum rounds from Black Hills, Remington and Sig Sauer. Unfortunately, I didn’t hold over quite as much as I should have, and most of my impacts were below the target’s heart area. Had the elevation been correct, however, all but two shots would have hit the heart. Thus, I have little doubt that the 240-, 275- and 300-grain JHP bullets would have been effective, and they are good brush-buckers, too.

I also wanted to see how the Alaskan Takedown would do in a lethal-force situation. For this scenario, I used a realistic “bad guy with a gun” target set up at 50 yards. I also loaded the gun with Federal’s .44 Magnum JHPs and Hornady’s .44 Special FTXs because both types offered less recoil while offering good velocities, plus they hit closer to the point of aim. I alternated cartridges and filled the magazine, then backed off 7 yards.

My first exercise was to shoot as fast as I could without using the sights—just pointing the carbine and firing all seven rounds. I had no trouble at all with this, and all of my shots went into center-mass. Once I reloaded, I moved back to 25 yards. There, I fired off-hand using the sights, alternating with shot to the chest and one to the head until I was out of ammo. Two of the headshots were in the “fatal triangle” with one in the forehead. All of the center-mass shots were inside the square scoring area of the target.

I then retreated back to 50 yards, loaded the Alaskan Takedown as before, then engaged the target from behind a barricade, shooting two shots while standing from the left side, two while standing from the right side, and three while kneeling from the right side. Two shots went low outside the scoring squares but stayed within the thoracic area. I could definitely tell the difference between the .44 Magnum and .44 Special loads when firing, but the bad guy was definitely DOA.

After that, I did some informal plinking to make sure the Alaskan Takedown functioned reliably. I levered in rounds sideways and even upside down, but none of the cartridges dropped out like I’ve had happen with some other lever guns. I had one feeding bobble with a .44 Special round—the sole malfunction of the day—but it was easily corrected.

For the most part, the .44 Specials worked just as well as the .44 Magnums. An advantage I see in a lever gun like this is being able to fire a couple of rounds, then load a couple from your belt, pocket or wherever. As long as you have cartridges, you don’t have to shoot the gun dry. You can load as you go. I was really impressed with this versatile little carbine and truly believe it has what it takes to make a good survival weapon. For more information, visit taylorsfirearms.com.