As an adult, tantrums are frowned upon. I was getting close to a meltdown. Daily 3 p.m. phone calls to my Class 3 dealer, Stonewall Arms, were routine. I inquired about status of my CZ S2 Reflex suppressor. I had plans to equip it, as expected, to my CZ Scorpion EVO 3 S2 braced pistol — AKA the CZ Micro Scorpion. 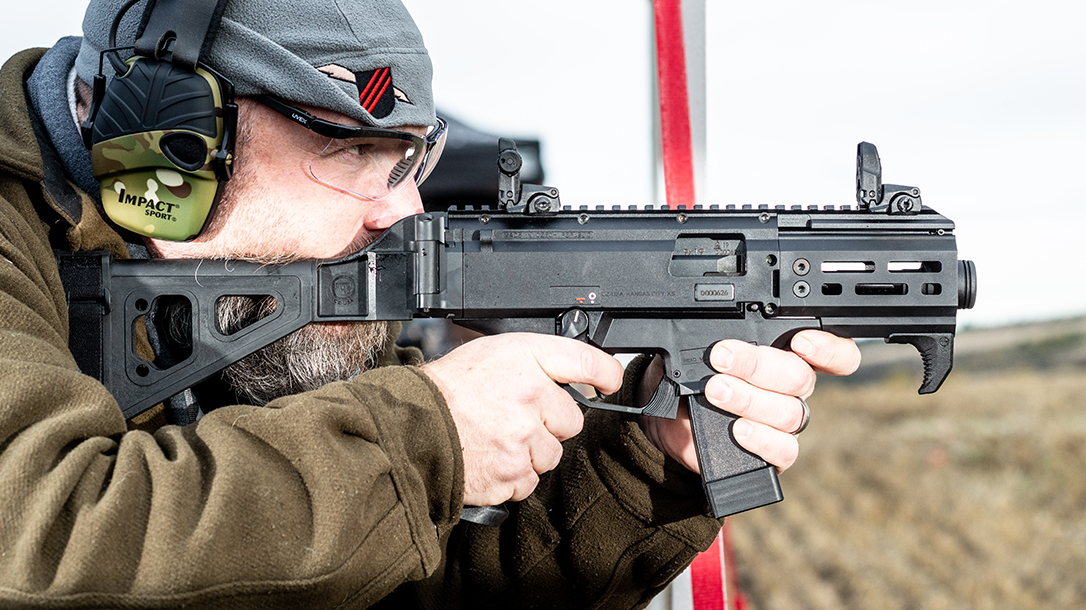 Stonewall’s General Manager, A.J., was cordial every time answering the phone. He delivered gut punch after gut punch that the postman still had not brought goodness to my life in the form of a BATF Tax Stamp. The agony had been no longer than the normal wait — sad, but true when it comes to Class 3 procedures. Even with that in mind, after 11 months of waiting on federal bureaucracy, I was getting cranky. Adding insult to injury, I sensed A.J. started to enjoy my suffering.

The Process and My CZ Micro Scorpion

The Class 3 process is a “hurry up and wait” affair. You walk into your Class 3 dealer — there are not many of these as compared to typical FFL gun shops — and start the process of acquiring your suppressor, SBR, full-auto weapon, etc. Typically, you pay for the desired item, which for me was the CZ S2 Reflex suppressor. Your dealer hands you fingerprint cards. You will also need to get at least three passport photos for use with ATF Form 4 paperwork.

Then, off you go to your local police department. I suggest calling ahead to verify if specific hours are set aside for fingerprinting. Up to about 18 months ago, you would have needed your local LE to sign off on the ATF Form 4. This is no longer the case, which saves significant wait time and negating need for a return trip to your local law enforcement agency.

Upon return to your Class 3 dealer with fingerprint cards and photos, you can start the finer points of filling out the ATF Form 4. You can attempt this form on your own, but I strongly suggest using your dealer’s experience so that mistakes are not made; mistakes require the process to start again when the ATF returns the incorrect form after months of lost time. Send a $200 check or money order made out to the BATFE along with Form 4 paperwork to Portland, Ore. The initial process takes anywhere from a couple days to one week depending on motivation and timing of purchaser getting items completed.

Don’t Be a Pain

All the anticipation of the initial purchase process is now tempered by waiting. The ATF sends the fingerprint cards to the FBI for processing. The ATF assigns your Form 4 to an examiner based on your last name and workload of staff. Wait time is between six and 12 months. There is no rhyme or reason to wait. There is no communication updating progress.

If you get anxious about your Form 4 status you can roll the dice and call up the Martinsburg, W.V., ATF office at (304) 616-4500. It could be urban legend, but scuttlebutt is if you become a PITA (Pain In The Ass), the ATF relocates your paperwork to the bottom of a large pile of other pending Form 4s. You need to know the serial number of the item in which you are seeking approval. The ATF will then ask you the name of the Transferor (this is the company or person who sold you the item) and they will ask you the name of the Transferee (this is typically yourself or the name of the Trust if you used a NFA Trust). If those items match, the ATF will give you one of the following status:

Unfortunately, they will not tell you any further information. For me it took one full year, but I got what I wanted: A 9mm CZ Scorpion EVO 3 S2 braced pistol (Micro Scorpion) purchased to mate up to the CZ S2 Reflex suppressor. Neither is complete without the other in my opinion.

The corporate history of CZ dates back to 1936 when a political decision by the National Defense Council established an arms factory in the town of Strakonice. In January 1937, production of military and civilian arms commenced. The first products were aircraft machine guns, military pistols and rifles. During the Nazi occupation, the CZ plant was forced to produce and repair military arms. Events leading up to and through WWII, combined with subsequent Cold War, removed the CZ name from the U.S. market for the last half of the 20th Century.

In 1990, production for the Czechoslovakian armed forces ceased. CZ turned the newly available capacity to expanding production of arms for hunting and sporting purposes, as well as exports for police and military units. By the 21st Century, CZ evolved into one of the largest firearms producers in the world.

The CZ EVO3 Scorpion traces its development back to a 2002 Slovakian SMG design labeled the Laugo. CZ purchased the Laugo’s design rights in 2009 with the eventual name changed to EVO 3 Scorpion. CZ listened to feedback from customers and revised the EVO3 Scorpion more to the U.S. market in the form of the Scorpion EVO 3 S2 Pistol Micro with the brace, known in many circles as the CZ Micro Scopion.

The Micro Scorpion originated in response to a drug interdiction unit requesting a smaller variant of the initial EVO 3 S1 model. In short, pun intended, the Micro Scorpion evaluated herein is a pistol featuring a stabilizing brace allowing civilians to benefit from the design tweak. Braces have become a staple of non-typical handguns/pistols in the US.

Many turn to a 9mm platform for the reduced recoil and muzzle blast represented by the 9mm pistol cartridge compared to a rifle. Others point to it for the ease of suppressing the 9mm, especially when 147grain 9mm loads are utilized. CZ has more recently expanded its product line to include suppressors. CZ USA has become a “one stop shop” for covering the gamut of civilian sporting use, competition, and tactical products. The manufacturer’s suppressors include the CZ Rimfire, CZ Rimfire Integral, CZ S2 Reflex, and CZ Ti Reflex.

CZ did not mimic other suppressor designs; instead, the manufacturer chose its own path, backed by engineering, experience, and science. The benefit of dealing with CZ USA for suppressors is that by being such a large firearms manufacturers, its suppressors are not produced in a vacuum. It is understood that suppressors are not solely judged in terms of decibel reduction. What am I talking about? Ease of mounting on a weapon, weight, length, and durability all comes into play.

CZ created the S2 Reflex specifically for use with its Micro Scorpion 9mm. The goal was to keep overall length as short as possible and fit under Scorpion’s HB Industries handguard. The 2-inch reflex chamber allows for it to fit over a portion of the barrel maximizing volume, which translates into better sound reduction without disturbing natural balance point of the Micro Scorpion. The extra volume associated with the reflex section allows 10 dB more of sound reduction! A fully welded titanium can, the CZ S2 Reflex suppressor weighs just 9.6 ounces.

CZ decided on direct thread mounting for the S2 Reflex for a variety reasons, including weight savings and accuracy. The CZ Micro Scorpion’s 4.12-inch barrel features 1/2×28 threaded muzzle. With quick detach (QD) mounting, a muzzle device of some sort is required to be installed on your barrel for suppressor to be affixed to. There is nothing wrong with this style; many favor the convenience of moving a suppressor between multiple weapons and/or needing a flash hider on a weapon when the suppressor is not installed. However, the mount contributes to several additional ounces of weight on the end of your barrel, as well as more overall length impacting balance of weapon once the suppressor is mounted.

A direct thread suppressor, such as the CZ S2 Reflex, mounts to your barrel without an intermediate connection; thus, it tends to be more conducive to accuracy than QD suppressors. Direct-thread suppressors also provide a more consistent return to zero, and they tend to have less point-of-impact shift than QD designs between installation/removal cycles.

The SMG’s most prominent role, indeed its raison d’être stretching back to the WWI trenches, is as a CQB weapon. Ease of sound suppression is another important SMG advantage. The increase in terrorism, organized crime, and drug smuggling with the resultant militarization of law enforcement teams to deal with these well-armed opponents found a new home for the 9mm SMG. Unfortunately, there are weapons that most of us will not be able to experience or handle in their original form — please see “fun switch” full-auto. The CZ Micro Scorpion with a CZ S2 Reflex suppressor mounted is pretty damn close to the original form as intended by CZ designers. You can’t ask for more than that. For more information, please visit CZ-USA.com.

*Bullet weight measured in grains, velocity in fps by chronograph, and average accuracy in inches for best five-shot groups at 50 yards.