It is often said that big surprises come in small packages, and Springfield Armory has again proven that true this year with its new takedown AR pistol, the Saint Edge EVAC. 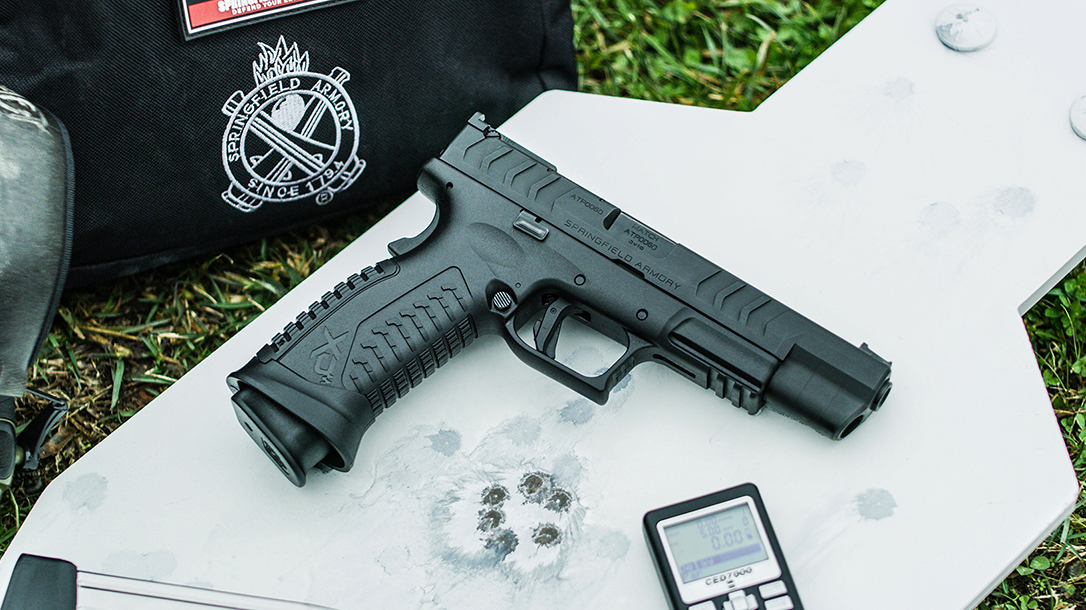 The Edge EVAC pistol is built with the same quality and attention to detail that has come to be expected from Springfield Armory’s premium Saint rifle and pistol lines. The EVAC features a 7.5-inch, 416-stainless-steel, Melonite-treated barrel, an enhanced nickel-boron-coated single-stage flat trigger, and an M-LOK free-floating handguard. It also features the Accu-Tite tension system; this provides a wobble-free fit between the upper and lower receiver that keeps the pistol from sounding like an old ranch truck driving down a dirt road when on the move. I’ve spent countless hours tracking down rattles in my ’73 Chevy; I don’t need to be doing it with my firearms.

As you might already be aware, all these features and specs are not what truly make the EVAC so exciting. The Gear Head Works Tailhook MOD 1 side-folding brace with the Law Tactical Gen 3-M folding adapter takes the overall length from 26.5 inches down to a very packable 18 inches. However, it’s the inclusion of the Pantheon Arms Dolos takedown system that really makes this pistol something else. Springfield Armory worked with Pantheon to make sure that the system was built to its demanding specs and told me that Pantheon made some proprietary enhancements to the system to ensure maximum performance and reliability.

Named after the Greek god of trickery, the Dolos system allows the user to quickly detach the barrel from the upper receiver by replacing the barrel lug with a tri-lug and putting a lock collar on the barrel. Basically, that means that with a little pull and twist, the barrel comes off. With the barrel removed and the stock folded, this pistol has approximately the footprint of a toaster; however, the Edge EVAC brings the heat like Oster only wishes it could.

Breaking Down the Takedown 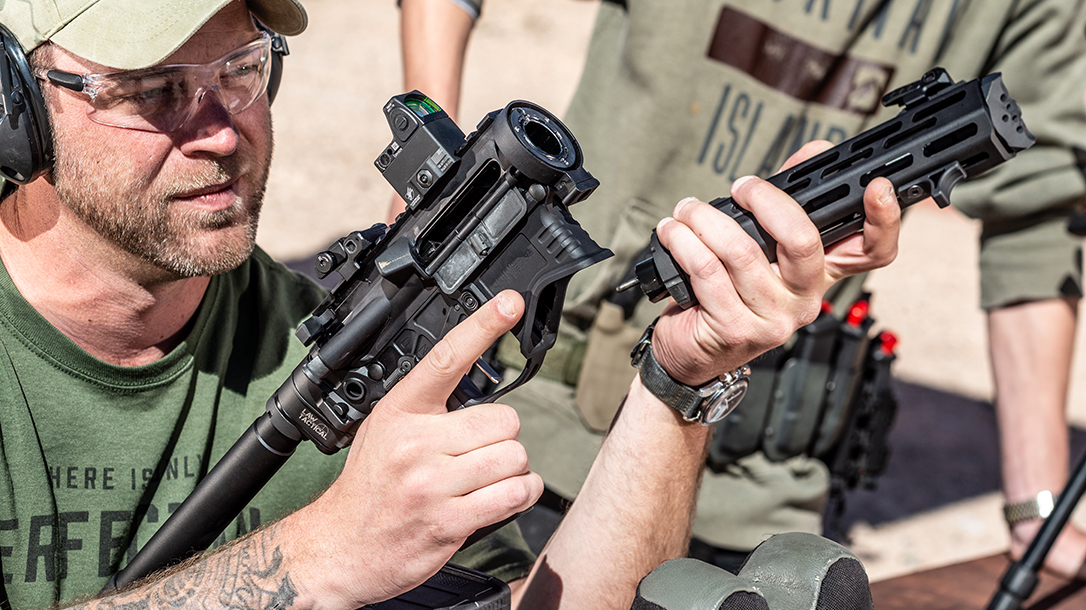 Preppers and survivalists often feel a breakdown rifle is ideal for a bug-out situation, being more packable and concealable. Generally, this brings to mind firearms along the lines of the Ruger 10/22 Takedown, the Savage Model 42 Takedown, and the Henry Survival Rifle. While guns like these have their place, they’re missing either the firepower, capacity or true stowability that many people want, especially in survival situations in urban areas where these things can mean the difference between life and death.

Traveling with weapons in dangerous situations sometimes requires discretion; the EVAC provides that. The pistol comes with a black nylon storage bag that measures 13 inches by 10.5 inches by 5 inches. The bag has no labels or markings—just a three-sided zipper and a shoulder strap. Any observer seeing you walking down the street or from your truck to a hotel room would make no assumptions. Maybe it’s a soft cooler with a tallboy and a sandwich. Maybe it’s a CPAP machine or a Dopp kit. Or maybe you make your own continental breakfast and actually travel with your toaster.

Transitioning from carrying the bag on your shoulder to engaging targets takes surprisingly little time. On the range, I was able to switch from carrying to shooting in less than 10 seconds. Assembly is quite easy: Take the receiver, fold the stock closed and lock back the bolt. Take the barrel and handguard and line up the gas tube, then line up the barrel and seat. Rotate the assembly until the ratcheting system locks. Then insert a magazine and drop the bolt. You’re ready to engage.

Another advantage of this style of takedown system is that these rifles are easier to clean than most, as being able to remove the barrel provides better access to the chamber area. 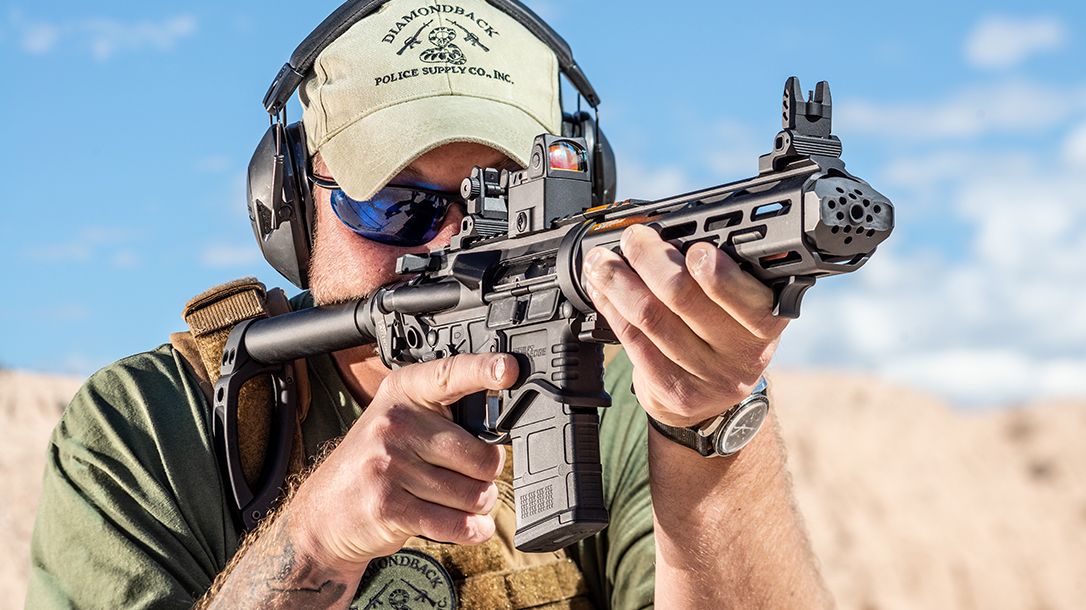 When I first beheld this pistol and the Dolos takedown mechanism it sported, I was intrigued. While the EVAC and all of its components are built with precision, it is not by definition a precision rifle. It’s an AR pistol with a 7.5-inch barrel. Still, I had questions about the repeatability of a zero after removing the barrel.

On the range, we did find an occasional shift from zero—usually a little high with varying windage, but only on the first shot after each reassembly, with the following shots returning to our original zero. This shift didn’t always happen. And when I did notice it, it was never what I would consider out of the range of acceptability for a system like this. The day I conducted this testing, I only had access to a 50-yard range, so I’ll be interested to hear from other testers and shooters regarding performance at longer distances.

One of the most striking features of the EVAC pistol is its muzzle device. Apparently, it’s so new that Springfield Armory has yet to name it. The pistol smiths told me that they’re just referring to it as “a proprietary muzzle brake designed specifically for the EVAC.” Made from black-nitrided steel, it’s designed to match the contour and symmetry of the EVAC and vent the blast away from the shooter, which it did with zeal and would definitely add insult to injury if you were on the receiving end in a CQB situation.

The trigger was nice and crisp as one would expect from any premium rifle of the Saint line. The Edge EVAC has the shorter Reptilia CQG pistol grip, which still fits great in larger hands. The forward hand stop keeps your support hand where it should be without looking or feeling cumbersome, and the ambi safety selector ensures that you always have the controls you need, regardless of your preferred shooting hand.

All of this comes together to make this pistol a precise machine that’s a pleasure to manipulate and shoot. From the Hellcat to the Edge EVAC, Springfield has been at the top of its game lately. The Edge EVAC delivers effective prep for emergencies yet features discreet storage in tight spaces and will be a welcome addition to any survivalist’s gear complement. I probably left you wanting more. If you want to try the Edge EVAC out for yourself, good. However, it’s not on shelves yet, though I expect a June release. For now, keep your eyes peeled on Springfield-Armory.com.

This article is from the summer 2020 of Survivor’s Edge Magazine. Grab your copy today at OutdoorGroupStore.com.