Back in June of 2018, our brother website Tactical-Life.com reported that a semi-auto version of the much-sought-after AA12 shotgun was coming to the civilian market. Sol Invictus Arms partnered up with one of the gun’s designers for the civilian version. There’s no other way to say it — we instantly became aroused. And we’re not ashamed of it. Then we waited and waited and waited. A year later and still no AA-12 shotgun. So what happened? 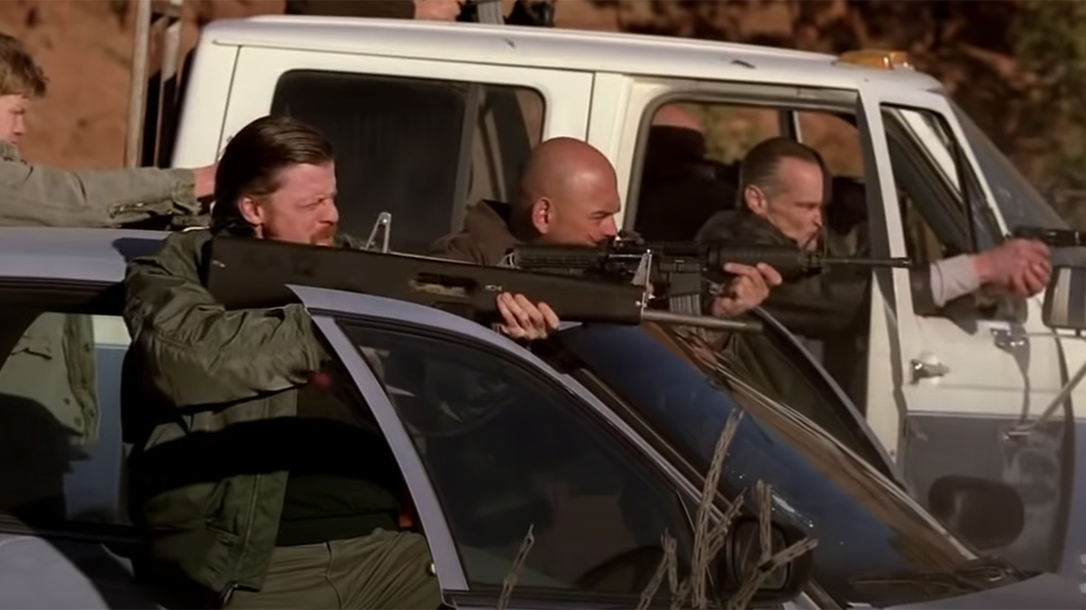 We spoke off-the-record with Sol Invictus Arms back in May about the AA-12 shotgun. Certain details of that conversation were not fit to print; so we didn’t. However, those details just came to light in an open statement from Sol Invictus President Mike Conn. In it, he discusses the ATF’s letters to seize the semi-auto AA12 shotguns produced by BC Engineering. Here is his full statement:

Mike Conn On the AA12 Shotgun

The various letters in question have been sent since at least April of 2019. We have a record of ATF notifying owners of AA12 Shotguns and collecting them since that time. These AA12 Shotguns were not manufactured by Sol Invictus Arms. To date, Sol Invictus Arms has not produced a single AA12 for civilian sale precisely because of the ongoing ATF investigation.

We are hoping that the following backstory can provide more transparency on the situation for all those interested.

First, a little history. Jerry Baber, of Military and Police Systems, Inc. and Boje Cornils, of BC Engineering, both held ownership of the AA-12 shotgun. Their shops are separate and many miles apart from each other.

My company, Sol Invictus Arms, wanted to purchase the AA-12 shotgun to produce both the full-auto version and the semi-auto version. We made repeated offers to Jerry Baber to purchase all of the molds and tooling, and CAD/CAM files that he possessed for the shotgun, as we originally thought he was the sole owner. He repeatedly gave us a ridiculous price for the design, tooling and molds. When we asked to see all the blueprints and CAD files for both the full-auto and semi-auto versions, he said he didn’t have those and the semi-auto version was a waste of our time. He said that German guy Boje had that. We asked about contacting Boje and Jerry refused to provide his contact information.

We then did some research and found BC Engineering and Boje Cornils. He explained that he was a partner of Jerry’s and that he had designed a closed bolt semi-auto version of the AA-12 and that Jerry wanted nothing to do with it. When we asked more about how he and Jerry worked together, Boje told us that he did the engineering to make the full-auto version work after Jerry had purchased the plans from Max Atchison, the original designer of the shotgun who had never built anything other than a wooden prototype.

He also explained that he was the only person to ever build an AA-12, either in full-auto or semi-auto. [He then explained] that he was the sole owner of the Patent on the AA-12 gas system and that all Jerry had was the tooling and molds, which Boje had in fact manufactured for Jerry. We then inquired about purchasing the designs and patents for the AA-12 shotgun from BC Engineering. We worked out a price to purchase all the designs and the entire BC Engineering shop. Upon completion of the sale, BC Engineering closed their business and turned in their FFL Logbooks to the ATF; [that] is standard practice when an FFL closes. This is how the ATF has found the owners of the Semi-Auto AA-12s that were purchased from BC Engineering.

As you can imagine that did not sit well with Jerry Baber. We even went back to Jerry and made what we felt was a fair offer for the tooling and molds. I can’t repeat the response that we received.

Call to the ATF

It was then that Jerry decided he was going to cause some trouble for Boje and Sol Invictus Arms. He called the ATF and claimed that the semi-auto shotgun was easily converted to full-auto.

This led to an investigation related to the AA-12 shotgun. And Jerry, I believe, got more than he bargained for. It seems in the beginning of Boje and Jerry’s relationship, Boje asked if he needed any special licensing to produce the shotguns. Boje was told by Jerry that none was needed as he was working under his license. So for several years, Boje manufactured AA-12 full-auto machine guns in his shop without a license or an SOT. But Jerry proceeded to enter the shotguns in his gun book and form 2 as though he manufactured them. Later Boje did get the proper licensing. However, he never got a marking variance to produce these guns for Military and Police Systems and Jerry continued to enter them in his gun book and form 2s as though he had manufactured them.

Boje also manufactured approximately 22 AA-12s using full-auto receivers, but only firing in semi-auto. These were marked as being manufactured by BC Engineering and sold for between $5,000 and $7,500. To our knowledge, these are the AA-12s referenced in all the of ATF’s actions referenced in this article by AmmoLand News.

All of this, as you can imagine, led to a criminal proceeding. This has been going on for over a year. During that time, we had a semi-auto AA-12 taken by the ATF and sent to the technical branch for review as part of the criminal investigation. This shotgun has never been returned to us, even though we have a SOT for full-auto weapons. It was determined that the semi-auto that we owned, as well as the estimated 22 others, were built on a frame/receiver that was originally made for a full-auto AA-12. In the eyes of the ATF, once a receiver is full auto it is always full auto. Therefore, this is why the letters have gone out to turn in the “semi-auto” AA- 12s that exist.

Now,as far as the talk about the AA-12 semi-auto shotgun being easily converted to full auto. First, the semi-auto fires from a closed bolt, not an open one like the full-auto version. The fire control group has no common parts between the two models. Second, the receiver hole pattern and orientations are different between the full-auto and semi-auto models. The next thing, is that it takes eight different parts or changes to go to a full-auto version. Parts that would have to be manufactured from scratch using proprietary knowledge of the parts in question. Therefore, I can confidently tell you it is far easier to make an AR-15 full auto than an AA-12.

Where Does That Leave Us?

[Then there are] the difficulties that Sol Invictus Arms has faced producing the semi-auto version. We were advised once all of the legal proceedings started with Boje to wait for the rulings that would be issued by the ATF before proceeding. The ATF said that while we are not in any jeopardy ourselves, that it would be wise to wait for all the criminals matters to be resolved. And even once that is done, we will need to build a semi-auto AA-12 and register it with the ATF as a machine gun and send it to the technical branch for review. This is after we have had no less than six ATF agents and technical inspectors in our shop that have all stated that it is not easily converted.

Here is the biggest problem that we face with all of this: Because the ATF took our only semi-auto AA12, we are having to hand-make every part for this gun to be able to send the technical branch their sample. The cost of molds and fixtures to produce this shotgun in quantity is over $500,000. While we had started working on many of the molds and fixtures, we stopped once the criminal action began.

We have already spent well over $750,000 dollars in the acquisition and additional engineering that has been done. We feel confident that we can produce a semi-auto version that will be approved by the ATF, as we have even received some guidance from them to do so. It is just the time it takes to produce a prototype to send them is quite long.

I hope this provides some clarity on the ATF notice that has been circulating recently. I would also like to clarify that, in contrast to what I have read in some reports, our phone lines are not disconnected at all. However, we did experience some power outages as a result of the passing storm Tuesday into Wednesday. I am actively working now to provide these details to the media contacts that have reported on the matter.