1 of 3
SOG Pillar vs. KA-BAR D2: Extreme Battle of the Blades
The SOG Pillar (left) and the KA-BAR D2 Extreme Fighting/Utility Knife (right) 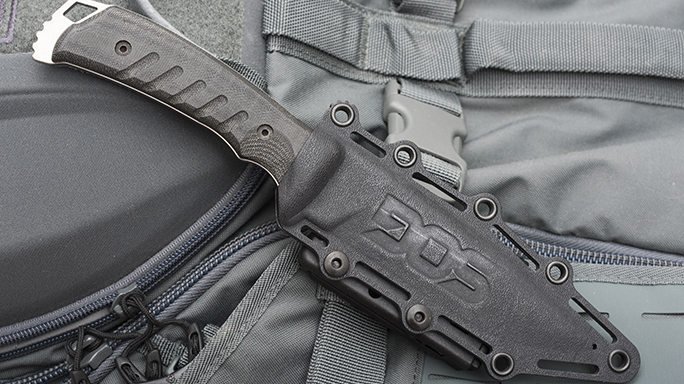 2 of 3
SOG Pillar vs. KA-BAR D2: Extreme Battle of the Blades
The SOG Pillar 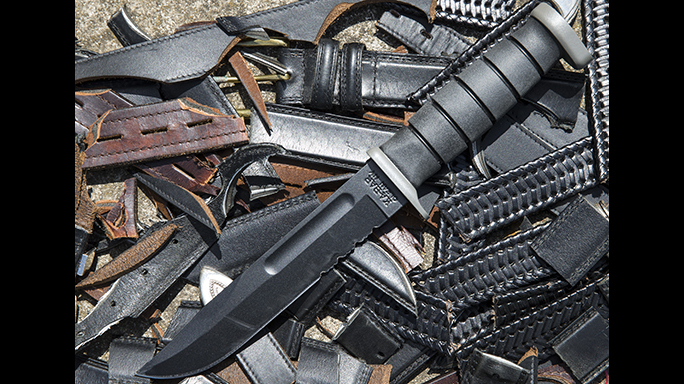 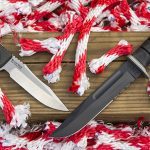 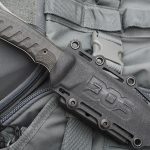 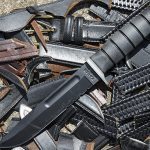 The big draw at SHOT Show each year is, of course, firearms. But this year, I happened across a gem that made me do a double-take. I saw a new tactical knife with sleek, aesthetically pleasing lines that used of one of my favorite steels—CPM S35VN. This knife, the SOG Pillar, was a nice departure from the company’s standard fare with regard to steel composition. It checked all of the right buttons for me. I knew I had to review it for our heads-up match against another blade.

For several reasons, I decided to match it against the KA-BAR D2 Extreme Fighting/Utility Knife. As I searched for comparable products, I could not find another production tactical knife that used CPM S35VN. There were plenty of custom blades or limited-edition Mid-Tech offerings, but no true production tactical knives in CPM S35VN. There certainly none in the sub-$200 price range of the SOG Pillar. It seems SOG has carved out an enviable position for itself with this new tactical offering.

Further, the KA-BAR D2 Extreme Fighting/Utility Knife was one of the first—if not the first—production knives constructed of D2 steel. Like the SOG Pillar, it established a position as a unique offering. There’s something symmetrical in reviewing these groundbreaking blades against each other.

Aside from the universal recognition and respect associated with the KA-BAR knife, I was also looking for one that sported more of a premium steel than what’s typically found in production knives yet stayed within the $100 to $200 price range. Surprisingly, there aren’t many production knives that meet that criteria, but this particular KA-BAR did. After getting both in hand, it was time to match them up to see how a next-gen fighter compared to a military classic.

SOG: Out Of The Box

SOG’s Pillar is a tactical knife with a 5-inch blade and canvas Micarta grips. It’s made of CPM S35VN, which is known to be an extremely tough and wear-resistant steel that’s very corrosion resistant. It’s heat-treated to RC 59-61 and has a full tang with a lanyard opening at the end of the handle. The profile is similar to SOG’s standard styling, including the appearance of fins on its spine along with skillfully done jimping.

The blade is 0.16 inches thick, and the knife’s overall length is 9.9 inches. Additionally, the Pillar comes with a highly functional Kydex sheath with a Tek-Lok belt system for reversing hands and carry angles for the sheath. It has an MRSP of $254 but can be found in stores for about $190.

KA-BAR: Out Of The Box

With the styling of the classic KA-BAR knife, the D2 Extreme Fighting/Utility Knife sports similar specifications to the original. However, there are a few enhancements. Rather than standard 1095 steel—used on classic models today—KA-BAR uses D2 steel. D2 is one of the higher-performing alloys for impact resistance and edge retention. Another augmentation is the use of Kraton G for the grip material rather than stacked leather rings.

With a blade length of 7 inches, the overall length of the KA-BAR model is 11.88 inches. The knife also sports a similar blade thickness as the SOG Pillar, coming in at 0.188 inches thick. Rather than sport an exposed tang, the KA-BAR is fitted with a powered metal butt cap that is useful for hammering things that need to be hammered, including adversaries.

The KA-BAR model that I received came with a nylon sheath that’s just about as good (or bad) as what comes with most other production knives. However, KA-BAR has SKUs for the knife with a hard plastic or leather sheath. The MSRP for the sample model is $175, but with judicious shopping you can find it for about $130.

Neither knife came out of the box with a paper-slicing edge. However, the SOG Pillar seemed to be a more efficient rope slicer/cutter. I acquired a bit more than 42 feet of 0.63-inch-thick contractor rope to test the cutting capabilities of both knives in terms of push and pull cuts.

Additionally, I used my weak hand to bear down with both knives to cut the rope like a chef might cut carrots or celery. With this test, the SOG Pillar had a cleaner pull and required fewer strokes and less effort to cut through the rope than the KA-BAR D2.

On the other hand, when it came to cutting several old leather belts, the KA-BAR seemed to grab the free-hanging leather better and slice through it more easily. However, for precision cuts and cuts on supporting material (like a 4×4), the Pillar still seemed to have the edge.

With regard to size and balance, both knives had advantages. Because the knives have a 2-inch difference in terms of blade length, it’s not fair to call one a straight-up winner because there are other knives with blade lengths that match these models.

The SOG Pillar definitely had a more neutral balance, making it nimbler in the hand to use. On the flip side, the longer blade of the KA-BAR D2 provided more momentum for chopping cuts (think survival situations) and a little extra length for deeper penetration than the Pillar to more easily reach vital organs and the like.

Speaking of which, I put both knives to the test with an old COBOL programming book from years ago. I held them with an icepick grip and drove them into the programming book as hard as I could to see which would penetrate farther. Despite the difference in their sizes, the results ended up being quite close. The deepest indication of penetration by the KA-BAR found in the book was page 439. The tip of the SOG Pillar went through to page 417. The 0.125-inch difference wasn’t much, but the KA-BAR D2 fighter won that round.

Both knives have much to offer in terms of versatility. Although they can be deployed in duty or combat situations, the SOG Pillar has an advantage of being able to be carried concealed much easier because of its shorter and flatter profile. On the other hand, the KA-BAR’s longer blade makes it a more viable chopping tool in a survival situation or for hacking cuts. So, in this regard, it’s pretty much a wash.

The KA-BAR D2 fighter does not have a full-width tang but rather a rat-tail tang fitted into a metal cap (pommel) for support. For lateral strength, I generally prefer a full-width, full-length tang as found with the SOG Pillar, but the KA-BAR style served our military well for decades. Many will argue that if you use a knife for its intended purpose, great amounts of lateral strength shouldn’t be required. But if the knife is the only tool you have in an emergency, it tends to see harder use than normal in some situations.

Both knives offer a little something extra as well. With the KA-BAR, you get a nice guard to prevent your hand from slipping and a pommel for hammering or making strikes against an opponent. The Pillar, though, has quality jimping on the spine. This feature helps better control the knife when more exertion is required for cutting. It’s well done and extremely comfortable to use.

On paper, CPM S35VN has an advantage over D2 in edge retention and toughness (chipping), but it would take a dedicated user to bear that out in the field. However, CPM S35VN has a significant advantage when it comes to corrosion resistance, besting even 440C by a high margin.

D2 steel is only somewhat corrosion resistant and typically needs to be maintained more often. This feature might be enough to sway you to CPM S35VN if you’re willing to pay the price premium over D2 steel.

Both knives offer a suite of favorable features considering their price point, and especially when stacking them up against their competition, or lack thereof, in the production market. There’s some overlap in functionality, but each model offers some functionality the other does not. Each will excel in specific roles, and the decision is best left to the user who understands their strengths and can choose the best fit for the job at hand. 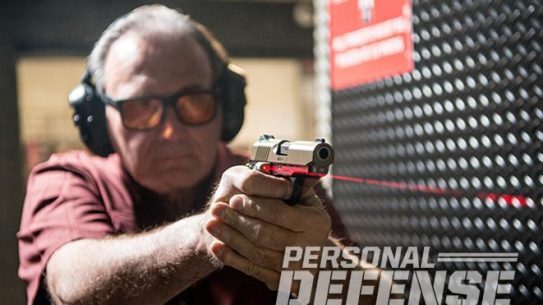 Take fast and furious aim with some new low-light dominators from Crimson Trace at...

Joe Biden, Deer and a Gross Misunderstanding of the Second...

Operation Eagle Claw: The Failed Attempt To End the Iran...