Not everything at the recent Athlon Outdoors Rendezvous in the Grand Tetons made a great deal of noise. SilencerCo was onsite to demo its extraordinary line of trend-setting sound suppressors. The SilencerCo Omega 36M suppressor offers unmatched performance and versatility. 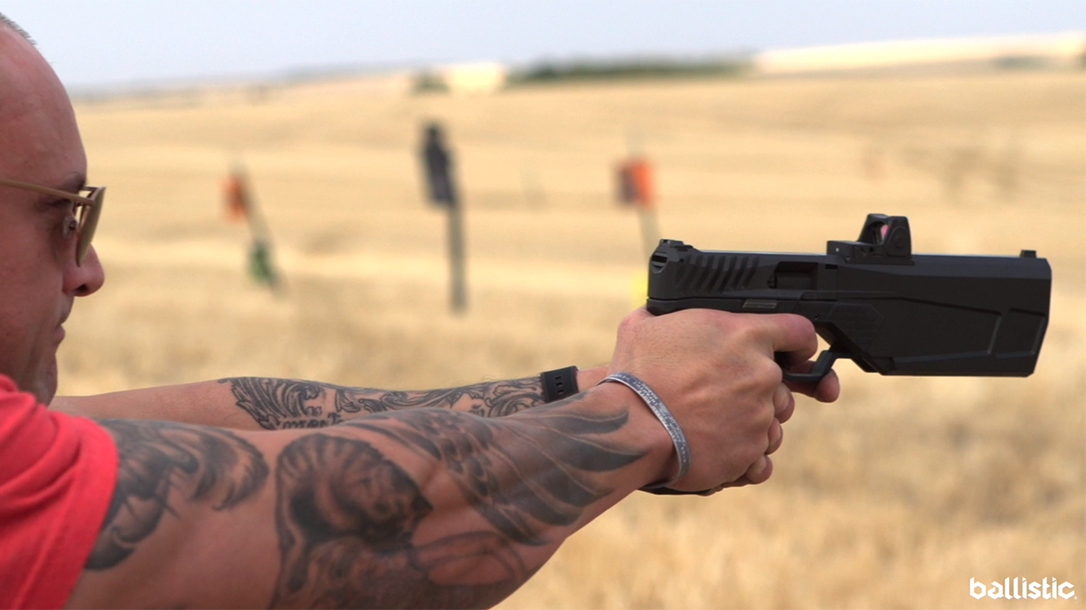 Sound suppressors are expensive, and the administrative gyrations required to own one are onerous. As a result, it is intriguing to imagine the possibility of a single registered sound suppressor that could be used on most everything in the gun box. SilencerCo has actually pulled that off with the Omega 36M.

The SilencerCo Omega 36M is meticulously crafted out of such exotic materials as titanium, 14-4 stainless steel, Inconel, and Cobalt 6. You can split this modular can roughly in half for greater stealth. This thing will run your .22 plinking piece, your 9mm combat handgun, your favorite Stoner black rifle, and your .338 Lapua Magnum sniper rig. If you were on a mission to Mars and could only have one sound suppressor to help defend against the belligerent Martians we all know are lurking there, this is the one you’d pack.

In its long form the SilencerCo Omega 36M provides maximum suppression. Thread off the distal bit and swap the end cap to the remaining tube and you have a shorter, stealthier platform. Any tools you might need are included.

This two-piece design features a fully-welded core both front and rear. Exotic materials provide superlative heat and wear resistance. A black Cerakote finish is both rugged and sexy.

The included mount interfaces with SilencerCo’s .22- and .30-caliber flash hiders and muzzle brakes. To mount and dismount the can you simply loosen the lock ring and give the can a spin. By outfitting your favorite black rifles and precision guns with these muzzle attachments the same can zips on and off literally in seconds.

Removing the Charlie ASR quick-release device lets you set up a direct-thread mount. In this configuration the Omega 36M will run on any 9mm submachine gun threaded 1/2×28. This mount will fit most of those nifty 9mm AR pistols and carbines as well. HK three-lug mounts are also available.

Additionally, the Omega 36M will accept a piston mount and LID for use on Browning-style recoil-operated handguns. LID stands for Linear Inertial Decoupler, and this thing is the coolest invention since toilet paper on a roll. The LID or Nielson Device captures some of that muzzle chaos to give the front of the slide a little tap with each round fired. I’ve never had a malfunction with a LID-equipped suppressed handgun.

Suppressor performance is a fairly subjective thing. Decibel numbers are the place to start, but there just seems to be more to it than that. In my experience the Omega 36M performs as well in each of its disparate roles as do respective dedicated high-end suppressors.

With 147-grain subsonic ammo the Canik TP9 SFx METE is almost comfortable when fired out in an open space. All centerfire pistol cans are fairly noisy. However, the Omega 36M remains competitive with any dedicated handgun suppressor I have encountered. The Omega 36M is a bit heavier than a typical dedicated pistol can, but it still ran with complete reliability.

The Omega 36M on the MP5 enhances control. Running the same subsonic ammo the MP5 really doesn’t sound much like a gun anymore. Particularly if maneuvering indoors or inside a vehicle the MP5 equipped with the Omega 36M is a force multiplier.

We ran the Omega 36M both long and short on the Primary Weapons MK116 MOD 2-M. This sound suppressor on such a rarefied black rifle lets you operate in confined spaces without destroying your ears. When fired over a distance the bullet produces a sonic crack no matter what you hang on the weapon. However, at close ranges or indoors the system makes an epic difference in both comfort and control. The combination of the Omega 36M and the MK116 MOD 2-M long-stroke operating system offers unprecedented close quarters performance.

When fed subsonic handloads the suppressed Remington 700 .308 is legit movie-grade quiet. This is the weapon system you could use to drop a pig or a whitetail without alerting his buddies grazing peacefully nearby. This thing is intoxicating.

None of this stuff is particularly cheap. However, the performance you get for your investment is truly world-class. Additionally, a single tax stamp will suppress the vast majority of my gun collection. If you only want one, the SilencerCo Omega 36M is your can.