by Edward Earle
in Gear, Knives, Lifestyle, People, Skills / How To, Weapons
0

When I was told this column would be dedicated to creating a self-defense EDC blade for executives (CEOs), I was extremely excited. I myself am an entrepreneur and CEO. But my life wasn’t always like this. I grew up in bad neighborhoods and had to learn to protect myself. Some days I made it home from school in time to evade a beating. Other times I didn’t. 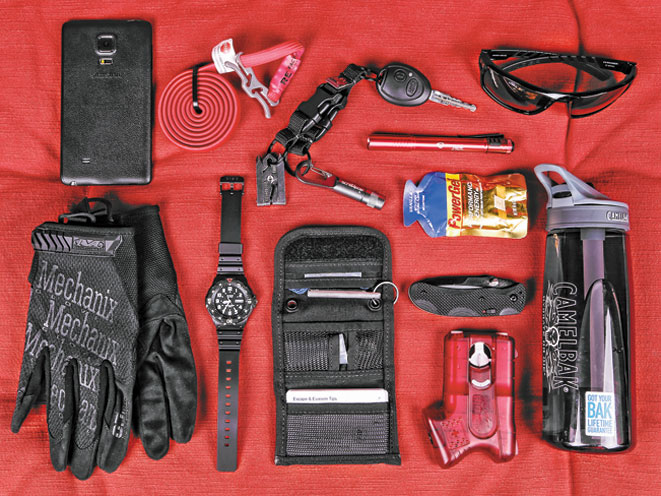 This upbringing is what drove me to start my own company and strive for the executive lifestyle in the first place. But I mention this to explain that I have a little bit of real-world experience when it comes to being on both sides of the tracks and how to defend yourself in both worlds. And defending yourself as a successful executive is much more difficult. There are so many variables to consider.

With this lifestyle, you can’t walk around with a chest rig or MOLLE-covered backpack. You can’t deck yourself in 5.11 gear for the “tacti-cool” look. You’re left to a nice shirt and slacks, fancy shoes and watches, etc. So you need tools and gear that fit into that type of lifestyle. This drove the design for this “Forge It” blade.

I started by listing some things attributes for a good edged weapon and then consulted some high-level CEO friends of mine to see what features they’d look for in a knife that they could carry every day and use to defend themselves if shit ever hit the proverbial fan. I also drew some inspiration from my good friend and associate John Hwang, who is the founder of Rainier Arms and a host of other companies. The quintessential entrepreneur, John is also a bigtime Second Amendment supporter and family man while working hard every single day. I wanted to create a blade that John would love—one he could wear everyday with his watch and Porsche keys.

The knife needed to be short enough to conceal with a suit or tuxedo but long enough to fit the hand and do serious damage. I wanted the blade to be distinct and elegant without drawing too much attention. Its profile and edge had to work for both reverse or saber grips. I needed it to be adaptable so it could slice, stab, trap, etc., while being carried in any position—on the belt, as a neck knife or in a boot. I ended up with a 2.5-inch blade.

The grip was designed to have really clean lines and allow the user to hold the knife loosely or firmly without losing much effectiveness. The apex ends up right in the middle of your four fingers, and the slight thumb ramp allows for more control. All together, the grip and blade needed to balance perfectly.

For this particular knife, I reached out to my good friend James Cheney, aka “Q.” He owns a brand called Tactical Trailer Park. “Q” is flat-out amazing. After learning, six years ago, that his newborn son had special needs he left his high-level engineering corporate job and moved his family back to his hometown in Idaho, where they could raise his son with the level of attention he needed. You can’t get much more admirable than that. This guy is a legitimate genius, but now he operates out of his small trailer home in an actual trailer park. Hence his company’s name.

“Q” builds some of the nicest custom edged weapons in the business, and he does it with tools that he’s personally built, usually out of repurposed things salvaged from dumpsters. It’s insane yet incredibly impressive.

For this knife, we decide to use Nitro-V super stainless. This is an AEB-L steel that has been modified with nitrogen and vanadium for seriously improved toughness. It’s just as tough as any carbon steel, but it’s totally stainless. It’s easy to grind and holds an edge well.

Bringing It To Life

The first thing we always do is CAD design the knife and then 3D print a plastic model so we can feel it, carry it, fight with it and make any changes we want before we start cutting and forging steel.

Then, using a cheap angle grinder, we cut out the rough shape. This is the hard way to do this, and you’ve got to be careful not to cut too far and ruin your blade profile. Then we smoothed out the rough profile using a belt sander. Then came beveling the edge and add the jimping on the thumb ramp. “Q” uses a homemade jig that works really well in keeping the bevel completely level and exact.

We needed to heat treat this baby at just over 1,900 degrees, because Nitro-V is a super stainless steel. We used a foil packet and put the blade inside the foil and then in the homemade oven. Fortunately, it didn’t take too long for it to be finished.

Instead of oil or water, we sandwiched the blade between two aluminum slabs and cooled it with an air hose. I had never tried this “air quenching” method before, but it worked fantastically.

I wanted the grip to have some substance, but we needed to keep the blade balanced, and that meant drilling some holes in the tang. Then, in true Tactical Trailer Park fashion, “Q” heated up the oven in his house and put the blade in for final tempering. The grayish finish was a little lovely mistake. We put a small piece of paper in the foil pouch in order to burn out any oxygen. After heat treating, we took the blade out of the pouch to find it was this beautiful tungsten gray color. It’s gorgeous, and the pictures don’t do it justice. Apparently air got through a hole in the foil, causing the steel to oxidize. But it looks so good that it’s now a permanent part of the process. You couldn’t create a Cerakote finish like the one we got on accident.

We used black linen Micarta for the handle scales. We cut them out and pre-fit them perfectly to the blade. Once we got them all smoothed out, we epoxied them onto the tang and pushed in the stainless steel pins. Then, after some cleaning with rubbing alcohol, we cleaned everything up with the belt sander.

We used a simple flat grind for the blade edge. After getting a good edge, we brought the knife over to a small belt grinder that “Q” had fashioned into an electric “stropping” machine. He uses a strap of leather on the small belt sander to polish the edge to razor sharpness. And as you can see by the pictures, this blade will shave the hair off your arm and cut organic material with ease.

In fact, based on the way that we hardened the blade, it passed our cardboard cutting test way better than any other blade we’ve ever used. Most blades can cut cardboard maybe 50 times—70 to 80 times at most—before they become dull. These are the best custom blades that cost $400 to $1,500. This CEO carry blade was able to make 297 cuts on cardboard before it couldn’t cut anymore. This kind of edge retention is incredible.

The last thing to make was the sheath, which we crafted from Kydex. The only distinction here is that the sheath works very much like a triggerguard for your handgun. The blade snaps into the sheath, and then the included paracord loops around your belt. You can put the blade anywhere you want on your belt. Just tuck it in. Then, when you draw the blade, the paracord keeps the sheath from following it. This makes this blade easy to EDC for self-defense without the need for a bulky contraption.

All I can say is that the pictures don’t do this thing justice. It is a beautiful, scary-sharp knife that is incredibly durable, easy to carry and as deadly as a blade can be. I’ve lived in this executive world for a long time now, and I will absolutely wear this blade on a daily basis because I trust that it’ll do what it was designed to do when called upon—to defend my life, the lives of those I employ and the lives of my family.

This article is from Ballistic magazine, Fall 2018 issue. Subscriptions are available at OutdoorGroupStore.com.