by Frank Melloni
in Guns, Rifles
0

With 2020 welcoming more new gun owners than ever before, we thought it would be a good idea to introduce two new offerings from revered rifle maker Savage. While also illustrating the point that a target rifle and a hunting rifle are two very different pieces of equipment. For this reason, we are pitting two Savage Model 110 rifles against each other, in hunting vs. target. 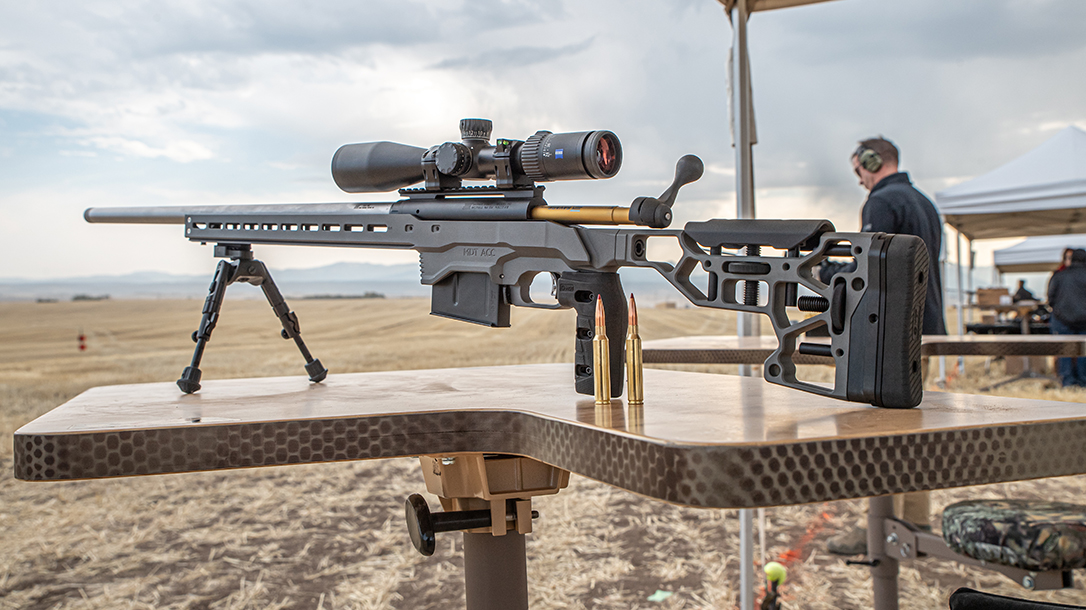 This notion resonates deeply with me, as I cover this information several times a year. I typically go over it within the first hour of the Basic Rifle Course at Renaissance Firearms Instruction. Truth be told, I was never properly informed on what designated one best for hunting and one best for target shooting. Until I put in a little research on the subject, I made a bad purchase or two.

After all, they both shoot bullets, so why can’t both be adequate target rifles? Actually, each one is built around one specific quality. For that reason, you will likely be dissatisfied if you buy one style rifle expecting it to perform the alternate task.

For purposes of illustrations, we decided to take a rifle from each end of the spectrum. Savage’s lightest hunting rifle, the 110 Ultralite, and its most precise target rifle, the 110 Elite Precision. Sure, they are both built with factory blueprinted actions, both use the AccuTrigger system and both are even adjustable for length of pull and comb height. However, this is where all similarities end. And, as they say, the devil is in the details.

Let’s begin by addressing and understanding the theme behind all hunting rifles, and that is saving weight at all costs. Now, most new gun buyers are under the impression that the overshadowing criterion for a big-game rifle is accuracy. That’s not true.

To humanely dispatch most big game, you only need a rifle that is capable of hitting within a 9-inch vital zone at 100 yards. To achieve this level of “accuracy,” you barely need rifling! Most hunting rifles are far more accurate than this by accident. So, they trade a bit of it off to enhance other important features, namely weight. Hunting rifles are shot in the field, where there aren’t any shooting benches and likely no real opportunity to successfully deploy a bipod.

With that said, they need to be easy to shoulder and fire in what might be a completely unsupported position. The Ultralite achieves this by using a thin stainless-steel barrel that is reinforced with carbon-fiber wrapping. This makes it light, yet rigid. A shorter barrel further reduces the weight. Even the magnum offerings, like our 28 Nosler test rifle, only employs a 24-inch barrel. Finishing off this most critical rifle component is a stainless-steel cap that protects the 5/8×24 threading to add a sound or flash suppressor or a muzzle brake. This brings us to the other trade-off, recoil.

Light guns have less opposing mass, which means far more kick transference to the shooter. For this reason, we topped our test rifle off with a Kahntrol Solutions Brake using the CWES (crush washer elimination system) to make things a little easier on our shoulders.

The barrel isn’t the only place where one can save weight; there is also the stock and action. The stock on the Ultralite is pretty straight forward—just everyday lightweight synthetic material. There’s no need to reinvent the wheel on this, as it is far lighter than traditional wood or modern alloys.

The action is very unique on the Ultralite, as every last ounce is saved through the spiral fluting on the bolt and the lightening cuts on the receiver. These small details add up to big weight savings; your back will thank you. Everything is fed from a detachable magazine that is flush fit and has a reduced capacity. This helps it meet DEC regulations for nearly any hunting season. Although, it’s slightly smaller magazine body certainly shaves off a few ounces as well.

We tested our Ultralite using Browning’s 160-grain Long Range Pro ammunition, which touts a Sierra Tipped MatchKing bullet. Accuracy was fantastic for a hunting rifle, with our average 100-yard groups hovering right around 1.5 inches. Not bad for the first round we grabbed off the shelf. That’s tight enough to put a confident shot on an elk out to 600 yards. And the 28 Nosler will certainly have the energy to drop it in its tracks.

For a 6-pound rifle, the accuracy wasn’t the only impressive thing. Unfortunately, the recoil was, too. After installing the Kahntrol Solutions brake it was far more effortless to send another box and a half downrange. However, without it…ouch.

The last downside of an elongated range session with a hunting rifle is barrel temperature instability. The thinner, lighter barrels tend to heat up rapidly, changing point of impact as your round count enters the teens. When hunting, this isn’t a realistic worry, because most hunters will testify that you are lucky to get one shot. Should you miss, that animal is not going to stand around waiting for a follow-up attempt on its life. Paper, on the other hand, has a death wish. It’ll just sit there all day long and absorb an ever-rising string of impacts.

So, if a lightweight rifle gets hot too fast, with too much recoil, the answer is to add some mass. The Savage Elite Precision epitomizes this concept and tips the scale at more than twice the weight of the Ultralite. Even in its lightest chamberings. All of this weight makes the gun far more comfortable to shoot and even more accurate. This is because much of it comes in the form of extra barrel length and girth.

For comparison, I put the Ultralite up against the 6.5 Creedmoor Elite precision to see how they fared against one another in accuracy and shootability. Although chambered in a much smaller cartridge, this Elite runs a barrel that is actually two inches longer than the 28 Nosler Ultralite and it is significantly heavier as it is 100 percent stainless steel. Together these qualities reduce barrel harmonics and make punching one-hole, sub-MOA groups just plain normal. As was the case with our 140-grain ELD MATCH Hornady ammunition.

Aside from a longer, heavier barrel, the Elite is held together by an MDT ACC Aluminum Chassis Stock. This creates a glove-like cradle and gives the shooter the ultimate in comfort and adjustability. The sturdy aluminum material far outweighs the lightweight synthetics used in guns like the Ultralite. This therefore reduces recoil, by giving the gun more mass.

The MDT stock accepts larger AICS-pattern magazines that hold more rounds than the traditional flush-fit magazines that are customary on hunting rifles. This adds a little more weight to the package and not only allows, but encourages, longer strings of fire. The same holds for the receiver that is entirely unrelieved. Because in this case, you want all the weight you can get.

Combined with a stock muzzle brake, recoil is all but eliminated. But this comes at a cost—and that cost is dear if you need to shoot this rifle offhand. At just over 12.5 pounds (before adding an optic), you are dead in the water if you are trying to hit anything offhand other than the broadside of a barn…from the inside.

Shooting the Elite Precision off of a bipod or a course obstacle is an absolute dream. The nitrided bolt provides inherent lubricity to ensure smoother cycling when you are on the clock. Also, the enlarged, ambidextrous magazine releases speed up reloads. This feature could be a thorn in your side on a rifle that you plan on lugging through the woods. Because a branch or a piece of kit could inadvertently send your feed-box to the forest floor.

These guns are built with higher capacity magazines and provisions for fast reloads because they are more comfortable in the long haul. They also don’t heat up as fast, causing that impact shift that comes with hunting rifles.

Before choosing your first rifle ask yourself exactly what it is that you want to do with it. Shooters that buy a rifle like the Ultralite expecting a quarter minute of angle accurately are going to feel like they’ve been cheated, because the value in this rifle comes in its ease of shooting unsupported and the comfort of carrying it over a long run of rough terrain.

Those who are considering the Elite Precision under the premise that all of that extra accuracy will make it easier to shoot in the standing position, are going to realize exactly how heavy a 12+ pound rifle is and what that means to your wobble area.

At the end of the day do some deep consideration of what the ultimate goal is for your shooting career. Remember to comfort yourself in the fact that gun safes can hold more than one rifle.

This article originally appeared in the Ballistic Magazine August/September 2021 issue. Subscription is available in print and digital editions at OutdoorGroupStore.com. Or call 1-800-284-5668, or email subscriptions@athlonmediagroup.com.