The Ruger Model 77 Hawkeye Hunter was a good companion in the Last Frontier, and loaded for bear in the hot, new 6.5 PRC. 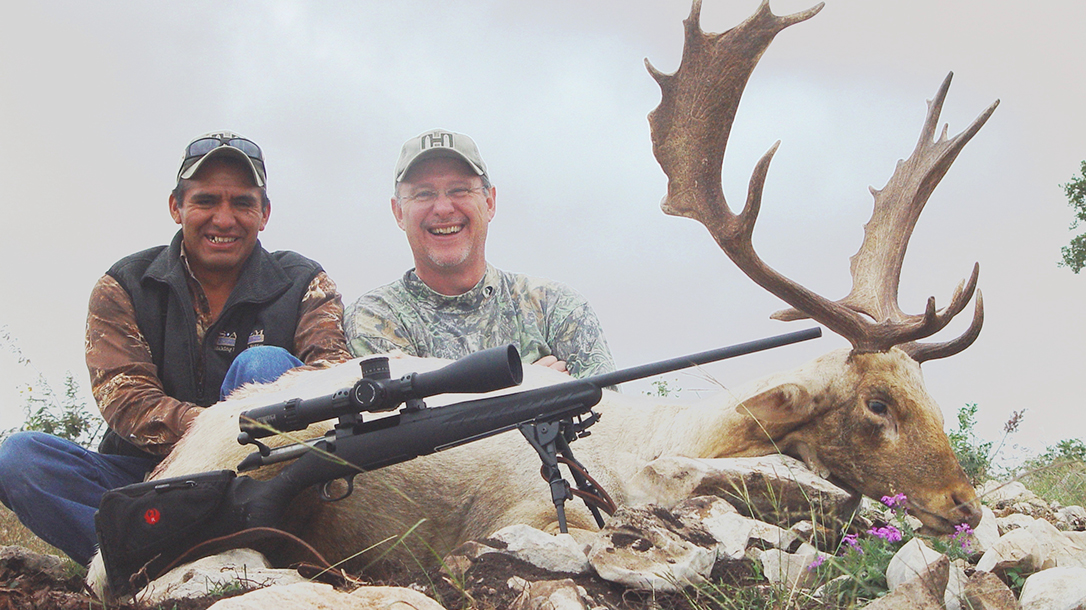 As dawn broke over Alaska’s Kachemak Bay, fellow writer Cork Graham and I motored across the mirror-smooth water on the first leg of our journey to a distant mountain-top blueberry patch. The early September berries typically attracted black bears like a magnet. The annual congregation of bruins is what drew us to hunt the area.

Setting Up Camp With the Ruger Model 77 Hawkeye Hunter

Boat anchored safely against the massive Alaskan tides, we donned our packs, slung our rifles and began the six-hour climb. Selecting Ruger’s new M77 Hawkeye Hunter in 6.5 PRC, I wanted a rifle that would reach out and kill cleanly. The trim rifle carried well as we put on the miles. The steep trail went from switchbacks in the fern-choked lower elevations through the spruce that gradually transitioned to alder thickets. Breaking out on top, we found the low-bush blueberries, but they were devoid of fruit from the atypical late-summer drought. No berries, no bears.

Instead of making camp at the peak as planned, we backed down about 400 feet in elevation to the first spruce trees. There we made a simple camp in what had been a black bear’s bed. Since temperatures were not going to drop below the 50s that night, all that was required was kicking a few twigs and spruce cones out of the way and rolling out a sleeping bag. I leaned the Ruger against a tree within close reach and fell asleep. At daybreak, we still-hunted back down the trail to the beach. We spent the rest of the day cruising that part of Kachemak Bay trying to find a beach-combing bruin.

The 6.5 Precision Rifle Cartridge (PRC) is raising some eyebrows in the shooting world. Based on the 300 Ruger Compact Magnum case, this beltless magnum has been billed as the “big brother” to the 6.5 Creedmoor. It’s also designed to cram its fat, stubby case into the confines of a medium-length bolt-action — the same action used for 6.5 Creedmoor and .308 Winchester rifles. The biggest difference is the 6.5 PRC’s bolt face, which harnesses the 0.532-inch cartridge rim. For those familiar with the .300 Win. Mag., you’ll recognize the PRC’s identical rim dimensions.

Handloading can safely push the same weight bullets to the 3,050 fps mark from a 24-inch barrel, according to Speer’s latest loading manual. The 6.5 Creedmoor shooting the same 140-grain bullet and barrel length is capable of 2,779 fps at the top end, and in an apples-to-apples comparison, the .260 Remington tops out at 2,731 fps. At the low end of performance for the same bullet and barrel length, the 6.5 Grendel has a maximum velocity of 2,338 fps, which granted, isn’t the ideal bullet weight for the Grendel.

By my estimation and velocity data, this puts the 6.5 PRC much closer to the .264 Win. Mag. in performance than its little brother, the 6.5 Creedmoor. The 6.5 PRC is nearly identical in performance to the 6.5 Remington Magnum released to the market back in 1965. This cartridge nearly died out owing to being chambered in Big Green’s then-new Model 600 and 660 carbines. At the top of the velocity heap, the 26 Nosler drives 140-grain bullets about 30 fps shy of the 3,300 mark. Meanwhile, the 6.5 Weatherby tops the list at about 3,350 fps.

How does the 6.5 PRC stack up against these previously mentioned .264-caliber cartridges? To find out, I borrowed a GA Precision from company owner George Gardner last summer. George is the mastermind behind the 6.5 PRC and collaborated with Hornady on the 6.5 PRC’s development. He’s also had quite a bit of success with the 6.5 SAUM over the past few years; that has a slight powder capacity edge on the non-wildcat 6.5 PRC.

After my initial introduction to shooting the 6.5 PRC GA Precision rifle, which is a $4,700 custom rig, I anxiously awaited for other manufacturers to join the game. When Ruger released their Hawkeye Long Range Target (LRT) rifle in 6.5 PRC, I was quick to make a call. This rifle didn’t disappoint. I shot sub-0.25-MOA five-shot groups at 10. Then a few weeks later was pounding steel targets at a mile at FTW Ranch.

When Ruger representatives shared with the few writers present that a trim, 22-inch barreled version was coming during the summer, I was excited to do more than fire a few rounds from the pre-production Hawkeye Hunter they had on hand. Ruger shipped one of the pre-production Hawkeye Hunters in 6.5 PRC back home to Tennessee. There I spent some time getting it ready for a September bear hunt.

The barrel is free-floated, cold hammer-forged stainless steel with 1:8 twist 5R rifling at minimum bore and groove dimensions, minimum headspace and centralized chamber. The Hawkeye’s non-rotating, controlled-round feed and extractor that harkens back to the 98 Mauser gives positive case extraction and feature a fixed blade-type ejector that positively ejects the empty cases as the bolt is moved fully to the rear.

To get maximum vertical adjustment from target optics, this rifle wears a 20-MOA Picatinny rail secured with four No. 8-40 screws. This rail rides over the traditional Ruger integral scope mounts machined directly into the solid-steel receiver.

A two-tone, laminated wood stock features an adjustable length of pull that ranges from 12.75 to 14.25 inches. A soft rubber buttpad helps mitigate recoil. Ruger painted the stock with a textured tan paint with black and brown “freckles.”

To strengthen the stock, it has two through-bolts, which are commonly found on magnum rifles. It is fed with AI-style magazines, and the bottom metal releases the magazine with a paddle-type release just in front of the triggerguard.

This rifle as tested comes standard with an LC6 single-stage trigger; it breaks cleanly at a hunter-friendly 3.25 pounds of pull. The three-position safety is easily accessible. It also allows the shooter to lock the bolt or to load and unload the rifle with the safety engaged.

Sling swivel studs ride fore and aft. It ships with one three-round AI-Style magazine, but an eight-round magazine is available from shopruger.com. During the hunt I learned that the three-round magazine, plus one in the chamber, was the most comfortable to carry for extended periods.

Touted as a long-range hunting rifle, it deserved a good piece of glass to squeeze the maximum from its potential. I mounted a Leupold 4.5-14X optic atop a Bushnell 20 MOA rail and snugged into a set of Bushnell rings. This setup allowed me to maximize the scope’s vertical elevation.

To get ready for hunting, I sighted in the scope with Hornady 143-grain ELD-X factory loads. However, I wasn’t satisfied with the results. Running the load across an Oehler 35P chronograph, it showed an average of 2,808 fps. This was significantly slower than the same load averaged in the 26-inch barreled Hawkeye Long Range Target model I tested last spring. In addition, this rifle didn’t like this load. The smallest five-shot group I was able to fire at 100 yards measured 1.410 inches.

This showing led me to search for a handload that would be accurate as well as yielding adequate terminal energy at the ranges I would be hunting. Virgin Hornady brass and Federal 210 primers were used in all load testing. I went up and down with bullet weights in my search. For starters, I tried 120-grain Hornady GMXs, 130- and 140-grain Berger VLD Hunting bullets, Hornady’s 129-grain SST, both of the new 6.5mm Hornady A-Tips in 135- and 153-grain weights, and last but not least was Hornady’s 143-grain ELD-X.

I tested all of these bullets with H1000 and produced excellent velocities and ho-hum accuracy. I was able to drive the 120-grain bullets faster than 3,200 fps, and even got the 153-grain bullets to fly at an average of 2,940 fps before showing excessive pressure signs.

I went through the process of testing H4350, H869, H8133 and Alliant Reloader 26, but nothing provided both speed and accuracy. RL26 had the best showing, but it wasn’t until I tried RL25 with the 143-grain ELD-Xs that everything started coming together. I had shot a ladder test where I loaded, shot and chronographed with RL26 from 55.0 grains to 59.2 grains in 0.2-grain increments with 143-grain pills seated to 2.955 OAL. This told me where the “nodes” or sweet spots were for potential loads. I found a node at about 3,000 fps that seemed to be consistent, but accuracy stayed just over 1 inch at 100 yards for five shots.

Swapping over to Reloader 25 proved beneficial. I went through the same exercise and found a load of 59.5 grains shrank groups to 0.75-MOA for five-shot groups, and averaged 2,965 fps. Zeroing 1.2 inches high at 100 yards gave me a 200-yard zero, and I subsequently moved to my long range and verified the ballistic calculations of the Ruger Kestrel ballistic calculator out to 600 yards.

We boated, hiked and drove countless miles over a week’s time. However, it only resulted in sighting a lone cow moose and her calf. Bear sign was scant, owing to unusually warm daytime temperatures in the 70s, and surprisingly it only rained one of the seven days of hunting. Hot and dry weather kept bears in thick cover and out of sight throughout my September Alaskan hunt with the Ruger Hawkeye Hunter.

The Ruger Model 77 Hawkeye Hunter was a welcome companion during the hunt, though. It proved itself on the range, and I’m sure would have performed well if called into duty. It’ll have to settle for Appalachian mountain whitetails back home in Tennessee this fall. Since my Alaskan black bear tag is still valid until next June, it may yet get its chance to bag a Last Frontier bruin and at least postpone a meal of “tag soup.” For even more info, please visit Ruger.com.