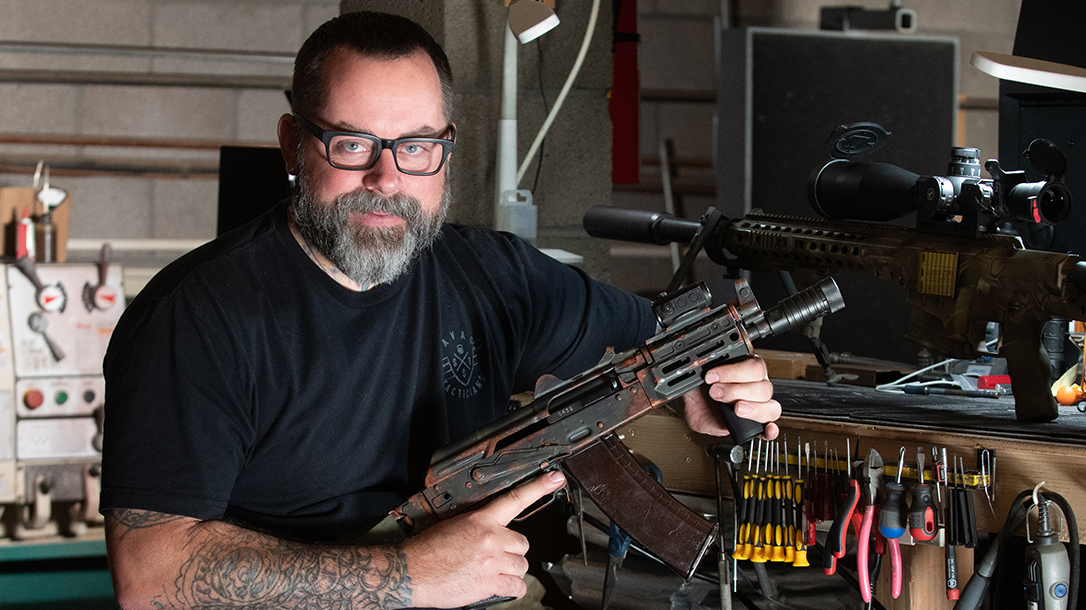 Firearms finishes have been an important part of the manufacturing process since their earliest development. The process of browning, or russeting, predates firearms. It’s a way of protecting iron and steel by causing the material to rust and then forcing that process to stop. The end result reduces glare and also helps prevent the metal from rusting in the future. This method gave way to hot and cold bluing, and then Parkerizing. Today there are dozens of different types of finishes, all yielding different results and capabilities. One of the most common finishes in use today by professional manufacturers and gunsmiths, as well as the “do-it-yourself” crowd is Cerakote. Few in this industry are doing it to the level of Scott Richardson, owner of Ronin Arms in Payson, Ariz. 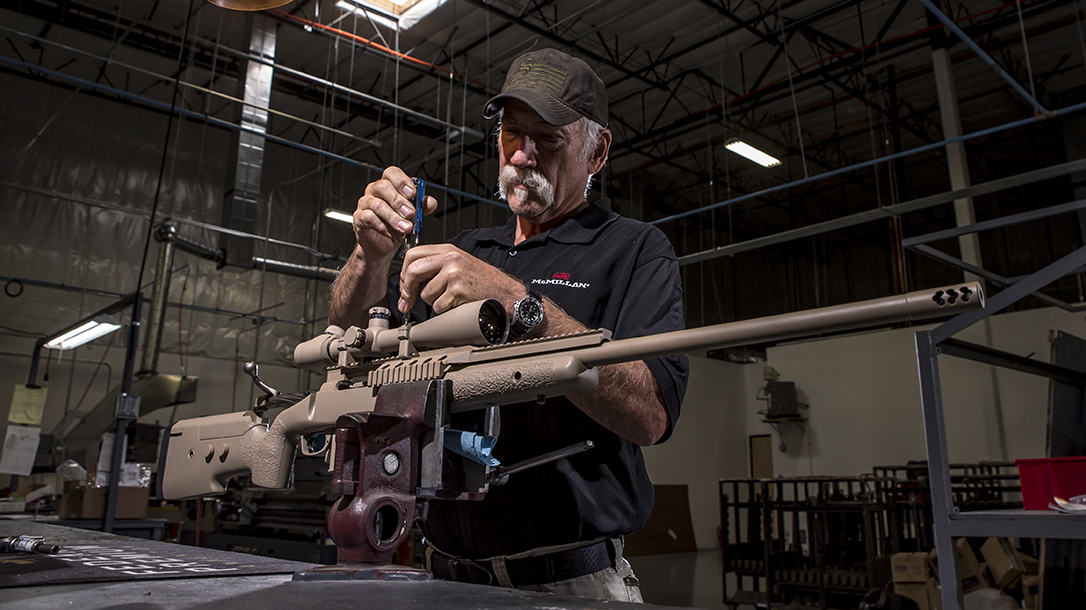 The Beginning of Ronin Arms

Richardson started his creative life as an airbrush artist in high school. There he made a name for himself in the Albuquerque, N.M., area by doing commissioned drawings for tattoo artists before he was old enough to drive. Upon graduating from high school, one of the local tattoo artists took Richardson under his wing as an apprentice; that began a 21-year career in the tattoo industry.

This is an important foundation. As Richardson points out, “There is not a lot of room for mistakes as a tattoo artist … I had to become good at not only drawing the artwork, but planning out how I would execute it and remain adaptable through the process. It also taught me a lot about colors, and how they react and look when put onto a medium that is not a white background.”

A love of firearms instilled by his grandfather, and a restlessness that comes from doing something over and over again, eventually led him to start branching out. He found new ways to challenge himself and fulfill a creative part of his soul that was unsatisfied. Having left New Mexico almost two decades earlier, a firearms finisher in Arizona asked for his help in airbrushing some artwork on a firearm.

Richardson immediately felt comfortable with the airbrush aspects, as well as the creative vacancy within the industry that he wanted to fill. At that moment, he formed Ronin Arms.

Established as a federally licensed firearms manufacturer and Class II SOT holder, Richardson threw himself into the world of finishing with a passion and dedication that few could mirror. His technique for spraying and his ability to create with an airbrush and do things by hand that others considered impossible was already well established and documented. What Richardson really desired was a deeper understanding of this new medium called Cerakote.

He began to study how it was made. He also looks at how it adhered to different materials and what its strengths and weaknesses were. More than just studying the new materials though, Richardson began to look at actual camouflage patterns made out of textiles. He studied how they flow, how they are layered in the manufacturing process and how to recreate that on a machined surface made out of metal or polymer.

Cerakote itself is a very innovative material and has opened up some amazing possibilities within the firearms community. Located in White City, Ore., Cerakote started in 1984. It focused on “developing and manufacturing the highest performing line of ceramic coatings available.”

Since its inception, Cerakote has added more than 140 different colors to its catalog. Its focus is primarily on the firearms industry, but it also found its way into the kitchen and bath, automotive, bicycle and fishing worlds as well.

Cerakote currently offers its coatings in a few different series. The new Elite series offers the highest corrosion and chemical resistance while being applied with one of the thinnest coatings. This series comes in a few different Earth tones as well as black and some industrial finishes. This is perfect for internal parts. More importantly, it’s good for anything where the thickness of the coating and its ability to endure friction and wear are most important.

The second series, and probably the most common, is the H series; this is a heat-cured ceramic finish that comes in nearly 150 different colors. It provides moderate corrosion resistance. It also provides a huge palette with which to make almost any color imaginable. In case you weren’t aware, the colors themselves can be mixed and blended to create custom colors.

The C series is an air-cure ceramic that has a heat resistance to approximately 1,200 degrees Fahrenheit. This finish is perfect for barrels, suppressors and any other part that requires a high heat capability. It’s also good for products like optics and such that you would rather not bake as part of the heat curing process.

The final series is an NiR series. It’s available for military and law enforcement and features a proprietary coating that reduces the firearm’s Infrared signature. Between these different compositions and all of the color offerings, there is very little that cannot be done with Cerakote.

Keeping It Real at Ronin Arms

One of the areas in which Richardson excels is creating realistic textures and visual effects with his Cerakote applications. His shop is well stocked with all of the modern equipment needed for every possible process.

His custom-built walk-in oven will handle objects up to 7 feet long, effortlessly handling even the largest .50-caliber rifle. He uses a fiber laser to mark and remove material while also being able to use the laser at different frequencies to change the color of the pigment within the Cerakote itself. Richardson also has 3D printers on site. He uses them to create holding jigs and fixtures for custom work. Meanwhile, a vinyl cutter is there to create standard camo patterns and make your finished product exactly how you want it.

Where Richardson really shines, though, is in all of the areas where that technology isn’t viable or applicable. It’s in this realm that experience, a trained eye and a steady hand prevail.

This brings us to a more recent AK creation. The client wanted his new gun to have the appearance of a gun that had been left behind on a battlefield.

For this project, Richardson studied rust and how it forms. He also looked at hundreds of photographs to see how and where rust would form on a firearm. He even looked at what colors it took on and how it felt. Most people associate Cerakote with a smooth finish, so trying to create a tactile, multilayered result is not as easy as one would think.

For this project, Richardson hand applied five different colors to create the rust: Two reds, two oranges and one yellow. In some cases, he built the color up on top of the surface using a layering effect and multiple different tools to create a textured feeling above the surface of the gun. In other places, he hand painted the rust on prior to the black top coat; this is so he could erode away at it and expose the rust below the surface.

Much like an authentic rusting firearm, some of the rust is a corrosive rust and some is from material buildup; this gives the gun not only the visual appeal the client was looking for, but the tactile feel as well. Hand applying the rust took more than four hours on top of everything else that went into this gun. But the result is stunningly realistic.

The airbrush artist in Richardson never stops and he is always looking to try new things. Most Cerakote artists use a vinyl cutter and digital software to create camouflage patterns, but not Richardson. He chooses to hand cut many of his stencils so that they are unique and organic.

One area where we see some of the creative work is on a .22 rifle that he made for his daughter. Hand cut unicorn stencils overlaid and blended with various forms of pink and purple create a colorful gun that any Princess would be proud to own.

Ronin Arms currently does some finish work for quite a few big-name companies in the industry. In addition to working on firearms, Richardson also has done finish work for knife manufacturers. He’s even worked with jewelry companies where he sprays clear coat layers on top of precious metals to prevent oxidation over time.

When asked about his aspirations for the future, Richardson replied, “I want to continue to challenge myself as much as possible every day. I enjoy working on projects that seem impossible and discovering new ways to complete them while learning more about the process along the way.”

For even more info, check out RoninArmsAZ.com.

This article is from the Feb/March 2021 issue of Ballistic Magazine. Grab digital and print subscriptions at OutdoorGroupStore.com. 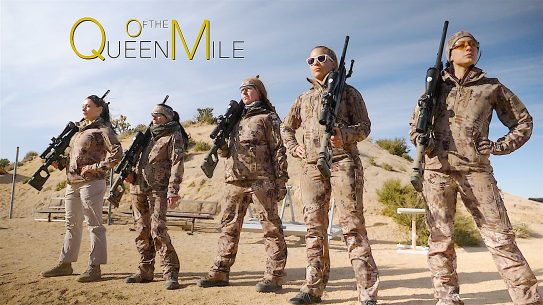 'Queen of the Mile' is a new documentary that puts five new female precision...