0
SHARES
177
VIEWS
Share on FacebookShare on Twitter
Rock River Arms announced its BT9 9mm series all the way back in April 2019. The first two AR pistol models in the series featured 7- and 10.5-inch barrels. There was also a BT9 R9 Competition Rifle. They all accept Glock mags. Fast forward one year and Rock River just added a new AR pistol with a 4.5-inch barrel to the series. 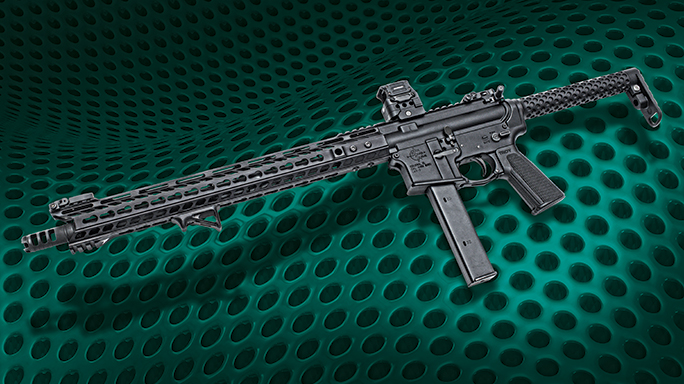 Outside of the 4.5-inch barrel, there are obviously a lot of similarities between the new variant and the first two AR pistols in the series. Firstly, like the other BT9s, the new 4.5-inch variant accepts Glock-style magazines. Rock River based the 4.5-inch variant on its billet aluminum lower receiver with a Glock magazine-compatible flared mag well. Also, like the other two, the 4.5-inch BT9 Pistol features the popular SBA3 Arm Brace from SB Tactical. It features a 5-position LOP adjustment.

Now, onto the differences. One difference that stands out is the muzzle device. While the new variant features a chrome moly, 1:10 twist barrel like the others, Rock River opted for a Smith Vortex flash suppressor (1/2-36 threads) to top it off. For reference, the 7- and 10.5-inch variants features an A2 Flash Hider. Another difference, as expected, is overall length. The 7- and 10.5-inch variants feature an extended length of 26 and 29.5 inches, respectively. Do the math on the differences in barrel length and the new 4.5-inch variant has an extended length of just 23.5 inches; that’s nice and compact, just the way we like ’em.