On a Monday afternoon, a family was sitting in their minivan in downtown San Francisco. Then a loud crash ruined their day. A masked criminal had smashed one of the rear windows of the car in order to steal a bag containing a laptop, passport, children’s birth certificates and headphones. The strap of the bag was wrapped around a car seat headrest and the driver, a mother and her two young children, ages 2 and 4, who were sitting in the minivan’s third row, helplessly watched as the criminally brazenly stole the bag. The mother said, “I didn’t really have time to react….it was a five-second deal.”

These types of brazen crimes have become common place in most American cities. The extreme rising violent crime has made San Francisco and many other cities “no go” zones for many Americans.

At least 12 major U.S. cities have broken annual homicide records in 2021. Violent crime rates in the United States have pushed it into the same world crime tier as Kazakhstan, Argentina, Angola, and the Sudan.

Why is this happening? Many so-called experts and political leaders claim they don’t understand or can’t explain why the violent crime rate remains so high. Some try to blame too many guns on the streets. That excuse is myopic since studies have proven that the majority of guns used in crimes were by people who illegally possess them. Researchers at the University of Pittsburgh teamed up with the Pittsburgh Police Department in 2016 to look at almost 900 firearms recovered from crime scenes in 2008. They found the criminals connected to these firearms did not legally possess them in 80 percent of the cases.

In reality, its crime-emboldening policies enacted by jurisdictions across the nation that have allowed this rise in violent crime to occur. So-called bail reform that eliminates bail for most criminals, including those using guns in crimes, not prosecuting certain crimes, including some gun offenses, decriminalizing certain drugs, defunding or reducing the size and scope of police departments, and continuing to use the pandemic as an excuse to not incarcerate violent people, has created an environment where many jurisdictions have a revolving door criminal justice system that sacrifices the public’s safety for the criminals’ “rights.”

What these policies have also done is severely hamper the profession of law enforcement, forcing many officers to reevaluate their profession, spurning a historic rise in resignations and retirements and creating recruitment challenges for departments across the nation. For those officers left, policing for them has become much more reactive than proactive due in part to pressure from their local communities. A lack of reactive policing allows criminal activity to develop and occur. It prevents crime discovery and interdiction before occurring.

The results, in San Francisco, its police department has reported a 179-percent increase in thefts from vehicles downtown and an 85-percent increase citywide. Larceny thefts, the smash-and-grab incidents like the one the family in the minivan experienced, are up 53 percent and common robberies, up just over 12 percent.

The brazen smash-and-grab crimes prove especially violent and egregious. A 2020 survey of 61 retailers from the National Retail Federation showed organized retail theft jumped nearly 60 percent from 2015 and cost stores an average of $719,548 per $1 billion dollars in sales, promoting many to close stores and reduce business hours.

Cities large and small are being overrun by these brazen types of crimes, many of which occur during “normal” business hours with the public around, increasing the danger and severity of these crimes. These crimes, plus an increase in homicide rates around the nation, have pushed some jurisdictions to ask the federal government for help.

Ironically, many of these same cities enacted crime-emboldening policies. They famously sought to defund the police. Now they ask for federal help to combat their rising violent crime.

In reality, the only way to fight this rise in violent crime is to reenact proven criminal justice strategies that allow criminals to be arrested, prosecuted, and kept in jail. This starts by allowing law enforcement to use proven, successful, evidence-based, proactive policing strategies. Now elected leaders must reaffirm the role of law enforcement in their communities. They must support the profession, letting everyone know that law enforcement’s job comprises protecting the public, not persecuting regular people. 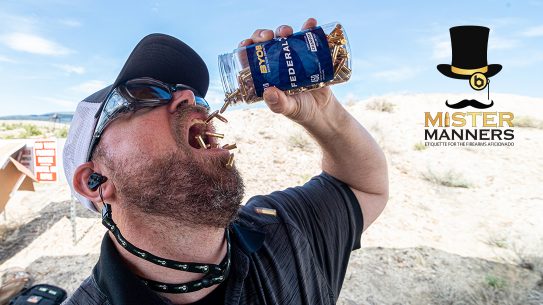 Mister Manners: How to Handle the Ammo-Hungry Gun Mooch

With the ammo crisis still upon us, gun owners need to set boundaries when...