by Mike Detty
in Guns, Rifles
0

The AR-15 is a great platform. It’s light and mobile and can be fired quickly and accurately. It just doesn’t have much of a punch. But what if you could take the best attributes of the AR-15 and chamber it in .308? Wouldn’t that be revolutionary?”

I was sitting in Frank DeSomma’s Phoenix, Ariz., office. The president and founder of Patriot Ordnance Factory, or POF-USA, DeSomma had invited me to see his new rifle—the Revolution, a lightweight AR in .308 Winchester.

Innovation comes naturally to DeSomma, who spent most of his adult life in the aerospace industry. Nearly every part he designed and manufactured was made from a lightweight alloy with some kind of coating to reduce friction, dissipate heat and prevent corrosion. In the firearms industry, innovation is stymied by tradition and herds of me-too engineers who do things the way they have always been done. DeSomma was unhindered by these constraints, however, and applied his extensive knowledge to create new paths, leaving others in his dust.

The beginnings were inauspicious. “I went shooting with some friends,” DeSomma said. “I had a FAL, and they had ARs, and I saw how much time they spent maintaining them. In two days, I had designed a piston system for the AR, and in two weeks I had machined the parts, and in six weeks I had a working prototype.” 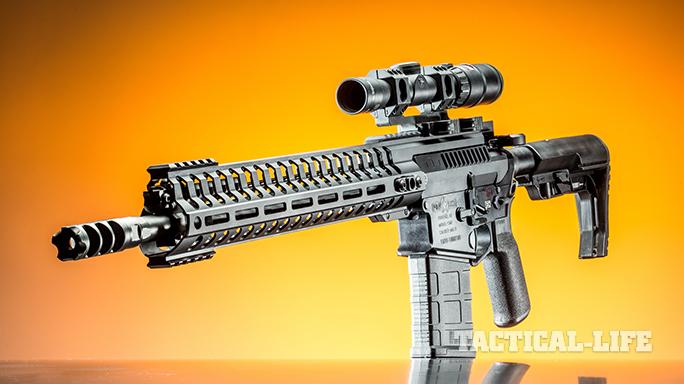 “The Revolution is not a small-frame .308,” DeSomma said, pointing to a collection of parts on his office table. “It’s smaller. The distance between the rear takedown pinhole and the front hinge pin is exactly the same as on a 5.56mm rifle.”

To demonstrate, DeSomma picked up a 5.56mm upper receiver and locked it onto a Revolution lower. The Revolution uses many 5.56mm parts, such as the buffer, handguard, charging handle, bolt carrier, barrel nut and POF-USA’s gas piston operating system. “It truly is an AR-15 that shoots .308 rounds,” DeSomma said.

Weighing just more than 7 pounds, the POF Revolution has all of the handling characteristics of an AR-15. The only giveaway of this rifle’s caliber is the pregnant-looking magazine well.

“We use our same heat-sink barrel nut that we use on the 5.56mm on this gun,” DeSomma said. “We even use the same 5.56mm barrel extension, though the geometry is a little different. But we found a way to stuff a fat .308 cartridge into the barrel extension without changing its external dimensions.” It even uses the same bolt carrier dimensions, though the firing pin is longer to make up for the difference between 5.56mm and .308 rounds.

Even the POF Revolution’s 14.5-inch M-LOK handguard is the same as used on POF-USA’s 5.56mm rifles. Made from an extrusion, the part requires 28 minutes of CNC-machining time. It is an extremely rigid platform with a tail piece that attaches to the top of the receiver. DeSomma’s design incorporates steel inserts in the top of the upper receiver to attach the tail piece and eliminate any chance of stripping threads.

Beyond fitting a .308 into an AR-15 chassis, the POF Revolution incorporates several other innovations. DeSomma’s roller-cam pin design eliminates scoring inside the upper receiver and takes all of the stress out of the unlocking sequence. It’s a simple fix, which makes a great deal of sense. So too does the E2 dual extraction system, which cuts four shallow grooves into the neck area of the chamber. When the cartridge is fired, gas vents down these grooves and pushes against the shell’s shoulder, breaking the seal. Designed to enhance extraction, the E2 system reduces wear on the extractor and increases its service life.

Sustained heat is a threat to any weapon system, and DeSomma has an answer for that, too. His heat-sink barrel nut is made from aluminum and features radiating fins. It has more than three times as much surface area as the mil-spec barrel nut, and DeSomma claims it is 18 times more effective at dissipating heat.

A standard buffer is used on the POF Revolution. The receiver extension, or buffer tube, is actually an intermediate design between POF-USA’s seven-position .308 tube and six-position 5.56mm tube. The part features POF-USA’s anti-tilt Carrier Cradle extensions, which ensure the bolt carrier is always supported even when it is in its battery position. Its outer diameter is the same as the 5.56mm’s, so it is compatible with most mil-spec furniture. A Mission First Tactical (MFT) buttstock and pistol grip are used on the Revolution.

Finally, we come to the POF Revolution’s billet-crafted Gen4 lower receiver, which features fully ambidextrous controls, including the bolt release, safety selector and magazine release. It also has an oversized, integral triggerguard and receiver tensioning screws to eliminate play between the upper and lower receivers. The lower is also fitted with POF-USA’s excellent drop-in single-stage trigger. Machined from tough A2 steel, the parts are nitride heat-treated to ensure hardness, corrosion resistance and a consistent pull. With a pull weight of 4.5 pounds, the trigger is almost perfect for just about any mission, whether it’s competition, hunting or home defense. 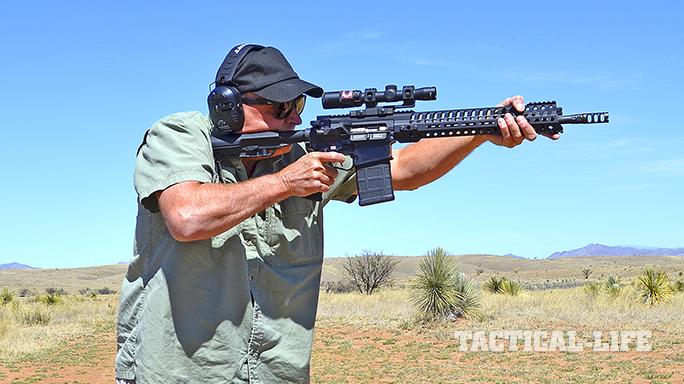 The only downside I’ve found to living in Tucson, Arizona, is the wind. My first outing with the Revolution was miserable. Winds gusted to 15 to 20 mph, and my target rocked back and forth in my target stand. There were a couple of times when the target was blown over and another time when the wind ripped the staples from the upright and blew my target into Mexico. So it wasn’t the best day to test a gun’s accuracy.

Despite that, I shot several groups that were OK—between 1.5 and 2 inches at 100 yards. After firing about 50 rounds, I concluded that all I was doing was wasting some quality ammunition. I packed my gear and headed home, and spent some time on the computer checking the weather. I found that the next day, winds were predicted to be from 5 to 7 mph in the morning. After that, they’d pick up again.

At 7 a.m. the next day, I was at my secluded shooting location southeast of Tucson, and winds were already at about 8 mph. I set up my DOA Tactical shooting bench and Caldwell rifle rest as well as my target stand, shimming the wooden uprights so it couldn’t rock. I loaded the Revolution and sat it in the rifle rest and noticed that the magazine made contact with my bench top. Inconsistent contact could have an adverse effect on the point of impact and destroy groups. I adjusted the rifle rest to make sure there would be no incidental contact.

With a Trijicon 5-20x50mm AccuPoint mounted on the Revolution, I fired my first group with Hornady’s 155-grain American Gunner BTHP ammunition. One of the great things about the Revolution is its recoil—it’s so mild that you can watch your bullet strikes. Normally, I use a PAST Recoil Shield to protect my arthritic shoulder when shooting .308s, but honestly, the Revolution’s recoil didn’t seem any different than that of a 5.56mm. My first group for record measured just 0.75 inches, and I watched every round hit the 2-inch Shoot-N-C target.

The winds started to pick up not long afterward, and I tried to time my shots between gusts. Before long, I had fired sub-MOA groups with four of the five loads I’d brought. The last ammunition I shot for record was Federal’s 175-grain Gold Medal Match ammo. My first two shots were touching, and I concentrated hard on the AccuPoint’s aiming dot, doing my best to center it on the center of the Shoot-N-C target as I added pressure to the trigger. By the time I finished, the Revolution had placed five shots into a group that measured just 0.48 inches.

I removed the Trijicon 5-20x50mm AccuPoint and replaced it with a smaller 1-4x24mm AccuPoint. After a quick sighting group, I set up my MGM BC-C Zone steel target at 20 yards. With 10 rounds of 155-grain Hornady ammo in the magazine, I rocked the target with every round in less than two seconds. My splits, or time between shots, averaged just 0.2 seconds. I never lost the Trijicon scope’s glowing aiming point from start to finish and fired as fast as I could pull the trigger. POF-USA’s three-port compensator, with its 15-degree port angles, was extremely effective in keeping the Revolution on target.

Empties were ejected at 3 o’ clock about 7 feet away. The Revolution uses POF-USA’s five-position-adjustable gas system, which is comprised of just three parts: the gas plug, piston and operating rod. It is a simple and robust system that is easily adjusted to suit any load or suppressor you might use. During the several hundred rounds of testing, there were no failures.

To put things in perspective, the POF Revolution provides the accuracy of a heavy-barreled bolt gun in a lightweight and easy-to-handle package without the sharp recoil. Its precision and ease of maintenance are remarkable, and I don’t know why anyone would buy a heavier, harder-kicking and less-accurate .308 when the POF Revolution is the perfect solution to just about any tactical, competition, hunting or home-defense need.