My initial interest in firearms was spurred by hunting with bolt-action rifles, and my 15-year-old son’s blossoming obsession for hunting has allowed me to revisit my own youthful memories. When the opportunity arose to be one of the first to field-test the 6.5 Creedmoor Remington 700 CP (Chassis Pistol) with a factory-installed brace via a Texas hunt, there was no hesitation—especially when my son Ethan was encouraged to attend as well. 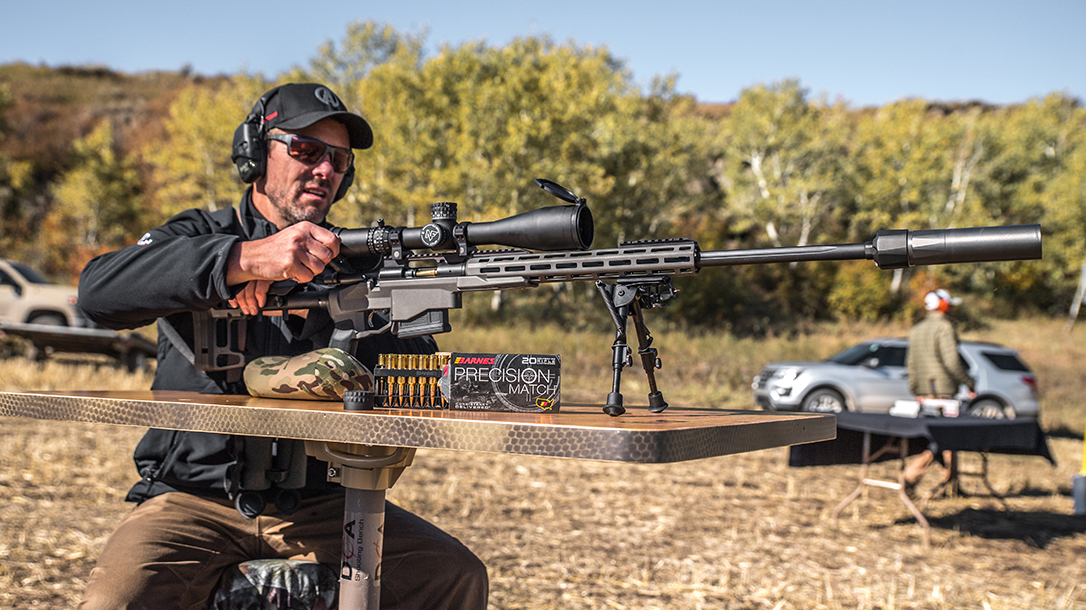 The Remington 700 CP and Some Game-Changing Potential

For me, at least, the braced Remington 700 CP gave me an immediate “aha!” moment. The 700 CP braced pistol heralds how “braced pistols” could potentially turn the hunting-weapon genre on its ear. The SB Tactical adjustable brace fitted to the 700 CP maximizes the capability offered by the Remington 700 CP pistol in the same way it does when installed on an AR or AK.

What struck home to me almost immediately were the benefits of a 12-inch barreled bolt-action pistol when taken afield. An AAC Jaeger 30 suppressor direct-threaded onto the muzzle only sweetened the deal. Here was a compact, suppressed platform that would prove deadly effective in most hunting scenarios. What’s not to like with a hunting weapon that can be wielded in tight spaces (think hunting blind) that is also socially polite when fired thanks to the AAC Jaeger suppressor?

The Remington 700 CP is a reflection of our times with its chassis, M-LOK forend, detachable 10-round AICS-style magazine, pistol grip, Picatinny rail, threaded barrel and brace. The 12.5-inch barrel gives an overall length of 21.75 inches before adding the brace or threading the suppressor, which brings the length to 43 inches. Even with the brace and suppressor mounted, the overall length remains shorter than your typical 24-inch bolt-action rifle. It weighs approximately 7.5 pounds when fully kitted out. A Zeiss Conquest V4 4-16x44mm scope with ZBR-1 reticle anchored with Talley rings proved a great addition atop the Picatinny rail.

The Wildlife Systems’ S Ranch located 40 minutes out of San Angelo, Texas, proved ideal for a father-son hunting experience as well as for exploring what the Remington 700 CP had to offer. The weather was surprisingly brisk for our late-October hunt; I was colder in Texas than I was in Wyoming the week before while chasing antelope. We were glad we didn’t confine ourselves to carry-on-only airline travel with the extra layers of clothes we very much appreciated in the mornings and evenings.

Hunting on the S Ranch was a blend of safari-style and stand hunting. Whitetail deer were the main focus, with hogs and coyotes also targets of opportunity. While Remington had various rifle models on hand, such as the Model 7 and Marlin 1895 Dark Series lever action, I was told that the suppressed 700 CP braced pistol with the Jaeger suppressor was specifically for my use and evaluation.

Ethan and I could have hunted separately. He’s more than qualified with several nice Virginia and West Virginia bucks to his credit since he started hunting with me at 8 years old. In fact, I stopped carrying a rifle with me during our hunts and now act more as a guide and pack mule. So, I left the choice to Ethan, who decided that more would be gained from joint excursions, and I was glad he chose this route. Of course, he got first dibs with the Remington 700 CP.

Camp and the Remington 700 CP

Upon our arrival in camp, we quickly made our way to the shooting range to verify zero as darkness was setting in. The guides were impressed when Ethan plopped down on the bench first without hesitation. The young man loves to shoot and has been doing it for most of his life. It was only natural for him to assume that he’d be the one to confirm zero. Remington 120-grain HTP (High Terminal Performance) Copper 6.5 Creedmoor tipped with Barnes TSX BTs was the supplied ammunition. An efficient 1.25-inch three-round group at 100 yards showed the need for a slight scope adjustment. The attached suppressor shifted point of aim from the factory zero, but that is to be expected.

Numerous qualities of the 700 CP were immediately appreciated on our first morning at the S Ranch. I’ve always been a fan of detachable magazines for safely and efficiently loading and unloading a bolt-action rifle. Every instance of moving in or out of a mode of transportation and in or out of a blind, which happens multiple times a day, requires weapon manipulation.

The tight nature of the hunting stands is where the 700 CP came into its own. The ability to wield a suppressed 6.5 Creedmoor in a package shorter than most standard bolt actions was invaluable. The S Ranch had blinds situated with expected shots in the 100- to 125-yard range.

It was quickly evident that finding deer was not the issue at the S Ranch. Analyzing and choosing a nice buck out of the multiple candidates was the real chore. Tough problem to have, I know. Ethan had no trouble exercising patience as prospective bucks kept arriving in and leaving our area. All would have qualified for an immediate shot back east. But this all changed around 10 a.m. as our young guide became instantly agitated when a heavy-mass eight-point buck stuck his head out of the scrub oak. Our guide relayed in whispers how the eight-point was well above average for the area, and there was no debating the point when he was observed next to his peers.

Excitement ran high in the tight confines of the blind for the next 20 to 30 minutes as we watched the chosen buck slip in and out of sight or as other deer passed in front or behind him, preventing a shot. Conversation was made in hisses as Ethan steadied himself behind the Remington 700 CP, peering through the Zeiss Conquest optic with the guide and me never taking our eyes from our binoculars.

Finally, the buck presented an opportunity for a clean shot. The guide barely got the words “Take him” off his lips when the AAC Jaeger suppressor coughed with a round headed downrange. The all-knowing thwack of a 120-grain bullet striking flesh was clearly audible. The eight-point collapsed in his tracks with unchewed food still in his mouth.

The blind erupted with backslapping and congratulations while the guide and I kept our eyes downrange on the crumpled buck. Ethan shucked a fresh round into the 700 CP, but there was no need, as the deed was complete. Smiles, fist bumps and hugs only experienced by fathers and sons commenced.

The cliché of being proud of him comes closest to explaining the feelings that coursed through my head and heart. Ethan was patient and executed a perfect shot on a great animal. Seasoned adult hunters couldn’t have performed better, let alone a 15-year-old, no matter how many deer they’d previously taken.

A round of photos followed by field dressing had us returning to camp with Ethan’s buck to hang it up and begin processing it. The looks on the other guides’ faces confirmed that we’d done well. Hasty measurement of the eight-point’s rack generated a rough score of 138. This would stand as the best buck taken for our camp out of six hunters, including my own eventual 11-point.

The next couple days saw me passing over several nice deer in my quest to surpass Ethan’s. It never happened. My 11-point did come with a nice story that further illustrates the benefits of the Remington 700 CP braced pistol with the Jaeger suppressor threaded on.

After much razzing about my pickiness, I made the decision to take a nice 11-point. It featured a unique drop tine off his main beam. Getting a wild animal to cooperate with a broadside shot isn’t as simple as it sounds. This was complicated even more when five wild hogs made a sudden appearance, scattering the deer. My 11-point buck was about to take off when a shot presented itself. The Barnes 120-grain HTP bullet slipped right behind his shoulder with a double lungshot.

After racking the bolt, Ethan whispered to me that a hog remained out in the open probably wondering what just caused that deer to nosedive into the turf 30 yards to his left. The suppressor had effectively mitigated the normal muzzle blast. The compact Rem 700 CP swung around as Ethan whispered, “Pop that pig!” in my ear. I quickly obliged. The deer and the hog ended up about 10 yards from each other; it gave me a nice story to tell even if my deer came up short in the measurement department.

Memories To Last A Lifetime

The Remington 700 CP braced pistol with AAC Jaeger suppressor combo proved effectual not only at stand hunting, but also in spot-and-stalk forays. Ethan went on to take a hog of his own along with a couple of does upon the request of camp members wanting to take delicious venison home. We used mobile safari-style tactics to cover as much terrain as possible. The 6.5 Creedmoor cartridge combined with the ergonomic Rem 700 CP proved potent in that scenario.

Hunting is a passion of mine. Firearms, particularly rifles, are another joy. My youngest son has inherited both of these loves. As such, Ethan and I will always remember our time in Texas. Even as life tests us and we do not always see eye to eye, we will have this shared time together to anchor us. Ethan said it best when we were waiting to board the plane in San Angelo to take us back to the real world: “Can’t we just stay in Texas?”

I was certainly amenable to the idea, but I knew better than to entertain the hope. He smiled and said to me, “Thank you for an awesome time.” And that’s what it’s all about.