The gun world is replete with interesting and desirable weapons. From antique muskets to modern-day submachine guns, our individual wish lists are long. There is one gun, however, that is pretty much on any serious shooter’s dream list: The M134 Minigun. From its appearance in thrilling movies like The Matrix and Act of Valor to its use in the military, the M134 has become an iconic weapon. The sound of a Minigun firing with its sustained b’rrrrraaapppp is very distinct and guaranteed to catch the attention of anyone nearby. 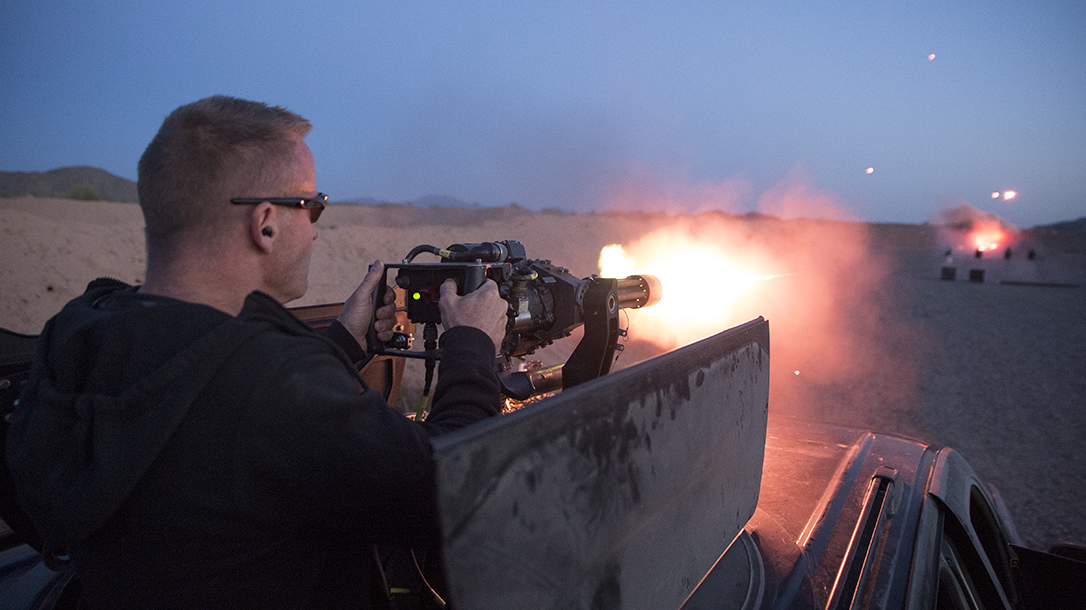 The modern Minigun can trace its DNA all the way back to the 1860s when Richard Gatling replaced the hand crank mechanism on his famous gatling gun with an electric motor. This was a new invention at the time and gave the Gatling gun a fire rate of close to 3,000 rounds per minute.

Ironically, the design never took hold in military circles, and the gun was mostly relegated to history books. In the 1960s, the U.S. military waded into Vietnam. There it started taking a look at electric motor-driven guns like the Gatling. General Electric took on the task and scaled down the M61 Vulcan cannon, which fired a 20mm round. They chambered the new gun in 7.62 NATO, and the M134 was born.

Fast forward to today, and the M134 has seen some serious evolution. Enter the Minigun Jedi at Profense. The president of Profense, Michael Iacobucci, shared with me that the company has its origins in the aircraft industry. They moved toward weapon design and manufacturing after a client requested a Minigun for a specific aircraft. The owners explored current options and ultimately decided that they could do it better themselves.

Iacobucci, a retired Army Lieutenant Colonel, has extensive experience in the Special Operations community and has been instrumental in the growth and expansion of Profense. In fact, over 50 percent of the employees at Profense have a military background. It is this real-world understanding of weapon application and implementation that has helped Profense experience meteoric growth in the defense industry.

The core of the Profense line is the PF M134 Minigun Weapon System. It is an electrically driven automatic Gatling-gun style weapon with a sustained rate of fire in excess of 3,000 rounds per minute. Users can also equip the gun with a “dual-rate” digitally controlled gun control unit (GCU) that allows the user to select either a 1,500 RPM or 3,000 RPM rate of fire.

The M134 fires the standard 7.62x51mm NATO cartridge and utilizes a link-fed ammunition system. The M134 is driven from a self-contained battery power supply, or power provided from the platform vehicle’s electrical system.

According to Profense, their M134 is the most technically advanced M134 weapon system available supporting U.S. defense forces, as well as NATO and non-NATO allies. Their claims have quite a bit of support. The Profense M134 exceeds the performance requirements defined in MIL-M-45920 for the U.S. Army and provides “state of the art” feature enhancements that separate the Profense M134 Minigun weapon system from the competition.

Profense has exceptional quality standards and performance objectives. To achieve these, Profense meticulously inspects each aspect of their gun and designs system-level improvements centered on performance, readiness, ease of use and long-term sustainability.

Unlike some other companies in the M134 space, Profense is actually manufacturing their own version of the M134 with several significant design differences from other guns in service today. This self-contained operation allows them to drive innovation and development of the M134 to levels unobtainable by other companies. Some of the advances Profense has brought to the table are brushless motors and advanced GCUs that make operation more efficient and effective.

One of the most interesting things I discovered about Profense is that they also designed and produced a 5.56 NATO version of the classic M134. Descended from the PF M134, Profense designed its PF 556 using the same patented technology and aerospace manufacturing processes, but with the additional benefits of being a lighter and more compact system.

The PF 556 is equipped with a fully programmable digital GCU that incorporates full brushless motor control of the weapon and the ammunition booster. This unique feature allows for precise weapon and ammunition quantity management.

I visited with Iacobucci and asked him what the major advantage Profense has on the competition. “We have an organic engineering capacity as well as an organic manufacturing capacity under the same roof,” he said. “This provides us incredible agility when developing new products.” Concerning specific innovations, he said, “The variable rate of fire we have developed allows training to be done at a lower rate of fire, making it more cost effective.”

Profense has established itself as the premier manufacturer of the M134. Iacobucci shared that their guns can be found “in every time zone across the world.” One advanced feature that the PF M134 and the PF 556 have is the ability to be operated remotely. This creates an opportunity to engage targets with the gun while the operator is in a secure and safe position.

The Profense headquarters and manufacturing facility is located just a short drive from Phoenix, Ariz. The team was kind enough to let me come take a detailed tour of their facility. I also got some range time. I have had the fortune of visiting some of the most advanced weapon manufacturing facilities in the United States, but Profense is one of the best I have seen. Their ability to go from idea to prototype under the same roof is almost unheard of. Throw into that a team with real-world knowledge about the application of these guns and you have a company sitting at the top of the hill.

While I may wax poetic about the technicalities and dry stats of range day, the truth is that it was absurdly enjoyable. The M134 falls into a very specific category of guns I call, “Hell Yeah.” I say that because once the initial burst starts and ends, most people are thinking, “Hell Yeah!” I also consider the M134 to be a ballistic anti-depressant as it can make just about anyone smile.

I have had the fortune of being around Miniguns prior to this and the PF M134 is different. The most visually noticeable feature are the cooling fins on the front of the six barrels. Profense has designed these fins to provide a 25-percent reduction in heat when the weapon is in operation. Profense patented this system and termed it as the Aeroclamp. The team at Profense is all business, though, and the range day and testing were executed with professional military precision. They understand that the end users of these guns will be facing dangerous situations and that performance and reliability are not just catch phrases.

Profense is not a one-trick pony by any stretch of the imagination. Besides the weapons, they offer training as well as OEM services. The Profense Team has over 50 years of weapon system experience incorporating a variety of rotary-, sea- and ground-based solutions. From rapid prototyping to full-rate production, Profense can support the most complex challenges. To add one more feather in their cap, they offer upgrade kits for the GAU-2, GAU-17, MK44 and M134. Designated MUK or Mission Upgrade Kits, the client can upgrade their current weapons with Profense tech.

There are few companies out there that have the pedigree and capability of Profense. Even more rare is a company that has such a dedication to excellence and the end user. It was an honor to spend time with the team. Honestly, it was one of the more enjoyable range days I have had the chance to take part in. The cliché thing to say now is that if you get a chance to run a PF M134 minigun, you should jump at it. The opportunities to do that are exceedingly rare, but hardcore shooters like me have eternal hope. For even more info, please visit profense.com.

This article is from the April/May 2021 issue of Ballistic Magazine. Grab digital or print subscriptions at OutdoorGroupStore.com.