0
SHARES
667
VIEWS
Share on FacebookShare on Twitter
Innovation – /ˌinəˈvāSH(ə)n/: Noun – the introduction of something new. With all due respect to Merriam-Webster, I would like to expand this definition to include a more colloquial “revolutionary.” I add this because the original definition simply doesn’t suffice when we look at the new rifle coming to us from POF USA. The new POF Revolution DI 6.5 Creedmoor is, as its name dictates, revolutionary! 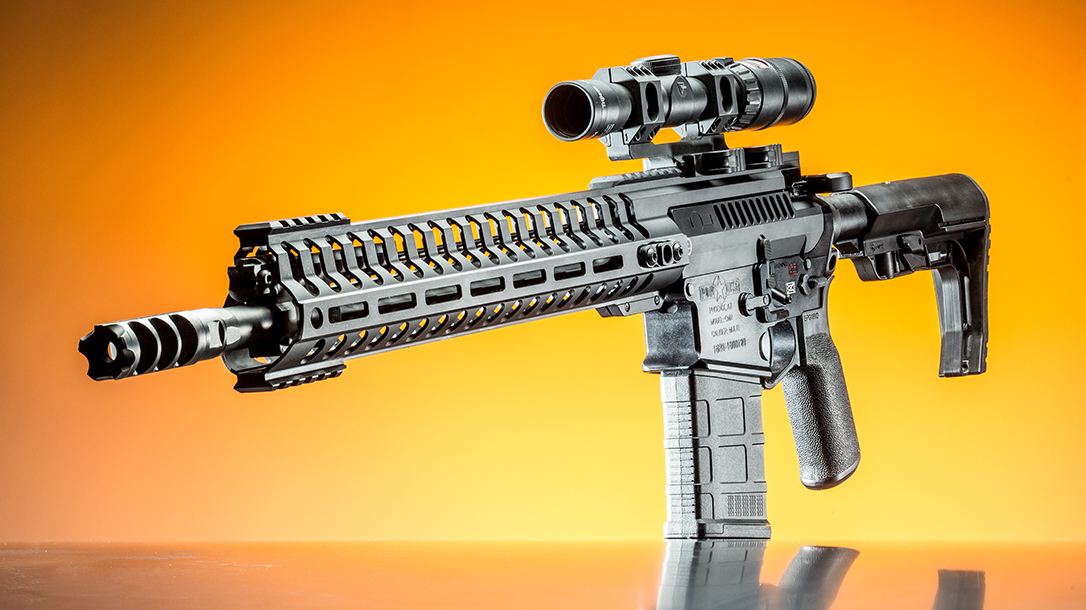 Having already gotten hands on the POF Revolution DI at the 2018 Athlon Outdoors Rendezvous, I can say the hype is most certainly real.

When POF released the Revolution, it caused its share of double takes. It is a .308 rifle with an almost identical footprint to an AR-15. The only obvious outward sign is the larger magazine well.

Unlike some other rifles that have raced to lose weight by just skeletonizing or chopping length, POF designed and built the Revolution from the ground up. The entire frame is smaller.

The Revolution features many standard 5.56 parts such as charging handle, bolt carrier and buffer. Even the front end has AR-15 parts like the heat sink barrel nut, handguard and five-position gas piston operating system.

The barrel extension, bolt assembly, upper and lower receiver are the exact same size as those on an AR-15.

This rifle was a home run and the industry saw it. In quick succession it won the Industry Choice Awards 2017 “Rifle of the Year,” the American Rifleman Golden Bullseye Award for 2018 “Rifle of the Year” and, most importantly, was the winner of our own Ballistic’s Best 2018 “Most Innovative AR.”

For many companies, it would be time to sit back and smile. However, POF is not your average company.

POF’s new rifle brings the same DNA to the plate as the .308 version, but has gone to a direct impingement system to get the front end even more slender. It also gives shooters a more traditional option.

As you would expect, it is a tack driver.

POF built the rifle with a 20-inch match-grade nitride heat-treated barrel using a 1:8 twist. A threaded barrl in 8×24 allows shooters to add a suppressor or brake of choice.

The rifle has the popular nine-position adjustable Dictator gas block, which allows shooters to tune the gun not only to ammo, but to a suppressor, should they use one.

The design consists of four small channels cut into the walls of the chamber, which allows a small amount of gas pressure to push against the neck of the spent case. This pressure assists in extraction by breaking the seal between the chamber and case, as well as pushing the spent case to the rear as the extractor pulls to the rear.

The process removes a tremendous amount of work that would otherwise be left to the extractor.

The trigger used on this beauty is the 4-pound EFP drop-in trigger system with KNS anti-walk pins. This is a great trigger that has a forward design that naturally guides the tip of your finger to the same resting place for a precise, smooth, consistent trigger pull every single time.

POF set the bar high with the original Revolution and its ambidextrous fire controls, and the 6.5 version gets them as well. They include an ambidextrous bolt release, safety selector and mag release.

The POF Revolution DI 6.5 Creedmoor is more than just another rifle jumping onto the 6.5 Creedmoor bandwagon. It is a well-designed lightweight shooter that brings forward thinking design features to the shooting world.

The rifle will be as at home in the field hunting arena as it will be on the competition circuit. POF has once again hit a home run using hardcore American design.

For more information, keep an eye on POF-USA.com.