by Joshua Swanagon
in Gear, Knives
0

For years, automatic knives have carried with them a stigma that they are only for criminals and hooligans; you can thank the efforts of Hollywood throughout the 50s and 60s for that. However, in recent years, Knife Rights, Inc., has worked hard to reverse restrictive legislation in many states throughout the U.S. that have banned the ownership and carry of automatic knives, making them more mainstream. The resurgence of the automatic knife has brought with it the popularity of OTF (out-the-front) automatic knives. These are ideal for single-handed use. 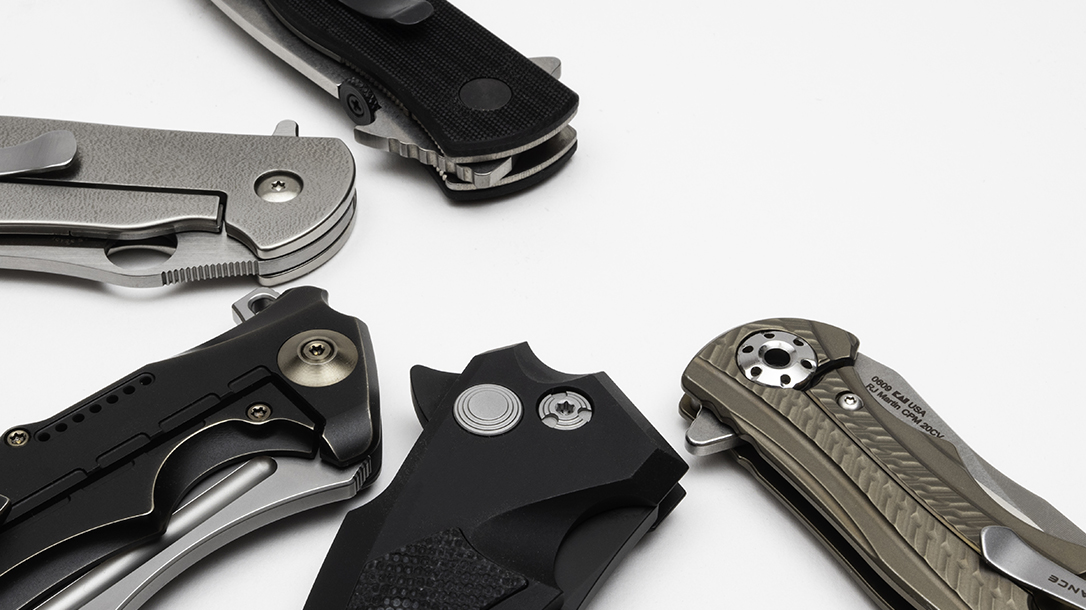 The Surge of OTF Automatic Knives

Where an out-the-side auto generally requires two hands to close safely, OTF automatic knives are double action. The blade can be retracted with a pull of the release button.

With the easing of auto laws throughout the states, many knife consumers have been turning to high-quality OTFs for their EDC. Two standouts are the Heretic Manticore E and the newly released Benchmade 4850-1 Om.

The Manticore: A Real Beast

Heretic Knives has been in business for about five years now. It has been putting out quality work—including a solid line of automatics—throughout that time. The Manticore E is a prime example.

At 3.3 ounces, it’s not a heavy knife. Yet when you get it in your hand, it has a substantial feel that would typically come with a much more heavy-duty blade. The 4.75-inch 6061-T6 aircraft-grade aluminum handle features bevels on both flats for a more comfortable grip during use, while also including light jimping in intervals around the extremities of the handle for a solid grip. The handle of the model shown is finished with Heretic’s Breakthrough Blue finish.

The 3.19-inch blade is brought to bear using the spine fire-release button with a solid and powerful snap; this brings the Manticore to its full 7.93-inch overall length. The very sharp CPM-S35VN blade features a beautiful recurve, drop-point blade with a tough DLC finish. It also has a swedge that runs approximately three-quarters of the blade from the tip to the subtle jimping on the spine just forward of the release button.

The butt comes to a subtle point that contains a lanyard hole and finishes with a glass-breaker on the very end. The nonreversible pocket clip holds tight in the pants during carry and is emblazoned with the Heretic logo. Heretic set the Manticore E up for right-hand carry. It also rides fairly deep in the pocket, but protrudes slightly for quick retrieval.

The Manticore E can be disassembled for cleaning via a T9 star bit, but I wouldn’t recommend it unless you have experience taking an OTF apart and putting it back together. There are a lot of small parts that can get lost, and reassembly is very tricky.

Starting at $280 MSRP, several iterations of the Manticore are available to suit your blade style and color preferences. For more information, visit hereticknives.com.

I will admit that I’m a bit of a small-knife guy. The brand-new Benchmade 4850-1 Om is a really cool little knife. I’ve used Benchmade knives, including other OTF automatic knives, for years now, so it was no surprise that I would like this one.

Weighing just 1.51 ounces, the 4850-1 is perfect for formal occasions because it won’t weigh down your dress slacks. With a closed length of 3.4 inches, its smaller size would also lend itself nicely to women’s pants, since they typically have short pockets that might not be able to fit a full-sized OTF. The brilliant blue 6061-T6 aircraft-grade aluminum handle stands out beautifully. It features subtle texturing on the flats and two areas of light jimping on the bottom.

Like the Heretic, the blade of the Benchmade 4850-1 is brought to bear with the spine fire-release button. It has a surprisingly stout snap for its size. The incredibly sharp 2.48-inch CPM-S30V blade features a drop point with a swedge running the length of the blade. With an overall length of 5.88 inches, the 4850-1 is just big enough for most typical daily tasks.

Unfortunately, at over 2 inches, the Benchmade 4850-1 is not California legal, but it’s close. Maybe someday California will ease their size restrictions slightly and this will fit right in there.

The butt finishes flat with a slight angle towards the spine; there, it features a small lanyard hole just big enough for a single strand of paracord. The pocket clip is reversible for either right- or left-handed carry. It rides low in the pocket for a more clandestine look.

The pocket clip does not lie tight against the handle. I think this makes it perfect for suit pants, since you won’t want a tight pocket clip tearing up your expensive suit.

Like the Heretic Manticore, you can disassemble the Benchmade 4850-1. However, I don’t recommend it for the same reasons as the Manticore—or any OTF for that matter. If you have an issue that requires the disassembly of your OTF, contact the warranty department.

With an MSRP of $320, this blade is delivers on value. Visit benchmade.com for more information.

Typically, OTF automatic knives aren’t hard-use knives and are thus not something that you want to beat on. For that reason, along with typical uses of each of the knives, I opted for some simple light cutting tasks to test the comfort of each knife, as well as the edge, out of the box.

With both knives utilizing premium steels, I wasn’t surprised to find that they both performed admirably. Each came incredibly sharp and ready for work. Although this isn’t a head-to-head comparison, I performed the same tests with both. I considered the performance of each knife based on its own merits.

One of the first things I like to test with OTF automatic knives is the safety feature when opening. Being that OTFs utilize a spring-loaded release, it’s important to make sure that the blade isn’t going to do major damage if it opens—intentionally or otherwise—with a body part in front of it.

I held each knife up against a piece of cardboard and fired the release mechanism to see how far each would penetrate the cardboard. The Heretic Manticore E protruded from the back side of the cardboard just under an eighth of an inch. Meanwhile, the Benchmade 4850-1 protruded approximately 1/16th of an inch. Neither knife protruded when I held the knife a few inches away from the cardboard upon actuation.

Next, I used each knife to cut up a large piece of corrugated cardboard. It’s very hard on knives due to the construction process of cardboard. Each knife performed excellently and held a perfect edge. The size of the Benchmade made gripping it a little tougher during a heavier cutting task like this. However, it was sharp enough to compensate.

After that test, I moved on to cutting some half-inch climbing rope with the Manticore E. I also cut some paracord with the Benchmade. Both cut very cleanly. I then moved on to some thick leather, which both knives made short work of.

Next, I cut up some plastic packaging that’s always so hard to remove from products. Ironically, it was for a sharpening system that wasn’t necessary, even after I finished all of the testing. I had no issues with either knife for this task.

Finally, after using each for myriad daily tasks and then running them through testing, I decided to try out the edge retention and sliced up a phone-book page. I was able to produce clean cuts the entire length of each blade with no snagging or tearing.

Living in Michigan, I’ve been fortunate that Knife Rights was able to repeal restrictive legislature regarding automatic knives here a few years ago, making it legal for me to carry great knives, like the Heretic Manticore E and Benchmade 4850-1, instead of just look at them online and dream.

The beauty of these two knives is that they each fill a specific need, and they do it well. The Heretic Manticore E is a great size for EDC and most daily tasks. Meanwhile, the Benchmade 4850-1 is perfect for dress occasions because it rides deep and out of sight. It also won’t tear up the pocket of your dress slacks and won’t weigh your pocket down, messing up the lines of your suit.

With the Heretic Manticore E and Benchmade 4850-1 Om, you can have an OTF for literally any occasion. Make sure to check kniferights.org to see if your state allows the carry of an automatic knife before purchasing one.