You walk into your local grocery store and immediately see an intense discussion going on. There is a middle-aged man arguing with two older women. The manager seems to be on his way over and you can now hear the discussion. As you approach you see a man practicing open carry. He has an AR-15 slung across his back as well as a revolver in an outside-the-waistband holster. Your psychic powers kick in because you already know what the fuss is about. You clearly hear the manager now as he tells the man he will have to leave. As he is stomping out the door, he shouts back at the group, “It’s my constitutional right!” So how do we address this in the firearms community? 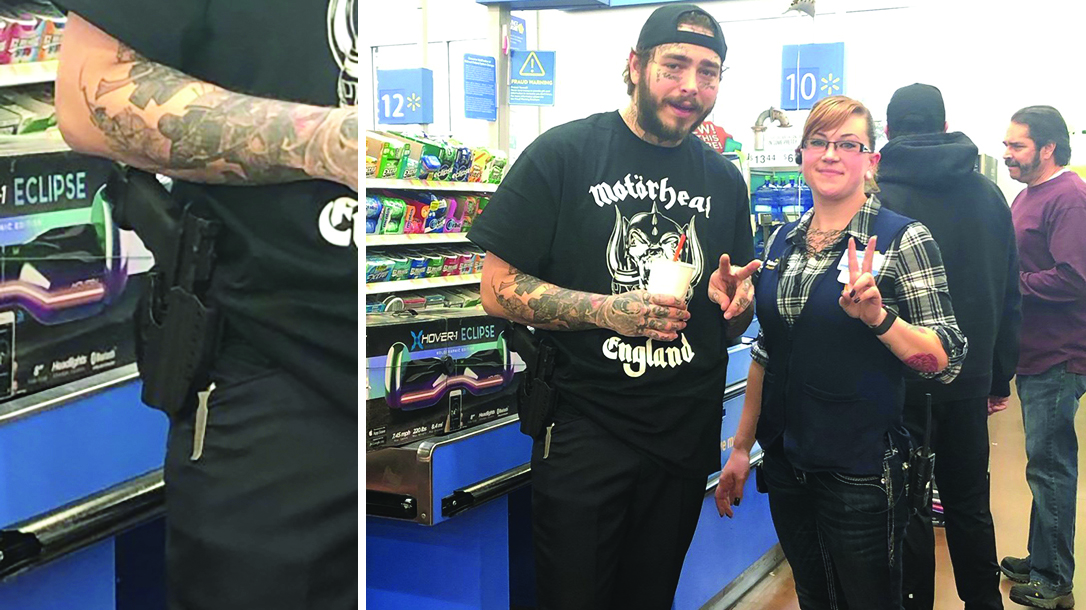 There was a time when open carry was done out of necessity. In the Old West for example, it was difficult to conceal carry two Colt revolvers. Today however, open carry is more of a political and cultural statement than it is a necessity. Mechanically, open carry does present some advantages should a threat arise. You will have easy and quick access to your weapon. There is a reason police officers carry their duty pistol on their hip. However open carry does present some pitfalls as well.

First is that you are openly announcing that you are armed. A concealed handgun, conversely, announces nothing to a potential foe. You walk into the Quickie Mart at 1:00 am to get milk, the crack head getting ready to rob the place has seen you. While most would see this as a deterrent, it rarely is. If they are truly a hardened criminal, they will more than likely just walk up and shoot you in the back of the head as you lean into the cooler to get your milk. You won’t know because the criminal is carrying concealed. This is especially true with people carrying rifles. Most times when I see this, the rifles are slung across their back.

My question is, just how fast do you think you will be able to bring that gun into a quickly developing fight? The last tactical downside is that almost every single person I see open carrying is using a standard Kydex holster or worse. There is no additional retention, which puts it up for grabs should you get into a physical altercation.

The other thing to consider is its effect on the people you encounter. The debate often turns heated right here. The primary argument thrown out there is. “It’s my Constitutional right.” Actually, it’s not. The United States Constitution does not say at any point that you are allowed to or should open carry. State law gets even tricker. And some places, like the District of Columbia or New York City, will proverbially nail you to the wall for carrying of firearms. Now, it certainly doesn’t forbid it obviously, but to use this as a rally cry diminishes our fight to preserve the 2nd Amendment.

The gun-owning portion of the U.S. population is growing every day. But there are still a large number of people that are on the fence about it. They are not anti-gun, but they have not joined the team yet. These people in most cases have very little experience with guns and are nervous when they see them. This is why there are sometimes events like our opening story.

What’s worse though, are the times when people simply don’t say anything. They will develop an opinion though and it is rarely a positive one. Some will see Johnny Cool open carrying a rifle and it makes them nervous. They then throw the entire gun owning community into this framework and like that they begin to develop anti-gun sentiment. That’s how we create gun control advocates. Hell, even I turn on my internal alarm when I see someone open carrying. I have no idea who you are or what your intentions may be. This is especially true when I see the person has absolutely no idea of what they are doing.

Open carry is a very emotional issue with firm beliefs on both sides of the fence. I actively discourage open carry in regular everyday settings. The downside offsets any perceived benefits. For those screaming at your computer right now about “ma’ rights,” I would suggest that you look at the bigger picture and how it affects the perception of gun owners in America. We must all work together not only to preserve the 2nd Amendment, but to expand the number of people that feel the same way.

This installment of Mr. Manners seemed to really strike a chord. Tons of readers chimed in, across the Ballistic Magazine social media pages. Responses ranged from some version of “2A All the Way!” to “Come on man, be smart.” For some, openly carrying handguns, openly carrying long guns, a visible handgun in public – they’re all means to legally carry a gun. But for others, anyone outside of law enforcement carrying loaded firearms in public makes them nervous. Two sides to a very hot-button coin.

Everyone seems to have an opinion on Open Carry, and we appreciate all the great thoughtful responses. Here are a few good ones via Twitter: