On the range at the 2018 Athlon Outdoors Rendezvous in Montana.

“That’ll be $22,” the clerk said to me as I was reaching for my wallet. I cringed a bit. Due to inclement weather I had spent more time in the shooting bay than I had originally planned. What should have been 30 minutes turned into three times that amount. The plan was to shoot a few groups and get a general feel for a 1911, that technically “didn’t exist” yet. It’s preferred to do such testing outdoors in places where prying eyes can’t invade my space, but the Nighthawk Custom Firehawk didn’t raise an eyebrow because it’s not crafted to do so. At any rate, I blamed Nighthawk Custom for my time limit oversight. 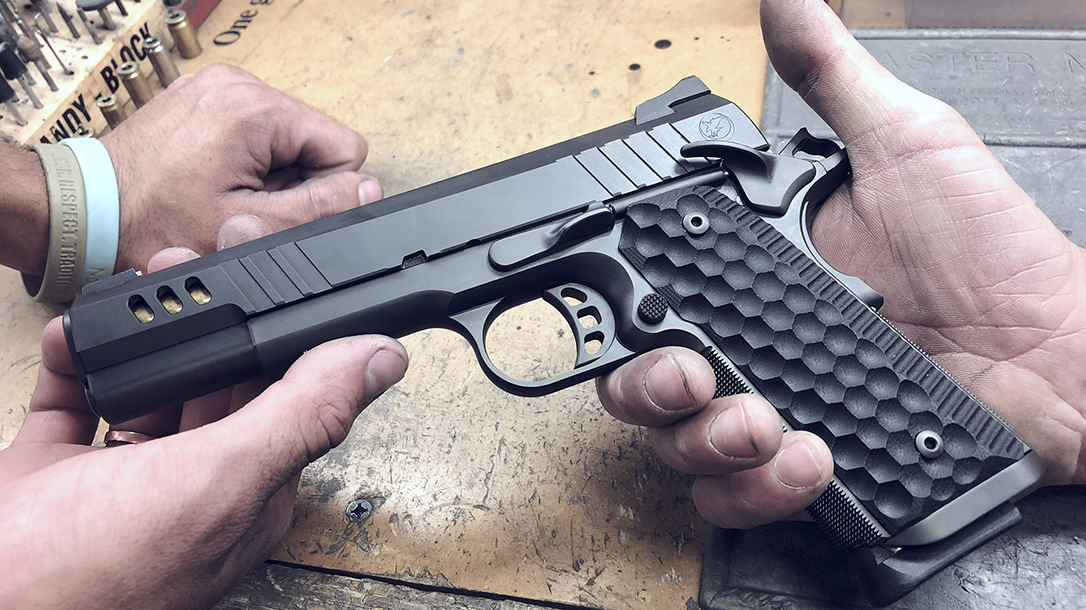 The Firehawk looks much like any other premium level 1911, save for the compensator attached to the front of the barrel. “Big deal!” you might think. But if not for the extremely thin line between where the comp stops and the slide starts, you wouldn’t know it was a compensator until you were close enough to see the gaping hole on top. This is nearly the only tell-tale sign that something is different with this beauty.

Compensators on pistols is obviously not new, but there has been a resurgence of them. Whether you agree or not, they are making their way onto carry guns, appearing in packages that look more factory than they do “accessorized,” which is how most used to appear — at least for plastic framed pistols anyway.

Nighthawk has produced other compensated pistols in the past but this venture is different, utilizing new techniques to get a clean and inconspicuous end result. If you were dealing with a more typical pistol, you’d also be dealing with the inevitable additional length from the compensator; that is unless it were a hybrid compensator, which is how Nighthawk Custom has done it in the past. This version is a true, thread-on compensator — machined, attached and blended to look like part of the slide. And this interaction keeps the standard Government Model 5-inch overall length so that new holsters aren’t necessary. The NHC comp will fit into your current full size 1911 holsters seamlessly.

It’s important to understand that the Nighthawk Custom Firehawk isn’t just a 1911 regardless of model, with a comp stuck on the end of the barrel; that would be a grave understatement. The Firehawk is a completely custom built compensated 1911, with many features that are new to such a build. Nighthawk utilized processes that it won’t reveal.

The compensator itself is 1.1 inches in length, leaving the slide at 3.9 inches. I asked Nighthawk COO Nelson Davis exactly how the comp was attached. He informed me that it was threaded on a specific way, then permanently affixed. This is because once attached, additional hand fitting must be done for everything to match up aesthetically.

The compensator features one large port that Davis says they worked on extensively to get to their desired effect. The size and angle of the port needed to be specific. Add to that, the slide was now shorter and lighter, yet part of a still longer overall package, so slide recoil and muzzle flip were a challenge, which are separate things. This became one of Nighthawk’s other significant challenges. A new spring was necessary and a custom fit spring needed to be designed.

Nighthawk’s Firehawk utilizes a bigger spring and plug. The longer spring, which extends past the actual length of the barrel, pushes the plug forward where it tucks beautifully into the bottom portion of the compensator. So, while the Firehawk is actually a shorter action, it utilizes a longer spring and runs on a full size frame. Get all of that?

Another feature is the compensator’s slanted “bull nose,” which is an aesthetic addition and I’m told eases holstering a bit. Once attached the compensator is hand blended with the slide and this is the reason for the permanent bonding.

The barrel is a custom-made barrel as well with threading specifically for the compensator. Once attached and blended the entire slide gets a beautiful french border. This cut further enhances the look of the compensator and slide fitment. From a distance you’d never know it wasn’t one piece.

The compensator has a dovetail where the front sight is fit. It is of course done meticulously and the front sight gets an 18k gold bead insert. This insert is meant to aid in tracking of the front sight. Since it resides behind the comp port, it shouldn’t get too cruddy like the sights on hybrid comp/ported-barrel systems. 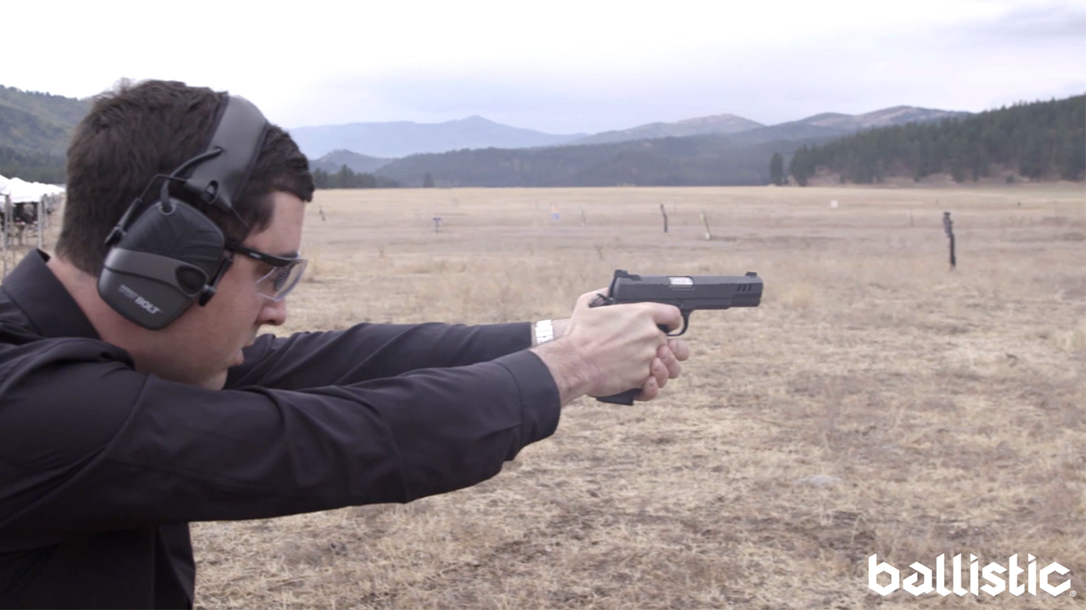 There is a lot happening in the top half of the Nighthawk Custom Firehawk, but there are plenty of goodies down below that have kept Nighthawk consistent in performance and feel. The front and rear straps get 25 LPI checkering that feels good and doesn’t bite even small hands. A healthy one-piece mainspring housing extended magwell sends magazines home with ease and is fit as meticulously as the compensator.

Grips are VZ G10 custom with Nighthawk medallion inserts. They also feature a cut out to expedite your trip to the mag release button. The grips look and feel more minimalist if you will, but still allow for plenty of grip. A single sided thumb safety and the now famous Heinie Ledge rear sights round out other notable features. The trigger is the Nighthawk clicker ticker and breaks at 3.5 pounds after a short take up.

So where does the Firehawk fit in your pistol line up? My verdict is still out on compensated carry guns. When I was coming up, comps on carry guns were frowned upon and I’m still struggling with that. Having had a couple of hybrid comped guns and seeing them spew molten matter straight up, I wanted to avoid contact with that if I had to fire from retention in an unfortunate circumstance.

This is also a full-size, all steel gun, so it’s not light for carry purposes but it’s awesome for general shooting purposes. That said, plenty of people carry heavy, full-size guns and this would be no exception, especially if you’re not an appendix style type of pistol-packer.

The shooting experience is an awesome one with this pistol. It’s different for sure. The comp makes the action feel slower. I always felt like I was ahead of it although I wasn’t. The comp works well with run of the mill 115 gr. ammo that you’d use for blasting purposes. Hotter ammo reveals an efficient compensator that allows the gun to track with ease. I learned that you only need hold the gun firmly then press the trigger — no other work is necessary with the Nighthawk Firehawk. Choking up on it too tightly or driving it too hard will have you dumping shots. So, just relax and enjoy the ride.

While in Montana at the 2018 Athlon Outdoors Rendezvous, I shot the Comp gun out to 130 yards. It will hit consistently if you can do the work. It’s a fun little challenge, made more enjoyable by the dynamics of the gun. But this is not the purpose of the comp gun. No, it was made to shoot quickly and it does that well. With the aforementioned learning curve taken into consideration, a little time and patience will have you shooting perhaps better than you ever have simply because of the lack of muzzle flip and the slower, muted feeling over all. Why wouldn’t you want your shooting experience this way?

I happened to have a Nighthawk Custom President on hand as well, so I brought it along for comparison purposes. I love the President. It’s the best shooting pistol I’ve ever wielded. It tracks straight and in my mind I remember getting it shooting softly, and it did until next to the comp.

The Firehawk made the President feel snappy and this was a surprise. Roughly 150 rounds through each pistol later, it was clear that the President gave more in the way of optimized shooting experience, and that is saying something. At 7 yards, hammers with the Firehawk made me giggle out loud. I’m not this good. The gun is.

I achieved my best group with Sig V Crown 124 gr. at just under an inch at 25 yards. It took all I could muster, and it might have been easier in daylight than indoors, but I digress.

I’m huge rifle fan, and less so of pistols, seeing them mainly as tools for carry and training. The Nighthawk Custom Firehawk makes me want to shoot pistols more. Suddenly I can come up with more reasons to run to the range to burn up a box of pistol ammo. The question you’ll need to answer is “Where does the Firehawk fit into your world?” For pleasure, carry, or collection?”

Oh and you’ll need to stop and decide on caliber as well, since a .45 ACP version is available to accompany the 9mm model I shot. No matter which role you choose, it’ll get it done in classic style with compensated prowess, and it’ll probably have you overstaying your welcome wherever you decide to shoot it.