How did Jerry Miculek end up with his own shotgun — the 940 JM Pro from Mossberg? Well, Miculek was setting world records with revolvers more than 20 years ago. Instead of resting on his laurels, he spent the last 20 years redefining the world of competition rifles, shotguns and handguns. When he talks about what works and why, the rest of us listen. He isn’t speaking from theory. He’s talking from vast “been there, done that” experience. 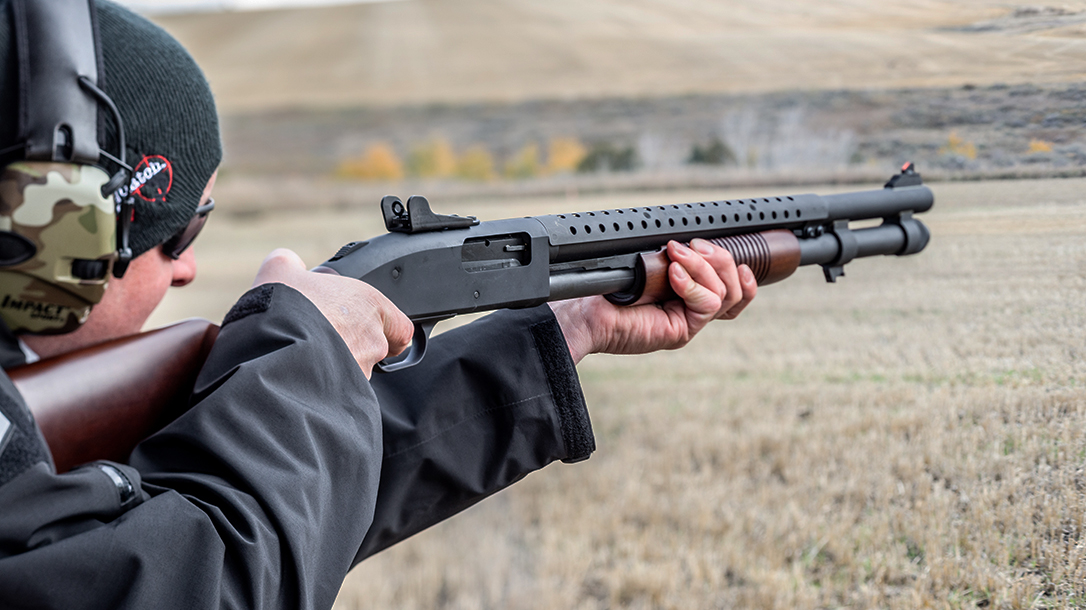 VIDEO: Old Meets New With the Mossberg 590A1 Retro Shotgun

Meanwhile, Mossberg has been making well-designed, durable, affordable shotguns since before I was born. So when I heard it was releasing a semi-auto competition gun that Miculek designed, I knew it would be a shooter. I recently got to try it out in Driggs, Idaho, at the 2020 Athlon Outdoors Rendezvous with Linda Powell from Mossberg.

Powell explained that Jerry and his daughter Lena were shooting the Mossberg 930 competitively and they suggested ideas to improve it. Jerry sat down with the engineers to go over his vision. They took his advice and slowly made the gun a reality. The result is the 940 JM Pro. The heart of the gun is still the tried and true Mossberg 930, but it looks a lot different now.

The Build Behind the Mossberg 940 JM Pro Shotgun

The engineers changed the self-regulating gas system so it has a series of vents and steps that help scrape carbon off while shooting. Recommended cleaning went from every 250 shells to every 1,500 shells. They also nickel-boron coated some of the parts to make cleaning easier and prevent fouling. The forend is also narrower, making it easier to grasp and swing onto target.

The stock has inserts to adjust the LOP from 13 to 14.5 inches. Stock shims provide not only Cast Off or Cast On, but also varying drop to properly fit the gun to each shooter. Not surprisingly, the bolt handle and bolt release button are much larger; this obviously makes them easier to manipulate for speed under stress.

Mossberg widened and lengthened the loading port; this allows a practiced loader to quad load shells, like Keanu during his “John Wick” training. Mossberg also beveled the edges to help guide the shells in and prevent cuts or scratches from any sharp edges. And best of all, the loading gate is square at the front instead of having the common thumbnail catching, pinch point that you find on a lot of other competition shotguns.

The 940 JM Pro comes in two color options: Black camouflage or gray with gold accents so you can find your shotgun when it’s on the rack with 10 others at a competition.

More Change on the Way

Powell told me that the reception to the changes in the 940 JM Pro was so great that Mossberg intends to roll many of the features over into both its hunting and tactical lines of shotguns. Larger controls are handy when you are shooting with gloves or in a fight for your life. And who doesn’t want a gun that needs cleaning six times less often than the one you’re shooting now? Once again, we see the competitive world helping to shape and improve the guns we use in other arenas.

The Mossberg 940 JM Pro is an out-of-the-box, competition ready shotgun with all the bells and whistles. MSRP comes in at $1,078. Now I need to ask Mossberg how I can get one autographed by Jerry. For even more info, please visit Mossberg.com.