by Dennis Adler
in Guns, Rifles
0

The modernized 1892 Alaskan Takedown from Taylor’s & Co. Firearms is a beautiful rifle, but it has history. See, the Winchester Model 1892 was an ideal companion rifle for men who spent a great deal of time on horseback. 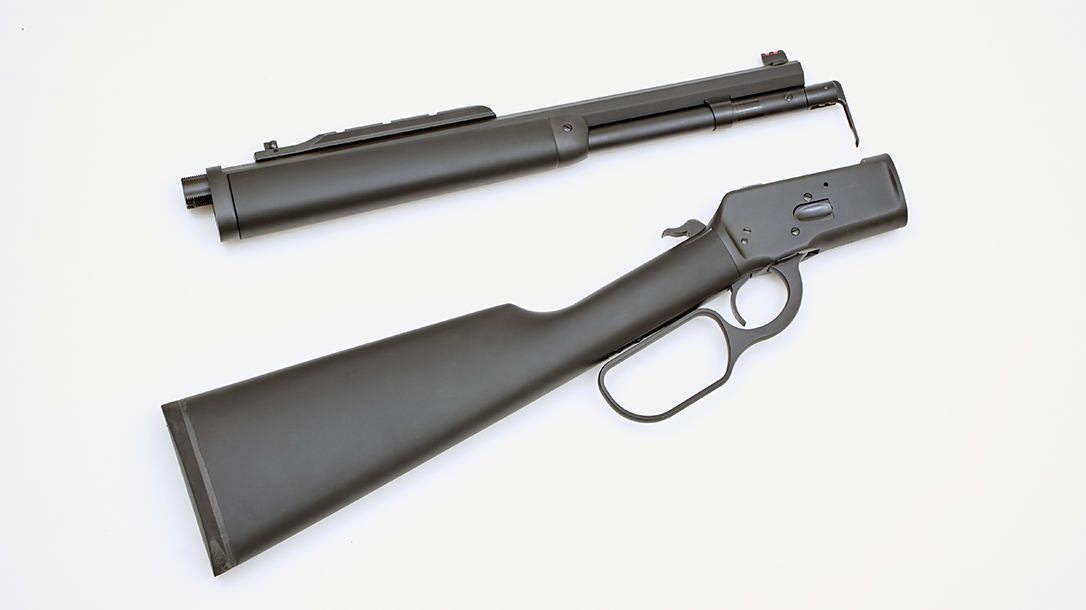 Designed by John Moses Browning, who had developed Winchester’s very successful Model 1886 in the vaunted .45-70 Government caliber, the lighter and elegantly designed Model 1892 was essentially a scaled-down 1886 that had been requested by Winchester’s president, Thomas Gray Bennett. He initially offered John Browning a hefty $15,000 if he could design the new gun and have the prototype in New Haven within two months. Browning did it in less then 30 days! Bennett paid him $20,000 for the design, and the 1892 went into production shortly after.

The Model 1892 and Its Progress to the Alaskan Takedown

Planned as a successor to the Winchester ’73, the Model 1892 was also originally chambered in .44-40. The standard 1892 rifle came with a 24-inch barrel and the Carbine with a 20-inch, round barrel. The most notable of all variations, however, was the “Trapper,” which was available in 12-, 14-, 16- and 18-inch barrel lengths. The name reflected the gun’s popularity among trappers and frontiersmen who spent much of their time either hunting or living in the wilds. It was a powerful yet small and easily carried rifle.

Colt offered Single Action revolvers in the same calibers as the Winchester, including .44-40, .32-20 and .38-40, the latter being popular among lawmen because of its .40-caliber bullet and light 38-grain load. Generally, the most common combination was a Colt Peacemaker in .44-40 paired with the 1892 Carbine. The takedown version of the 1892 made the gun even better suited to trappers who needed to pack as much gear as possible, and a two-piece rifle had a definite advantage for heading into the wilds.

Making the 1892 one of the most memorable guns of the 20th century was the special large-loop carbine version carried by John Wayne in the 1939 John Ford classic Stagecoach. Since that point, the Model 1892 has remained one of the most popular of Winchester’s Western-era rifles.

As a success story, the 1892 model, in all of its variations—Sporting Rifle; Fancy Sporting Rifle; Carbine; Takedown version; Half Magazine Carbine; and a long-barreled, full-stock Musket—surpassed 1 million sales over a 50-year period. And even today, an 1892 Short Barrel Rifle is still available from Winchester.

The 1892 Alaskan Takedown from Taylor’s & Co. Firearms is manufactured by ArmiSport Chiappa (known for its superb reproductions of famous Winchester rifles and shotguns) and combines traditional design with modern technology, creating a faster handling and more durable 1892 lever-action rifle specifically designed for the sport hunting market. This takedown rifle chambered in .357 Magnum features the time-proven Winchester lever-action design with a 16-inch, Trapper-length barrel. The Alaskan is also available with a 20-inch, octagonal barrel, as well as a .44 Remington Magnum chambering.

With hunting as its primary use, this gun is specifically tuned to provide maximum knock-down power using Hornady LeverEvolution 140-grain FTX ammunition or other high-velocity .357 Magnum rounds. For packing into the wilderness, the 1892’s takedown feature makes this an easy rifle to store and assemble when needed.

While the fundamental design is still from 1892, the sights are modern—a handcrafted, aperture-style Skinner Express rear sight paired with a tall, red fiber-optic front blade. This is a monumental improvement over the traditional semi-buckhorn rear and gold-bead front sights.

The Skinner’s rear aperture is easy to acquire and the red fiber-optic front sight centers quickly, getting you on target posthaste. The Skinner sight is made of carbon steel and finished in a non-reflective black oxide. The windage- and elevation-adjustable rear sight is also dovetailed into the base, which has a polished blue-black finish and the Skinner name. The standard rear sight comes with a 0.096-inch aperture (other apertures are available).

The Alaskan’s 16-inch barrel is pre-drilled and tapped for mounting optics, so there is little to do here except go solo with the Skinner sight or opt for a scope. For ease of carry and quick sighting, though, the Skinner is hard to beat.

The Alaskan’s finish is another striking contrast to traditional lever-action rifles. The 1892 has matte silver hard-chrome plating on the receiver, the barrel, the magazine tube and the finger lever to withstand the elements and resist rust, making this an all-season, all-weather sporting arm. The stock and forend are also weatherized in their composition, which is wood with a distinctive black, rubberized, overmolded, soft touch finish. This provides a firmer grip on the forend and a soft but gripping cheekweld.

The buttstock is fitted with a 0.5- to 0.25-inch-thick, crescent, anti-shock rubber recoil pad. There is one other exceptional feature—the Alaskan has a John Wayne, Rifleman-style, large-loop finger lever for faster handling in the field, especially when wearing gloves. And for the purists there is a traditional-style (Winchester) lever-action loop available as a $180 option. There are so many distinctive features on this rifle it’s hard to pick one, but the large loop certainly sells it.

The large loop is easy to work and the 1886-derived Browning action extracts .357 Magnum brass and loads rounds with exceptional ease. The original 1886 design used vertical locking bars to secure the bolt, rather than the old-style Winchester toggle-link used on the Model 1873 and earlier Winchesters dating back to the Henry rifle. On the 1886, and thus on the 1892, the vertical locking bars proved stronger and required less space to operate than the old toggle-link, thereby allowing a receiver that was actually shorter than the Model 1873’s.

The new bolt design also did away with the need for a separate, sliding dust cover over the breech. The Alaskan retains all of these features, making this not only a durable gun on the outside, but on the inside as well.

The 16-inch-barreled .357 Magnum Alaskan model has a capacity of 7+1. To test the Alaskan, I opted for all high-velocity ammo starting with Hornady .357 Magnum 125-grain FTX, Federal Premium 158-grain JHP and Remington Golden Saber 125-grain JHP. The heavyweight Federal load clocked 1,679 fps through the traps on a ProChrono chronograph placed 10 feet from the muzzle, Hornady flew at 1,754 fps and the Remington registered an average of 1,625 fps. I tested from a range of 100 feet with all shots fired from the shoulder.

Weighing a modest 5.9 pounds, the Alaskan isn’t light. However, it’s not a heavy rifle to pack when hunting or exploring. Also, trigger pull on the test gun averaged 4.3 pounds; this makes it comparatively light but a little heavier than an original Winchester.

The target was a large cardboard flat with a red dot in the center as a point-of-aim reference. From 100 feet, the best five-round group measured 1.27 inches with Hornady FTX. Remington clustered within 1.5 inches and Federal spread five rounds over 1.5 inches. Meanwhile, there were overlapping shots with Federal and Hornady with the best three groups averaging 0.75 inches. Overall, shooting off-hand from an un-rested position with open sights, the Alaskan is every bit the rifle its famous Winchester predecessor was more than 120 years ago. For even more info, visit taylorsfirearms.com.