by Rob Garrett
in Guns, Rifles
0

"Springfield Armory has indeed started a new chapter in the life of the company, and it is far more than 'just another AR.' I look forward to seeing where this new initiative takes the company and the firearms industry as a whole."

In September of 2016, Springfield Armory launched a new marketing campaign aimed at “honoring and supporting those who wake up every day determined to protect what they have and those who are forward-thinking, independent and believe that safety is their responsibility.” The second part of the announcement was that, on Nov. 1, 2016, the company would unveil a “new product unlike any other from Springfield Armory.” A new website was launched to bring attention to the new product.  That website, defendyourlegacy.com, featured independent young people with active and athletic lifestyles. Catchphrases from the Twitter universe were overlaid on their photos. Then the wait for the new product began, complete with the site’s countdown clock. Speculation abounded as to what the new firearm was going to be. Given the CrossFit and Tough Mudder photos on the site, many speculated the Springfield Saint would be a small .380 or maybe a 9mm personal-defense pistol to compete with the Glock 43 and the S&W M&P Shield. I had read a number of the online posts before I signed an extensive non-disclosure agreement and was “read in” on the project. One comment I remember seeing was, “Would Springfield really get into the AR market?” 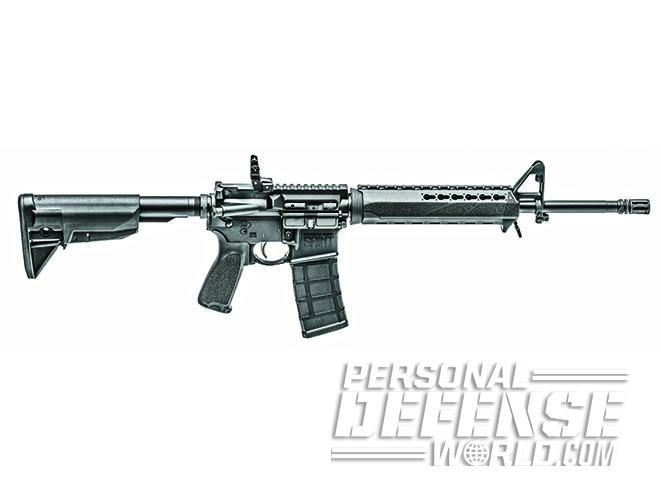 Of course, as you can see, the answer is a resounding “Yes!” I was quite surprised that, even in the hours before the official release, there were no leaks. For the record, Springfield Armory, and those who were given an early preview of the Springfield Saint at a writer’s event in Las Vegas, did a great job at keeping this project under wraps. I’m glad everyone understood that “non-disclosure” means just that! Kudos to all those involved in the writer’s event in and others who were read in early.

When the Saint rifle was announced, the blogosphere blew up with a wide range of comments. Some questioned why we needed another AR. One commentator mentioned that “Springfield was 15 years late to the party!” The most common response that I read was, “It is just another AR.”

While these are legitimate comments—and from one perspective, accurate—they miss the overall context in which Springfield launched the Saint. Springfield Armory has set out to change the narrative and redefine firearms ownership and personal responsibility. Is it a clever marketing campaign? Yes. The new website defines legacy as “the willing and capable who refuse to give into the growing plague of believing somebody else is going to do it for me.” In other words, Springfield is attempting to get us, and a new generation of shooters, back to our roots.

So why an AR? According to Springfield’s marketing department, CEO Dennis Reese wanted to do an AR for several years, but the timing was just not right. Now all of the pieces have fallen into place and Springfield Armory is in the AR business. And it partnered with Bravo Company Manufacturing (BCM) for a number of components, including the stock, pistol grip and forend. BCM has a reputation for being a solid company that produces some of the best rifles and parts on the market. In addition, it places a high value on patriotism and providing employment to veterans. This partnership enabled the Saint to be equipped with quality parts while keeping the price competitive.

From my perspective, there is no more maligned and hated rifle in the industry than the AR. In the minds of the left, the AR is evil by design, appearance and intent. Several years ago, there was an attempt to redefine the AR, and similar designs, as “modern sporting rifles.” To the left, that is like putting lipstick on a pig. It is still a pig. The assault rifle bans of previous years were centered on appearances, such as the dreaded bayonet lug, the evil flash suppressor, and the obnoxious and deadly pistol grip that protruded conspicuously below the centerline of the rifle. And, let’s not forget those evil “clips” that hold too many bullets! I think most of us “gun people” will agree that all of the political hyperbole had an impact on many in our country, especially young people. So I really applaud Springfield Armory for setting out to change this narrative and specifically appealing to a younger generation of shooters. 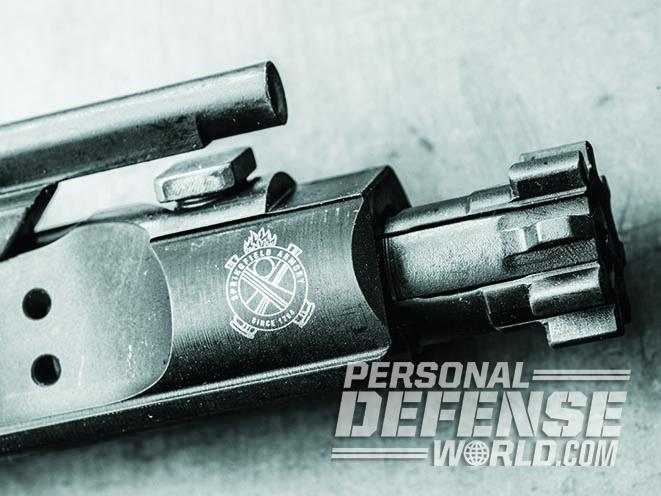 I received my test sample three days before the official release. Each Springfield Saint comes in a very nice hard case with buckle latches and sturdy hinges. The top of the case features raised Springfield Armory and Saint markings. As for the rifle itself, I was immediately impressed with its fit and finish.

The upper and lower receivers are made of 7075-T6 aluminum that has been Type III hardcoat anodized. A nice addition is the Accu-Tite tension system in the lower receiver, which helps hold the upper and lower together tightly for greater precision. As for the upper, the 16-inch barrel is manufactured from chrome-moly-vanadium steel with a 5.56mm NATO chamber and a 1-in-8-inch, right-hand twist rate. The barrel has also been Melonited for durability and corrosion resistance.

The Springfield Saint is a traditional direct-impingement rifle with a mid-length gas system and an A2-style gas block and front sight. Surrounding the barrel and gas system is BCM’s new PKMR handguard, which is low profile and offers textured panels for positive support-hand control over the rifle. KeyMod slots are located in the 1 and 11 o’clock positions for accessories.

The Saint is also equipped with a Springfield Armory low-profile, flip-up rear sight that offers dual apertures and 0.5-MOA windage adjustments via a small knob. Internally, the M16 bolt carrier group is machined from Carpenter 158 steel, and the bolt is shot peened and magnetic-particle (MP) inspected.

The lower receiver has some nice upgrades, including BCM’s six-position Gunfighter stock and Mod 3 pistol grip. Another nice touch is the safety selector, which has pictographic markings. The magazine and bolt releases are standard AR, but the trigger is surprising. Springfield selected a single-stage trigger and then applied nickel-boron to the fire control components. The trigger on my test rifle broke cleanly at 7.19 pounds with no creep or grit. However, the pull weight felt much lighter due to the trigger group’s quality parts and nickel-boron coating.

Shortly after the embargo was lifted, but prior to hitting the range, I stopped by two of my local gun shops to let a few friends get a first look at the rifle. Interestingly, in both shops, customers had seen the press releases and had come in and asked about the Saint. This was their first look at the rifle, and everyone was impressed with the quality and selection of parts. The most positive comments regarded the trigger and BCM furniture. At 6.69 pounds unloaded, the Springfield Saint is reasonably lightweight and well balanced. The angle of the BCM Mod 3 pistol grip was also mentioned as a positive. 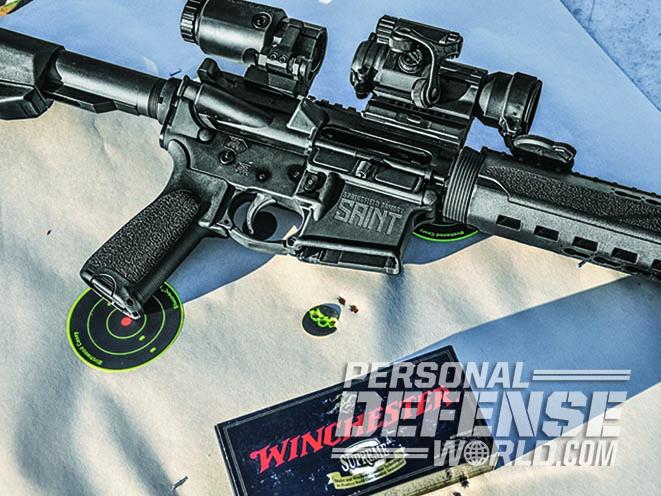 When it was time to hit the range, I installed an Aimpoint PRO (Patrol Rifle Optic) on the Saint. Featuring a 2-MOA dot, the PRO is powered by a single 3-volt lithium battery. Aimpoint’s advanced circuitry gives the PRO a run time of up to 30,000 hours on the seventh daylight setting. To test the carbine at 50 yards, I also installed the new Aimpoint 3X-C magnifier. The 3X-C was designed to provide the commercial market with a quality magnifier at a very reasonable price point. The 3X-C features centering adjustments and a dioptric adjustment. Aimpoint offers a quick-detach/flip mount for the 3X-C to give the shooter more options. The 3X-C also makes an excellent monocular.

For the formal range testing, I selected Hornady’s 55-grain TAP Urban load along with Federal’s 55-grain Sierra GameKing HPs and Winchester’s 50-grain Ballistic Silvertip rounds. The Hornady TAP Urban load was developed for law enforcement, and it’s my first choice for personal defense. The Federal and Winchester loads are sporting rounds that are suitable for hunting. The Saint was 100-percent reliable with these three loads as well as a magazine of M855/SS109 (green-tip) military ball ammunition. The accompanying chart reflects the test results.

From a shooter’s perspective, the Springfield Saint was a lot of fun. I easily engaged 10-inch steel targets out to 300 yards using the Aimpoint PRO and 3X-C magnifier. My 50-yard groups were less than 0.5 inches wide, and the magnifier enabled me to use a bullseye. I installed a Leupold 2.5-8x36mm Mark 4 MR/T scope for the 100-yard testing. At that range, my five-shot groups were all under an inch. I even reached out and managed three hits out of five attempts on a 14-inch steel plate at 400 yards. 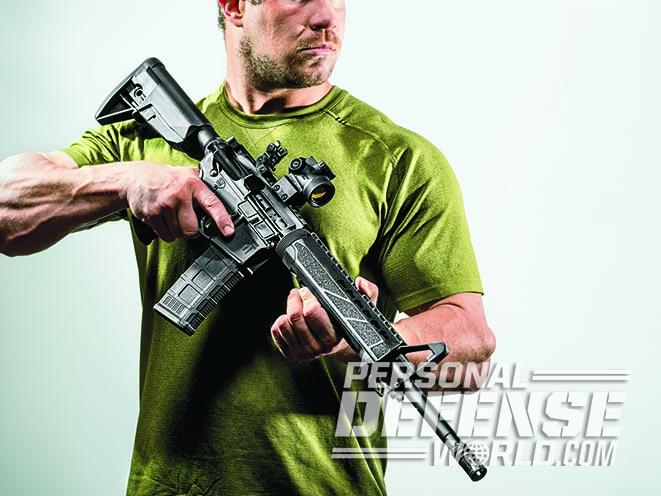 I contacted Chad Dyer at Springfield Armory about where the company was headed with the Defend Your Legacy program. I specifically asked if a 300 Blackout or .308 Winchester Saint might be in the future. Now, I will admit that I didn’t expect a direct answer, and I didn’t get one! But Chad did say that “much more is being developed, not just with the Saint, and 2017 will be a big year for Springfield Armory.” I guess we will have to wait until the 2017 SHOT Show to see what is next.

Speaking of the Defend Your Legacy program, something on the website that caught my attention: “A legacy is defined by choices, and only limited by the ability to defend it!” This a strong statement that leaves little room for compromise. Springfield Armory has indeed started a new chapter in the life of the company, and it is far more than “just another AR.” I look forward to seeing where this new initiative takes the company and the firearms industry as a whole. In the meantime, I think I will hit the range tomorrow with the Springfield Saint rifle in hand. There are some steel plates that need some attention.

How to Avoid Getting Lost in the Wilderness