The Survival Gun: What’s Best for Your Apocalypse Arsenal?

The problem in stereotyped thinking about survival is the belief that survival situations ought to involve a great deal of improvising. Almost certainly, there will be unanticipated circumstances that will force you to improvise. But good planning can confine these to non-critical areas that may involve your comfort but not your safety. If you run out of matches, you can make a fire by at least a dozen other means. But if you are attacked by a band of looters or set upon by feral dogs and are inadequately armed, it could cost you your life. Do not skimp on your selection of a survival gun. I am going to suggest that your survival battery include two separate categories of guns: defense and working. Neither should be expected to do double-duty.

Although you may plan to reload extensively, you will probably want to lay in a substantial supply of factory ammo. It has a better shelf life than its components. And it will be more valuable as an item of trade if you find that you have more than you need. 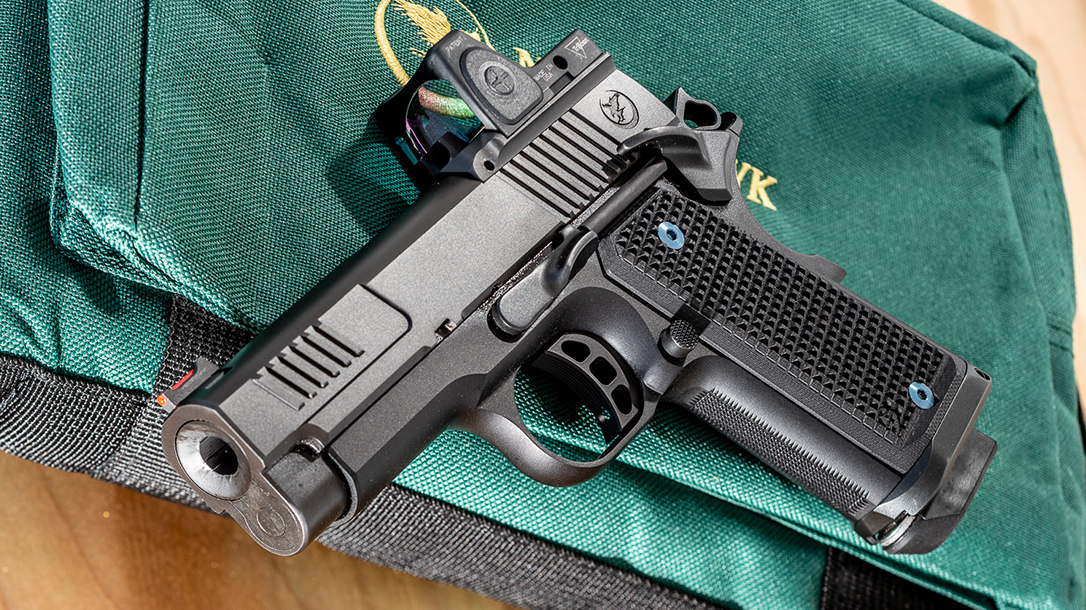 VIDEO: The Nighthawk Counselor Is the Ferrari of Concealable Pistols

All of your scoped rifles should also have a good set of iron sights. Quick detachable mounts are worth considering, despite their higher cost. Ease of repair should also be one of your prime criteria. Each gun in your battery ought to have its own separately packaged kit of spare parts.

Except in very unusual circumstances, accurate, reliable center fire rifles in the .270, .308 or .30-06 power range will be the most essential items in your working battery. They will put more meat on the table per ounce of ammunition expended than any other gun. They will serve—with proper ammunition—for a wide range of uses from pest control to protections from large animals. There are better choices for either extremes, of course, and if you need them, by all means include them in your plans.

A shotgun is more pedestrian in terms of the ammunition-to-food ratio, but there are times when nothing else can be relied upon to fill the pot. At least one good 12-gauge, open-choke scattergun should figure in your plans.

A handgun is perhaps less than essential as a survival gun. It can be an efficient means of finishing wounded game without excessive meat spoilage. It is more practical than game rifle sub-loads for taking rabbits, grouse, and the like when you’re hunting larger animals. If you choose a rimfire for this purpose, several of the pocket auto pistols offer all the accuracy you can use and are convenient to carry. Among the center fires, revolvers make better working guns. Not only because they preserve their brass for reloading, but also because you can have several types of loads quickly available. This includes from shot to mild wadcutters to full power by progressive loading of the chambers.

Ours is a social order in which disturbances no more serious than a citywide power failure or a “peaceful” demonstration frequently erupts into a riot of such proportions that the National Guard is required to quell it. What we might expect in the wake of a monetary collapse, nuclear attack, weather disaster, or terrorist attack, I leave to your imagination.

I realize that most readers have some sort of firearm around the house but the level of security called for in this context requires more than a casual selection of sporting arms. Defending your life is a competitive activity and you cannot expect to win if either your attitude or your equipment is inferior to that of your opponent. I recommend a small battery of specialized defensive arms, each designed to cope with a specific type of tactical situation.

Although a poor choice for urban home defense because of its excessive penetration and somewhat awkward handling in close quarters, a modern semi-automatic sporting rifle should be regarded as essential protection at a rural retreat. Neither pistols nor shotguns have sufficient range, in most circumstances. Sporting rifles usually have limited magazine capacities. They’re also not designed for either the volume of fire or the abuse to which they are apt to be subjected in even a brief firefight. City dwellers who’ve never been under fire often remark that an attack launched from several hundred yards away isn’t dangerous; or, B) that there would be plenty of time to escape and hide.

Even if the first contention were true, determined attackers seldom remain at long range if they do not encounter effective return fire. And running away might not be an option allowed by your attackers.

Probably the best single choice for this purpose would be one of the better .30 caliber rifles chambered for the 7.62 NATO (.308 Winchester) cartridge. As a backup, one of the 5.56 semiauto rifles should work out well. The .223 cartridge is readily obtainable in quantity. In good rifles it offers excellent accuracy and reasonable stopping power to perhaps 250 yards. Recoil is light, and, consequently, the gun made to fire it can be quite compact and light.

If you’re not already a skilled combat pistol shooter, becoming one should rank high on your list of survival preparations. Your defense pistol is the one arm that you can have with you at all time, even when bringing in a load of firewood or working in the garden. It’s a tool that should be chosen carefully, learned with extraordinary care, and carried always; when needed, it’s apt to be needed emphatically and quickly.

Controversy over the revolver vs. the auto pistol has provided interesting reading over the years. For our purposes, that discussion is somewhat specious. For survival gun use, revolvers have a slight edge. They save their brass for reloading instead of flinging it into the nearest underbrush. Also, they are capable of using more powerful ammunition for hunting or protection against large animals than most autopistols.

For defense, I believe that the Colt .45 auto has no peer among handguns. It is adequately powerful, acceptably accurate, and reliable in the extreme. Learning to shoot it well is much easier than gaining similar competence with a revolver. It is far less likely to malfunction because of hard usage or lack of routine maintenance. Further, should repairs become necessary, they can easily be accomplished from a small spare-parts kit, usually without tools. Whereas a revolver requires an expert gunsmith and fairly extensive equipment. Finally, the .45 auto is capable of sustained rapid fire, since it can be reloaded quickly with spare magazines.

If you are faced with attackers breaking into your dwelling, nothing else is as effective as a 12-gauge repeating shotgun. Although any size shot will do across a room, I greatly prefer the 12-gauge #4 buckshot load for defense under a wide variety of circumstances. Almost all shotguns are slow and clumsy to reload. Therefore, you should choose a model with a large magazine capacity. Do some experimenting with various models and choose the one that fits you best.