For this “Custom Challenge,” we sent David Teves from MAD Custom Coating two FN guns: An 9mm 509 pistol and a 12-gauge SLP Tactical shotgun. Our only instruction: “Do whatever you feel like.”

You can win one of two FN American guns customized by MAD Custom Coating. A 9mm 509 pistol and a 12-gauge SLP Tactical shotgun are both up for grabs. Before you learn how to win, let’s go back to the beginning.

Cerakote is only as strong as the applicator. I have heard this from multiple people, in various forms, since I started researching the firearm coatings industry. Talking to David Teves from MAD Custom Coating only sharpened my understanding of this concept.

But first, a little backstory. Teves’ father started the FAH Group in 1996, a company providing self-defense training with firearms, edged weapons and hand-to-hand combat in the private sector. In 2000, after the USS Cole bombing, the government reached out to FAH and the training group soon had contracts around the world, providing anti-terrorism/force-protection training to U.S. military personnel.

During this time, Teves worked with his father, instructing civilian and police classes. He also trained alongside elite military groups until moving to California to become a police officer, first in Long Beach, then up to Lakewood, Wash., where he planned to take over a portion of the training business.

Many of these training environments, especially those conducted in harsh conditions around the corrosive properties of saltwater, are hard on weapons, not to mention the physical impact of the training itself. The FAH Group trainers found themselves in possession of an armory full of well functioning but beat-up guns, many of which had lost large portions of their factory coatings, leaving them susceptible to the elements.

During this time, Teves’ brother-in-law and his father’s right-hand man in the training business, Monty Simao, was experimenting with various firearm coatings. After some testing, it was determined that Cerakote not only made the used equipment look brand new, but that it also provided superior protection over the factory-produced coatings.

Seeing an opportunity, Teves, alongside Simao, spearheaded the Cerakote coatings arm of the company, which is devoted to developing the best application process. Over the years, MAD Custom Coating expanded, first offering services to manufacturers and then to the public in 2010.

According to Teves, MAD Custom Coating has developed a proprietary mixing and application process that produces a stronger Cerakote finish than any competitor in the market. How? Well, unfortunately he wouldn’t tell me. However, years ago, after refining their process, Teves said they sent samples to Cerakote for testing and evaluation. Cerakote stated that the samples sent by MAD were indeed stronger than their test samples. Why? Science, I suppose. Or maybe magic. Who cares? MAD Custom Coating was started out of a need to apply a coating that would take extreme punishment, and in this the company has succeeded.

But in a coatings industry where everyone claims to be the best and most innovative, Teves is aware of his shortfalls.

“There are companies out there that do things better than us,” Tevas said. “Their coatings might not be as strong as ours, but there are guys out there in the industry who are way more creative than us that come up with the coolest patterns and themes. That has never been a strong suit of ours.” 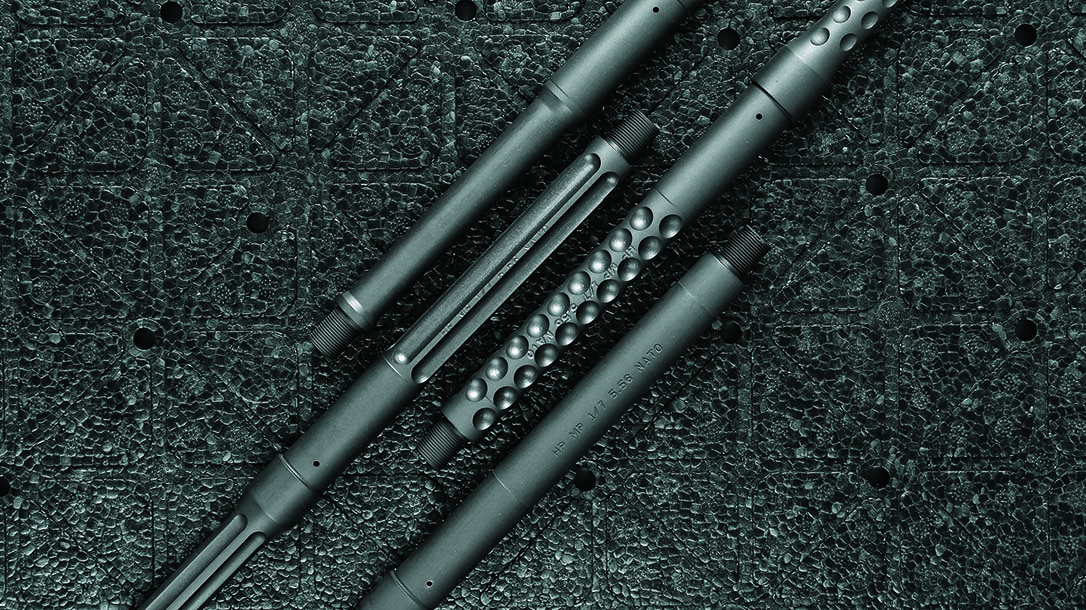 Because of this, Tevas has streamlined the colors and patterns offered on his website and doesn’t really market to people who are looking for “something crazy and wild.” In regards to customers’ guns, he would like them to “just tell me what you want,” he told me, laughing.

As we talked about the creative process, I brought up the popularity of “distressed” coatings in the industry. Teves had an interesting insight into why this has become so popular.

“Because Cerakote is difficult to apply, you can cover up a ton of mistakes if you distress it,” he explained. “So guys are doing full-blown camo patterns and then distressing the pattern because that gets rid of a lot of your hard lines.”

But doing this can cause other problems. Because the distressing process removes a portion of the coating—which is generally applied to be about 0.001 inches thick, about the width of a human hair—this process could lead to edges and corners being sanded down to bare metal, leaving these parts of the firearm completely unprotected. But it takes a trained and experienced eye to see this in just a photograph.

“These guys would post a picture, and people would be raving about how cool it looked,” Tevas explained. “And I’m like, ‘Oh my gosh, there is bare metal everywhere.’”

Teves was sure to explain to me that because distressing is such a careful process, MAD takes extra care to make sure everything is correct. “We make sure that every gun that leaves here, whether it’s distressed or not, has full coverage inside and out on every part and that you are going to get the protection you need.”

MAD Custom Coating also offers a lifetime guarantee that is unique to the company. The company guarantees its work for the lifetime of the product.

“If you drop it on the ground or take a knife blade to it, you can scratch through it, it’s going to wear. However, it will never chip, crack, peel or flake,” he said.

Teves guarantees this and will re-coat any product for no charge if it ever happens.

Like applicators, colors are also not created equal. For example, orange Cerakote is not as strong as black. This has to do with the amount of raw material needed to create the color. In order to get certain brighter colors, it takes a lot more pigment added to the coating. Therefore, the strength of the coating will be weaker.

On the flip side of that, Cerakote now has an Elite Series of coatings with improved hardness, abrasion resistance and lubricity, all in a thinner application. According to Cerakote’s website, the company accomplished this by “developing an advanced resin technology that enables the incorporation of the highest-performance engineered ceramics.” 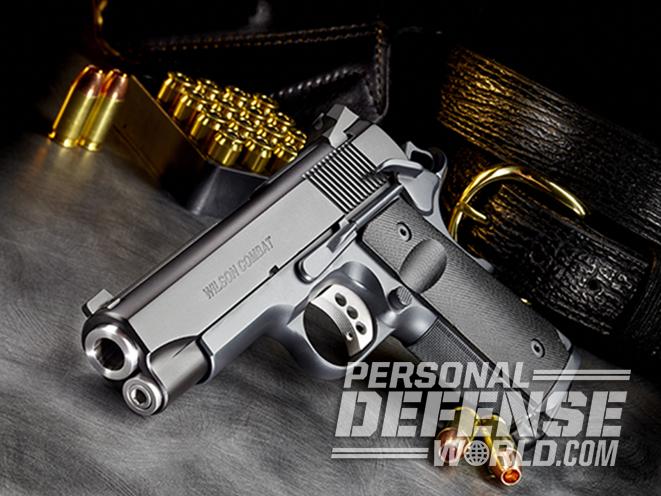 The problem for Teves was that this amazing, stronger, thinner, slicker series wasn’t offered in true black. MAD was known for its extremely popular MAD Black finish. So Teves worked with Cerakote to create a true black based on the Elite Series, available only at MAD, called MAD Black Plus.

MAD Black Plus is applied half as thick (0.0005 inches). It boasts twice the strength and twice the corrosion and abrasion resistance.

The coating also has vastly higher self-lubricating properties. It has the same friction coefficient as Teflon, allowing weapons to be run totally dry if needed. MAD Black Plus is a single application color only, however, due to the fact that nothing sticks to it.

MAD Black Plus is ideal for tight-tolerance guns and can be applied to almost any part you can think of without affecting tolerances, making it especially good for bolt carrier groups. In fact, MAD offers MAD-Black-Plus-coated bolt carrier groups through its website, which has lots of good information on the testing and application potential of this particular finish.

For this “Custom Challenge,” we sent Teves two FN guns: An 9mm FN 509 pistol and a 12-gauge SLP Tactical shotgun.

Teves decided on a MADLand Camo pattern, which uses standard MAD Black, Burnt Bronze and Shimmer Gold. It looks like silver with a hint of gold thrown in.

I asked Teves about the layering process. He told me that they don’t technically layer like I was assuming (base color, second color, etc.), and that how they do it is part of MAD’s super-secret G-14 Classified procedure, but you get the idea.

Now these two particular guns are up for grabs as part of our “Custom Challenge” giveaway. To get an idea of the cost breakdown, Teves explained that getting a handgun in three-color MADLand Camo, including camo on the slide and frame and a solid color on the smaller parts, costs $400, plus $60 for completely disassembly and reassembly. To coat a shotgun in three-color MADLand Camo, with camo on large surfaces only, the price would be $525, with disassembly and reassembly coming in at $90.

Teves told me his company generally has a six- to eight-week turnaround time for individual jobs. This is due, in part, to the fact that MAD does a lot of coating work for Leupold, Leatherman, Trayvax, V Seven and a number of other companies that keep MAD’s three full-time coaters busy. If you are looking for a little faster turnaround, Teves recommends that customers do the disassembly and assembly work themselves if possible. This will also save the cost of MAD Custom Coating doing it.

On to the important part. ENTER HERE to win of the two custom FNs: BallisticMag.com.

To learn more about MAD Custom Coating and get started on your own custom-coated firearms, check out MADcustomcoating.com.

To get your copy of the spring 2018 issue of Ballistic Magazine, please visit OutdoorGroupStore.com.