The German-made Korth NXR revolver chambered in .44 Rem Magnum (.44 Mag) immediately attracts attention with its unique aesthetics. In fact, it shocks the visual senses. You know it’s a revolver — it just screams different. 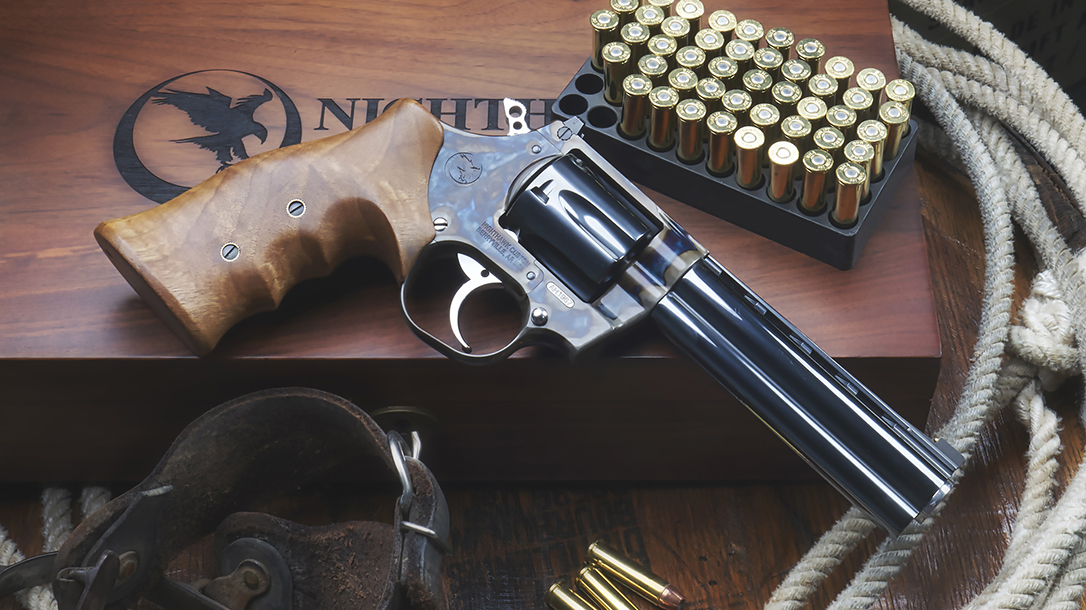 Firstly, there is the large metal frame covered in DLC (Diamond Like Coating) sporting the Turkish Walnut grips. The seam between the two grip halves are difficult to see. This is typical of the craftsmanship found on the Korth NXR. The grips are not merely aesthetic. Their design makes shooting full-house .44 Mag loads more manageable.

The Korth NXR evaluated herein features a 6-inch barrel (4-inch model also available) surrounded by vented barrel housing. The NXR has integral accessory rail machined under the barrel, which shooters can use for lights and/or lasers. We certainly took liberties with it in this build.

Korth also sends a detachable weight if end user wants to install it; it beefs up the 55.3 ounces of metal/wood that already make up the NXR. This weight is more applicable for competition purposes. More rails are present over the cylinder and barrel. Anything thought as worthy to mount on a handgun can be accommodated. This is a revolver with flair.

The Korth NRX in .44 Mag and Nighthawk’s Help

Korth revolvers are accessible in the U.S. via Nighthawk Custom. Nighthawk Custom and Korth established a partnership linking premier firearm manufacturers from both sides of the Atlantic. The collaboration brings a new standard of revolvers — like the NXR and the Super Sport — to the American market. It’s sure to change the mindset of many shooters.

Korth’s approach to producing a weapon is similar to that of Nighthawk Custom: One gun, one gunsmith. The commensurate price tag for the NXR reflects this. NXR metal and wood fit and finish is impeccable. Meanwhile, the smoothness of operation is something to behold. The cylinder glides in both double action and single action manipulation. Double-action trigger pull measured 7.5 pounds, while single action came in at 3.2 pounds.

Adjustable iron sights are present with blacked-out notch rear sight. The ramped front sight is a serrated black blade featuring dual removable side panels. The NXR’s cylinder release lever is located just to the left of the hammer, compared to our more typical frame-mounted method. This placement is a Korth hallmark. The design and positioning of the cylinder release allows shooters to open the cylinder without breaking their grip on the gun. The Korth NXR might be a revolver, but it has features worthy of the 21st Century.

For this particular article, we decided to take advantage of the Korth top and bottom rails to explore various aftermarket sighting systems. We went over-the-top we things, because why not?

While certainly nothing wrong with the Korth iron sights, an opportunity to handle a revolver like the Korth NXR only comes around so often and wanted to maximize my time with it. Having said that, it was no problem smacking steel silhouette targets at 100 yards with the NXR’s iron sights.

There are many fine factory loads existing for the 44 Mag from Black Hills Ammunition, Winchester and Hornady — a plethora of bullets exist ranging from 180 grain up to 300 grains and beyond. Black Hills 240 & 300 grain JHP, Winchester 210 grain Silvertip & 250 grain PTHP and Hornady 300 grain XTP are excellent examples of .44 Mag ammo flexibility.

The 6-inch NXR barrel produced 1,200-plus fps with 240 grain loads. Accuracy was more than acceptable when combined with the 2.5-8x Crimson Trace Brushline Pro Scope, with groups averaging 2.5 inches at 50 yards.

Eye of the Beholder

Fellow shooters at the range were drawn to the Korth NXR aesthetics and impressed by its performance off the bench and other field tests. I evaluated the Korth NXR with numerous trips to a private range equipped with falling plate racks, man popper steel plate targets, a dueling tree, and other training devices. We routinely shattered clay pigeons at 15 yards firing from the hip with the CMR-207G light/laser.

We regularly changed out the different Crimson Trace sighting devices during T&E. The Crimson Trace CTS 1250 proved a crowd favorite at the range. It not only contributed to the CDI factor (Chicks Dig It), but markedly improved the effectiveness of the revolver in rapid action drills involving plate racks and steel popper targets.

One of the biggest advantages I found using the CTS 1250 was that I could keep both eyes open when engaging targets. All the Crimson Trace items withstood the recoil dished out. The Korth NXR .44 Mag combined with the 2.5-8x Crimson Trace Brushline Pro optic featuring BDC reticle proved viable out to 120 yards, especially when combined with BOG tripod; that’s in large part due to the relatively flat .44 Mag ballistics.

Final Thoughts on the Korth NXR in .44 Mag

The NXR combined with walnut grips produces moderately felt recoil. While more than any 9mm or .45 ACP, the .44 Mag Korth would not be labeled as harsh or severe in the least. Though it’s no longer the king in terms of pure power, the .44 Mag is the established benchmark for handgun hunting cartridges. Sure the .454 Casual, .475 Linebaugh, .480 Ruger, .50 AE, and now the .500 S&W all surpass it terms of delivered payload. However, they all pay homage to the .44 Mag by comparing themselves to it. The .44 Mag combined with today’s modern bullets represents what most hunters can stand in terms of power/lethality and still shoot well … including myself.

The Korth NXR in .44 Mag is a custom revolver designed to excel. The ability to mount any red dot, magnified optic, light and/or laser combined with reliable, simple functioning and one-shot stopping power is a premium. We went a little over the top with it, and the experience was incredible. For even more info, please visit NighthawkCustom.com.