Korth Mongoose: A German Revolver Built Like a Nighthawk Custom 1911

by Frank Melloni
in Guns, Handguns
0

The Athlon Outdoors Rendezvous media event is typically my only exposure to uber high-end firearms, so I try to never miss one with 2021 being no exception. These products are so lavish that the manufacturers make us wear gloves as my filthy writer’s mitts are unworthy of mere contact with such a product. Ok, maybe I made the glove part up but at this year’s event I certainly saw my fill of the best equipment money can buy including a line of revolvers so exquisite that I considered raising a pinky when I shot it. The Nighthawk Korth Revolvers proved so satisfying in their performance that I ordered one “to-go” for some in-depth analysis in Ballistic magazine. 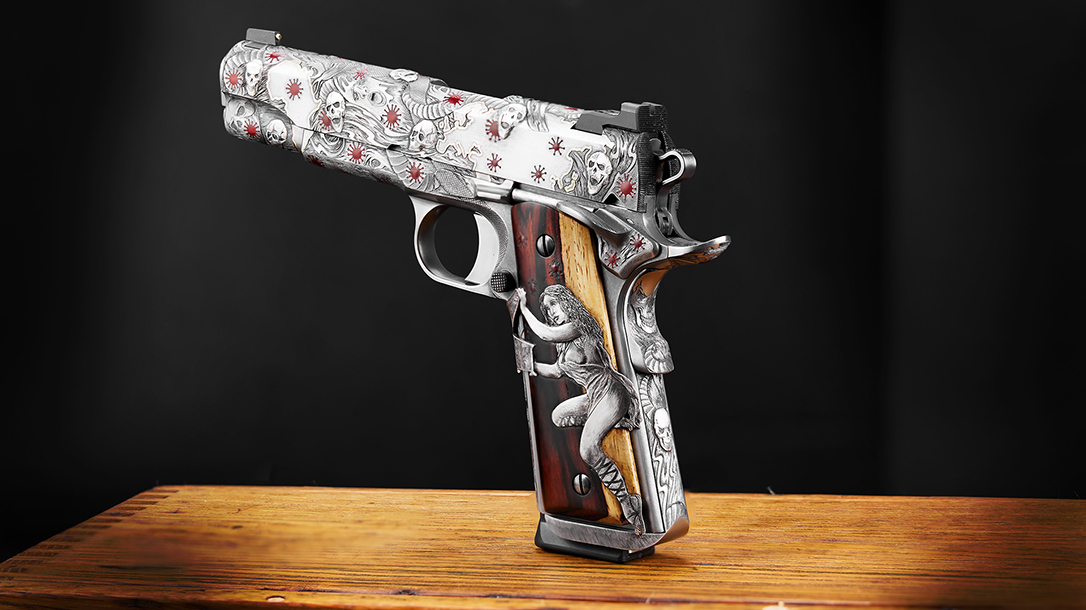 For those who have heard the Korth name previously, you might begin to think that Nighthawk started producing these iconic German revolvers under license, as it is equally capable of the same precision craftsmanship. However, you would be wrong as that is not the case. Instead, the Nighthawk Korth represents the union of two institutions that share a passion for tight tolerances and hand-fit parts. This partnership is responsible for bringing a series of amazing revolvers to the American market. Just like Nighthawk’s all-American 1911s, the German revolvers are built by one solemn gunsmith from start to finish, and it only takes one press of the trigger to understand what that means to the end-user.

After a few weeks, the gun showed up at my local FFL, and I had a bit of a dilemma on my hands. You see, the gun arrived at the absolute worst time, as the Bentley was out being detailed and all four of my Lamborghinis were in the performance shop too (this happens all the time). Luckily, I keep a Hyundai Accent in the driveway for situations like this and I promptly headed out to pry it away from the boys before emotional attachments developed. The gun that arrived was the 4-inch version of the Mongoose, which ironically is the California-approved model as well, and I couldn’t get it home fast enough so that I could fondle it in private.

Once I had it on my bench, I was able to measure things that I wasn’t able to in the field that previous October, like trigger weight. After ensuring the gun was empty, I pressed the trigger with a Lyman Digital Trigger Scale in both double and single-action modes. With the hammer cocked I measured a repeatable 3.3-pound break that had zero creep or overtravel. With the hammer at rest, the double-action weight was only 8.5 pounds and took the exact same amount of force throughout the entire trigger stroke. This refinement is the byproduct of a roller-style trigger mechanism. This approach adds quite a bit more work to the manufacturing process but is easily justified once you feel the finished product.

Aside from the trigger pull, there weren’t many other weights or measurements that I was interested in obtaining, so I just took a few minutes to look over some of the features that I didn’t get to appreciate during our previous, brief encounter. This time I realized that the black finish was Nighthawk’s signature DLC coating and not everyday Cerakote. This finish has a natural lubricity to it and, in my opinion, is less porous and holds up better. During this time, I also noticed that the ejector rod sits inside of the barrel shroud, protecting it from snagging during reholstering or other potentially hazardous actions. Aside from that, it was just a good, clean revolver that was destined to be King of the range, not Queen of the safe. With that being said, I set out to shoot this thing some more.

I took the Korth to my fancy club in the Hamptons and set up a 15-yard shooting position for a little group therapy. Included with my test kit was what I consider to be the neatest feature of this gun, a clip-less 9mm conversion cylinder. With the press of a button, one can remove the .357/.38 Special cylinder and replace it with one that could fire the less expensive 9mm Luger. Knowing this beforehand, I brought out a sample for each cartridge to run the gun to its fullest potential and to also get an idea on point of impact shift from cartridge to cartridge. Of these, there was Federal’s new Punch 120-grain civilian specific .38 Special +P, Federal’s 124-grain poly-coated Syntech 9mm Luger and Black Hills 125-grain Jacket Hollow Point .357 Magnum.

I started with the latter under the premise of “go big or go home.” I also figured I’d send the hardest charging round downrange while my wrists were at their freshest. I make it sound awful but, in reality, there isn’t much to shooting .357, especially through a well-balanced gun like the Mongoose. Groups weren’t too bad with almost everything beating the two-inch mark, landing exactly where I was aiming.

Moving over to the .38 Special, the gun became even more fun to shoot as the resulting recoil wasn’t a far cry from .22 LR. The gun’s accuracy also excelled with this load with the smallest group measuring just 1.09 inches and shared a POI with the magnum load too. After swapping over to the 9mm cylinder, we saw accuracy that was right on par with its rimmed counterparts, however impacts were two to three inches lower than the other rounds. Being that the sights are adjustable, I clicked them up a bit and struck a balance where the .357/38 rounds would land an inch or so high and allow the 9mm to land just an inch or so low.

One of my favorite aspects of the Mongoose is that it makes use of aesthetically pleasing components that serve functionality at its core—take for instance the 18-karat gold front sight. Yes, it’s cool to say that your sight is made of gold, but the truth is that gold doesn’t tarnish and is brighter and more visible than common brass. The DLC coating is smooth and lustrous but at heart it is one of the best moisture inhibitors. Lastly, rubber Hogue grips are exceptionally easy on the eyes but are far easier on your palms when you plan to shoot all day long. So yes, it’s a fancy-looking gun but it is made for you to enjoy, not just admire.

During my 300-round range day, I got my money’s worth as not only did the gun look and shoot amazingly but all of lesser operations were trouble-free as well. I enjoyed the effortless extraction of not only the .357 and .38 Special cases but the 9mm Lugers too. The mechanics behind that cylinder are impressive by themselves, as there are more than 40 tiny little parts that make it clip-less. The front sight glowed like a beacon in the night and any adjustments that I made to the rear sight were met with deeply tactile clicks. Running the Mongoose in double-action was like no other revolver that I had shot before and even rivaled some semi-autos in the department of ease. Overall, it was just a fun gun to shoot, and being able to spend more time with it was one of the highlights of my year.

After getting the gun back home, I pulled the cylinder and gave it a thorough cleaning. Being able to separate it from the frame made it that much easier to scrub, although it didn’t take a whole lot of effort to make it shine again. A few wipes with everyday CLP were all that was needed to remove the little bit of carbon that was left clinging on, and soon we were ready to put it back together again. As removing the cylinder was toolless, so was reinstalling it. One might argue the hardest part of the whole process is putting the gun down, as it quickly becomes one with your hand. Harder still was having to ship it back to Nighthawk after the test was complete. For more information, visit nighthawkcustom.com.

This article originally ran in the February-March 2022 issue of Ballistic magazine. Get your copy today at OutdoorGroupStore.com.