And just like that, 2021 is off and running. Leave it to KelTec to reinvent the wheel in ways that are either brilliant or totally unnecessary; but we think its new offering falls under the former. KelTec just introduced its all-new P50 pistol in 5.7x28mm and it’s interesting, to say the very least. 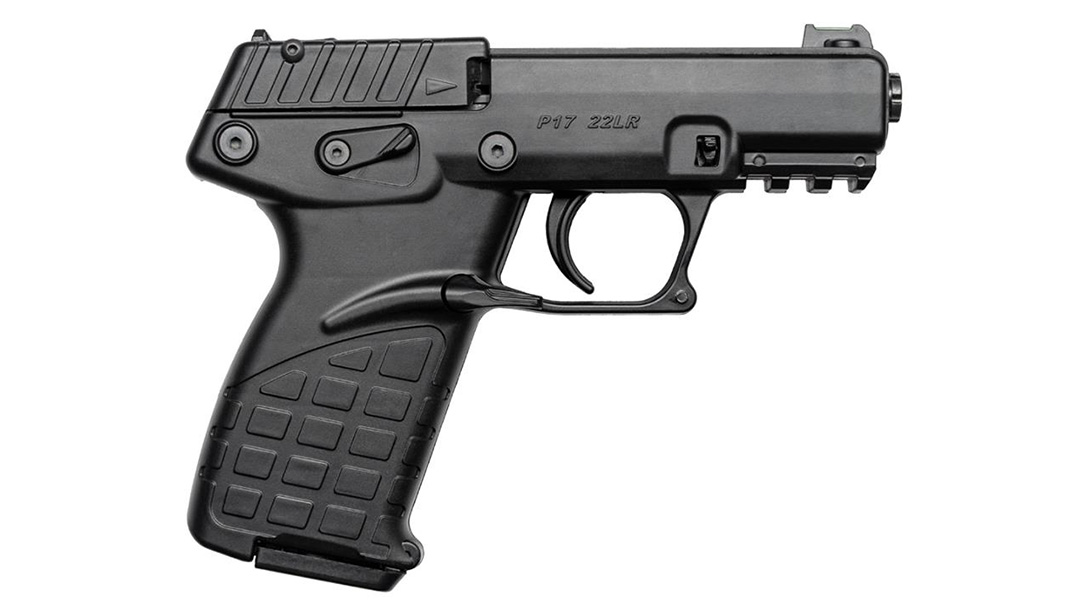 If you’re not sure exactly what you’re looking at, good—KelTec has a knack for that. Historically, the company thinks way outside the box, as evidenced by releases like last year’s integrally suppressed, folding Sub 2000 carbine or 2019’s CP33 pistol. KelTec certainly stretched the limits of creativity with the all-new KP50.

Firstly, the P50 features a 50-round mag capacity; that number alone draws attention. But how KelTec incorporated that capacity is even more jaw-dropping. The company managed to keep the pistol relatively compact by allowing shooters to lift the barrel up and slide the magazine in. Yes, you’re probably understanding that correctly. See the image here:

Then comes the actual magazine itself. So KelTec based the P50 platform on the FN P90 50-round magazine. The company says, “This beast comes with two of them” — so that’s sure to make shooters happy.

Another feature we kind of breezed past is the caliber. KelTec chambered the new pistol in 5.7x28mm, which has seen a bit of resurgence as of late. Ruger spiced up the 5.7x28mm market in early 2020 with the release of the Ruger-57, an obvious competitor to the long-unchallenged FN Five seveN. Well, now you can throw the P50 into the mix. We’re interested to see what kind of velocity and accuracy the P50 can achieve.

The upper receiver contains the ejection port, that ejects the rounds at a 45-degree angle. At the rear of the upper receiver is the rear charging handle for chambering a round. While firing, the P50 has smooth bolt movement, thanks to the dual recoil springs.

Additionally, the P50 features a threaded barrel for use with a suppressor and comes with a thread protector. The ability to affix a suppressor, coupled with a picatinny rail for popular optics, makes it great for home defense. A second 6-slot picatinny rail runs along the bottom of the pistol, just forward of the trigger guard.

Just above the pistol grip is a QD sling swivel socket allowing for a sling. With the absence of a dedicated pistol brace, the sling helps stabilize the pistol by pushing out against it.

Lastly is MSRP, which comes in at $995. Meanwhile, KelTec says the pistol begins shipping in the first quarter of 2021. That’s all we have for now, but you can believe we’ll be first in line for a test. For even more info, please visit KelTecWeapons.com.