by Jay Langston
in Guns, Handguns
0

It was T-Minus 24 hours and counting until the opener of spring turkey season. The morning was like most others. I got up about 30 minutes before sunrise to let my two Labrador retrievers out for their morning run. As I stood on the front porch with the day’s first cup of coffee and watched the dogs circle the front pasture, a loud tom’s gobble rattled my eardrums from just beyond shotgun range. A mature gobbler was roosted with a half dozen hens just behind my garage. The first gobble I had heard near my house in almost a year gave me a smile and bode well for tomorrow’s opener. Opening day of Tennessee’s spring turkey season would have a twist this year. I would be hunting with a new shotgun of sorts — Kauger Arms’ .410 Tomahawk pistol. 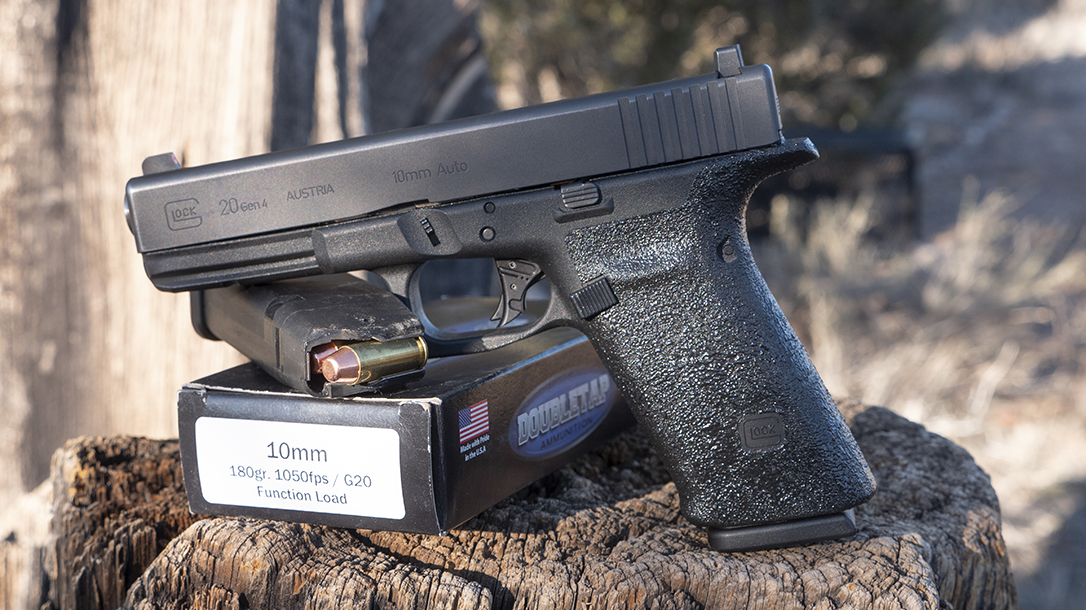 Curious as to what the small flock of turkeys would do when they descended their roost, I gave a short whistle and called the dogs back to the house. The tom responded with a lusty shock gobble. The dogs back inside, I took a seat on the front porch and waited for the birds to fly down. They pitched down on the neighbor’s farm just across the fence, but it didn’t take long until they assembled around the gobbling tom and squirted under the fence. Their sunrise march took them across a 10-acre hay field toward the south and deeper into my farm. If my luck held, the tom would be close at hand come morning.

Throughout the morning I occasionally heard the tom gobble to attract more hens about a half mile from my house. Busy with routine equipment maintenance that morning, I had to drive the half mile to my barn to retrieve another piece of field equipment at noon. In the field next to the barn, the tom strutted in all his glory for a full dozen hens that had gathered to watch the show. The flock eased off into the brush while I backed up to a disc harrow, which was next on the maintenance list. Back at my garage a few minutes later, I began hammering on a part of the disc that needed some encouragement to release a rusty part. The tom shock gobbled again to the noise, leaving me wondering if he would be worn out and tight-lipped the following morning or still fired up and talkative.

The Kauger Arms Tomahawk is a rather revolutionary .410 handgun designed specifically for the turkey hunter. Spanning the past four decades, I’ve spent a tremendous amount of time shooting turkey guns. At a point several years ago, I counted up that I had fired more than 11,000 magnum turkey loads pattern testing guns and chokes. Along the way, I’ve been blessed to hunt wild turkeys in a couple dozen states with every commercially-loaded shotgun gauge, muzzleloading shotguns and rifles, as well as centerfire rifles and bows. I’ve been involved in the sport long enough to witness several trends.

A couple of the trends popular these days is hunting with ever decreasing shotgun gauges, as well as shotgun loads with tungsten shot. The idea behind hunting with smaller gauges is to increase the challenge by their limited range. It doesn’t hurt that smaller gauges weigh less, a benefit for hunters carrying the gun. At the same time, tungsten shot has increased the effective killing range by about 25 percent. Older lead loads’ maximum range hovered around 40 yards from a tight-choked 12 gauge, but today’s new tungsten loads increase that kill range to about 50 to 55 yards.

Heretofore, a 20 gauge ran out of effective pattern density and pellet energy at about 30 yards, and the diminutive .410 had a maximum effective range of 20 yards. Loaded with dense tungsten shot, like Federal’s TSS, a 20 gauge can handily kill birds out to 40 yards and a little beyond, and the .410 is deadly for an ethical head shot on a tough old tom out to 30 yards and farther.

How the Kauger Arms .410 Tomahawk Fares

My previous experience with turkeys and .410s included Thompson/Center single-shot shotguns and pistols. The choke technology at the time limited these guns to shots between 15 and 18 yards to kill effectively. The Kauger Arms .410 Tomahawk essentially doubles the effective killing range for the little shotgun round.

The Tomahawk gets high marks as a turkey gun from a combination of several features. Made one at a time at the Kauger Arms Custom Shop, each Tomahawk is made of custom-grade components and comprises a 16.125-inch, smooth-bore .410 barrel and a proprietary Kauger Arms bolt-action with spiral-fluted bolt. Reminiscent of a Remington 700 action, the top is threaded for a M700 scope base. It comes from the factory with a mounted Burris FastFire reflex optic with a 4-MOA red dot.

The extra-full choke is critical to getting the Tomahawk to shoot such dense patterns. Because the Tomahawk was developed for turkey hunting, Kauger Arms matched the handgun with a 3.06-inch JEBS Precision screw-in extended choke tube. The choke provides 40 points of constriction, measuring 0.422-inch on the bore side and narrows down to 0.382 at the muzzle.

To light the fire on the Tomahawk, Kauger uses a TriggerTech trigger. The safety is also a Remington 700 style. This pistol is fed from a HS Precision three-round removable magazine. The stock is a 3D scanned reproduction of a hand-carved stock that Kauger Arms molded to perfectly fit your hand. It has a forward sling swivel stud, which I utilized and tied the other free end of the sling to the pistol grip for ease of transport.

The Kauger action is extra smooth when chambering and extracting a round. This action is the same the company uses on their custom rifles, which belies the Tomahawk’s $1,298 price tag.

A few days before the opener when the Turkey Tomahawk arrived, I checked the Burris FastFire sight. It was dead on at 25 yards, centering an 11/16-ounce load of No. 6 lead shot from a Federal 3-inch shell. Next, I tacked up a large piece of paper to check pattern density. The Federal load put 44 pellets in a 10-inch circle, and five inside a 3-inch circle. The larger circle represents the distance from the top of mature tom’s noggin to his wattle when he stretches his neck trying to get a good look at something, and the smaller circle homes in on the pattern’s center density.

Switching to a 3-inch Remington load of No. 6 lead, it recorded 48 pellets in 10 inches, and seven inside of 3 inches.

New this year is Federal’s tungsten TSS .410 load — a 13/16-ounce load of No. 9 shot. The density and hardness of tungsten shot compared to lead is the secret to its success on game. Tungsten has a molecular density of 19.3 grams per cubic centimeter, whereas lead has a density of 11.34 grams per cc. Tungsten shot actually has a density less than pure tungsten owing to shot manufacturing constraints. I haven’t conducted a metallurgical analysis, but my guess is that it’s in the range of 17 grams per cc in density. Without belaboring the point, a No. 9 tungsten pellet weighs about as much as a No. 6 lead pellet. Given the same velocity, the smaller, harder pellet will penetrate deeper, too.

At 25 yards, the No. 9 TSS put 166 pellets inside of a 10-inch circle and 31 pellets inside of 3 inches. Compared to the other .410 loads, it’s easy to see how revolutionary this load is for the mini-bore shotgun.

As the sun dropped below the western horizon, I took a stroll back to the barn lot a half mile from the house to listen for turkeys to fly to roost. I heard multiple birds make the unmistakable flapping and cackling sound as they flew up. Fifteen minutes later in the waning light, I gave a barred owl’s hooting call and got a gobble in response. The tom was roosted another half mile south near an old Civil War-era cemetery. I had a plan.

An hour before sunrise on the opener, I finished my second cup of coffee and sat it on the front porch. Donning my turkey vest and the Tomahawk, I started the dew-soaked trek. When I got to the north end of the cemetery field, I paused to wait for the first gobble of the morning. Pinpointing his roost tree, I knew that he would pitch down toward the middle of the field and out of range of any shotgun. I decided to find a spot in the edge of some cedar scrub that was within range of the field road that ran through the middle of the field.

The tom flew down first, just barely discernible in the faint light. He gobbled almost non-stop at least a half dozen times a minute. As the light grew, hens started flying down and sailing from all points of the compass around the field, one sailing so close overhead I could see her eye and landing gear clearly. Fly-down completed, 13 hens gathered around the tom. I gave them a few minutes to settle their female bickering and picked out the yelps of the boss hen. I used a handmade mouth call carefully crafted by long-time hunting companion Roger Hook, and matched the old hen’s raspy calls. She didn’t like it one bit, and I kept on antagonizing her.

Finally she broke from the flock and started walking up the two-track path in my direction. The whole flock soon fell into line with the longbeard in tow. It took them about five minutes to saunter the 350 yards, but they were on course. Finally the tom strutted into range and I had to wait for him to separate from the hens. When he did, I clucked loudly on the mouth call and he stood erect. I already had the red dot on his wattles, the gun rested on my knee. At 35 yards, the bird went into a flopping pile.

Kauger Arms’ Tomahawk did its job, and I also look forward to trying it out on some spring squirrels, too. This is a high-quality rig that takes turkey hunting to its limits. Check one out if you’re ready for the challenge. For even more info, visit kaugerarms.com.