There’s a contract on your head, and the entire underworld wants you 10 toes up. Legendary assassin John Wick is at your six, revving the engine of his 1970 Chevy Chevelle SS. The passenger door is open, and the invite expires as soon as the blood dries on his No. 2 pencil. As you make your way to the car, British secret agent James Bond descends from the sky in a jetpack as he remotely controls his Aston Martin with his wristwatch. The car rolls up with a gorgeous woman in the passenger seat. 007 gives her an approving smirk as she exits the car, leaving the seat warm and the martinis chilled. You have exactly 10 seconds to decide who is your ride or die—not figuratively, literally. Who do you trust most when John Wick vs James Bond? 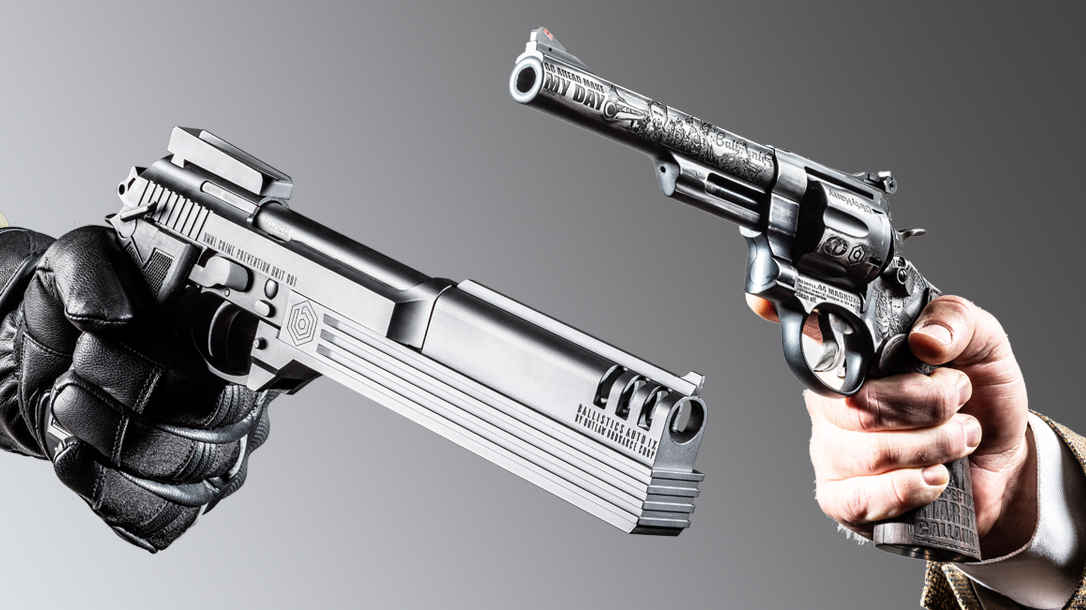 Tell Me About Your Family—Oh, Wait…

Bond and Wick are both orphans and widowers with no children. This makes for some pretty depressing small talk on the open road. Wick loved his wife, Helen, so much that he paid off his “blood-oath marker” with the Russian mob to be with her in her final days. She died of cancer not long after that, leaving John a beagle puppy named Daisy to care for. Unfortunately, Daisy was beaten and shot to death by a wealthy Russian mobster named Iosef Tarasov. Of course, this led to a shitstorm of epic proportions.

Bond’s wife, Tracy, was killed on their wedding day in a drive-by shooting. Bond never did care for a pet. But he slept with a woman named Pussy Galore, so we assume that he is a cat person. Ms. Galore was a competent henchwoman and one of the few “Bond Girls” who actually escaped death. The MI6 secret agent has had sex with more than 55 women, and 33 of them were murdered shortly afterward. To some, this might raise a few red flags. But, when you’re an international man of mystery, you never let feelings get in the way.

We all know that you should never let emotions influence how you fight. Plus, spouses always seem to be a weak link in spy movies. You gotta love ’em and leave ’em if you want to survive in this game. Hats off to Bond for “Keeping the British end up.”

Wick’s background is pretty vague, but we do know that he was raised by the Ruska Roma crime organization and later worked for the Tarasov family. Those are some pretty big names on that LinkedIn resumé. He also has “Fortis Fortuna Adiuvat” tattooed across his back, which is Latin for, “It is only the strong ones that the Goddess of Fortune comes to save.” That’s definitely way more hardcore than that Chinese kanji tattoo on your ankle, but hey, if you say it translates to “Lone Wolf,” then I believe you. Wick is a homegrown master assassin who has racked up a kill count of around 300. If you are keeping score, those aren’t rookie numbers. That is a buttload of dead bodies for only three movies.

When Bond wasn’t skiing in the French Alps or sleeping with more hot women (starting to get jealous here), he earned credentials in every assassin and spy skillset known to man. After running shit as a commander in the Royal Navy, he was hand selected by MI6 and earned the coveted “00” rating. That means this dude is straight-up “licensed to kill” by the British government. Some highlights from his resumé include underwater warfare expert, advanced commando training, HALO parachutist, special forces qualification, master of all weapons systems, and proficient to pilot any aircraft or submarine in existence. Last we checked, he has killed 597 bad guys in 26 movies. That’s about 22 funerals every time this dude steps onto the silver screen.

Bond might have all the cool-guy school credentials under his belt, but Wick grew up in the Russian mafia. You can’t substitute tea and crumpets with slitting your neighbor’s throat at age 9 because your “Uncle Viggo” didn’t like the smell of his breath. Bond may have attended the School of Hard Knocks, but Wick is the f***ing principal.

When it comes to social settings, these two are polar opposites. John Wick consistently keeps a low profile, hates large gatherings and pays for everything in untraceable gold coins. However, his taste in liquor is exquisite. His drink of choice is Blanton’s Bourbon, which can run about $400 a bottle for the good stuff. And when it comes to gadgets, Johnny plays no games. It’s all about the weapons of opportunity.

On the other end of the spectrum, James Bond drinks Vesper martinis (shaken, not stirred) and walks into any room with swagger and charm. Thanks to the British Secret Intelligence Service, he’s got an unlimited budget as well as the coolest spy gadgets ever built. Even Wick would be envious of Bond’s arsenal. His toolbox includes jetpacks, cigarette darts, dagger shoes, spiked umbrellas, ski-pole guns, X-ray glasses, folding sniper rifles and throwing knives, to name just a few.

While shark guns and personal hovercrafts are at the top of any man’s Christmas list, these crazy gadgets require lots of training. Plus, if your Moonraker laser gun misfires, you have a lot of explaining to do to the boss lady (and whoever’s face you just melted off). Wick keeps it simple. (If he can’t kill you with a pencil, is it really worth carrying?) This is all about personal taste. Look in your safe at home. If your AR-15 has more accessories than a Mars rover, then you might be a Bond guy.

Who Needs Friends When You Have Weapons?

There are only two people who are truly loyal to Wick: the concierge Charon and the crime-scene cleaner Charlie. Charon is the first face you see when entering the Continental, a five-star hotel strictly for assassins. He’s got class, style and a vast weapons collection that would make any gun enthusiast pee their pants. Then there’s Charlie, a professional cleaner who disposes of bodies and restores blood-soaked murder scenes to their original condition. He’s reliable, does A+ work and would definitely receive an outstanding Yelp review if “Murder Maids” were a category.

Bond, on the other hand, has the entire British Secret Intelligence Service on his side. His support team consists of “Q,” a gadgets and inventions guru and quite possibly the greatest small-arms expert and armorer in the world. He also has “M,” the head of MI6, and her secretary, the sexy and flirtatious Miss Moneypenny. In every city he steps into, he has a contact there to help facilitate his needs.

In the immortal words of Joseph Stalin (I can’t believe I am even quoting this turd), “I trust no one, not even myself.” Too many friends, too many contacts…eventually someone is going to turn on you, especially when they see that you own a jetpack. That’s just plain arrogant, and almost anybody would be jealous as hell. To survive in this game, you must be able to count your allies on a single, bloody hand.

Wick is all about American muscle, and he puts these beauties to the test! He drives a 1968 Dodge Charger, a 1969 Mustang GT, a 1970 Chevelle SS 454 LS6 and a 2011 Dodge Charger LD. While Bond has to rely on wit, class and charm to get the ladies, all Baba Yaga has to do is mash the pedal a few times and the panties start to drop.

Bond, however, is all about luxury super-mobiles. He drives the Aston Martin DB5, the Aston Martin DBS V12 and the Aston Martin V12 Vanquish. These British speed demons have been known to top out close to 200 mph and go from 0 to 60 in under 5 seconds. They are perfect getaway cars for when you have metal-mouth malefactors chasing after you or when you notice that another one of your 55 girlfriends has just died.

Look, as much as I like to go fast and listen to Wham!, I bleed red, white and blue. Nothing compares to the sound of an American muscle car lined up at a red light with its engine revving and a driver ready to burn 2 inches of rubber off the tires just to show up that Prius in the next lane over. It’s what we’ve done since 1776!

You Want A War Or Just Wanna Give Me A Gun?

When your nickname is “The Boogeyman,” you’d better be packing some kickass weapons. Wick’s go-to pistols are the Glock 26, an STI 2011, the Kimber Warrior and a Heckler & Koch P30L. Of course, there are numerous other firearms that have found their way into his hands, but I will let you go back through the three films and pick them out for yourself. In fact, calling out Wick’s firearms as he uses them before any of your friends do is a killer drinking game!

While most people instantly associate 007 with the Walther PPK, his original choice of firearm was the intimidating Beretta .25 automatic. OK, I made you laugh there. Not sure why one of the top agents in the world would carry such a girlie pistol, but I never graduated from international spy school, so I will just keep my comments to myself. Bond also rocked certain firearms for different missions. He even broke out Dirty Harry’s gun (Smith and Wesson’s Model 29 .44 magnum) in Live and Let Die. So, just because he digs the pocket rockets, doesn’t mean he won’t end your life with a hand cannon.

One of the biggest lies that I have been told in my life is, “It’s not the size of the boat, it’s the motion in the ocean.” Yeah, right. Nice try, ladies. Big guns equal big holes in people. I have seen a crackhead get shot 14 times with a .380 and still be able to run away. That’s not happening with a .45, my friends. Plus, Wick’s gun-handling skills are far superior to our British secret agent’s. Looks like all those precious range days at Taran Tactical have finally paid off.

007 is that highly trained operative you send in to seduce the gorgeous, blonde diplomat and then steal the nuclear launch codes on the way out. He can eliminate threats with poison blow darts across a crowded black-tie event, and then he will sip on a martini or play a $500 hand of baccarat as his victim lies there tits up. If you want it done discreetly and with class, Bond is your man.

But if you need to shoot 25 m*****f***ers in the face to save the world, then you might want to pick John Wick for your team. Except, if that is your mentality, the joke is actually on you since there is no “team.” Wick is in charge, and you will simply hide in the trunk in the fetal position until he has finished the job. Be nice, pay the man and go about your business.

So, if I were faced with the choice of John Wick vs James Bond, whose vehicle would I get into? While both men are more than qualified to save my ass, my gut tells me that John Wick is the man for the job. Bond’s tactics are definitely cunning and impressive, but as my grandmother used to tell me before our annual family reunion, “Sometimes, extreme violence is the answer.”

This article originally appeared in the Ballistic Magazine Feb/March 2021 issue. Subscription is available in print and digital editions at OutdoorGroupStore.com. Or call 1-800-284-5668, or email subscriptions@athlonmediagroup.com.