by Dan Silvers
in Lifestyle, Rides
0

Having grown up in northwestern Ohio since I was 5 years old, I have a unique prospective on the Jeep brand. Toledo is “Jeep Country.” We even have a Jeep parade every summer. 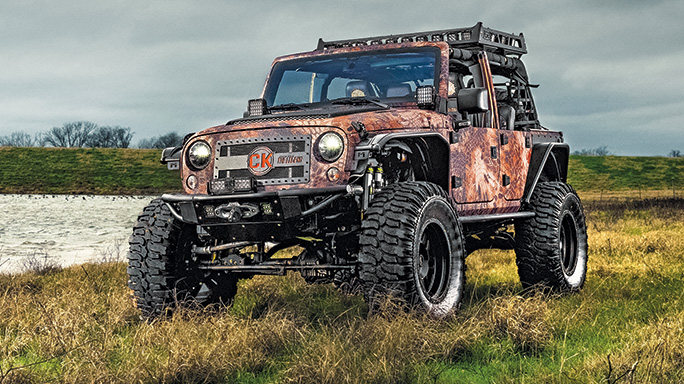 My personal Jeep journey starts in the late 1990s when I was in college at the University of Toledo. I accepted a job with Pinkerton Security but wasn’t quite sure where they’d station me. Needless to say, I was excited when I heard I was being assigned to the old Jeep Willys plant in Toledo—the same plant that pumped out more than 350,000 Jeeps in the 1940s for the U.S. and Allied troops in World War II. In grade school, we watched video footage of Jeeps rolling off the Willys-Overland assembly line and headed to the troops overseas.

Home of the Jeep Gladiator

I can still remember jumping over the aging assembly line in black shoes, polyester pants that breathed about as much as a contractor-grade garbage bag, and a “Flavor Flav” security clock hanging around my neck as I walked from station to station to make sure all was well in the plant. It was a job I’ll never forget. Sadly, by the 1990s, both the Willys plant (originally built in the early 1900s) and the Jeep brand had seen better days. Since WWII, Jeep changed owners about every 10 years. The mid-2000s finally saw a new plant built off I-75, and not long after that, Fiat purchased the Jeep and Chrysler brands to become Fiat Chrysler Automobiles, or FCA.

Those of us in Toledo were optimistic. Jeep is a major employer in northwestern Ohio. In many ways, Jeep’s success means Toledo’s success. When word of a new Jeep vehicle was being discussed behind closed doors, everyone in Toledo unified to urge FCA to make it in the birthplace of Jeep. Thankfully, they were successful, and now the Jeep Gladiator is proudly made there.

In simple terms, the Gladiator is a four-door Jeep Wrangler with a 5-plus-foot pickup bed at the rear. Jeep created it because many customers demanded a truck, but not a full-sized model. I’m a perfect example of the target market for this type of vehicle. I need something that can fit four to five adults, but I’d like the option to have a pickup truck at times to haul mulch, soil or a deer on opening day. However, get too much truck and parking can become an issue. Also, you can quickly become a full-time moving service for all your friends on Saturdays.

Jeep designed the Gladiator to compete for the growing market share in the midsize truck category with the Ford Ranger, Toyota Tacoma and Chevrolet Colorado, to name a few. The 3.6-liter V6 engine is similar in both the Gladiator and Wrangler (although a diesel engine is estimated to be ready at some point in 2020), and the interior and exterior (minus the pickup bed) are virtually identical. The Gladiator comes in Sport, Sport S, Overland and Rubicon variants.

Despite growing up in “Jeep Country,” I’ve never owned one. In fact, since 2007, my everyday driver has been a 2007 Toyota FJ Cruiser, now with nearly 300,000 miles on it. I chose the FJ for its size, interior headroom and Toyota’s reliability. But now that it’s time to find a new vehicle, I decided to test the Jeep Gladiator.

When the Overland model arrived at my house, I gave it a quick 360-degree examination. The first thing I noticed was the distinctive Jeep look. It has that classic boxy, off-road Wrangler look. Nothing felt cheap about its construction. Although similar to the Wrangler from the rear doors forward, the Gladiator has a longer wheelbase (the frame is nearly 2 feet longer), which allows for a more stable ride compared to the Wrangler. The seat height is also very empowering. It’s easy to see why the Jeep brand has such a loyal following. But let’s get to the details.

There are a lot of pros with the Gladiator. Like the Wrangler, it’s fully customizable thanks to a slew of OEM and aftermarket parts. I can’t think of any other vehicle that is as easily customized as the Jeep. The Gladiator and Wrangler are basically the AR-15s of the vehicle world. Want to get rid of the roof and doors? No problem. A different hood? Done. Want to add a winch, beefier tires or a lift kit? Go for it.

It’s also hard grasping the steering wheel of the Gladiator and not feeling the lineage of its WWII ancestor. No other car manufacturer can boast the lineage and popularity of Jeep. In fact, one of the big issues FCA faced with releasing a new vehicle under the Jeep brand was that the Wrangler sells as quickly as the company can make them.

Another pro relates to its towing capabilities. The Jeep Gladiator’s pickup bed allows for a level of versatility that the Wrangler could only achieve by adding a trailer. I also found the tailgate easy to open and close. The multiple tie-down connection points make it easy to strap down any goods you need to secure during transport. Since most of us aren’t dumping an entire pile of gravel into the bed of our pickups, the Jeep Gladiator’s bed capacity of 1,700 pounds is more than enough for a midsize truck.

The Wrangler never had a lot of storage space in the trunk, but by adding the bed to the Gladiator, that space was eliminated (unless you want your items out in the open). Knowing this, Jeep’s engineers built in some ingenious storage compartments under the rear seats and behind the seats as well. There is a decent amount of room under the rear seats for tools, emergency supplies or even a trusty rifle.

Finally, the Gladiator supports American workers. Although FCA is a multi-national corporation headquartered outside of the country, thousands of U.S. workers in Ohio and Michigan greatly benefit every time you buy a Gladiator. As long as the quality is there, I’ll support American workers whenever I can. The builders in Toledo even snuck in a little shout-out to Toledo with the “419” logo in back left section of the bed, reflecting the city’s area code.

I really hate the engine start/stop system on modern vehicles. This feature turns your vehicle off when you come to a complete stop while driving—most of the time. The engine starts back up when you depress the accelerator. It does lower a car’s emissions and improves the overall gas mileage. However, it also shortens your engine’s life (even though most makers say this isn’t the case). This feature can be temporarily overridden when you turn the vehicle on each time by depressing a button on the dash. However, it will reengage the next time you turn on the Gladiator.

Also, if you’re a perfectionist who wants a mirror-like paint job, this isn’t your vehicle. It’s especially noticeable on the darker colors. You’ll see a little bit of a wave pattern on the paint. This isn’t a deal-breaker for me, but I know some people might be upset with this if they are paying more than $50,000 for a vehicle.

The headroom represented the biggest fail for me, but being 6-foot-3, I have different issues than most when selecting a vehicle. Just ask my wife when I tried getting in a 2019 Chevy Camaro at a car rental place. It was like trying to shove a size-12 foot into a size-9 shoe.

My height became an issue when I pushed the seat back as far as it would go and reclined the back of the seat to the position that would be comfortable to me for driving. With the seat in this position, the back of my head hit the front edge of the plastic molding that is wrapped around the middle support beam of the Gladiator, which houses the speakers and main cabin light on all four models. I could see this being a real issue in an accident where my head could get thrown back into the headrest. If you’re of average height, you won’t have this issue.

I’ve seen others complain about the noise inside and out from Wranglers. The Gladiator isn’t a car, so you are going to get a little more outside noise than you’d get in a traditional vehicle, especially if you have the soft-top on. You’ll notice it more if you use aggressive off-road tires. The model I tested came with the three-piece hardtop. This greatly reduced the noise, both inside and out. Most cars have a carpeted-type ceiling to help absorb noise. The three-piece hardtop of the Gladiator is a composite material, so you do get a little bit of an echo. All in all, I didn’t find it uncomfortable to drive and have a conversation with my passengers or make a phone call.

Then there’s the cost. Starting off at about $33,000 for the base Gladiator (Sport), the price is a little higher than competitors in the midsize truck category. However, even the base model of the Gladiator has four-wheel drive. Also, with more than 11 inches of ground clearance, all Gladiator models are “Trail Rated” and heads above the two-wheel drive offerings of cheaper competitors.

Even though a V6 doesn’t seem like it would have a lot of power, the Gladiator was very quick off the line and on acceleration. It’s extremely fast when compared to other midsize trucks. The handling was excellent and far superior to that of the Wrangler, given the longer wheelbase. I had no issues making rather sharp turns, too.

Although there wasn’t time to take this model off-road, I don’t see the Gladiator having any issues in the most inhospitable of environments. In fact, it’s rated to forge through 30 inches of water. With its best-in-class towing capacity of 7,650 pounds and 1,700-pound bed capacity, the Gladiator is a super-useful little workhorse.

Unfortunately, due to my height, the Gladiator isn’t a good fit for me. I can’t tell you how much it disappoints me to say that. The vast majority of men and women who buy this truck won’t have this issue and will love every minute of owning this vehicle. So if you’re in the market for a mid-size truck, definitely give the Gladiator serious consideration. It’s a ton of fun to drive and has features the competition fails to offer. I can see the Jeep Gladiator being around for many years to come. For more information, visit Jeep.com.

Karlmann King: What Actually Goes Into the $2.2 Million SUV?