Bond is apparently the only known operative to carry a Walther PPK, and despite the fact that great lengths are made to fake his death he still carries it! 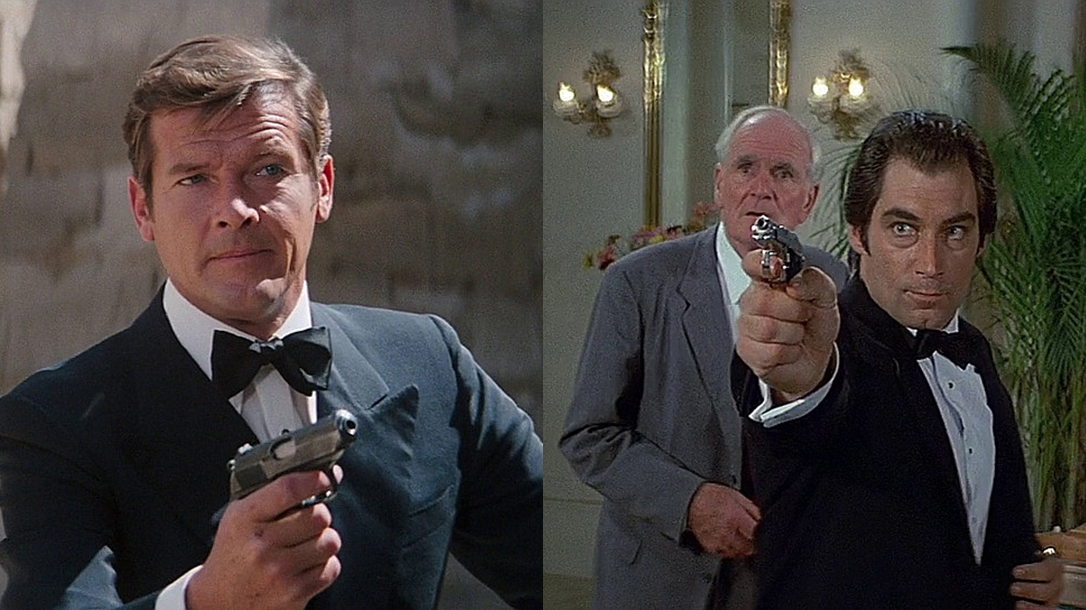 In addition to wearing a tuxedo in almost all the films and drinking a vodka martini on occasion, it is the choice of handgun that has become truly iconic with 007. Ask almost anyone who knows a thing or two about firearms, “What was James Bond’s gun?” The answer will almost always be the Walther PPK. However, that isn’t technically correct. Bond doesn’t carry the gun as often as you think, and actually fires it even less.

So we decided to recap the guns used by Bond throughout 24 official films and one unofficial film (Never Say Never Again). In the first part of this four-part series, we start with the legend himself: Sean Connery. From there, we work in George Lazenby; he managed to sneak his way into the 007 pants for one Bond film. Be sure to check out the other three parts in our series: 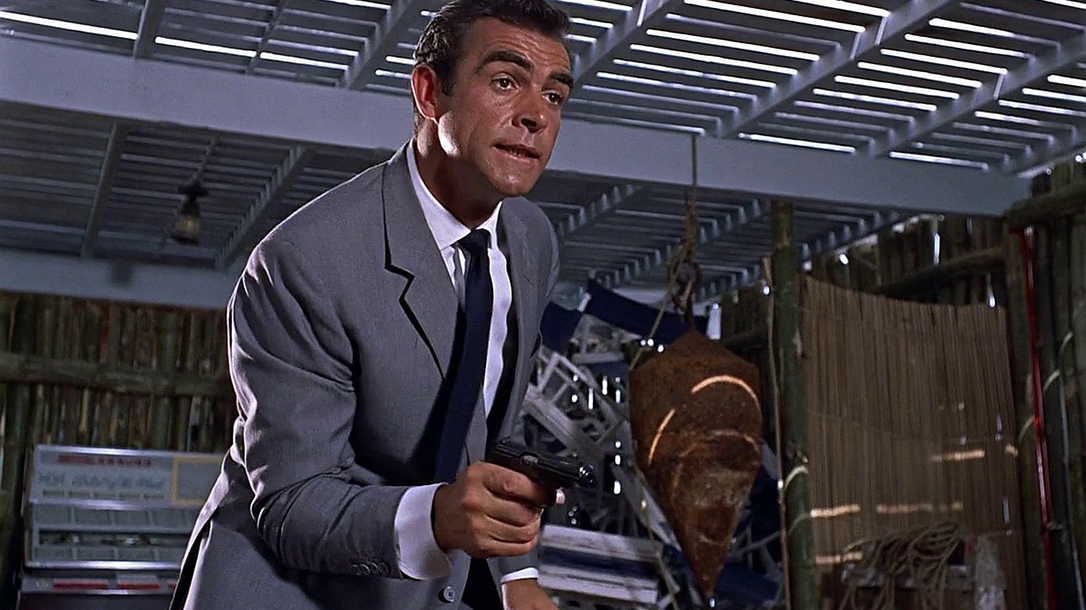 The first in the official James Bond film series, starring Sean Connery, follows the British spy to Jamaica to investigate the disappearance of a fellow British agent. He eventually meets — and in Bond fashion defeats — the titular diabolical Dr. No, and learns about the criminal organization SPECTRE. Interestingly this was actually a rather low budget production. While somewhat dated by today’s standards, it remains a solid introduction for the cinematic secret agent.

It is also the film that introduces the Walther PPK and also notes that Bond had been using a Beretta M1934. A British firearms expert suggested to Bond author Ian Fleming that the Beretta 418 used in the early books was too much of a “lady’s gun” and by the time the series made it to the movies Bond was issued with the Walther. Technically, however, the gun that Major Boothroyd issued Bond was a Walther PP chambered in .380 ACP (pictured), not the PPK chambered in 7.65mm. Back in 1962 most people in the audience probably didn’t know the difference but now you do!

The success of Dr. No ensured that the Bond series would continue and From Russia With Love featured a far larger budget and more exotic locations. It was the film that officially introduced Q (Desmond Llewelyn) and was also the first time Bond actually used a Walther PPK, this time chambered in .32 ACP. Bond also used an Armalite AR-7 survival rifle with custom suppressor and infra-red scope in the film. While not exactly high-tech, the take-down weapon seemed like something a spy in 1963 might be issued.

In the book version, Bond used the aforementioned Beretta Model 418, which was caught in his clothing and almost cost the spy his life. That gun does make an appearance when it was carried by the femme fatale character Tatiana Romanova early in the film. 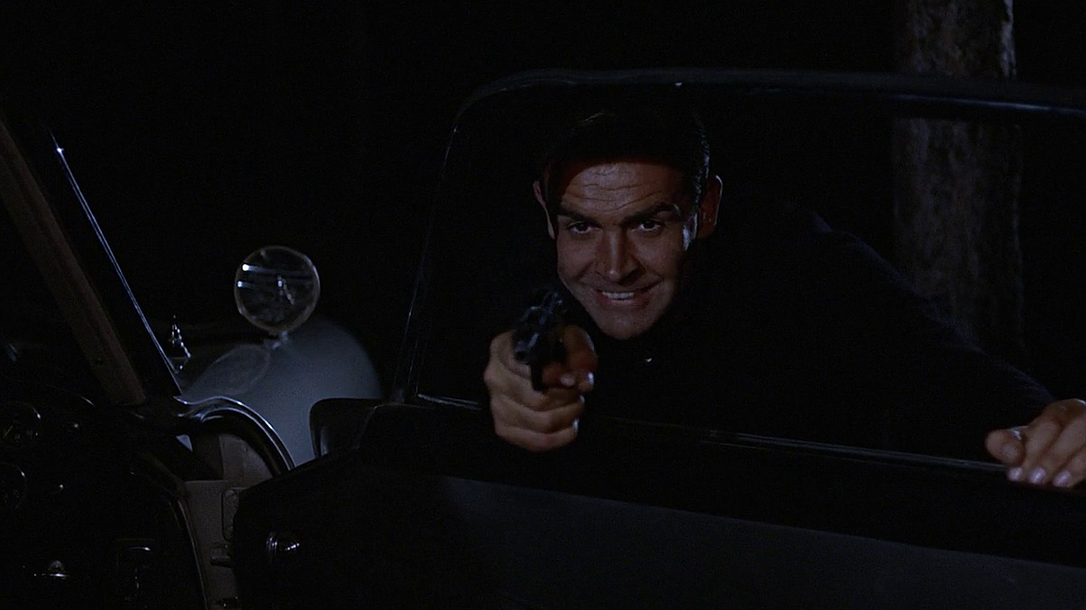 Despite the fact that this film was rather action heavy — and includes a small engagement between the titular character Goldfinger’s men and the U.S. Army at Fort Know — Bond does little shooting. While Bond is seen with his .32 ACP Walther PPK, in the pre-credit sequence he actually kills “Capungo” by electrocuting the hitman in a bathtub. Bond isn’t even seen with the PPK throughout the rest of the movie.

When Bond later engaged Goldfinger’s men at the villains Geneva factory, he carried a Walther P38 (pictured). No mention is made as to why he had that gun instead of the PPK. Perhaps it was an accessory in his new Aston Martin DB5, which also featured machine guns installed underneath the head lights.

Arguably one of the best of the series, Thunderball featured exotic locations, realistic villains and a “straightforward plan” that only involves stealing nuclear warheads and holding NATO for ransom. While it did feature Bond using a jetpack in the pre-credit sequence, this one was not overly “gadget heavy”; instead it relied on a cat and mouse game between Bond and the SPECTRE operatives in the Bahamas. It is worth noting Bond could have been sent to Iceland instead.

In Thunderball Bond used his PPK in a few scenes. However, he took out Vargas — the main henchmen in the film — with a spear gun. “I think he got the point.”

The motives of Bond villains can always be questioned, but SPECTRE’s plan seemed truly dubious at best; it involved SPECTRE developing its own space program to hijack American and Soviet spacecraft to start a Third World War at the behest of the People’s Republic of China. Bond, meanwhile, “went native” and took a Japanese wife with a disguise that sort of made him look Asian if you didn’t look too hard.

Bond carried the PPK again, which actually revealed his “secret identity” as SPECTRE someone noted he’s the only agent in the whole world to carry such a gun; this begs the question as to what Q issued to other Double-O agents. Later in the film Bond used a captured Webley or Colt New Service revolver; he could be seen with both due to a continuity error in the film. And while living as a Japanese fisherman, he was also armed with a Colt Detective Special.

After Sean Connery “retired” from the Bond series unknown actor/model George Lazenby stepped in. While critics were mixed about the film when it was released in 1969, it has actually aged well and is one of the films closest to the books in terms of story. Gadgets are seriously downplayed and Bond actually settled down and got married for real. However, it wasn’t meant to last. This one has an ending that could only be described as a serious downer.

Lazenby did look rather “Bond-like” when carrying the PPK, but also played the part of a special operative with the Cold War era British Sterling submachine gun.

Sean Connery famously “un-retired” and returned to play Bond in the seventh film in the series. Given that it featured locations in Amsterdam, Las Vegas and off the Baja, Calif., coast it provided a sense of “jet setting,” but it relied too much on campy humor and silly gimmicks. Those gimmicks included a sequence in which Bond rode a moon buggy. The goal of Ernst Stavo Blofeld (head of SPECTRE) was also too familiar — a laser satellite is used to destroy various nuclear weapons in China, the Soviet Union and the United States as the nations were held at ransom.

Diamonds Are Forever was another film where Bond was seen with the PPK, but in fact never fired it. Bond did wield a Harrington & Richardson Mark VI Flare Gun in one sequence but it used to launch a piton and attached climbing rope. Let’s just say that with this entry in the series, Connery didn’t go out on top!

To go along with Roger Moore’s Octopussy, this was the “Other Bond” film to come out in 1983. While not an official Eon Productions entry into the Bond series, Never Say Never Again featured Connery returning to the role he made famous. The “unofficial” nature of the film stemmed from a dispute over the ownership of the authorship of Thunderball; it was essentially a remake that film. MGM actually purchased the rights to the film in 1997 making it a quasi-semi-official Bond film.

What is notable about Never Say Never Again is that Bond carried the Walther P5 in place of the PPK. The spy also acquired a few other small arms along the way; this included a Czech SA.25 submachine gun in the opening sequence, while at a later point in the film Bond retrieved a nickel-plated Japanese Nambu Type 14 from a henchman. He also briefly carried an Ingram Mac-10. However, as with the SA.25 and Nambu, he never has a chance to fire any of them. Bond did, however, kill the henchwoman Fatima Blush with a fountain pen gun in what can only be described as typical Bond fashion!