0
SHARES
17
VIEWS
Share on FacebookShare on Twitter
The 1970s era Bond featured Roger Moore, who had already made a name for himself on the TV drama The Saint. While his take on Bond was a bit less serious, he quickly settled into the role and made his own, although it could be argued he outstayed his welcome. 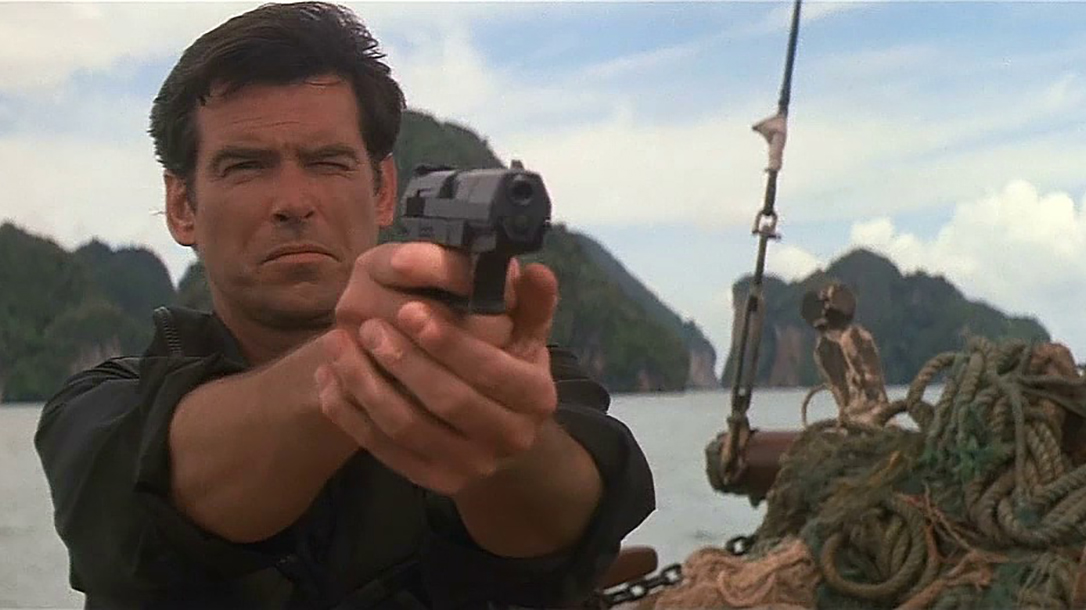 When the torch was finally passed in the late 1980s it went to Timothy Dalton, who brought back some seriousness to the character even if the films were often a bit too whimsical at times. Connery even came out of Bond retirement for a one-off film during the 1980s.

While the villains weren’t always political — and often had their own financial agenda — this shadow of the Cold War is always present in terms of the firepower used by Bond and his opponents.

Be sure to check out the other three parts in our series:

After Connery called it quits “for good,” Roger Moore stepped in and took over the role. His first outing was actually decent, but as Live and Let Die was released at the height of the blaxploitation era in films, this one didn’t exactly age well. The plot was also a bit nonsensical, even if instead of a megalomaniac villain it focused on the more grounded theme of drug trafficking. As a plus, this one offered an epic boat chase. However, the over the top henchmen and campy secondary characters dragged this one down.

Despite a new Bond, he still carried the Walther PPK, yet never had a chance to fire it. Instead, keeping true to the era — and that it was just two years after Dirty Harry came out — Bond also carried and fired a Smith & Wesson Model 29 in .44 Magnum.

While the previous film capitalized on the blaxploitation craze, this one jumped on the martial arts bandwagon. It was fittingly set in Hong Kong and Thailand with some scenes in Macau thrown in for good measure. The film happened to include a few too many coincidences — a flying car and a dwarf henchman — but it did offer a titular villain worthy of the super spy.

Bond never actually used the “Golden Gun” from the title, but instead actor Roger Moore was finally able to blast off a few rounds with the trademark PPK! Bond also fired a few shots with a custom-built bolt-action rifle for an unseen three-fingered hitman.

In many ways the plot is nearly identical to You Only Live Twice, where a super villain tried to start World War III. However, instead of hijacking space ships, he hijacked nuclear submarines via a massive supertanker. Bond was sent to Egypt, of all places, despite plot that involved a villain with ambitions for an undersea empire. This film also introduced Jaws, the nearly seven foot tall hitman with metal teeth.

Throughout the movie Bond carried his usual PPK, but in some scenes he relied a Berreta 70 in .32 caliber instead. The continuity error was likely due to the different locations, where a gun similar in size was what the armorers had available. When Bond freed the captive sailors on the supertankers, he once again used a Sterling submachine gun.

This one is typically summed up as Bond in space! It came out at the height of the Star Wars craze and as such deviated greatly from the book. While the first half of the film was actually a decent spy thriller where Bond needs to unravel the villain’s plan, it ended up being worse than a Pink Floyd laser light show by the end.

Missing from the film completely is the Walther PPK, despite actor Roger Moore holding one in some publicity stills. Bond did use a Holland & Holland Royal double-barreled shotgun in one sequence to kill the villain’s sniper — quite a feat actually! At the end of the film Bond killed Hugo Drax, the film’s villain, with a wrist dart gun; all despite the fact that Bond was held captive previously and somehow the weapon wasn’t discovered. 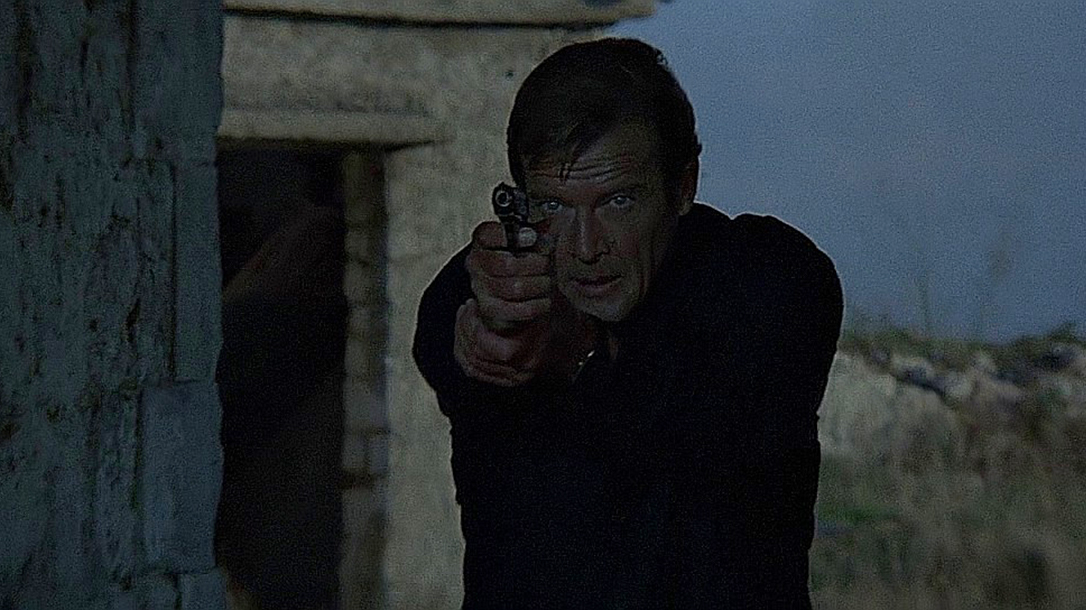 After the over-the-top Moonraker, the series returned with the more grounded For Your Eyes Only, a far more traditional spy thriller where Bond must recover a top secret British naval communication device. The film downplayed gadgets and offered easily the best story of the Roger Moore era.

This film featured a diverse number of small arms, with most being used by the various henchmen. However, Bond stuck with his Walther PPK (pictured), which is described at one point as “Standard issue, British Secret Service.”

Roger Moore was starting to show his age by the time he made this 13th entry in the official James Bond series. It also didn’t help that he managed to dress up as a clown or ride in a submarine designed to look like a crocodile. Yet, Octopussy still offered a reasonably good story — even if it is a bit confusing at some points. Selling copies of Russian crown jewels to fund a way to start World War III wasn’t among the best ideas a Bond villain has had.

As for weapons this one is notable in that the PPK was only seen in the opening credits of the film. Instead, Bond was issued the new Walther P5. In addition, in the pre-credit sequence Bond uses an AR-15/M-16 while on a mission in a nondescript Communist Central American country. Toward the end of the film, Bond was seen wielding a Czech Sa vz. 58 V — a rifle that has an appearance similar to the Soviet AK-47.

Roger Moore should have called it quits a few years earlier, as he is simply too old in his finale outing and it showed! The film’s plot was stale too. It borrowed some plot points from Goldfinger and has an opening that was a bit too reminiscent of The Spy Who Loved Me.

Interestingly, the Walther PPK made a return in Moore’s final Bond movie. Later in the film Bond was seen carrying a shotgun provided by “Bond Girl” Stacy Sutton (Tanya Roberts). At first it was a Remington Model 31, but in subsequent scenes it became a Winchester Model 12 Field Gun. In either case, when Bond used it against the henchmen he found it loaded with rock salt rounds.

Timothy Dalton took over for Roger Moore in this 1987 film that has Bond rescue the girlfriend of a Russian defector. Along the way he headed from Prague to Vienna before going to Afghanistan where he helped the Mujahedeen fight the Soviets. This meant that in the 1980s Bond aided those who would later become the Taliban, so it is best not to think too hard about it.

Bond carried his standard PPK throughout the film. Early on he used a Walther WA 2000 sniper rifle to “take out” a KGB sniper, who in fact wasn’t a sniper but rather the violist girlfriend of the defector. This was also the first time Bond was seen using an AK-style rifle; in this case it was an AKMS he acquired from some Czech soldiers in Afghanistan.

Dalton’s second and final Bond film suffered from cartoonish villains and a lackluster story that had the super spy going rogue to avenge the attack on his friend Felix Leiter. In this one, Bond traveled to a fictional Latin American country — clearly modeled on Panama — to take out a drug lord. Not surprising it marked the end of the run for the series for six years.

Dalton’s Bond once again was armed with the PPK. He also uses a Taurus PT92 provided by Leiter in the pre-credit sequence. Later in the film Bond acquired a Beretta 950 Jetfire. However, among the more unusual firearms in this one is the Signature Camera Gun provided by Q. It featured a fingerprint recognition mechanism in the pistol grip and fired a .22 high-velocity round.