IWI has been around for a minute now. There are quite a few standouts with the IWI name, like the IWI Jericho 941 . Today, however, I’m looking at the IWI Tavor TS 12. Before we get to my complete review of the IWI Tavor TS12, let me indulge in a quick futuristic anecdote. Bear with me. 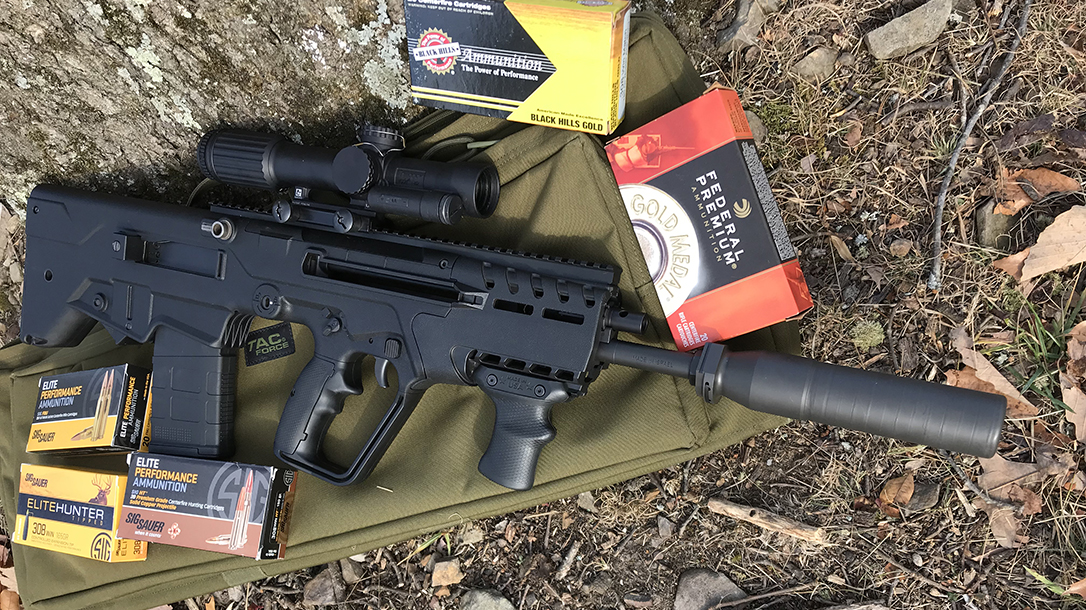 Tavor 7: IWI’s Latest Bullpup Is a Serious Alternative to ARs and AKs

The IWI Tavor TS12, Gun of the Future

Second Lieutenant Johnny Rico cut his chute at 50 feet and let the actuators in the legs of his armored suit take his 600-pound weight. The image intensifier in his visor cleared away the smoke and battlefield obscurants while his suit’s AI tracked the rest of his platoon. Rico’s Roughnecks had all survived the orbital drop from the “Rodger Young” corvette transport.

This attack on the bug home world of Klendathu had been months in the planning. If the mobile infantry could neutralize the arachnids’ brain caste, the war would be over. This fact drove Rico’s troops like men and women possessed.

Rico reached toward his utility pack and unlimbered his Tavor TS12. This semi-automatic bullpup fired tiny fission grenades with enough yield to collapse a bug tunnel or burn through the hull armor of a modern hover tank. The shielding built into his powered armor also protected Rico and his squadmates from the radiation.

Rico signaled his platoon to form up as he took his first leap. His suit augmented his jump with his leg actuators, and his pack thrusters lifted him above a massive five-story bug hut. Turning as he sailed over the huge structure, he set the reticle in his visor on the entrance and cycled through three quick rounds. The TS12 rocked with the recoil while spitting black polymer empties out the side. The three ultra-high explosive rounds detonated in rapid succession, bringing down the entire complex. Enraged bugs scrambled out of the rubble only to be cut down by the Roughnecks.

Rico followed the marker in his visor until he could see the entrance to the bugs’ central hive. He and his troops would secure the tunnel long enough for the engineers to plant their thermonuclear charges. He glanced at his TS12 to see that he still had 13 rounds remaining. Any bugs that came out of that hole would burn to slag.

Robert Heinlein’s “Starship Troopers” is, in my unvarnished opinion, the finest piece of combat science-fiction ever put to paper. Forget the craptastic movies. The book goes into gritty detail describing combat drops from orbit, powered armor that can rip through a building, and light weapons that offer individual soldiers capabilities our modern warriors can only dream about. All of this is the product of the fertile imagination of one of history’s finest science-fiction wordsmiths. And while I added in the details about the Tavor TS12 before, this is a real gun that would be right at home in the weapons locker aboard Heinlein’s “Rodger Young.”

These days, it isn’t hard to find gimmicky drum-fed shotguns that look cool but run poorly, if at all. Most of these guns were designed by guys who use their guns on a firing range, not in a war zone. By contrast, the Israelis build weapons like their lives depend upon them. The new Tavor TS12 from Israel Weapon Industries (IWI) is a gas-operated, 12-gauge bullpup that packs a total of 16 rounds on board. But despite all this firepower, it’s only 28 inches long and weighs 8 pounds unloaded. The vibe you get when you first heft this next-gen blaster is that it looks like it’s really not from around here.

Let’s first address the elephant in the room. The TS12 is an absolutely enormous firearm. This massive semi-automatic 12 gauge feeds from a rotating three-tube magazine and rides within a rugged polymer chassis. However, all of this bulk can be deceiving. The overall package, like everything IWI makes, is comfortable, reliable, functional and cool.

Everything about this gun is radically different. There are four sling attachment points and M-LOK slots aplenty. There is a continuous Picatinny rail up top for optics. IWI threaded the muzzle for standard Benelli/Beretta chokes. And despite its 18.5-inch barrel, the gun isn’t much over 2 feet long.

The short-stroke piston-driven gas system incorporates a two-position gas regulator that is easily adjusted without tools. The charging handle is instantly accessible and reversible. It’s designed to be run with the weak hand so you don’t have to take your primary hand off of the grip. The rest of the controls are well reasoned and functional regardless of your particular handedness. The safety is a simple push button behind the trigger. Meanwhile, the bolt release button is on the right side. The switch in front of the trigger releases the magazine tubes to rotate.

The forearm of the gun is actually a three-part cluster of rotating composite magazine tubes. You can load the tubes from either side. Each individual tube holds either four 3-inch shells or five 2.75-inch shells. Running the gun is just plain cool. To load the tubes, simply press each shell in from the rear until the rim slips past the detent. The chamber can be loaded from one of the magazine tubes or individually through the ejection port. Once topped off, it will indeed carry 16 rounds of 2.75-inch chaos.

Like most autoloading 12-gauge shotguns, the TS12 prefers high-brass shells. With spunky ammo, the model I tested was utterly reliable. Cheap, low-brass bulk birdshot will short-stroke on occasion. The gun feeds 2.75- or 3-inch rounds with comparable alacrity.

The gun’s superlative gas-operated action is smooth and comfortable, even with serious buckshot or slug loads. Meanwhile, the gas system is located above the barrel to keep the line of recoil low. The TS12’s straight-line design practically eliminates muzzle rise.

After you cycle through the first six rounds (one in the chamber and five in the tube), the bolt locks back automatically. Press the release and manually rotate the magazine tube assembly one-third of a rotation and the bolt drops on the fresh tube of its own accord. You then have another five rounds at your fingertips. Once that tube runs dry, repeat the process a second time for a final five rounds. Rotating the tubes is an intuitive process that takes about as much thought as cycling a pump-action scattergun. Since the bolt drops by itself, you can run through all 16 rounds in a shockingly short period of time.

You have to press a button underneath the gun before initially jacking the bolt. Failure to do so will foul the action. Ask me how I know this. I should have glanced at the manual first.

The Israelis make eminently practical guns. The TS12 feels plenty natural after a little trigger time. Reloading is easier than a conventional tube-fed shotgun, and with 16 rounds on tap, you don’t have to do it very often.

The recoil is not unpleasant, even with the heavy stuff. The inline layout and state-of-the-art gas system conspire to keep the gun on target even in rapid fire. Mount up a quality optic like the SIG Sauer ROMEO8H along with something sparkly on the side and the TS12 becomes a close-range beast.

The ROMEO8H is a rugged, combat- capable red-dot sight. It eats 12-gauge recoil for breakfast. With a wide, unencumbered field of view and stupid-proof controls, the unit guides the TS12 in close quarters like a sports car. The ROMEO8H is the next best thing to Johnny Rico’s AI-enhanced, helmet-mounted heads-up display. I also installed a ProTac HL-X light/laser from Streamlight to dispel the dark and keep my rounds on target even in proper blackness.

Double-taps are actually quite easy with the TS12. Where most 12-gauge shotguns will absolutely punish you, the TS12 just thumps right along. The sheer volume of unfiltered power this particular gun projects is tough to capture in print.

A lot of folks are going to buy this gun just because it looks so freaking awesome. I must admit, that was my first reason for adding one to my personal loadout. However, unlike a lot of modern, high-tech scatterguns, the TS12 really does run as good as it looks.

I have a 1980s Franchi SPAS-12 in my personal collection that was adequate to arm the Terminator. The gun’s striking good looks landed it parts in films like “Jurassic Park,” “RoboCop,” “The Matrix” and many others. When first I took my Terminator shotgun out to the range, however, I came to appreciate that you have to be a cybernetically enhanced cyborg to run the thing. By contrast, the IWI Tavor TS12 is pure, 100-percent combat implement.

Once you take its measure, the operating cycle becomes intuitive. The gun’s short-stroke gas piston operating system is scaled up from such weapons as the SCAR16, G36 and Tavor SAR/X95, so it runs like a scalded ape. The gun’s bulk does indeed mean that it is not concealable. However, for home defense or law enforcement applications, the size actually helps keep the weapon controllable.

The landscape is awash in 12-gauge shotguns. Most of today’s examples are variations on the Remington 870 or 1100 simply encased in different trappings. By contrast, IWI designed the TS12 from the ground up to blow absolutely massive holes in stuff very rapidly. Against water-filled milk jugs, the TS12 will reliably put a grin on your face. When unleashed against softer stuff in defense of the home or family, the TS12 would be breathtakingly effective. As it sits in the gun box, it looks just like something wielded by Johnny Rico’s mobile infantry. For even more info, please visit IWI.US.