by Graham Baates
in Guns, Rifles
0

A while back I happened upon a deal for a set of F1 receivers that I could not refuse. Already owning several ARs in various calibers and configurations, those receivers soon left me with the question of what to build next. The inspiration came for an experiment that tests common opinion of what an AR can do. I personally purchased all of the parts for this AR build. I never meant to show this off in media. It was just a fun project, at first. It simply evolved into a social experiment and now grounds for discussion. 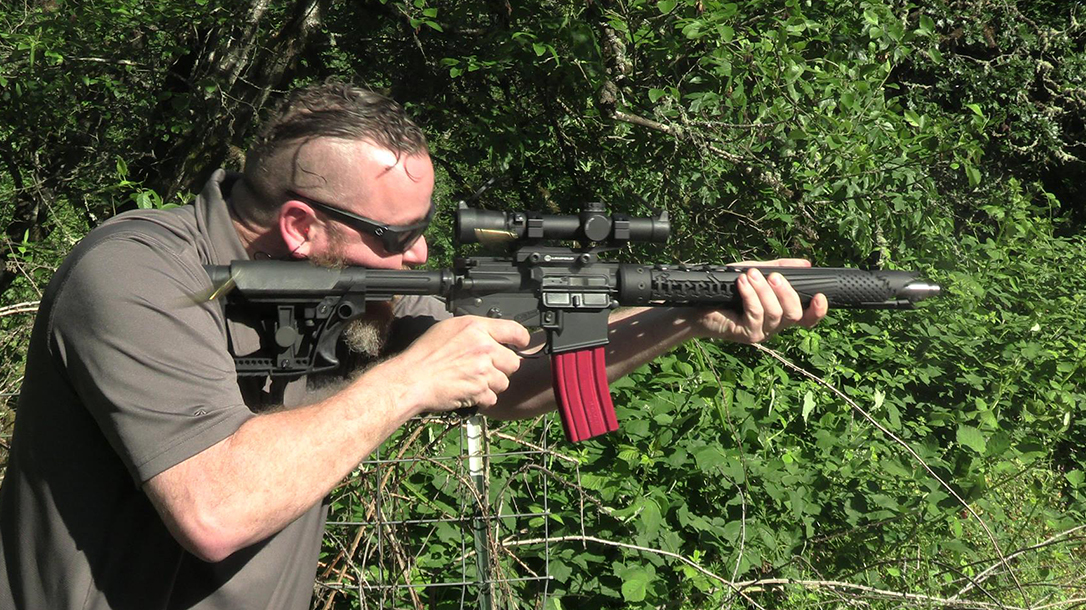 Initial struggles led me to post a YouTube video about it. The comments on that video told me that there are a lot of misconceptions about the AR platform out there, as more than 3,000 comments could essentially be boiled down into seven individual myths as to why my rifle build was impossible.

Take a look at the build list and see if any components, or the mixture thereof, stick out in your mind as parts or pieces never meant to be used together. I included links to the products I used where possible:

The Goal of My AR Build

The goal was to make the rifle as soft-shooting as possible. I was going for silly-soft at the risk of reliability and intended to adjust the gas settings and buffer weight to achieve that. A rifle-length gas system and reduced reciprocating mass would serve as the core of a soft-shooting rifle.  The first range trip was problematic as the rifle wouldn’t always complete a cycle. Sometimes it would eject the spent case, but not pick up the next round, other times it failed to eject.

Before going into the steps I took to remedy this, let’s take a look at why the Internet said the gun couldn’t work and explore where there might have been validity, as well as reality.

The Myths of Rifle Building

Now onto the actual myths I tried to disprove here.

The theory here is that there isn’t enough dwell time. That is to say that the time pressure is still blocked behind the projectile and being pushed into the gas system is too short. This is thought because there is only ____ of barrel between the gas block and the muzzle. The effect is exacerbated by an already long gas system, which naturally results in lower pressure hitting the bolt carrier. Though the initial ARs used the long, rifle-length gas system, many builders have shied away from it in recent trends. Why? Shorter gas systems increase reliability with a stronger punch of gas pressure to the carrier.

Reality: While a rifle-length system provides less pressure and for a shorter duration, it remains a viable and common application. A gas system this long on a relatively short barrel does present the opportunity for challenges. However, it has been proven practical enough that even mainstream barrels makers—such as my chosen Aero Precision—offer them.

I surmise the theory is that by exposing the gas block it’s too easily bumped. For my build I wanted easy access to the gas block.

Reality: The first AR used an exposed gas block, as did the M16A2 I took to Afghanistan and again to Iraq. The military compensates for rough use by pinning the gas block. However, as this rifle is not intended for hard use and abuse, a set-screw positioned in a dimple is ample retention.

The theory here is that the gas black isn’t able to clamp strongly enough to the barrel or seal completely.

Reality: The length of the Patriot Ordnance Factory Dictator gas block is deceiving. The block only has one pickup point toward the rear of the block. Meanwhile, the barrel isn’t fluted in that section. The forward clamp rests on flutes, but those flutes are the same diameter as the gas journal. While I lose surface area, clamping force remains and the front clamp is ancillary, not primary.

Myth 4: F-1 Receivers are venting too much gas

Many feared that such open receivers were permitting gas to flow too easily, resulting in a loss of pressure needed to cycle the rifle.

Reality: The AR receiver plays no role in containing gas pressure for the purpose of cycling.  Gas travels from the tube into the key, presses against the tail of the bolt (that part that always gets so dirty) and vents out the sides of the carrier.

Myth 5: An aluminum BCG doesn’t have enough inertia or momentum

If the carrier is too light, it won’t be able to act against the buffer’s weight or spring tension. The DSA BCG weighs 5.2 ounces compared to a standard steel BCG weighing 11.6 ounces.

Reality: There is some validity to this. The functioning of the rifle depends on a balance between gas pressure, carrier weight, buffer weight, and spring tension. This build began with an adjustable buffer for that reason. The overall weight of this build’s buffer and BCG is 6.7 ounces; compare that to a standard BCG and H buffer with an overall weight of 15.4 ounces. This build’s reciprocating mass is only 43 percent of “the norm.”

Comments were that without the buffer retaining pin, there would be constant pressure on the bolt carrier. In turn, people said this would resist its efforts to move. Either that or that without a pin to stop the buffer, it would travel too far forward into the upper receiver and interfere with the hammer.

Reality: The buffer retaining pin serves only as a convenience for rifle take down. If you open your rifle you’ll note that the carrier fills the upper receiver nearly completely in its forward-most position. It’s simply not possible for the buffer or spring to extend any further into the upper receiver. In this receiver set, the retaining pin is threaded in using a tiny Allen key that I did not want to have to mess with to adjust the buffer, so I simply left the pin out of the build.

Concerns stem from the idea that a buffer spring’s rate is set based on the amount of weight and force that will be acting against it. For example, a carbine buffer tube would require a carbine spring (higher rate than a rifle spring per inch of length), standard buffer, and standard bolt carrier weight expecting carbine-length gas impulse.

Reality: This myth could have been true if the build wasn’t using a reduced-weight carrier and buffer to compensate for the relatively soft gas impulse. Exceptions do of course exist, especially with the tendency of barrel makers to be a little generous with their gas port sizes to help increase reliability. But I countered this potential by using an adjustable-weight lightweight buffer.

The Internet suggested enlarging the barrel’s gas port, changing barrels, changing gas system lengths, and even buying a suppressor—and waiting for its approval—to make the rifle run. The solution was much easier and less expensive than any of those suggestions. I picked up a reduce-power recoil spring for $20. Now the rifle runs without issue.  With the adjustable buffer empty, I’m able to tune the gas system for a silky-smooth rifle that either runs only 5.56x45mm, or with one click on the gas block will also run the lower-pressured .223 Remington.

Posting the original video turned into a great social experiment. Those commenting demonstrated their knowledge (or lack thereof) of the AR platform. Also, quite a few exhibited a fear and hatred of the unknown or those who dare to be different. The original recipe for the AR still works today, as do the trend-builds of using shorter-than-needed gas systems to increase reliability.

My build was the result of growing tired of “just another” AR. I was looking to experiment. In the end, it turned out wonderfully. Also, a special thanks to Cascadian Gunwerks of McMinnville, Ore., for its support in this “impossible” build via Cerakoting, assembly of the upper receiver and proper alignment of the gas block verified with a Hawkeye Borescope.