The first week of October, a gaggle of gun writers and editors gathered in the Teton Valley just west of the Grand Tetons for their annual Athlon Outdoors Rendezvous. More than just a meeting, the Rendezvous’ purpose is to review the latest and greatest guns, optics, bullets and more. It previews what’s coming to market the following year. No different than years past, some of the new stuff consisted of updated versions of current products. Meanwhile others were “top secret,” not to be revealed to the public for another couple of months. Some of the new hunting rifles we can talk about now from Rendezvous follow. 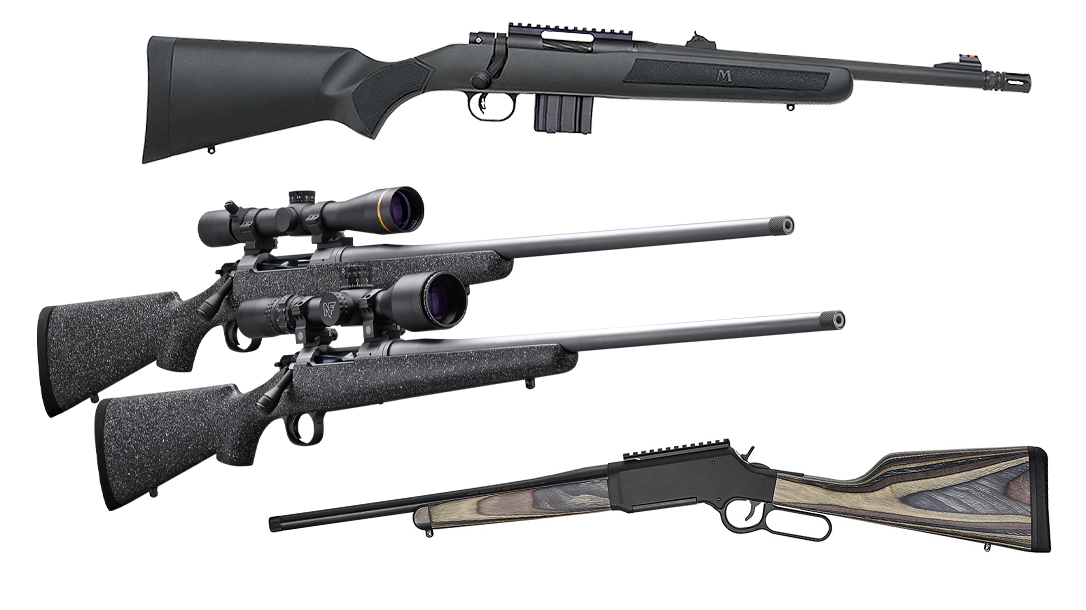 5 Hunting Rifles Ready for the Field

If you’re looking for a rugged, light-weight collapsible-stock chassis rifle in 6.5 Creedmoor (or .308 Win.), the Sig Cross is worthy of a close look. I got a chance to hammer steel out to 700 yards at Rendezvous with this rifle, and it’s just like I remembered it at SIG’s SHOT Show Media Day a couple of years ago.

In 6.5 Creed, this rifle weighs 6.8 pounds empty. Couple the light weight with a folding stock and it should make a great pack rifle. (sigsauer.com)

Mossberg’s MVP line of bolt-action rifles is very impressive when viewed from a cost-benefit perspective. This writer has handled and shot several MVP rifles over the past couple of years, and their accuracy is amazing. The next rifle to join the MVP Patrol lineup is a 300 Blackout model that accepts AR-style STANAG magazines.

Many years ago, when Remington and its sister silencer company, Advanced Armament Corporation, launched the 300 BLK, they learned quickly that this cartridge didn’t behave in their bolt-action. I’ve still got the Model 7 in 300 BLK, and it’s a fun gun to shoot… but. The inherent design of a Remington bolt-action with the type of ejector/extractor found in Model 700s or Model 7s is problematic. Half the time I pulled the trigger and tried to eject the empty case it dropped on top of the stack, causing feeding problems. Shortly after Remington introduced the 300 BLK in a bolt gun, Savage Arms started down the same path and found its own set of cartridge-related problems. For that reason, Savage never introduced a 300 Blackout bolt-action. (mossberg.com)

Mossberg to the rescue. The MVP Patrol 300 BLK at Rendezvous ran like a Timex (for those too young to remember the wristwatch commercials touting “It take a licking and keeps on ticking,” the simple translation is “dependability.”

The MVP Patrol in 300 BLK wears a 16 ¼-inch barrel, Picatinny rail, iron sights and its capacity is only limited to the size of magazine used. It should be noted that the threaded barrel is 1:7-inch twist, so it’ll handle long, heavy subsonic bullets with ease.

Want a great bolt gun to shoot 300 Blackout subs? This one might just become a favorite. Even though the 300 Blackout cartridge was engineered to run in an AR, the ultimate in quiet shooting is a bolt-action repeater shooting subsonic ammo.

The past several months I’ve been shooting Savage’s new Impulse Hog Hunter in .308 Win., and it’s been an eye-opening experience. Once I “unlearned” running a bolt-action in the traditional manner and got used to the Impulse’s new bolt stroke, I learned just how much faster this rifle is in trained hands. With the popularity of the 6.5 Creedmoor, it made perfect sense to camber the Impulse for this cartridge.

While at Rendezvous I got to burn up quite a bit of 6.5 Creed ammo banging steel from up close to “way out yonder.” Still just as fast as any other Impulse, this new one for 2022 shoots a bit flatter than the rifle I’ve been running. (savagearms.com)

The next generation of the ground-breaking Backcountry family, the Backcountry 2.0 builds on the classic steel Weatherby Mark V action — with some key updates. Still equipped with a super-thin, lightweight fluted barrel, it is contoured at a #1 MOD or #2 MOD, depending on the chambering.

The most noticeable upgrade is the new carbon-fiber Peak 44 Blacktooth stock, the lightest versions of which tip the scales at under 20 ounces.

Also grabbing the eye is the second generation 3DHEX recoil pad, the first production 3D printed pad the firearms world has seen. Hidden inside the pad are a series of interlocking voids that progressively collapse during recoil, expanding the time component of the recoil impulse and deadening magnum felt recoil.

More pronounced spiral fluting on the bolt body not only trims a little weight, it also reduces bearing surface within the action and results in even smoother function. Further, the newly-threaded bolt handle comes with a lightweight aluminum extended and skeletonized knob.

Fit with Weatherby’s highly-effective Accubrake ST, this brake blends to match the profile of the muzzle. With 30 symmetrically-spaced ports that help harness the recoil, it tames magnums well.

Starting at just 5.2 pounds and 5.4 pounds in magnum chamberings, the Backcountry 2.0 also sports an updated paint scheme, with action and barrel protected by a Cerakote shell of Patriot Brown, with the stock carrying a brown and green pattern over exposed carbon fiber.

Weatherby’s Mark V Backcountry 2.0 Carbon sports a carbon-wrapped barrel to shave some more weight. The Ti, Back Country Mark V sports a titanium action, trimming more ounces. Stepping it up another notch, the Back Country Mark V Ti Carbon adds a lightweight, carbon-wrapped barrel. The suggested price for a Backcountry Weatherby starts at $2,499 and goes up to $3,849 for one with all the bells and whistles. (weatherby.com)

The most newsworthy thing about hunting rifles I learned at Rendezvous was that CZ is discontinuing its current lineup of centerfire bolt-action rifles. Gone are the models CZ 527, CZ 557 and CZ 550 Safari rifles. I’ll let that sink in for a moment.

Before you start an internet search for these soon-to-be-discontinued, fine CZ rifles that are sure to go up in value, stick with me for a few minutes to find out what’s coming… the CZ 600.

I got to visit at length with Jason Morton, CZ-USA’s VP of marketing about the new CZ 600 series of rifles. Even though these were pre-production rifles at Rendezvous, they served well to get a solid idea of what’s coming for 2022.

The CZ 600 series will be comprised of four basic models next year: the Alpha, Lux, Range and Trail. Before we jump into model specifics, let’s see what’s coming regarding specifications and features for the CZ 600.

The CZ 600’s action is designed to SWAP BARRELS with three Torx screws holding things in place. Bolt heads are swappable, too, to reconfigure the bolt to fit various cartridge heads. You won’t need a “go gauge” to reset a barrel to the action, since the bolt lug system mates up with the barrel shroud in a manner similar to swapping barrels on an AR-style rifle. More precisely, the barrel-action lockup is styled more closely to Sako’s TRG and Barret’s MRAD sniper rifles.

CZ took a novel approach to its 600 series safety. It’s a tang-mounted vertical push button plunger. You push down to release or reach behind the trigger guard to push up and back into the safe position. Engaged, the safety locks the bolt.

Other key features include threaded muzzles, polymer, detachable box magazines and prices that provide a lot of value.

Selling for $749, this model is available in all 10 cartridges previously mentioned. It gets its 1 MOA accuracy guarantee from a synthetic stock, aluminum receiver with integral Pic rail bases, a semi-heavy barrel profile and an adjustable trigger.

Retailing for $849, the Lux features a European-styled walnut stock, sporter weight barrel, open sights and a steel receiver that’s drilled and tapped for scope bases. It provides a 1 MOA accuracy guarantee, too.

Looking to shrink groups? The CZ Range is the precision model, boasting a .75 MOA guarantee. Contributing to this model’s precise nature is a heavy target barrel, laminated stock with adjustable cheek piece and a steel receiver. Retailing for $1,199, the Range will first be offered in .308 Win. and 6mm Creedmoor.

This model takes a hard turn in appearance when compared to CZ’s other new rifles. Described as a “love child” from the pairing of an AR-15 and a chassis rifle, the Trail’s mini action is only offered at this time in .223 Rem. It uses AR-15 magazines, a telescoping stock, M-LOK handguard and a Picatinny rail for optics mounting. This one comes with a 2 MOA guarantee and a $1,155 price tag. (cz-usa.com)