Here's a look at what you can win.

Hornady asked us at Ballistic Magazine what we could do with a barrel of 14,000 rounds. We said, “How about we run a 10,000-round torture test and give away everything that’s left?” And so, here we are. While you’re watching the POF P415 burn through all that ammo in the video below, you can enter for a chance to win the remaining 3,800 rounds of Hornady Frontier ammo, a new POF-USA P415 rifle and more! Here’s what’s up for grabs:

Scroll to the very bottom of this post to enter. And don’t skip out on the video we put together — it was a lot of fun!

How It Came Together

There’s a lot of bravado in the firearms industry. Many firearms manufacturers out there, especially the newbs, tend to base their marketing strategy around this thinly veiled promise: We are the biggest, the baddest, the toughest and the most durable—and of course, we promise our customers that our rifle will make you appear to be the most OAF (Operator As F$%@) son of a gun at the range. And if that doesn’t work, supplement your social media with gun bunnies. 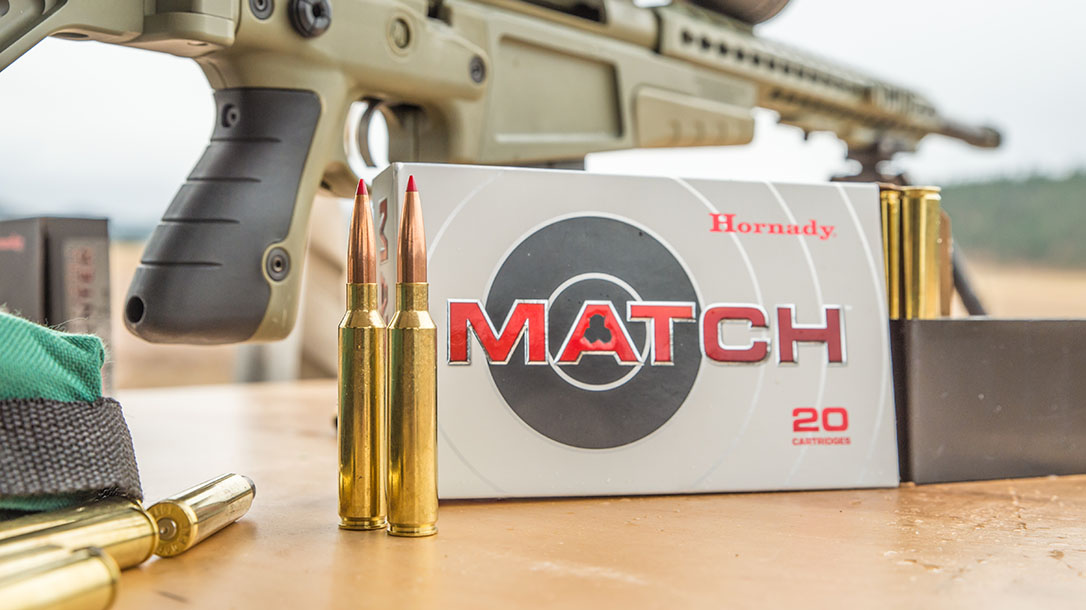 But for those actually putting lead downrange, for service work, competition or defense needs—and not just adding expensive paperweights to their collection only to be polished and ogled whilst sucking down beers with buddies during poker night—it’s the brands that produce reliable, quality, die-hard firearms that last during prolonged periods of use and stand the test of time that gain genuine respect (and market share) in the industry. You know who you are, as do those truly in the know.

When we approached Frank DeSomma, the founder of Patriot Ordnance Factory, or POF-USA, with the proposition to drive one of his company’s most widely revered rifles, the P415, to critical failure in a torture test designed to burn the gun up, we expected some resistance. The select-fire P416 went viral after Eric Blandford—aka IraqVeteran8888, known for his meltdown tests on YouTube, which literally left other guns in flames—ran more than 2,500 rounds through the P416 on full-auto in approximately 30 minutes and found it to be one of the only rifles to stand the test of torture and keep going. Would DeSomma accept our ridiculous proposal to up the ante?

“Hornady wants to send 10,000 rounds to you, and we’d like you to run the gun until the barrel droops like Elmer Fudd’s, or the thing melts down to its basic elements, whichever comes first. What do you say?”

DeSomma’s response encapsulates his outspoken, unabashed personality and engineering spirit. Because, as he will tell you, he’s an engineer at heart, and that means life is about figuring out how and why things work, and how to improve on them. “Let’s do it,” he said. “But let’s only lubricate it once from the factory, and over-gas the hell out of it. Let’s see what happens.” Now that’s a man who stands behind his products.

Hornady sent out a massive barrel of new Frontier rounds—14,000 to be exact. Over the course of the next week—with the help of the staff at POF-USA loading 10,000 of these rounds into 30-round Mission First Tactical mags, a handful of Magpul PMAG D-60 drums and MagPump magazine speedloaders—we had a mountain of mags plugged full of lead and brass, ready to rock.

The P415 was prepared just as it would have come from the factory with DeSomma’s orders to staff: “No special treatment. Grease it once.” We were set to travel to the Phoenix, Ariz., shooting range known simply as “Cowtown,” where we would run the gun in 300-round bursts, with five shooters dumping two mags (60 rounds) each in a procession at rubber dummy targets, firing in approximately one-round-per-second intervals for as long as it would take to exhaust the stockpile.

The only break between 300-round volleys would be for approximately a minute to take heat-meter readings with a laser heat scanner on the bolt face, barrel and other components and some quick FLIR camera snapshots to gauge overall heat retention. This data, as DeSomma put it, would provide invaluable insights into what was going on throughout the test in terms of heat stress and demonstrate the way that his patented heat-sink barrel nut helps dissipate heat versus a traditional steel barrel nut.

When asked how he thought the test would go, DeSomma said, “Honestly, I doubt the barrel is going to hold up for the full 10,000 rounds under that kind of constant heat and at that rate of fire. I suspect some standard small parts that require regular replacing under normal conditions will need to be swapped out, too. But we’ll see just when and what.” This was a pragmatic, engineering-minded and refreshingly honest assessment.

Over the course of the next three-and-a-half hours, the cacophony of gunfire had our teeth rattling and left those rubberized dummies looking like Swiss cheese. But to say the test results and experience were more than worth it would be an understatement. And, dare we note, they were a testament to what happens when exceptional engineering and innovation standards in the AR platform meet absurd and extreme conditions. But don’t take our word for it. Watch the beatdown for yourself. Enter to win the entire package below the video!