0
SHARES
25
VIEWS
Share on FacebookShare on Twitter
It is no surprise that most movie stars are anti-gun. On-screen Hollywood’s stars are constantly involved in ever-increasingly epic shootouts. However, off-screen it’s a different story: Hollywood simply hates guns. Hollywood’s overpaid elite routinely speak out against the Second Amendment, despite relying on it for movies sales. As we’ve documented before, Hollywood’s hypocrisy knows no bounds.

But there is another part of this story. Hollywood typically gets everything about gun shows, gun shops and gun sales completely wrong. Either the screenwriters, directors and producers don’t care about accuracy, or it is just another attempt to make firearms — and those who buy them — look bad.

Despite all the liberal rhetoric about the “gun show loophole” and unlicensed private gun sales, Hollywood hasn’t really depicted many movies that feature the inner workings of a gun show. In fact, only the recent film to do is “White Boy Rick.” The the biopic revolves around Rick Wershe Jr.,  a Detroit teenager who ended up as the youngest FBI informant and later drug kingpin. The film offered a notable scene at a gun show.

The scene features Rick (played by Richie Merritt) talking to a dealer at a Detroit area gun show in 1984. Attending gun dealers use bright banners in a grim-looking hall and the NRA can of course be seen in the background. As a youth who grew up in Michigan, this writer attended plenty of gun shows in Detroit and the surrounding area in the 1980s; none looked like this one. Let’s just chalk it up to artistic license.

The Case of the AK

Visuals aside, the way the scene plays out is good for the story, but so far from reality that the filmmakers should be ashamed for claiming this is “based on a true story.” In the scene, Rick is checking out an AK-47, which he tells the dealer is Egyptian, not Russian.

One minute later, Rick Sr. (Matthew McConaughey) comes up and makes a stink that the dealer tried to sell a 14-year-old an AK-47. He then promptly demands a deal on multiple firearms … or else! Maybe it is the way the scene was written but, to the viewer, the dealer didn’t try to sell the kid anything. Moreover, there was no law in 1984 — or one now for that matter — that precludes a minor from asking questions about a firearm.

Then there is the fact that AK-47s, especially Soviet/Russian ones, simply weren’t available commercially in the United States and wouldn’t be until the 1990s. Even the now-common SKS rifles were far and far between. Plus, commercial ARs were seriously expensive. These are just facts that the movie gets wrong about firearms in general.

Then the story tries to suggest that Rick Sr. is a legit gun dealer with a Federal Firearms License. However, information including licenses is never exchanged when he buys (extorts to get) the AK-47s.

Throughout the film both Rick Sr. and Rick Jr. are selling the guns and illegal “silencers” to various lowlifes. At one point the FBI threatens the Rick Sr. by noting that a gun he sold was used in a crime. In the real world, that is a huge problem for FFL holders. In the movie wold, Rick Sr. simply tells off the FBI and they leave.

The inclusion of the gun show, the mention of FFLs in general and the clientele of Rick and Rick are just there to make gun dealers look bad. In my opinion, in “movie land” FFL holders are apparently all scumbags.

Typically when Hollywood depicts gun shops or military surplus shops onscreen, it is a place run by another level of lowlife, opportunist, extremist or just someone who doesn’t trust authority. Instead of being patriotic, law-abiding citizens who work hard to make a living, gun shop owners in the movies are more likely to be associated with a militia. They are, at the very least, depicted as distrustful of the police and government. 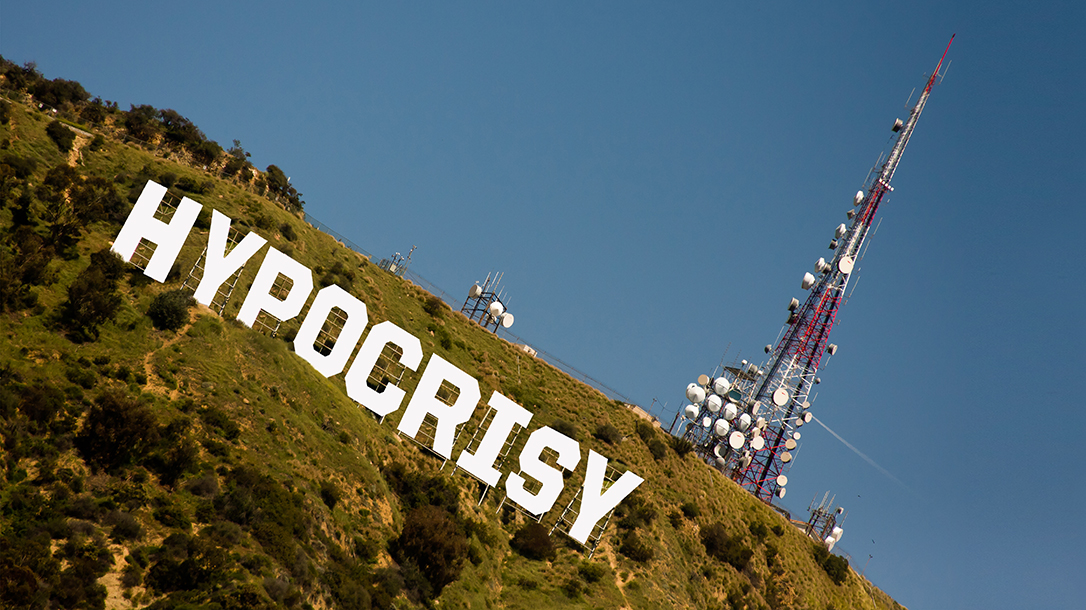 This is most notable in the 1993 film “Falling Down,” starring Michael Douglas. He plays an unemployed defense contractor who has anger management issues. At one point, Douglas’ character enters a surplus store. The owner turns out to be a neo-Nazi who sells illegal firearms including an M72 LAW rocket launcher. This all happens in Los Angeles, no less.

The types of weapons offered for sale is another issue, with 1984’s “The Terminator” among the most egregious examples. Not only did the terminator manage to kill the careless gun shop owner, who handed a customer a shotgun while its rounds were on the counter, but then the assassin from the future left with an Uzi.

As seen in the film, the Uzi lacked the extended barrel required for all commercial models. On top of that, it was fully automatic. One argument is that a robot from the future would be capable of modifying the weapon, but this is never shown. Instead, the fully auto version only suggests to viewers that such guns are readily available for sale.

The same holds true for the more recent remake of “Death Wish” starring Bruce Willis. In this version, Willis’ character actually does go to a gun shop, only to decide a background check and waiting period aren’t for him. He ends up using a handgun he found on the body of a gangbanger in the ER where he works; a convenient plot twist, but it works. In fact, most of the way this film addresses firearms is solid until the finale (spoilers ahead).

When the bad guys show up to take out Willis and his character’s daughter, Willis now suddenly is armed with a BDR-14-3G pistol, which fires fully automatic. This weapon is not available even as an NFA weapon. So unless another gangbanger died with a stolen one in a scene we missed, it is an impossibility. It is also unnecessary for the movie. Willis isn’t playing John McClane, but rather a gun-hating liberal who was pushed too far. Likewise, it again serves to suggest that gun shops just happen to stock such weapons.

Gun Dealers and Their Firearms

The “independent” gun dealer is also shown to be a lowlife; someone more concerned with money than people’s lives. This is true of such films as “Lord of War” and “War Dogs,” which suggest almost anyone can become an arms dealer. There’s also the case of “Jackie Brown,” where Samuel L. Jackson played a shady gun dealer who mostly supplied to gangsters.

While the arms dealer films at least, to some degree, address the issue of end user certificates and highlight the efforts dealers go through to obtain their products, most of the other films make it seem like supply is never an issue. A real world gun runner like Jackson’s character would have been swooped up in a matter of weeks. Gang members flip all the time. And while that might be part of the plot, are we really to believe that he has been successful for so many years? It’s a stretch.

Many of the comments made by these characters are incredibly quotable, but none are grounded in reality. One example is how Jackson suggested that Intratec advertised its TEC-DC9 as “the most popular gun in crime.” That never happened, but it was certainly quoted by anti-gun types over the years.

Then there’s the AK line. For those unfamiliar, Jackson’s character states, “When you absolutely, positively got to kill every motherf*cker in the room, accept no substitutes.”

Classic line. However, clearly either Jackson’s character or filmmaker Quentin Tarantino didn’t know much about AK-47s. Jackson goes on to describe the Russian AKM as Chinese, which it clearly isn’t. Wouldn’t a gun runner know his guns?

And therein lies the problem. Directors like Tarantino make bold statements about firearms with little research. Some education on the guns and, more importantly, how these items are sold could go a long way.