by Armando Basulto
in Gear, Knives
0

Many are breaking away from the social norms of their generation, seeking to rise above the expectations of their peers. Some, like young blacksmith Liam Hoffman, are in the vanguard of young people with a revitalized work ethic that would impress the stalwart frontiersmen of yore. Liam became a household name with his appearance and amazing performance on the competitive bladesmith reality show Forged in Fire. But he was on the path to knife-making stardom before audiences or the show’s producers knew who he was. Most already knew of his company, Hoffman Blacksmithing. 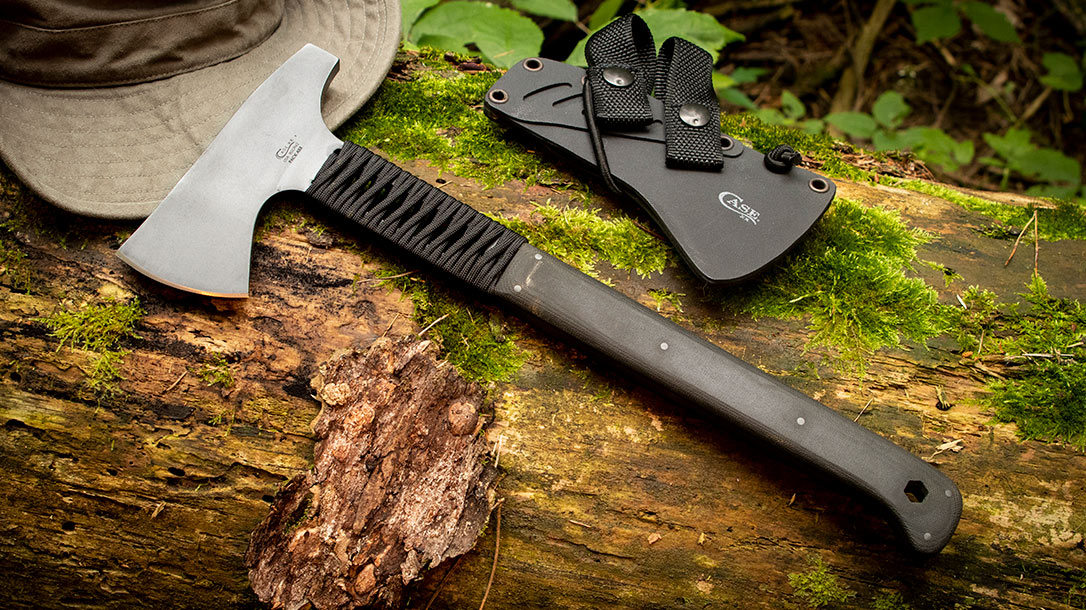 Hoffman Blacksmithing is now one of the most successful blade- and tool-making outfits in the market today. With Hoffman axes in demand all over the world, many see them as the par excellence of tool craftsmanship. In 2017, Liam wrote a book, Forged: A Guide to Becoming a Blacksmith, as a primer for new blacksmiths. It provides insight and tips that even veteran bladesmiths have found helpful.

Hoffman Blacksmithing is expanding and adding employees to keep up with the demand and expansion into new markets. It is providing tools and materials to other blacksmiths. And all of this focused energy comes from a young man not yet 25 years old who already has more time at the forge than many men twice his age.

How The Fire Began

Liam Hoffman grew up in the rural mountains of North Carolina, steeped in small-town life. Like any natural habitat partitioned off from the rest of the country, things move at a different pace and rhythm in the Appalachian valleys. The way of life that others may see as historical are just the day-to-day present of folks who see no reason to race to the grave. Here, a young 13-year-old boy’s predilection for working with metal and crafting knives was encouraged rather than questioned.

“First thing I ever made was a knife—don’t know why it was a knife. But I did end up making all kinds of things like pot hooks, stuff like that. I grew up camping, hiking and building fires, so using knives was normal to me,” Hoffman recounts.

He was an active outdoorsman and motivated to learn and better himself in a wide variety of skills. Like many boys with outdoor inclinations, Liam was very involved with his Boy Scout troop, earning all the badges required to climb the ladder of excellence and reach the coveted Eagle Scout rank.

“Being a Scout didn’t necessarily help me with blacksmithing directly, but it taught me about being organized, taking charge…” It was this mastery of focus and organizational skills that helped Hoffman juggle many activities in high school. This was while developing blacksmithing skills at a level that he began selling his first knives while still in school.

Even the most focused and dedicated teens will sometimes lose direction and deviate from their mission when they get to high school. The distractions are many. Most fall off the path when they become misdirected by the two biggest targets to chase: gas fumes and perfumes. Liam, however, continued along his blacksmithing course.

In high school, he found a supportive community of friends and teachers who recognized his potential. In fact, some of his biggest fans and buyers were the teachers themselves.

Liam says, “I’d have a backpack full of knives, and I’d sell my knives to teachers.”

At his school, the students and staff already appreciated the master craftsmanship of this ambitious young man. They wanted to support, both morally and tangibly, the budding career of a promising blacksmith.

Liam Hoffman’s feature on the reality-TV show Forged in Fire spread his fame beyond his school and the in-the-know blade community. For those unacquainted with this popular History Channel show, the format of each episode consists of a competition between bladesmiths in three different timed, progressive challenges.

Each contestant must create a blade with unfamiliar materials in the first round. Then finishing his or her knife into a functional weapon in the second round. Finally creating an iconic edged weapon from scratch in the final round.

At each step, the bladesmiths are judged by a panel of seasoned knife-makers and weapons experts and eliminated until only the best remains as the Forged in Fire Champion.

Liam received several requests to appear in the competition, unbeknownst to avid viewers of this now wildly successful show. However, he felt he was too inexperienced and young. And his own self-disciplined humility restrained him from entering the fray.

Liam was first approached for the show just as he was graduating from high school due to the rising popularity of his knives among collectors of fine blades.

“They reached out to me before Season One, before anyone had ever heard of the show,” Liam recounts. “They were reaching out to anyone who had anything to do with blacksmithing. I was in high school. I didn’t even reply because I didn’t know what it was and didn’t think I was good enough.”

The Decision to Go

It took two more seasons of prodding from the producers and the cajoling of a good friend to finally get Liam to accept the invitation to audition for the third season.

“The selection process to actually get in took almost three months. There was lots of paperwork, Skype interviews and screen tests. We did the filming two days after BLADE Show in 2016, but the show didn’t air until September of 2016.”

Liam went on to become the Season Three Forged in Fire Champion, beating out older, more experienced and established bladesmiths with his creation of a traditional Himalayan blade called a Kora sword. This high-profile win gained Liam a wider audience for his superb craftsmanship and gave the already growing Hoffman Blacksmithing an invigorating boost.

“The show really helped us in a long-range game, with people recognizing the brand and me. You definitely can’t underplay how much it helped us.”

Currently, Liam has a reputation for creating some of the best-quality work axes in the field. It has become the main focus of Hoffman Blacksmithing. His axes are some of the most sought-after pieces for both collectors and those who use them in the field.

“Axes fell into my lap, in a sense,” Liam shares. “I love the shape and function of an axe, as well as the woodworking that goes into it. Once I began making them, I filled a demand and things took off. Our axes use higher-quality materials and finishes than others.”

The Hoffman catalog of axes offers a variety of styles to fit a diverse group of users from casual backpackers to serious forestry workers. Representative of the Hoffman quality is the popular Saddle Axe.

This double-bit beauty has a deceptively good balance and compact enough to include in a backpack. Or, as the name implies, attached to a horse’s saddle or, more likely, your belt. Tree specialists in the forestry industry originally used these types of axes. They would ride through timber stands grading and marking trees for harvest. This gave the saddle axe its other common name, the cruiser axe.

The two heads of the 2.25-pound Saddle Axe allow the user to utilize one bit for heavy work and save the other bit for finer tasks. The edges will hold their sharpness and shape even after heavy chopping.

The axe head is hand-forged from a solid block of 4142 chrome-moly steel. This low-alloy chromium-molybdenum steel is reputed for its superior wear resistance, rigidity and good impact resistance. The heat treat provides exceptional performance in the field. The razor-sharp edge on one of the bits comes ground a little thinner, allowing versatility right out of the box.

The beautifully ergo-dynamically shaped 19-inch handle is made of local North Carolina kiln-dried hickory lumber, straight-grained and smooth in the hand without any hot spots. Each handle is individually hand-sanded and carved into perfect balance and width. A handle that’s too thick will cause quick grip exhaustion, while a too-thin handle can create blister-causing tension in the hand.

Hoffman Blacksmithing craftsmen take great care in choosing and shaping each handle to match the axe head. Every stacked piece of hickory is matched and married to its corresponding axe early in the creation process.

Tools Of The Trade

Hoffman Blacksmith axes all feel untouched by modern manufacturing machinery. Gripping one of the dense hickory handles and feeling the weight of the axe head transports the wielder to a time of rustic, independent living, where a man’s tools meant the difference between honest work or hopeless destitution, food or starvation, living or dying.

To walk the workspace of Hoffman Blacksmithing is to note the absence of digital readouts, LEDs or computer-aided manufacturing. The traditional tools of the trade—anvil, hammers and tongs—sit in ordered preparedness at work stations around the shop. Instead of diodes and chips, the machines here are of cast iron and grease, with the clang and cacophony of pistons and gears harkening back to the early Industrial Age.

Liam and his small team of workers grind, shape and scrutinize each axe. They stop working on the axe if there is the slightest mismatch of handle to axe head or other failure to meet Hoffman standards. It becomes a “thrower” for Liam and his crew to use for break-time competition. They have targets outside for testing and stress release, with axes of all makes and models targeting the bullseye. Liam, not unexpectedly, is the reigning company champ.

Hoffman Blacksmithing now moves approximately 70 to 100 axes a month while expanding its production to supply other blade- and axe-makers with tools. The well crafted hickory handles are so popular that they’re available for sale as separate purchases, along with walnut wedges.

“My business is growing rapidly and has been for several years. We don’t have any plans to slow it down anytime soon. Catching up on our axe orders is our priority at the moment, but I plan to come out with an array of new products and train and employ skilled craftsman for years to come.”

Whatever Liam Hoffman puts his measured touch upon carries a certain craftsman gravitas that comes from years of experience that one would expect from a seasoned blacksmith. The maker and the company work to the standard of their motto: “It is true craftsmanship that transcends technology.” But Liam takes it all in stride, right now setting his sights on becoming an American Bladesmith Society Master Smith before he turns 25 years old, which would make him one of the youngest ever to hold the coveted title. To anyone who has hefted a Hoffman axe, Liam’s future success is not only predictable but inevitable.

This article was originally published in the Ballistic Magazine Feb/March 2021 issue. Subscription is available in print and digital editions at OutdoorGroupStore.com. Or call 1-800-284-5668, or email subscriptions@athlonmediagroup.com.